Also referred to as the Dumbo fish, Siamese fighting fish, or the Betta Splenden, the Elephant Ear Betta is a highly aggressive and territorial breed that will fight to the death if given a chance. For this reason, as with most Bettas, males should not be housed together due to their tendency to fight.

The Elephant Betta (or Dumbo Betta) is aptly named because of their huge fins and tail, which resemble the large ears of an elephant.

This unique and attractive appearance makes them a common choice amongst Betta fans.

Although upon first hearing about them, you may imagine them to be huge (after all, the word elephant usually insinuates something as being overly large), they’re actually average size for a Betta. Still, they can be recognized due to their enormous fins and tail.

The Elephant Ear Betta is an endangered freshwater fish native to the Asian waters of the Mekong Delta region.

These fish are a variant of the common Betta or the Betta Splenden and require the same care as most other Bettas of this species. The distinct difference by which they can be identified is their enormous fins and tail.

Due to their aggressive disposition, they have been bred as fighting fish through the years. Nowadays, they’re kept in captivity mostly due to their beauty – those extra flamboyant fins are truly special!

As it stands, the Elephant Ear Betta is currently listed as a vulnerable fish. Most of their natural habitat is highly polluted, with much of it being wiped out for construction and development purposes.

Native to the warm waters of Asia, these fish can be found in standing waters, such as floodplains, canals, and rice paddies in Vietnam, Thailand, and across the Mekong Delta region.

How Big Do Elephant Ear Bettas Get?

Studies have shown that Elephant Ear Bettas can grow up to a length of 6.5cm, though they may appear bigger than this due to their slim body and huge floaty fins. Therefore, you’ll want to keep them in a large enough aquarium for them to swim around freely and spread out their fins.

The Dumbo fish are slim in appearance with beautiful floaty fins. In captivity, they exhibit many beautiful colors, such as blues, greens, yellows, reds, and even pink.

In the wild, however, they’re mostly found to be grey, dull green, and brown, which help to camouflage them better with their surrounding habitat.

Most notable about their appearance, however, is their distinct fins and tail, which just so happen to be their namesake, so as you can imagine, they’re a pretty impressive size.,

Betta fish are generally famous for their beautiful floaty fins. However, this species takes it one step further – their fins are simply iconic!

With some species, the difference between males and females is obvious. However, with the Elephant Ear Betta, the only notable difference is their size.

Females tend to be smaller than males by about ¼ of an inch, so it’s not the most obvious difference, but if you’re experienced in keeping this breed, it can be easier to tell them apart.

As with all Betta Splenden, the females are generally just a little less impressive than the males, be it due to a less vibrant color or less flamboyant fins.

Despite being an endangered species in the wild, the Elephant ear Betta is a relatively common species in captivity. This variety of Betta can be found in many pet stores and are also widely produced by many reputable breeders.

This makes them a pretty common find, and for that reason, they’re not overly expensive. You can expect to find them at a similar price to the most common Betta Splenden varieties, at around $10 to $20 each.

Obviously, this price can vary depending on the rarity of the fish’s color and where you purchase them. For example, a rare colored Dumbo Betta purchased from a well-known breeder will be at a higher price than a common colored one bought from Petco or Walmart. 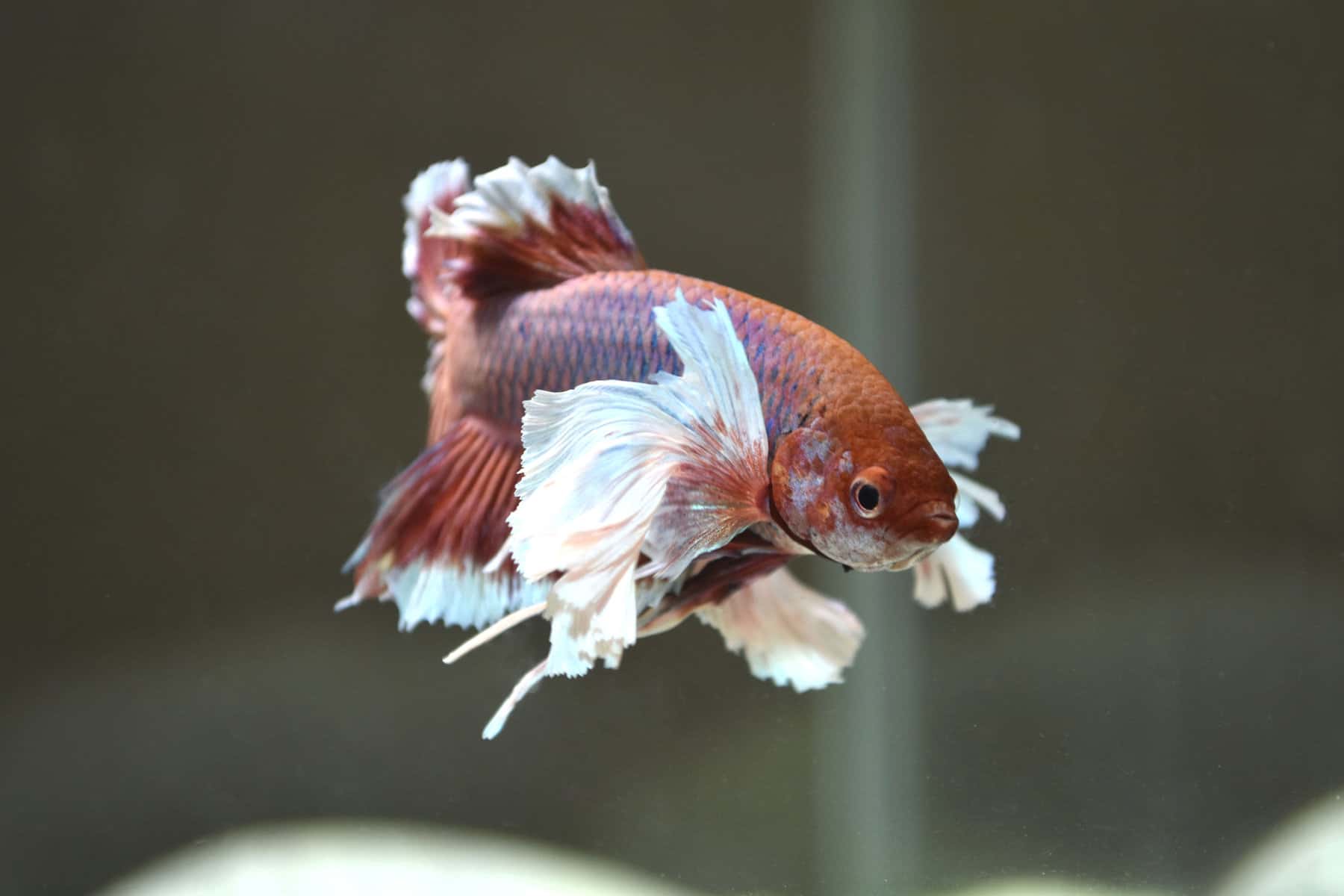 As with most Betta species, the Elephant Ear Betta is notoriously aggressive, so they should be housed alone. It’s common for them to exhibit aggressive behavior even to their reflections if they catch a glimpse of themselves in the tank’s glass.

If you’re adamant about keeping this fish as part of a community tank, you must ensure not to house two males together, be certain that the tank is big enough for all fish to have their own spaces to hide, and only house your Betta with suitable tank mates.

The Elephant Ear Betta Can Be Safely Housed With:

Of all of these, snails typically make for the best tankmates. They’re typically low-risk inhabitants who won’t bother your Betta but keep a close eye on the tank after introducing them.

Some Bettas tend to nip at the antennas of your little snails, so if you see this happening, remove them from the tank to keep your snails safe.

Breeding the Elephant Ear Betta isn’t too difficult, although, for first-time Betta breeders, it can require a bit of dedication and trial and error to get it right.

It might be disappointing if you simply put a male and a female Betta in the same tank and hope for the best – most likely, not much will happen. Instead, you’ll want to set up a separate breeding tank for them, without any decor or substrate, as the babies will be extremely delicate and fragile when newly hatched.

If you have any familiarity with Betta breeding, you’ll know that it’s the job of the male Betta to take care of the eggs, and as with the Elephant Ear Betta, this is no different.

You’ll want to keep him around to take care of the eggs, but as soon as the fry is hatched and swimming freely, it’s time to remove him and return him to his regular tank to prevent him from eating the babies.

Once the baby Betta gets large enough, it’s time to separate them and find new owners.

The Elephant Ear Betta is a variant of the Betta Splenden, so as with any Splenden, you’ll want to ensure they have a diet suitable for their carnivorous nature.

Flakes and Pellets suitable for Bettas typically give them enough variation in their diet, but to ensure they’re getting all the nutrition they need, live or frozen should be offered instead.

Avoid too many treats, though. Offering your Betta things such as bloodworms in addition to their regular foods can cause overheating, constipation, and many other health problems down the line.

The decor of your Betta set-up is important. Although recommended for every Betta breed, it is imperative to have no sharp or rough edges in a tank with the Elephant Ear Betta due to their fragile, floaty fins.

For this reason, hardscaping, such as rocks, should be smooth, round, and free of sharp edges or rough surfaces. So any you buy that might not fit this should be sanded down or eradicated from the tank.

Plastic plants can also tear up your fish’s fins, leading to long-term damage and infections. So you should either buy real plants or Betta-specific fabric ones that won’t tear up their fins.

As with all other Bettas, the Elephant Ear has a labyrinth organ, which enables it to breathe air from the surface of the water.

For this reason, they prefer to live in shallow waters, so you’ll want to choose a tank that is longer than tall to give them plenty of surface area to pop up and breathe from.

A common misconception with all Betta fish, and one which I’ve repeated a million times over, is that they can live in a small confined tank or bowl.

Whilst they may be able to survive in a small container, your fish will be miserable and will very quickly develop illnesses.

Bettas forced to live in these conditions typically have a much shorter lifespan than those living in larger, more spacious aquariums.

The recommended minimum size for a Betta fish is typically 5 gallons. However, with the Elephant Ear Betta having such big fins, you’ll want to give them a little more space to ensure they’re comfortable.

A 20-gallon is the recommended size to give this fish a happy home.

Water parameters are also important in ensuring the health and well-being of your fish. These should be replicated as close to those of their natural habitat as possible to ensure your Elephant Ear Betta stays happy and healthy.

How Often To Change the Water?

Frequent water changes are very beneficial to the happiness and health of your Betta, and doing water changes every 8 to 10 days is typically a very good idea.

Some experts recommend partial water changes every other day to keep your fish healthy and active. However, this isn’t completely necessary.

The large tails and fins of the Elephant Betta can be absolutely mesmerizing to watch.

If you want to house one in a home aquarium, you’ll want to ensure an appropriate tank setup so that these beautiful fins don’t suffer any damage.

So if this article has taught you anything, it should be how to take care of your Elephant Ear Betta and that you should probably choose one of these if you’re looking for a stunningly unique-looking fish.