It’s worrying when you notice something unusual about your betta’s behavior. But if you see that your betta is breathing heavily, that’s a real cause for concern.

But what could be causing your betta fish to breathe heavily? Is your betta dying? And what can you do to help your beloved betta buddy?

Read this guide to find out why your betta could be breathing heavily and learn what you can do to fix it.

Why Is My Betta Breathing So Heavily?

There are many potential reasons why your betta is breathing heavily or struggling to breathe. Once you’ve worked out the cause of the problem, you can set about fixing things for your pet.

So, let’s start playing betta detective and get your pet back on the road to recovery!

Fish need oxygen to live, and the most common reason why a betta fish could be breathing heavily is that there isn’t enough oxygen in the fish tank water.

So, why doesn’t the water contain enough oxygen to sustain your betta fish?

When the filter runs properly and efficiently, it will disturb the water. That disturbance allows atmospheric oxygen to be drawn into the tank, oxygenating the water.

Switch off the filter pump and disassemble the unit. Check to see if the filter media or the impeller are clogged with sludge or algae. If that’s the case, rinse the media and wash the filter box in tank water to clean it.

Test the unit in a bucket of clean water to ensure that the pump is working properly. If the unit is faulty, replace it as soon as possible.

If the filter is working properly, relocating it could solve the problem.

Consider placing the filter closer to the water’s surface or putting it in a spot where the flow is not blocked by ornaments or plants.

However, remember that the betta won’t appreciate a strong flow, so choose the new filter location accordingly.

You should inspect your filter unit and filter media as part of your regular tank maintenance routine.

Every couple of weeks, remove the media and rinse it in tank water. Check to see that the impeller is free from clogging and spins easily.

Replace the filter media periodically when it’s spent in line with the manufacturer’s guidelines.

Cold water typically holds more dissolved oxygen than warm water. However, bettas are tropical fish that need to live in warm water. But if your betta tank is too warm, the oxygen concentration in the water will be lower.

Bettas need a water temperature of between 76 and 80° F, with the sweet spot for a betta being 78° F. In addition, the water temperature should be as close to that of the room in which the tank is placed to avoid damage to the sensitive labyrinth organ.

Use an aquarium thermometer to check that the temperature in your betta’s tank is not too warm. Heaters fail sometimes, so if the temperature is not stable, it’s worth replacing the betta tank heater with a new one.

In addition, your betta’s tank should not be placed in direct sunlight or in a spot close to a heat source, such as a radiator or fire. That can cause dangerous hotspots to develop in the tank, which will stress your betta.

If there’s not enough surface water movement in your tank, the levels of dissolved oxygen in the water will be too low. You can help to provide more water movement by adding a simple air stone to the tank.

But did you know that it’s not actually the bubbles produced by the air stone that add more oxygen to the water?

Those bubbles look beautiful and can be used to create a striking aesthetic in your betta tank, as they make their way to the surface and pop. However, much of the air the bubbles contain simply vanishes into the atmosphere once they burst.

If there’s an issue with your water quality, your betta will certainly struggle to breathe.

A tank that’s not properly cycled or doesn’t have a filter installed will contain dangerously high levels of a chemical called ammonia.

Ammonia is highly toxic to fish, causing painful burns to the sensitive tissues in your betta’s gills and preventing them from working properly.

Symptoms of ammonia poisoning include:

Betta fish are very sensitive to poor water chemistry, and if you don’t rectify matters, your pet will probably die within a couple of days.

Use a high-quality aquarium water testing kit to check the water parameters in the tank.

If levels of ammonia and nitrites are above zero, you have a serious problem with your filter system. It could be that the tank is a new setup and the colonies of beneficial bacteria in the biological filter media that process ammonia are not fully established.

Alternatively, the filter pump might not be powerful enough to circulate the water throughout the tank and over the filter media. 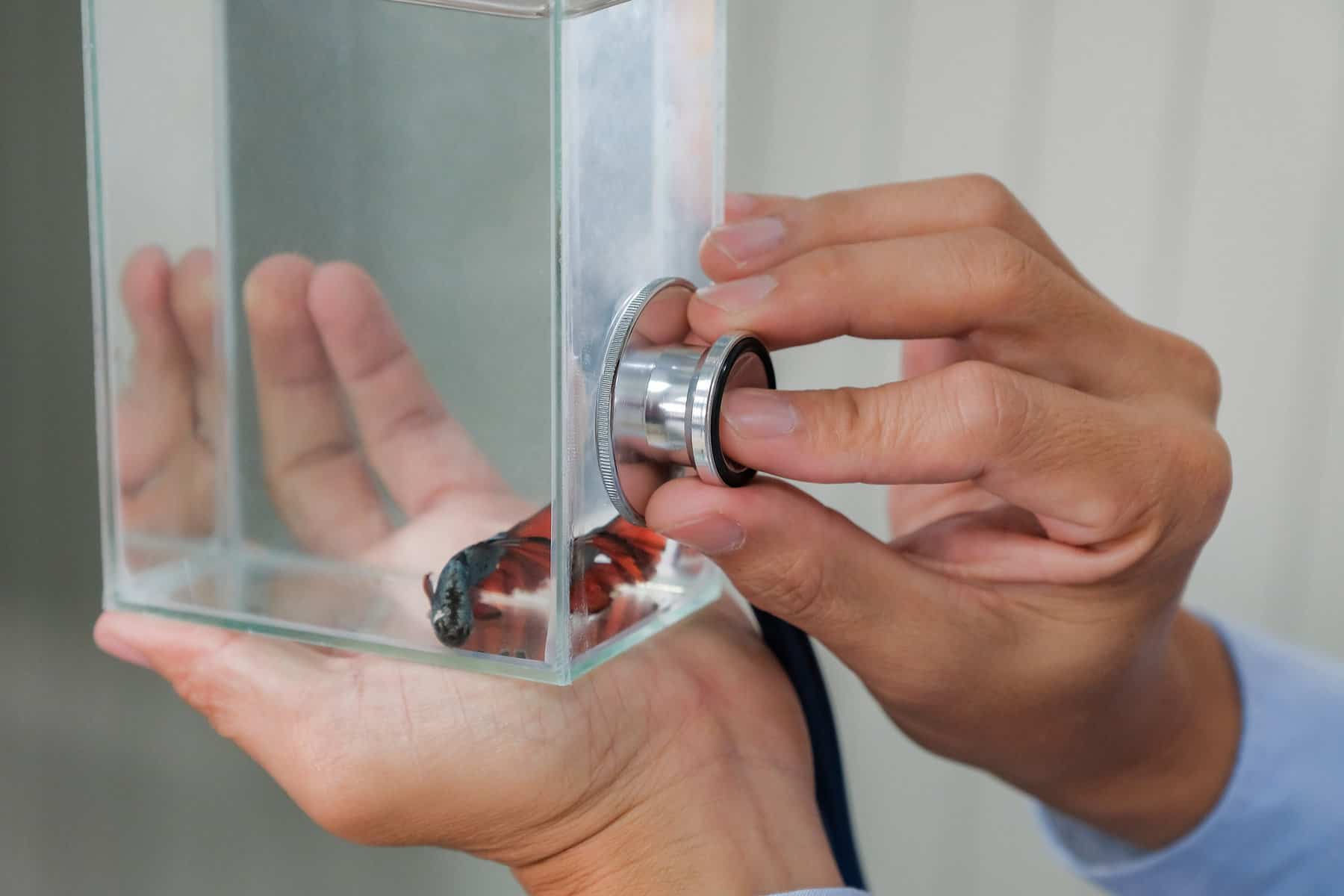 Carry Out a Partial Water Change

The first thing to do is carry out a partial water change of around 20%. That will remove some of the harmful chemicals from the water immediately, making the environment more comfortable for your fish.

So that you don’t shock your betta, don’t change too much water in one go. Instead, repeat the water change the following day if necessary.

Your filter should run at a suitable GPH (Gallons Per Hour) rate for your tank size. Ideally, you want the filter to pass the water through the tank at a rate of four times the tank volume.

If your filter isn’t powerful enough, you should replace it.

To prevent future problems, you must perform regular water changes of around 15% every week.

At the same time, remove fish waste and other debris from the tank before it has a chance to decompose and release harmful ammonia into the water. The most efficient way to do that is with a special aquarium vacuum cleaner that you can buy online or at your local fish store.

Remember to rinse the filter media in tank water every couple of weeks to prevent it from getting clogged with debris, and replace spent media in line with the manufacturer’s directions.

Check the water parameters in your betta’s tank every week to be sure that the environment is safe and healthy for your fish.

Some common fish diseases can cause heavy breathing in betta fish, as well as a range of other symptoms.

Each of these conditions causes different symptoms in betta fish, including heavy breathing. So, you’ll need to observe your fish carefully for other signs that could point toward a specific condition.

Many of these illnesses can be treated and cured if you spot the problem quickly. The best way to prevent diseases from getting into your betta tank is to quarantine new fish and plants for at least two weeks before adding them to your tank.

Bettas tend to be pretty solitary characters and can become aggressive if kept with too many tank mates.

However, if you have a very small fish tank and too much livestock, the levels of oxygen in the water will be low. In addition, all those critters will expire carbon dioxide into the water, making it even more difficult for your betta to breathe.

Overcrowding causes stress in fish, which could be why your betta is breathing heavily.

Finally, overcrowding could lead to high ammonia levels, especially if you have a small tank with a proportionately small filter system. Remember that high ammonia concentrations are extremely dangerous to your betta fish, and you’ll need to take action to fix the problem quickly.

The easiest way to prevent overcrowding is not to buy too many fish in the first place!

However, if your predicament is caused by the fish breeding and causing a population explosion, you could either upsize your tank or ask your local fish store if they would take some of your excess stock.

In this part of our guide, we answer some of the questions most often asked by concerned betta owners whose pets are breathing abnormally heavily.

Q: Why Is My Fish Breathing Heavily at the Bottom of the Tank?

A: There are several reasons why your fish might be breathing heavily at the bottom of the tank.

The problem could be caused by stress from external events happening outside the betta’s tank or as a result of bullying by an aggressive tank mate.

A new betta might breathe rapidly, owing to the shock of transportation to your home from the comparatively stressful conditions of life in a pet store.

Incorrect water chemistry in your betta tank can also be blamed for labored or rapid breathing in your fish. So, check the levels of ammonia, nitrites, and nitrates in the water and ensure that the pH and dGH levels are correct.

Q: Why Is My Betta Fish Having Trouble Breathing?

A: Like all aquatic animals and fish, bettas need to breathe dissolved oxygen from the water through their gills. If there isn’t sufficient oxygen available in the tank, your betta might have problems breathing.

Bettas can also breathe atmospheric air at the surface of the water through their labyrinth organ. If your betta fish is hanging around the surface, gasping for air, you lack dissolved oxygen in your tank.

Q: How Do I Know if My Betta Is Having Trouble Breathing?

A: If your fish struggles to breathe, you’ll notice that his sides and gills move rapidly as the betta pulls in more oxygen.

There’s more oxygen available around the top area of the water column, especially around the filter output valve. So, if your betta is hanging around there, he could be struggling to get enough oxygen.

Bettas breathe atmospheric air at the water’s surface through their labyrinth organ, and you’ll see your pet doing that on a regular basis throughout the day.

However, if your betta is always at the surface, gasping for breath, you have a lack of oxygen in your tank.

I hope you enjoyed our guide on why your betta is breathing heavily and what you can do to help your pet. If you found the information in the article helpful, please share it!

Your betta could be breathing heavily if the water in his tank is depleted of oxygen, your fish is stressed, or he has a disease.

Once you’ve identified the cause of the problem, you can set about rectifying what’s wrong by following the tips we’ve provided above.

Generally, if you keep your betta in a spacious, well-maintained tank with a few peaceful tank mates, he shouldn’t experience breathing difficulties.

Tell us how you helped your betta get back to full health in the comments section below!