Even if you’re not a beginner in the Betta keeping world, you may not be super familiar with the Copper Betta – A stunning breed with beautiful iridescent colors that make this fish stand out.

It’s fairly common knowledge that this hobby is popular with those who enjoy breeding Betta, typically because different combinations can result in new and beautiful fish and sometimes even prize winners!

Surprisingly (or, perhaps unsurprisingly, depending on your level of familiarity), it was this color betta (a metallic gold) that broke the record at the auction.

One breeder managed to produce a pair of them, and they were repurchased on Aquabid.com in 2003 for a whopping $1,000.

That said, whilst you may not be able to acquire a solid gold betta for very cheap, you may be able to own your own Copper Betta, as many breeders still stock them in hopes of one day getting the gold!

In recent years, copper and metallic colors have become immensely popular in the Betta keeping hobby. They’re highly sought after due to their beautiful appearance, but where did these fancy fish come from?

The Copper Plakat Betta fish is the most common type of metallic fish. This article will discuss the Copper Betta as the Plakat variety regarding tank parameters and appropriate care.

That said, the Copper Betta is a man-made cross-breed between the Betta Splenden and wild Betta, such as the Mahachai, Imbellis, or Smaragdina.

Although Plakat Betta is native to Thailand, Copper Bettas are actually a captive-bred species. They are the result of breeding half-moon Bettas and wild fighting fish.

This crossbreeding result in beautiful iridescent colors thanks to the genetics of the Wild Betta types (a feature which perhaps they adapted due to the murky waters within their natural habitats), but also beautiful fins and tails.

As their origins can be traced back primarily to Thailand, let’s consider this their natural habitat (Afterall, a species bred in captivity doesn’t actually have a home in the wild).

In the shallow freshwaters of Thailand, the pH of the water can range from around 6.9 to 8.2, so you’ll want to replicate this in your tank to the best of your ability.

That said, in the tropical climates of Thailand, there are sudden and sometimes extreme fluctuations in water availability, temperature, and chemistry, meaning that these fish have adapted to become quite a hardy species.

The shallow waters of Thailand contain plenty of vegetation; Bettas are commonly found in well-planted areas such as marshes, floodplains, and rice paddies.

Due to this life in the rice fields, they were discovered by humans and bred domestically.

The plants in these areas provide ample security and safety for the fish, shielding them from the bright light of the sun and each other.

As a territorial species, males will fight if they get too close, so living in heavily planted areas allowed this species to flourish, as often, it meant they could easily hide from one another to avoid conflict.

That said, some of the most common colors of the Copper Betta species are shades of blue, such as turquoise, steel blue, and metallic blue.

These stunning colors result from selective breeding, which, over time, has created a very beautiful, high-quality fish, all stunning in color with shiny metallic scales.

On average, they grow to about a length of 3 inches, and their color develops over time. This is why, if you buy the fish when they’re very young, their true color may remain unknown until they reach adulthood.

The Copper Betta also has a beautiful fancy set of fins, but this is very different from its wild-caught counterpart.

Are Copper Betta Easy To Care For? 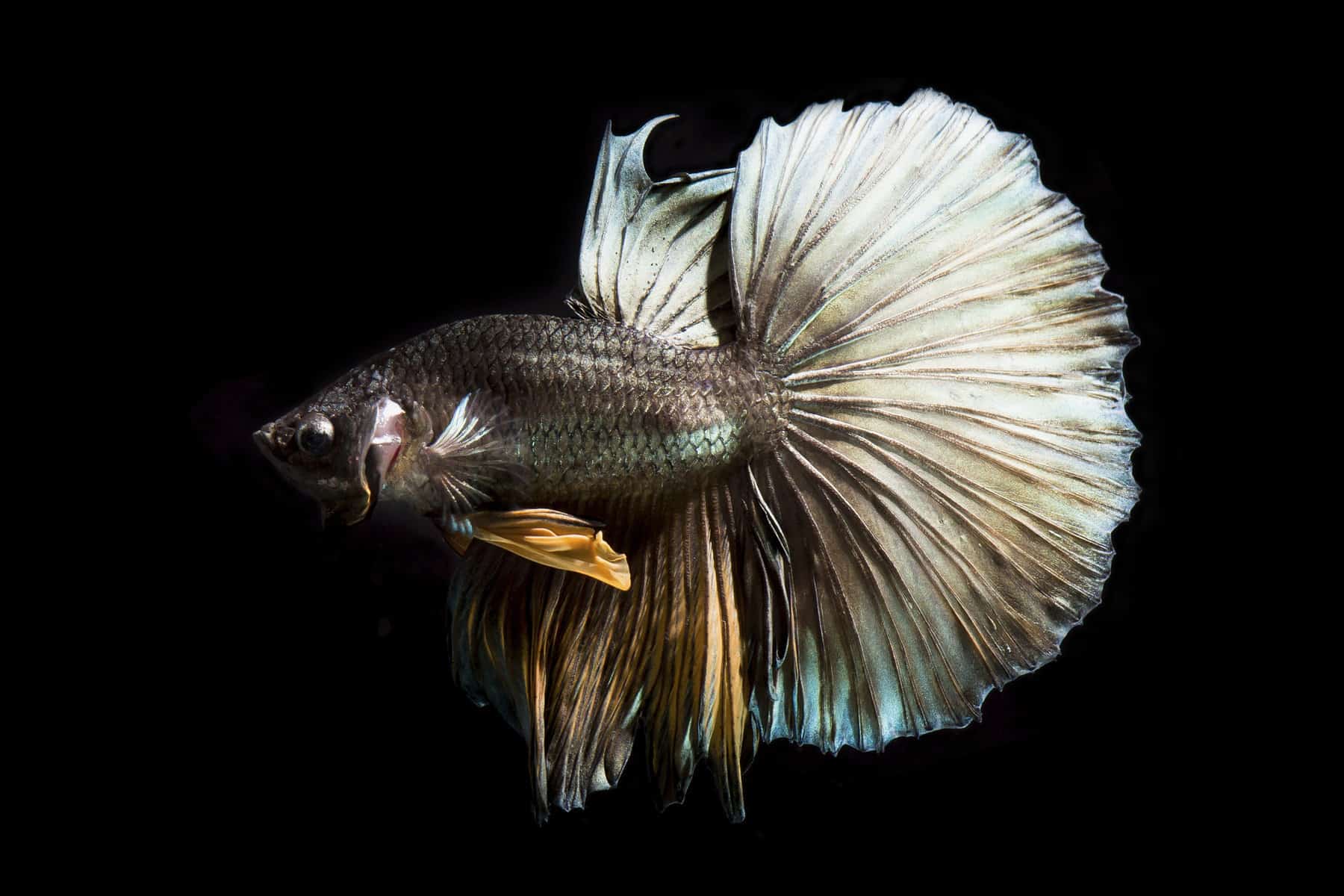 Like most Bettas, the Copper Betta is a hardy fish, so they’re not too difficult to take care of.

They don’t require much maintenance, and they thrive on the same diet as any other Betta fish, so as long as you know the basics of Betta care, you won’t find much trouble with the Copper variant.

As with most other Betta types, the Copper Betta is very territorial. They can be housed comfortably with quiet and calm fish, such as Plecos, Kuhli Loach, and other bottom-feeders.

Just be sure that these are big enough not to get mistaken for a snack and that there’s enough space in the tank for all tank mates to get out of one another’s way, as Betta generally like their own space.

Just as I’ve said in literally every other article about any species of Betta, refrain from keeping two males together, as they may fight to the death. However, two or three females should be fine to live together in harmony.

Males and Females are also fine to be housed temporarily for breeding purposes (as long as there’s only one male).

But after the eggs have been laid, the male and female should be separated, leaving the male with the eggs to care for them, as the male may become aggressive towards the female and injure her.

The sign that spawning has begun will be when you’re able to see a bubble nest on the surface of the water, a little nest created and maintained by the Male, which is why the eggs cannot be left with the female.

Once the eggs have been laid, they will hatch within a couple of weeks, and the male Betta again will take care of the fry until they’re able to swim.

Like all Betta, Copper Betta are a carnivorous species that enjoy pellets, flakes, freeze-dried and frozen foods, and live foods such as insects.

In the wild, Betta generally eats tiny invertebrates, small insects, and mosquito larvae, so being able to feed them live foods is a great way of entertaining them by engaging their natural hunting ability.

However, these can be more difficult and expensive to obtain than other Betta food types, so it’s really up to you.

When considering what decor to use in your tank, you’ll have to consider a couple of factors.

Copper Betta, like all Betta, have a labyrinth organ, meaning they’ll need to come to the water’s surface for air frequently.

For this reason, you won’t want to include any decorations that may hinder their ability to do this, keeping plenty of space at the top of the tank.

That being said, Betta like shade. In their natural habitat, they’re surrounded by plants that provide plenty of covers.

Keeping plenty of plants in the tank and spaces to explore and hide will help keep your Betta calm and happy if he’s out in open waters for too long without anywhere to retreat to, he can easily become stressed.

Don’t buy into what you see in the media!

Quite often, tanks sold for Bettas are just far too small. Without enough space to swim around and explore and without enough hiding spaces, your Copper Betta will become stressed very easily.

Generally speaking, a 5 – 10 gallon tank would be the best choice for a Copper Betta, or even larger if you’re planning on housing him as part of a community tank.

When it comes to keeping your tank’s water balanced and clean, one of the biggest things people think of is water changes.

For these, you must ensure a happy medium. Do water changes too frequently; your Betta will be at risk of getting stressed out but don’t do enough. The water quality can become deadly to your fish.

A good pattern to follow is to carry out 25% water changes once a week. This prevents the build-up of too many toxins in the tank’s water and minimizes your fish’s chances of going into shock.

If water hardness levels exceed 20 dGH, it can be incredibly painful, even deadly, to your fish, so keep this to the lower end of the spectrum.

Having a thermometer in the tank also allows you to keep a constant eye on temperature levels. Bettas struggle to digest food well if the temperature is too low.

As a result, you must maintain a comfortable temperature similar to what they would experience in the wild to ensure your fish’s happiness and health.

Can Copper Bettas Live in a Tank Without a Filter?

A common question asked of some more unusual species is, “Can this breed live without a filter.”

It’s a very fair question. Some domestic cross-breeds not found in the wild can be a little less hardy, so a filter is generally recommended to ensure the tank is kept clean.

In theory, though, Copper Bettas can live without a filter, but this is impractical, as the tank will very quickly get dirty, which can be detrimental to your fish, and would result in you having to clean it by hand every couple of days.

All in all, Copper Bettas are a gorgeous variation of Betta fish with dazzling metallic scales, resulting from years of cross-breeding to get what many would consider a perfect Betta variant.

Though their appearance is unique, the Copper Betta isn’t too different from other Bettas in terms of care, so if you have experience with other kinds of Bettas, this one may just be the perfect new pet for you!