Unlike marine fish and invertebrate species, your betta is a freshwater fish that lives in water with no salt (sodium chloride) content. However, you may have read in some articles about fish health that aquarium salt can be used to tackle certain diseases, for example, to treat a betta with fin rot.

Some people even recommend using aquarium salt routinely to give your pet extra essential electrolytes. Aquarium salt is cheap, easily available wherever you are in the world, and it never expires. That said, overdosing your tank with aquarium salt can be very dangerous and harmful to plants, as well as to your betta.

Now, that’s extremely confusing and conflicting information, especially if you’re a newbie to the hobby of keeping bettas. And we know that you want to do the very best that you can for your precious fishy friend. So, we wrote this article to take a closer look at the potential uses for aquarium salt with bettas, and how, when used properly, salt can be beneficial for your fish.

What is aquarium salt?

Aquarium salt is essentially the same as regular table salt in its chemical makeup. Both these kinds of salts have the chemical formula, NaCI, representing chloride and sodium in the ratio of 1:1.

However, the primary and critical difference between regular salt and aquarium salt is that the latter contains no additives. Aquarium salt is simply derived from evaporated seawater.

Can you safely add aquarium salt to your betta tank?

Provided that you don’t overdose the water, it is safe to use a small amount of salt in a betta tank to treat certain diseases. However, we don’t recommend that you routinely add aquarium salt to your betta’s aquarium; he doesn’t need it for general health, and you may actually do more harm than good.

Also, there are some circumstances when it’s not a good idea to use salt in your fish tank, including the following:

If you have a community tank, that’s a great idea, as bettas do enjoy the company of peaceful companions. However, if your setup contains scaleless fish such as the Pictus catfish, you must not use aquarium salt in your tank.

That’s because salt dries out the slime coat on a scaleless species, essentially removing the fish’s natural protection from external infections and parasites and weakening its immune system.

If your tank contains live plants, you should be aware that many delicate species don’t tolerate salinity. Hardier plant species such as Anubias, Java Moss, Anacharis, and Java Fern should be okay provided that the salt level is not too high.

Bottom line: if you want to use aquarium salt to medicate your betta, it’s recommended that you do so by placing him in a quarantine tank, rather than treating the entire setup with salt.

What about using regular or marine salt?

So, can you use regular salt instead of aquarium salt?

No! You should never substitute regular table salt or Epsom salts for aquarium salt. Both those kinds of salt contain coloring, flavor enhancers, and other additives that could harm or even kill your betta buddy. Using table salt can affect the water quality in the tank, as well as changing the pH level. Also, table salt won’t reload the water with natural electrolytes, whereas aquarium salt will.

The same applies to marine salt. That’s formulated for use in reef and marine tanks and can contain additives that could harm your betta.

So, always use only aquarium salt for medicating your betta.

What diseases can aquarium salt treat?

Aquarium salt is a useful medication in the treatment of many mild fish diseases, including:

Aquarium salt is best used as a first-aid treatment in the event that you don’t have any disease-specific medication on hand. If the salt doesn’t clear up the condition, you should always resort to using a proprietary disease-specific treatment.

How does aquarium salt work as a medication?

Aquarium salt basically kills parasites and bacteria by dehydration. When the salt content of the water is increased, water is extracted from those harmful organisms via osmosis, as the organism attempts to balance the concentration of salt on either side of its skin or membrane.

Because these organisms are so tiny, dehydration occurs faster than it does in fish, so the pathogens die before the host fish does. However, not all microorganisms are especially vulnerable to low levels of salt, which is why you should back up aquarium salt treatment with an over-the-counter chemical treatment.

Will aquarium salt alter the pH level of the tank water?

Aquarium salt won’t react with your tank water. When added to water, the two constituents of salt; chloride and sodium, become soluble. So, the oxygen and hydrogen molecules that make up the tank water won’t be altered by the addition of salt, and, therefore, it’s only the salinity of the water that will change, not the pH.

How to use aquarium salt to treat fish diseases

Although there are many kinds of salt, you must only use aquarium salt to treat diseases such as fin rot in betta fish.

We include three levels of dosage here that can safely be used as a first-aid treatment for such fish diseases. Begin with the lowest level of salt dosage, gradually increasing those levels if symptoms persist, and the condition doesn’t show signs of improvement within the first couple of days.

During the treatment, do not add more salt to the water. Salt doesn’t evaporate and won’t be removed by your filtration system, so if you add more, you run the risk of overdosing your betta. So, you must only add salt when performing water changes. For example, if you want to treat 10 gallons of water at Stage 2 treatment levels to combat Ich, you’ll need to add 5 tablespoons of salt. If you then carry out a 20% water change, you’ll need to replace 1 tablespoon of salt to the new water to keep the concentration the same.

Add 1 tablespoon of aquarium salt per 3 gallons of water. You can either pour the measurement of salt directly into the tank or dissolve it in a small amount of tank water first.

The level of treatment is very mild, but it can still be very effective in the treatment of mild fungal and bacterial infections. This low dosage also irritates the fish’s slime coat, stimulating the production of beneficial mucus that covers the fish’s skin and prevents microorganisms and parasites from reaching the betta’s body.

Keep your betta fish in that concentration of salt solution for four to five days. If there’s no improvement in the fish’s condition, you can increase the concentration to Stage 2 levels.

Add 1 tablespoon of aquarium salt per 2 gallons of water for a slightly stronger treatment strength.

This higher concentration of salinity can be used to treat a wider range of fish diseases, including Ich, fungus, and skin flukes over a period of 10 days. If there’s no improvement in the condition, increase the aquarium salt concentration to the next level, Stage 3.

Stage 3 is the most aggressive form of aquarium salt treatment that you can safely use for your betta.

Add 1 tablespoon of aquarium salt per 1 gallon of water. This is a very concentrated form of treatment, and it should not be used in tanks that contain scaleless fish species, plants, or invertebrates, including snails. 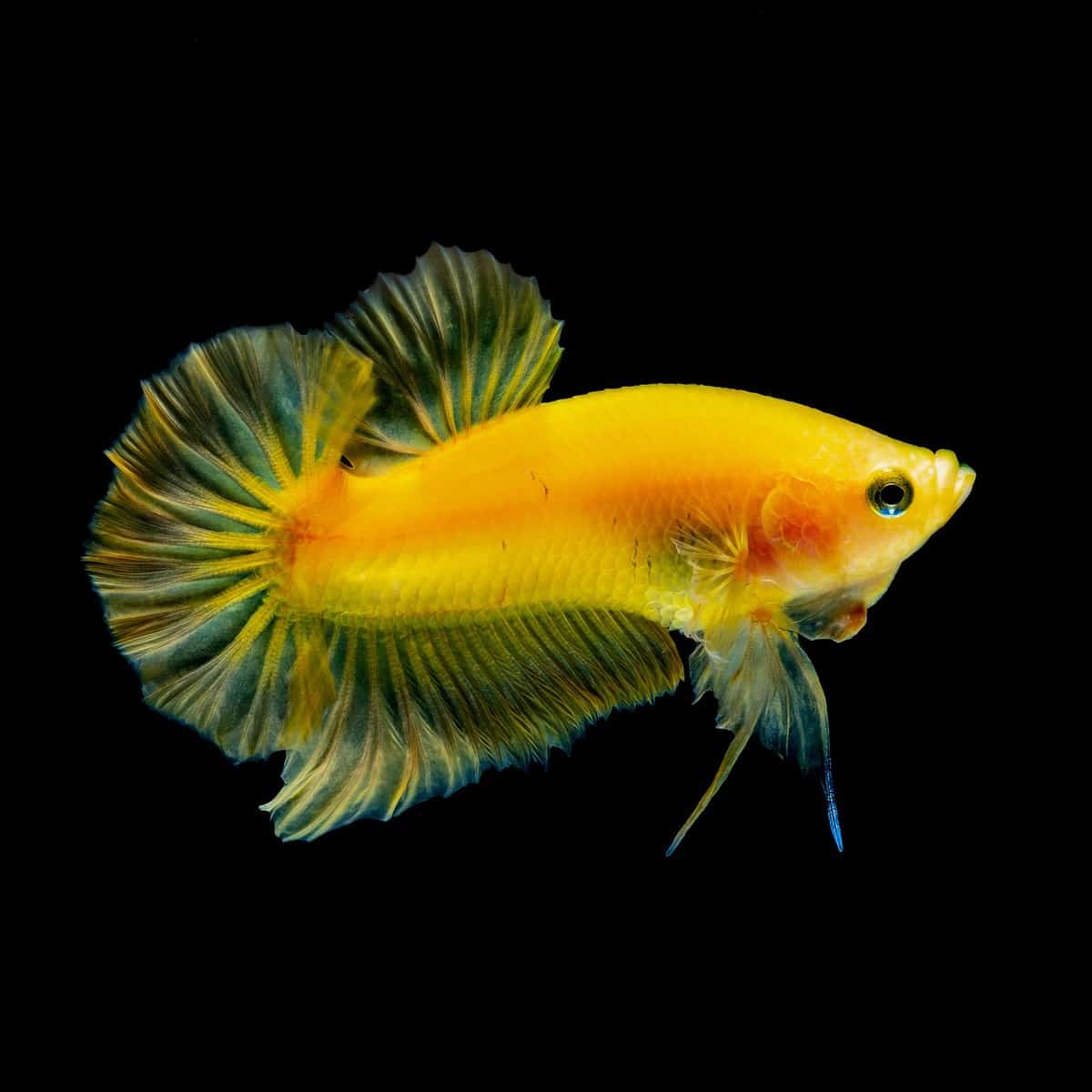 If you’re using aquarium salt to treat conditions such as betta fin rot, you should leave the salt in the tank until your pet appears to be healthy again. You then need to remove the salt by way of partial water changes.

If the problem recurs, restart the treatment, using the original salt concentration plus a little extra to up the anti and strengthen the treatment.

Can you use aquarium salt to treat new fish in quarantine?

It’s actually quite a good idea to treat any new fish that you’re keeping in quarantine before adding them to your display tank to be sure that the new arrivals are healthy and free from anything unpleasant that might affect your existing livestock.

Use the Stage 1 treatment level described above for two weeks to kill off around 60% of fish diseases that could potentially afflict new fishes. That strategy also works well for treating fish that pick up any minor scrapes and injuries. Rather than using a fish medication, aquarium salt can do the job. Salt can also be extremely useful when it comes to treating illnesses that you can’t easily diagnose.

Also, pharmaceutical companies in some countries are beginning to have restrictions imposed on certain antibiotic drugs to protect human and environmental health. So, in the future, aquarium salt could be your first go-to treatment for many of the most common tropical fish diseases.

If you don’t want to dose your entire tank with salt, you can give your betta a salt bath treatment instead. Salt baths enable you to hit whatever disease you’re treating with a much higher concentration of salt but for a much shorter timescale, which can be very effective at killing organisms such as flukes.

To avoid too much messing around and time-wasting, you should gather together everything that you’ll need before you start.

What you will need:

Finally, release your pet back into his aquarium to conclude his salt bath treatment.

Although we don’t recommend adding salt to your betta’s tank purely as an electrolyte boosting treatment, aquarium salt can be useful in tackling some of the common fish diseases that can affect your pet from time-to-time, such as fin rot and Ich.

Only use aquarium salt to treat your fish, not marine salt, table salt, or Epsom salts. Those other forms of salt can be harmful to your pet. Use our guide to work out how much aquarium salt to use per gallon of water, and be very careful that you don’t overdose your pet.

If the aquarium salt treatment doesn’t bring about an improvement in your betta’s condition within a few days, discontinue that and treat him with an over-the-counter product that is recommended for the treatment of the specific disease that your fish is suffering from.