Just like humans, our pets also have to eat, and whether we feed our fish live, frozen, pellets, or flakes, we need to ensure that the food they’re eating is in good condition and won’t bring them any harm.

I’m sure you wouldn’t want to eat something that’s out of date, for fear that it might make you ill, and that’s no different for your fish! The only issue is – they can’t read. So, it’s up to us to ensure that the food we’re giving them isn’t expired and won’t cause them any harm.

Worry not, though! This article will tell you everything you need to know about the expiration of fish food – will it expire? How long does it last? And is it okay to give fish expired food? Keep reading to find out!

Fish foods like pellets and flakes are both semi-perishable foods. And just like semi-perishables that we or any other animal in captivity eats, they can expire.

The majority of reputable fish foods sold in stores will have both a batch number and an expiry date on their packaging. The expiry date may also be referred to as the shelf life, the amount of time the food can safely be given to your pet, without worrying about it losing its nutritional value.

As pellets and flakes are dry foods, having the container open and unsealed will allow air into the packet, which can cause moisture to get to the food from the air. If it develops moisture, it can very slowly begin to decompose and rot, or, as we say when it comes to our food “go off.”

How Long Do Fish Pellets Last?

The majority of brands/types of pellets or flakes will last for approximately 3 months once opened. This is roughly the amount of time before too much moisture will have gotten to the fish food and made it bad for your fish to consume.

As mentioned before, packets of fish food will come with a batch number and expiration on it, so be sure to read the details carefully. As with some foods intended for humans, the package may have a best-before date printed on the box, but may also stipulate “use within three months of opening.”

The best-before date printed on these should indicate that the food should be used over a three-month period before that date is reached. After which it will become old and begin to lose its nutritional value.

How Do You Know If Fish Pellets Are Expired?

The date printed on the packaging is a good indication that the food may be expired. If you’ve also had it open for 3 months, it may be expired. However, if you’re unsure, it’s always better safe than sorry and it’s recommended to throw it out.

There are a few telltale signs that fish pellets may be expired, so here are some that may be a good indicator that your fish food needs to be put in the trash rather than your tank:

This one is specific to pellets that are supposed to slowly sink. If they don’t sink as quickly as they used to, and instead sit floating at the top of the tank, this could be a sign that the food has passed its expiry.

It might also sink to the bottom but move around, bobbing back up with some buoyancy.

Expired fish food will likely have a rancid odor to it. In my opinion, fish food doesn’t smell great anyway, so once it’s expired, it will really stink!

Even if the food looks the same as usual, if it smells different, this could be an indicator that it’s out of date and should be replaced.

Okay, just to be clear, before you test this out yourself, please don‘t eat your fish’s food!

You should be able to tell that your fish think it tastes bad as they’ll start avoiding it. There might be odd occasions where fish avoid their food, but if it becomes a common occurrence, then this is something you’ll want to take seriously.

As with any animal, the bad taste and smell can put them off completely.

The color of the fish food generally indicates how fresh it is, and once it’s past the expiration date, this color will begin to fade.

If it appears that the color of your fish’s food has changed, you should discontinue using it.

Bacteria causing the growth of mold may be present in the fish’s food from human negligence in the production, or once the packet has been opened.

Over time, moisture in the air reaches the fish food once it has been opened, which can lead to the growth of bacteria and mold. This can cause the food to cause illness in your fish if consumed.

As most fish food packaging instructs, you should keep the packet sealed, air-tight, and out of direct light.

If it begins to appear moist or clumpy, then you should discard the food and replace it with a fresh one before feeding your pet fish.

How Long Should You Keep Fish Food?

Fish food shouldn’t be kept for longer than typically 3 months after it has been opened, depending on what is stated on the packaging.

There may be a best-before date on the packaging, but this is more of a guideline. This means that the food won’t necessarily have gone bad if you haven’t yet opened it.

Is It OK to Use Expired Fish Food?

In short, yes and no. If the fish food is unopened and past its best-before date, it should still be okay to use but will have lost a lot of its nutritional value. 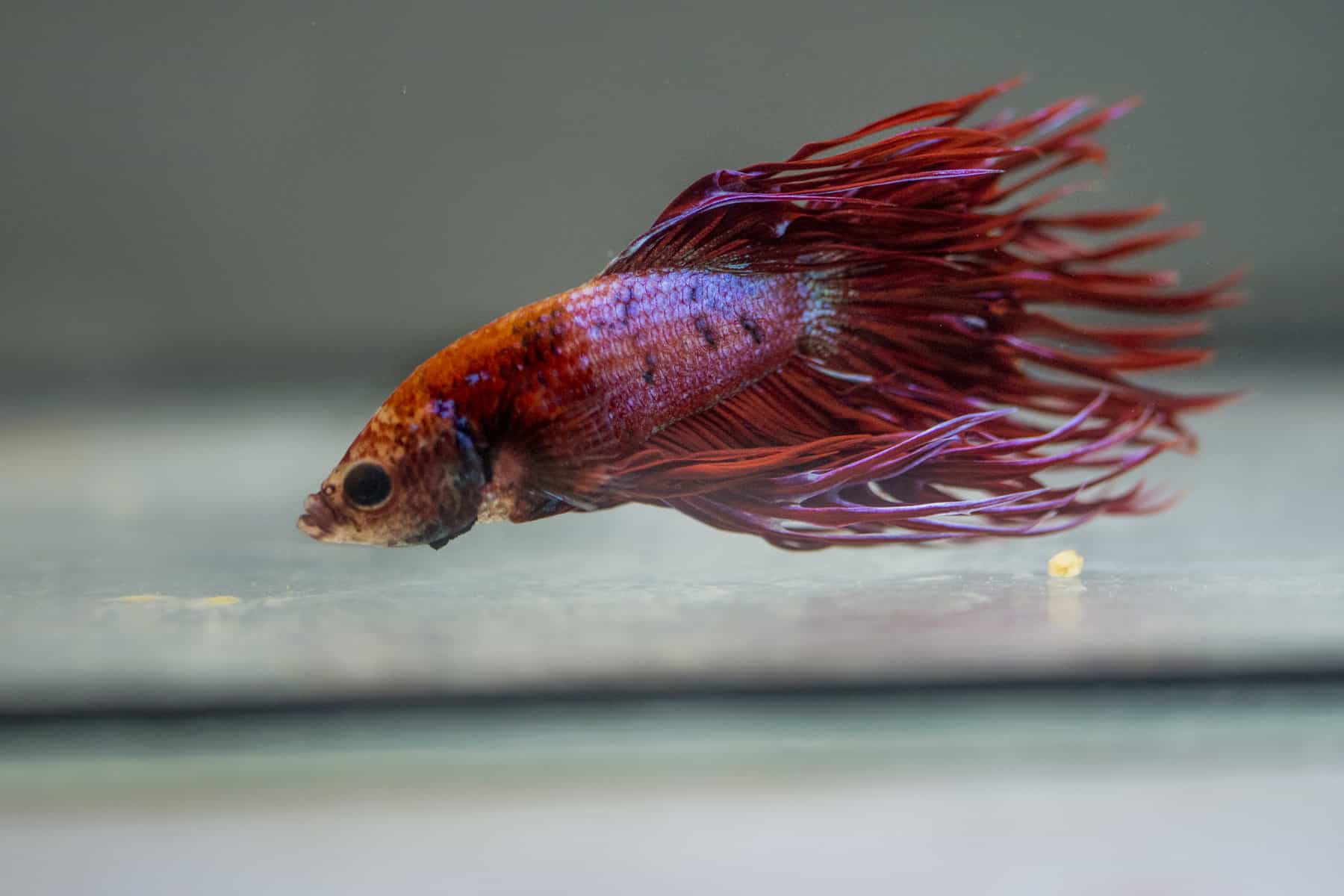 If you’re out of fish food and only have an expired pack, you may want to use it until you can buy some more. If you decide to do this, you’ll want to check for any signs of decay such as a gone-off smell, mold, or a change in color, before feeding it to your fish.

Past the expiration date, it won’t be a healthy food for your fish, but it won’t hurt them either.

In contrast, if the food is moldy, smelly, exhibiting signs of being expired, or if it has been open for more than 3 months, then this could make your fish ill.

Once your fish food has begun to decompose or become moldy, do not feed this to your fish. Instead, provide them with alternatives until you’re able to get to the store and buy more pellets.

Small amounts of cooked turkey and fish, and fruits and vegetables are all able to be given to your betta.

While these alternative options may not be the most nutritious choice, you can certainly give them to your fish to tie them over until you’re able to get your hands on what they usually enjoy.

Alternatively, it doesn’t hurt to fast your fish for a day or two, and in some cases, this can even be beneficial. So, if you’re going to get them new food soon, then they should be fine to skip a couple of meals for the time being!

I Accidentally Gave My Betta Fish Expired Food – What Should I Do?

If you gave your fish food that has passed its expiry date but was sealed and unchanged, then it should be fine. In this case, don’t panic, and simply get more food as soon as possible to ensure your fish is getting all of the nutrients they need in their diet.

If you have given your fish food that smells off, has been open for longer than 3 months, is moldy, or seems to have otherwise gone off, don’t panic.

This is unlikely to kill your fish, but it may make them sick. Monitor your fish closely, and if they begin exhibiting any signs of illness, consult with a veterinarian specializing in aquatics.

Hopefully, now, you’ll be able to tell when fish food is expired, be it pellets or flakes, many of these signs are the same. In terms of live food, however, it’s a lot easier to tell if it’s expired… if it’s no longer live!

So, if your fish food smells, appears moldy or moist, or otherwise just looks off, remember that it’s always better safe than sorry, and to get your little fishy friend some new food as soon as possible.

The best-case scenario of expired fish food – your pet isn’t getting all the nutrition he needs, and this isn’t a great scenario either! So, if you’re concerned that your fish food may be expired, get him some more.