Bettas have lots of quirks, and each fish has its own distinct personality. That’s one reason why these beautiful fish make such great pets. After all, not only do they look stunning, but betta fish are actually very interactive with their owners. You can even train your betta to perform simple tricks! Who knew that a fish could be such a fun pet to own?

Betta fish have a reputation for being greedy when it comes to food. So, if you notice that your betta is spitting out his food, it’s understandable that you’ll be concerned about your pet.

In this helpful article, we look at possible reasons why your betta fish might be spitting out his food, and we give you some practical advice on how to help your betta buddy.

Bettas can be very greedy, gobbling up anything that lands on the surface of the water in an instant.

However, a betta’s stomach is tiny. In fact, your pet’s tummy is roughly the same size as his eyeball. So, when your betta gobbles up a tasty pellet, he might struggle to even swallow the food. Hence, he spits out the food to allow it to break down in the water before eating the meal in smaller portions.

The same principle applies to live and frozen foods, such as bloodworms. You may see your betta grabbing a worm and appearing to swallow it, only to spit it out again. But watch closely, and you will most likely see your pet biting small chunks off of the worm with his tiny, sharp teeth and eating it in small portions.

When the food lands in the water of your pet’s tank, he’ll immediately grab the meal and try to swallow it. As soon as the dry food enters your betta’s mouth, the food begins to swell. Your pet discovers that he can’t swallow that large lump of food, so he spits it out.

You can help your fish by pre-soaking dried and freeze-dried fish food in a little bit of tank water before feeding them to your fish. Pellets typically swell to several times their dry size, and the same is often true of freeze-dried bloodworms. Pre-soaked food is already hydrated, so your fish will be able to eat it without having to regurgitate it, especially if you crumble the food into manageable sized portions before offering it to your pet.

One common problem for betta fish is digestive issues. That can lead to your betta refusing food altogether or spitting it out. So, what health problems could be causing your pet to spit out his food? 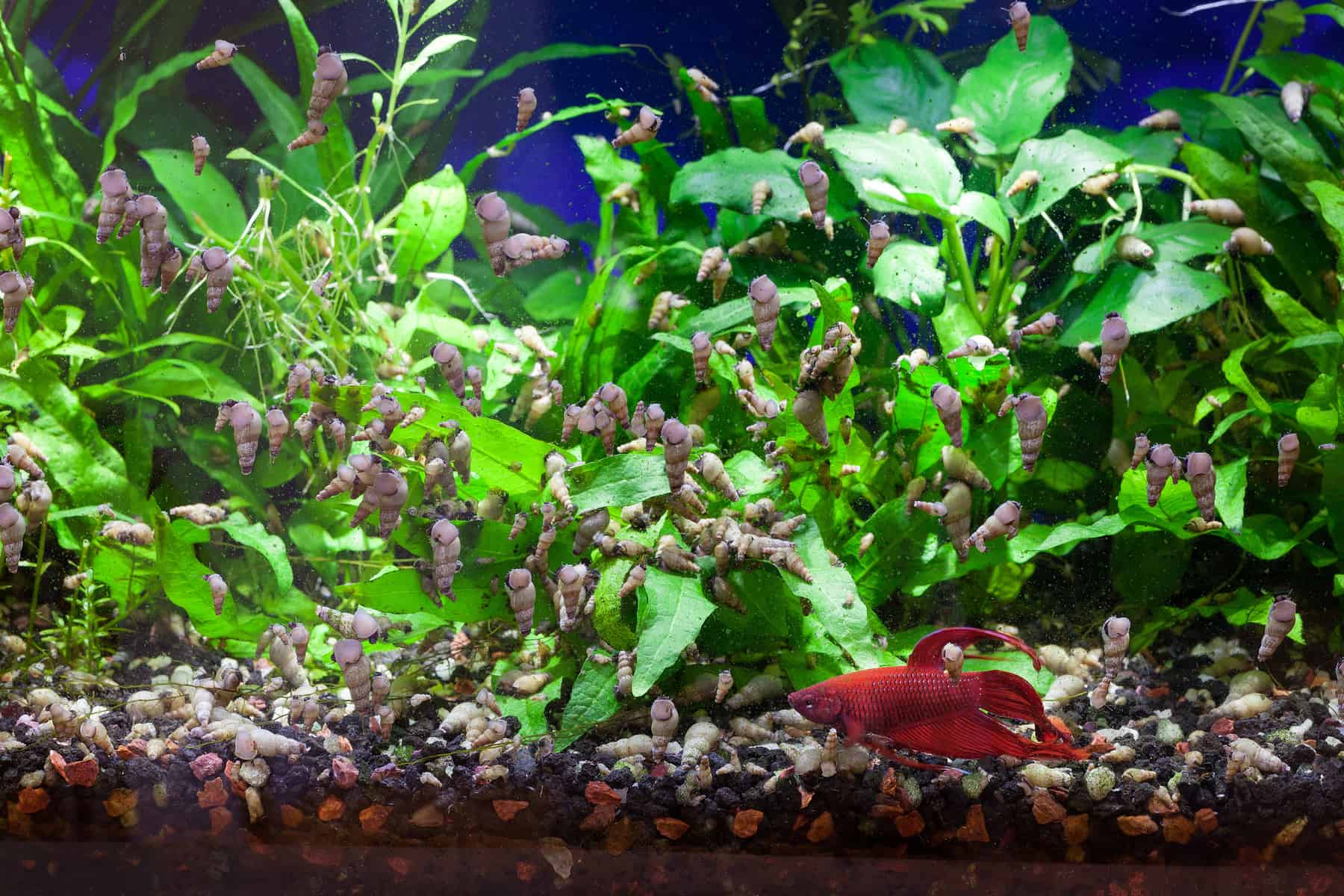 Constipation is probably the most common digestive issue for betta fish. Luckily, a change in diet can be a quick and effective cure for constipation, but let’s find out more about this worrying condition.

Symptoms of constipation in bettas

Constipation is pretty easy to recognize in betta fish.

The most obvious symptom is a bloated belly, which is easy to spot when viewing your pet from the top and from the sides. If the fish’s whole body is swollen and his scales are sticking out so that he looks like a pinecone, the condition is most likely a very serious condition called dropsy. You can read a full guide to diagnosing and treating dropsy in our article at this link.

A constipated betta won’t be passing any food through his digestive system, so if you notice that your pet isn’t defecating, he is most likely constipated.

In very severe cases where constipation is allowed to go untreated, the condition may develop into another serious problem called swim bladder disease.

As the bloating caused by constipation increases, excessive pressure is placed on the betta’s organs, including the swim bladder. That causes problems with the fish’s ability to balance, swim, and remain upright in the water. In many instances, you’ll see your fish trying to swim upside down or even on his side. Usually, once the bloating is resolved, the pressure on the swim bladder is relieved, and he can swim normally again.

What causes constipation in betta fish?

The usual cause of constipation in betta fish is overfeeding. (You can read our comprehensive guide on how much to feed your betta at this link.)

Even if you offer your pet the best betta fish foods on the market, too much of a good thing is very bad for your fish. Many fish species can comfortably nibble on food all day without suffering any ill effects. However, bettas are very sensitive to overfeeding, and even following the manufacturer’s directions on many fish food containers can result in overfeeding.

Some packaging of food for betta fish recommends offering your betta whatever your pet will eat within two to five minutes. That’s too much for a betta fish! Ideally, you should feed a full-grown adult betta around two to three pellets or three to four bloodworms twice per day.

How often do you feed betta fish?

If possible, you should feed your betta twice each day. Two small meals are much better for your pet’s digestive system than one large portion.

It’s also very important to have one day per week when you don’t feed your betta at all. That might seem cruel, but fasting is actually good for your pet, as 24 hours without food allows the waste in your fish’s digestive system to pass through before more food is added to the load. That helps to prevent constipation and bloating, which may lead to your fish spitting out food.

How do you cure constipation in bettas?

The quickest and easiest way to cure constipation in betta fish is by fasting your pet for at least 24 hours and then feeding him some live or frozen food. Offering your fish a shelled, blanched pea can also help to get things moving again, and your betta will enjoy the treat too.

The inclusion of frozen or live food in the diet can help to prevent your pet from becoming bloated and spitting out his food. 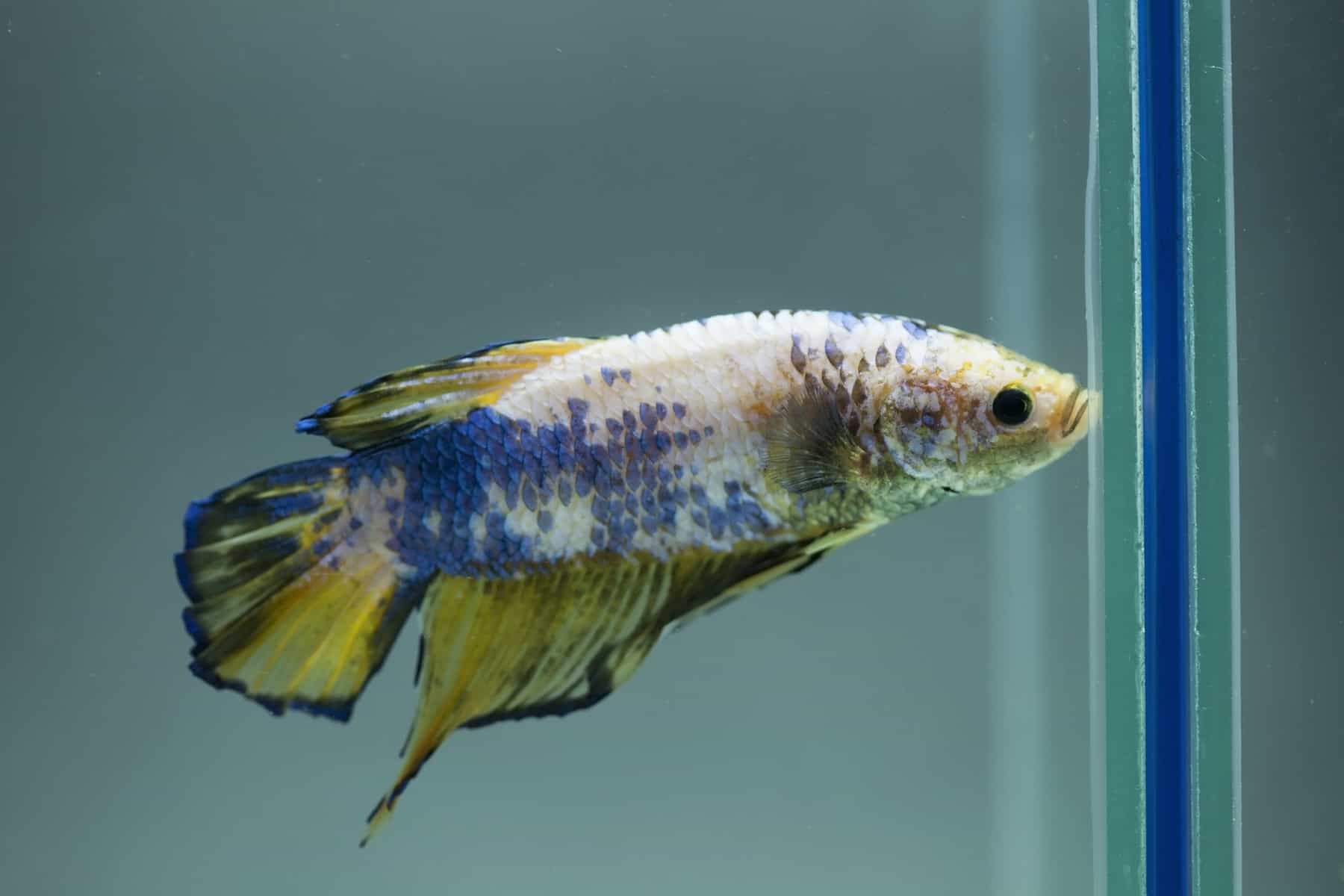 What food is best for bettas?

You can make sure that your pet doesn’t struggle to eat his food or suffer from digestive problems by feeding him the right kinds of foods.

Generally, dried foods such as pellets, flakes, and freeze-dried products don’t contain much moisture and swell considerably when the fish eats them. Many of these foods are padded out with fillers, including grains and rice. Betta fish are primarily carnivorous, and they need a diet that’s rich in meaty protein. So, when your fish gets a mouthful of dry flakes that don’t contain the nutrition that he needs, he may start spitting out food.

In the wild, betta fish eat insects and insect larvae, as well as a little bit of plant matter. That diet offers the fish the protein that he needs, as well as providing roughage in the form of the insects’ exoskeletons and wings.

You can replicate that diet in captivity by offering your betta frozen foods such as bloodworms, brine shrimp, daphnia, and mosquito larvae, as well as some good quality, floating betta pellets.

Many bettas that you buy in pet stores are juveniles. Generally, young betta fish are fed a diet that consists exclusively of dried food. So, when you bring your new pet home and offer him a diet that’s mostly made up of flakes or pellets, the betta may not even realize that what you’re giving him is food. Also, it could be that the pieces of food are simply too big for your pet.

One way to get around the problem is to start by mixing live food with frozen food. When your fish is accepting that, you can introduce a small number of pellets or flake foods. It doesn’t usually take too long before a juvenile betta fish gets used to his captive diet and stops spitting out food.

Sometimes, betta owners become concerned when they see that their pet is spitting out his food. Most times, that’s because the fish has literally bitten off more than he can chew!

As long as your pet is still eating and showing interest at feeding times, there’s not usually anything to worry about. Feed your betta a high-quality, nutritious diet that includes plenty of meaty protein and a small amount of vegetable matter, and make sure that you offer your pet small pieces of food that he can cope with.