The Betta Unimaculata is a very interesting fish in both appearance and character. In fact, this fish hardly looks like a type of betta species and might actually be mistaken for a type of killifish instead!

However, the Betta Unimaculata is a great choice of wild betta to have in your home aquarium if you’re looking for something other than your typical Betta Splendens.

Keep reading to find out everything you need to know about wild bettas, Betta Unimaculata, and how to keep one of these beautiful fish in your own freshwater aquarium! 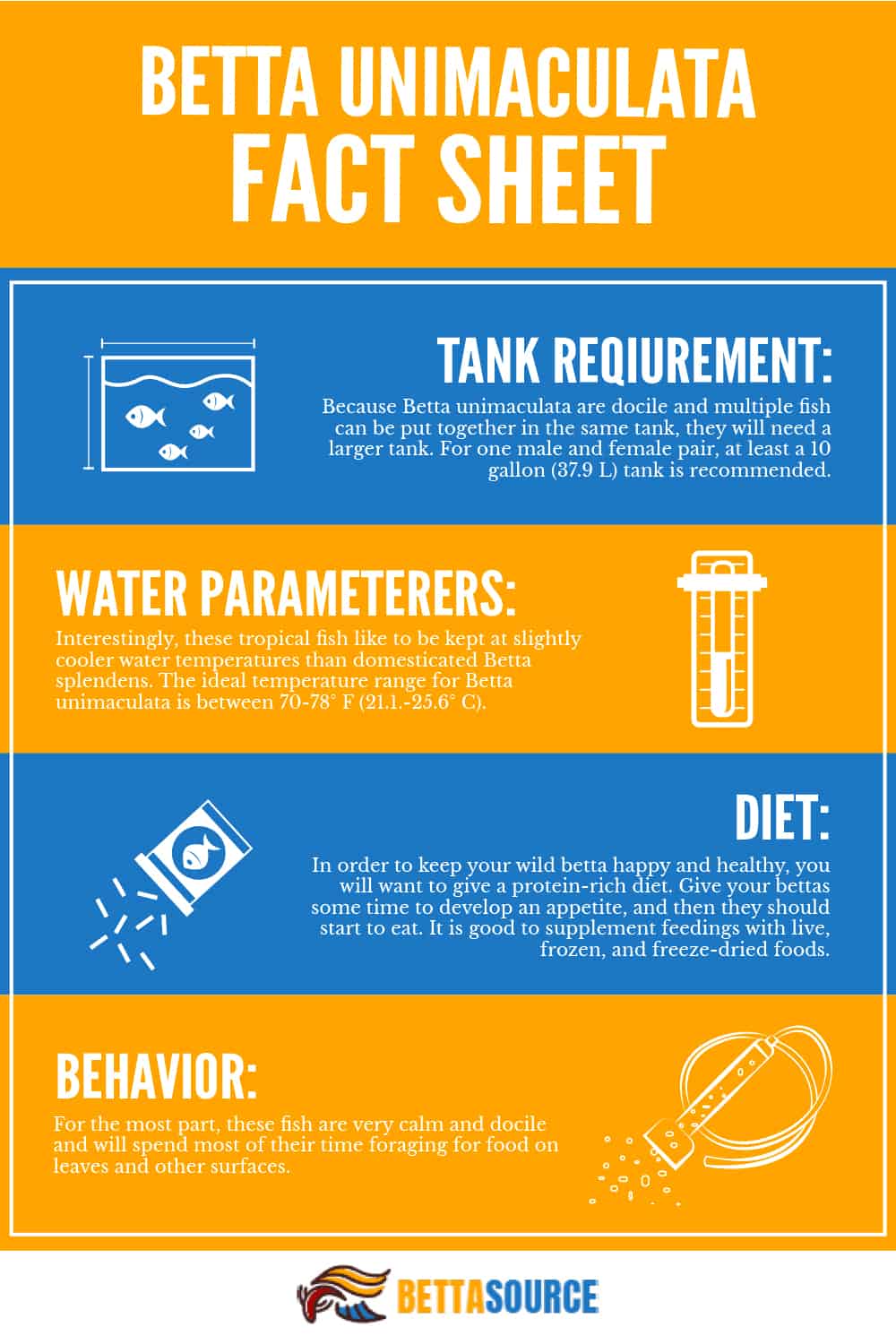 The Betta Unimaculata is sometimes referred to as the Howong betta due to its native range, though most hobbyists refer to wild bettas by their scientific names.

Betta Unimaculata is part of the Betta Unimaculata species complex, which houses several other similar-looking bettas; they are placed in a complex together due to being nearly identical and being found in similar environments.

One suspected variety of Betta Unimaculata, Tawau, is now its own species of Betta Ocellata.

The Betta Unimaculata comes from very remote regions of Borneo in Southeast Asia. More specifically, these fish can be found in the Kajan and Howong water drainages in the province of Kalimantan Timur.

They tend to live in sections of forest streams with clear water over sandstone rocks and no algal growth.

Though remote and in a limited range, regional variations of Betta Unimaculata have been reported and are able to hybridize as they are still the same species.

Coloration largely depends on the locality of the fish, though most colors are muted greys and browns with splashes of blues and greens.

Females are very understated in appearance and generally smaller. Typically, these female fish are entirely brown or grey with little to no flashes of color. In addition, females generally have two dark longitudinal stripes.

Male Betta Unimaculata are much larger and colorful. Their heads are even broader, and their fins are even more extended.

The Betta Unimaculata is not a common species in the aquarium hobby, though betta specialists will be especially drawn to this species.

Because Betta Unimaculata are docile and multiple fish can be put together in the same tank, they will need a larger tank. For one male and female pair, at least a 10-gallon (37.9 L) tank is recommended.

These bettas do not require a substrate. However, a sand substrate covered in leaf litter will create blackwater conditions, keeping pH down and providing fish with extra coverage.

Betta Unimaculata will enjoy lots of driftwood and floating plants to keep them covered and hidden, as they can be a little skittish at times; dim lighting with a tight aquarium lid may also help.

As we’ll discuss later, some hobbyists actually keep multiple Betta Unimaculata in larger groups, but this would require a larger tank in excess of 40 gallons (151.4 L).

Interestingly, these tropical fish like to be kept at slightly cooler water temperatures than domesticated Betta Splendens. The ideal temperature range for Betta Unimaculata is between  70-78° F (21.1.-25.6° C).

Like other bettas, they enjoy more acidic conditions and need a pH between 5.0-7.5, which can be adjusted through tannins.

Other than that, these fish are very hardy and can withstand most water parameters as long as they’re close to the ideal ranges and at constant values.

A sponge filter will provide the best filtration to keep water flow minimal while creating a place for beneficial bacteria to spread.

In the tank, the water should be kept at a consistent, steady temperature of 23 degrees Celsius, or 74 degrees Fahrenheit. Though the Unimaculata is able to adapt to most aquariums due to their high tolerance to high temperatures and pH levels.

You might be surprised to learn that the lighting in the tank for your Betta Unimaculata must be rather dim. Keeping a lid on the aquarium, a dim lamp, and plenty of plants to block this light makes for an ideal set-up.

While live plants are often just highly recommended for Bettas, when it comes to the Unimaculata, an abundance of live plants is necessary in order to block light, prevent insects such as mosquitoes from getting in, and provide plenty of hiding places for your fish.

The lighting in the tank also contributes to temperature control. As with any Betta, the water temperature and parameters should be maintained in order to prevent bacteria growth, which can cause illnesses in your fish.

The substrate used in your Betta Unimaculata tank is very important. Sand will give the Betta more space to burrow and hide, and wood shavings are sometimes used as they’re easy to clean.

The number of live plants and algae building up in this tank can be necessary to keep ammonia levels from getting too high).

Sand or sand-like mixture is recommended, however, preferably one with high fibre content. Again, this is because peat substrates can lead to the growth of bacteria and fungus, which can cause ammonia build-up and, ultimately, make your fish sick.

In many cases, leading to the death of your beautiful and beloved pet.

Betta Unimaculata is one of the more docile betta fish available in the aquarium hobby. They are also peaceful fish.

Keep in mind that they like to be kept at cooler temperatures than most tropical fish, so pick tank mates accordingly.

However, because these fish can be so shy, most hobbyists recommend leaving them as the only species in the tank in pairs or small groups.

Larger and more active fish can quickly stress out your Betta Unimaculata, causing them to never come out from their hiding spots.

If you really want to give your Betta Unimaculata some company, then it is best to create a biotope setup where you pick species that naturally occur in the same habitats as these fish.

Some good choices might be small minnows or loaches found in the Kajan and Howong water drainages and similar water conditions.

Remember that there are different variations of Betta Unimaculata based on locality and that they are able to hybridize! Choose your pet fish wisely, especially when interested in a compatible pair. 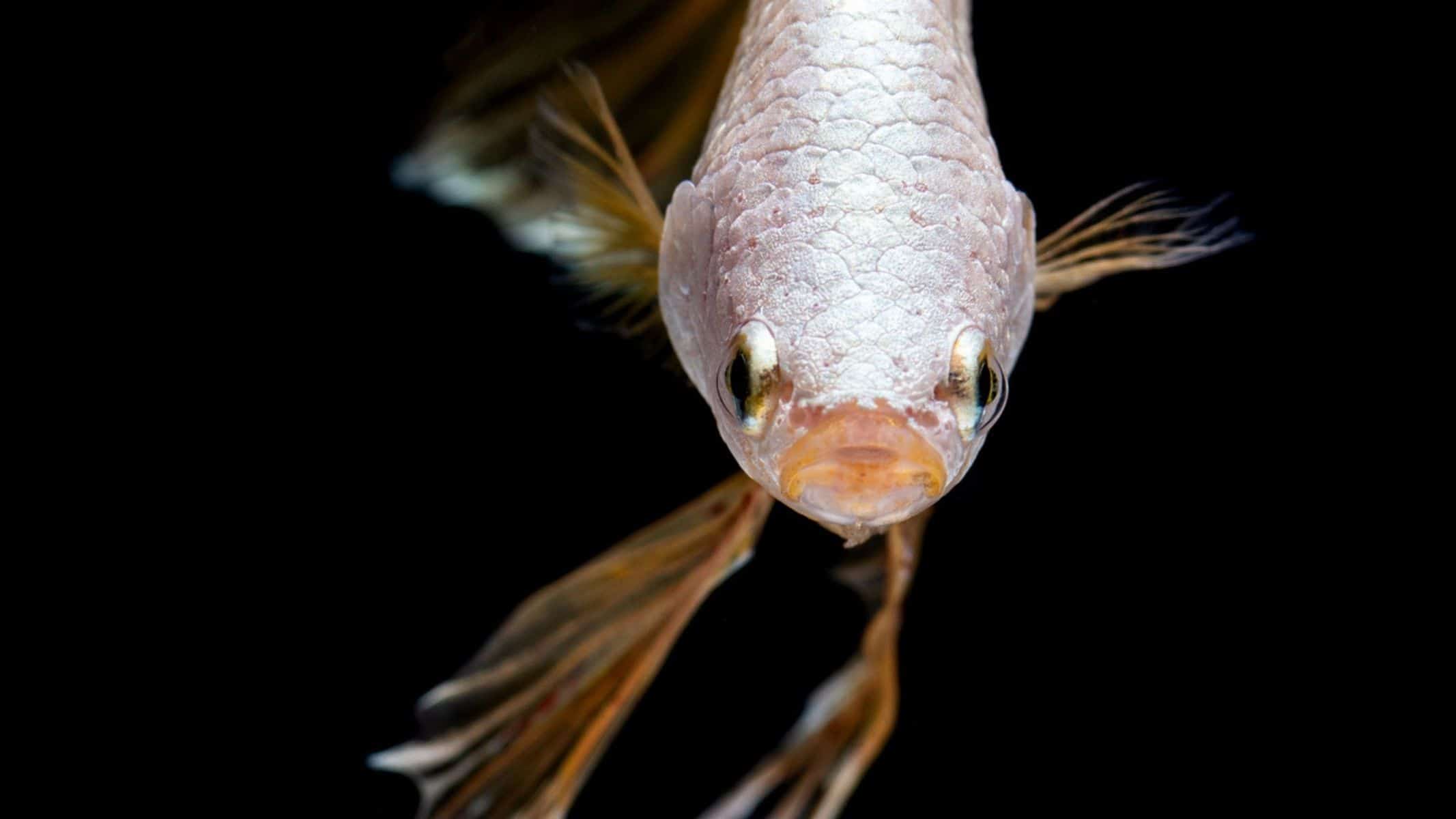 Mostly, these fish are very calm and docile and will spend most of their time foraging for food on leaves and other surfaces.

Like other species of Betta, Betta Unimaculata is a labyrinth fish capable of breathing atmospheric air if water conditions deteriorate. This means they should always have access to the surface of the water to breathe.

In addition, these fish can also be jumpers. A tight aquarium lid should always be secured on the tank to prevent accidents.

It is not unheard of for these fish to naturally breed in the display aquarium on their own, so be on the lookout for mating signs and potential fry!

Betta fish are largely carnivores, though they will nip at leaf matter and other detritus every now and then. In order to keep your wild betta happy and healthy, you will want to give a protein-rich diet.

In the wild, these fish mainly eat insects, insect larvae, and other small invertebrates they might find floating in the water.

Hobbyists that are purchasing wild-caught fish can initially have difficulty getting their fish to accept aquarium food, like betta flakes, pellets, and freeze-dried and frozen foods.

However, give your bettas some time to develop an appetite, and then they should start to eat. At the same time, it is good to supplement feedings with live, frozen, and freeze-dried foods.

Make sure you don’t feed your betta fish too much, as Betta species are prone to constipation and obesity!

Betta Unimaculata is a very interesting species of betta fish as they are mouthbrooders. This is when one of the parents carries the eggs and/or the fry in its mouth for protection.

In order to breed Betta Unimaculata, you will need an established pair. This can be difficult as not all females will accept the male you introduced.

Unless you have a larger tank that can hold several Betta Unimaculata and wait for them to pair, purchasing an already compatible male and the female couple is usually recommended.

Once this pairing is established, the fish will intertwine and mate. Once the eggs have been fertilized, the female will help move the eggs into the male’s mouth.

During this time, it’s very important that the male stays calm and undisturbed. If he becomes stressed, there is a good chance he will swallow the eggs, and the brood will be lost.

For the most part, females Betta Unimaculata will leave the male undisturbed and can stay in the tank with the male. However, if you have an especially annoying female, she should be removed from the tank for the brooding duration.

After about 2 weeks, the fry will hatch; removing the fry from the tank is recommended for a greater yield.

Fry can be fed larger foods immediately, though they should not be fed too much as this can easily cause intestinal issues; water changes should also be continued to keep water quality pristine.

We all know the many shapes and sizes that Betta Splendens comes in, but what about all the other species of Betta that can go in the home aquarium?

Betta Unimaculata is a unique betta that has a long, snake-like appearance and keeps young in its mouth! These fish are much less aggressive than other bettas and can be kept in larger groups.

If you have questions about Betta Unimaculata or other wild betta species or have kept this interesting fish in your aquarium before, don’t hesitate to leave a comment below!