Many hobbyists know that male betta fish can’t be put together and some might even know that females don’t do so great in groups either, but males and females must surely get along right? Well, it’s not that simple.

Though male and female betta fish need to be together and interact in order to breed, more often than not, this will lead to dead or injured fish if attempted by a beginner. Never try to house any color, variety, or sex of betta together without doing research first!

Keep reading to find out why you probably can’t keep male and female betta fish together, and how you could go about trying to keep them together in your freshwater tank in the future!

Reasons for putting a male betta with a female betta

There is really no other reason to put a male betta with a female betta in the same tank unless attempting to breed.

We all know that betta fish are solitary fish that like to set up territories in the aquarium setting. This isn’t any different in their natural habitat. However, there’s plenty of space for males and females to come and go and coexist in their own separate territories.

In their natural habitats, these fish might only ever encounter each other during spawning seasons. Also, consider that these environments are densely packed with vegetation and there’s room for the fish to swim to and hide if things start to go wrong. In the aquarium, this isn’t possible.

If attempting to put male and female fish together in the same tank for purely aesthetic choices because of their beautiful colors, then this will almost certainly result in the death of one or both of the fish.

Can you put a male and female betta fish together in a large enough tank? 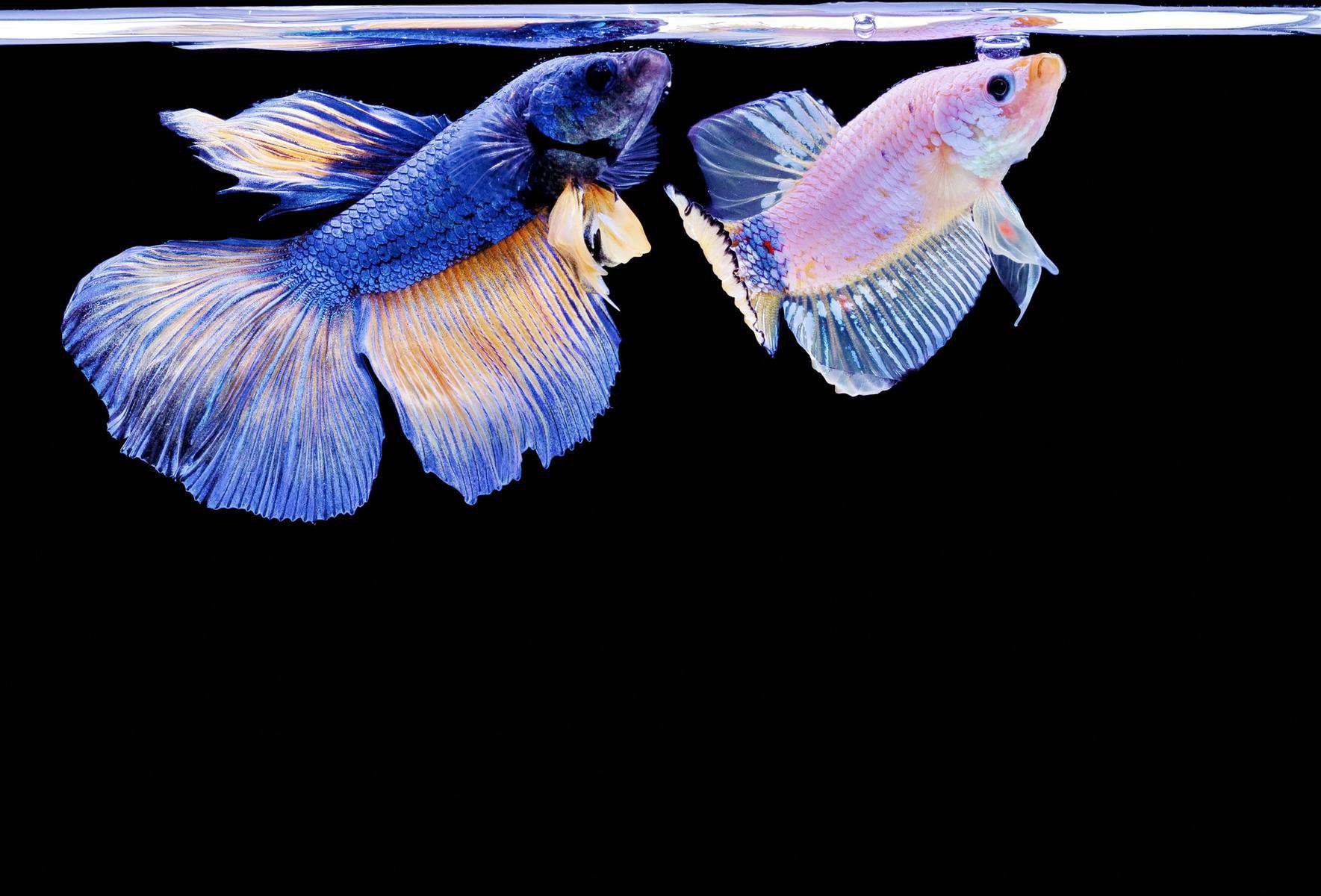 This is a highly debated topic within the betta fish community, but most hobbyists lean towards no, you cannot keep male and female betta fish together even if you have a large enough tank.

Not only will the fish eventually find each other and fight or aggressively mate, but that is also a lot of wasted space for a handful of fish that could otherwise be filled with hundreds of tetras or other community freshwater fish!

It should be noted that some hobbyists have had success keeping harem tanks of female betta fish with only one male fish, but these aquariums are expertly maintained and treated with dense vegetation, the highest quality food, and prepared for housing for the potential spawn.

Why is your male betta attacking your female?

This is what should be expected when placing a male and female together. Remember, these fish show aggression to their own reflections and that won’t get much better when putting an actual fish in front of them!

But what if your fish were getting along fine and then the male suddenly goes after the female? This could be part of the breeding process.

Betta fish have an especially aggressive nature when they breed. The act of it alone can lead to a dead female betta fish as the male wraps around her, nearly crushing her, and leaving her near lifeless at the bottom of the tank once the bubble nest has been filled with eggs.

Unfortunately, there’s no way to gauge how much aggression your male will show during these periods, and you should be prepared to lose a fish or two; if breeding this way, a sorority setting is recommended so that the male doesn’t overly harass the one singular female before it’s time to mate.

However, say that you’ve successfully bred the same male-female pair before and you want to try again. This does not automatically mean that the fish will accept each other again and it’s still a very real possibility that you will lose a fish.

What if you want to breed your male and female betta fish?

Breeding betta fish is very difficult and should only be attempted by expert hobbyists who have the space and money to not only have large tanks for the breeding and spawning process, but also the resources to care for and sell those spawn. 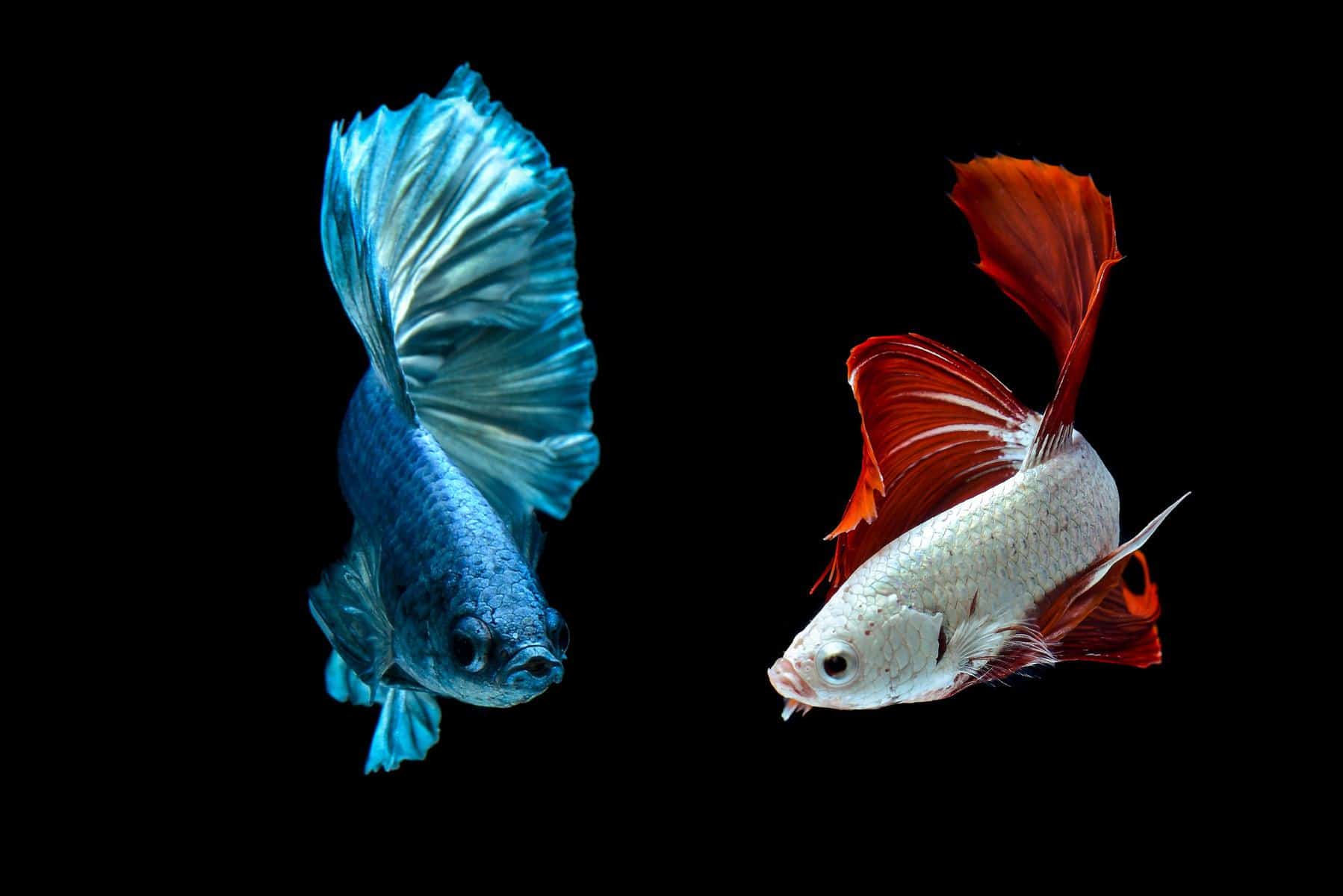 If attempting to breed your fish, then you should always use high-quality bettas that you know will pass on good, sustainable genes. It isn’t ethical to go through the poor selection of betta fish they have at pet stores as these fish have already likely been inbreed and housed in bad conditions. You also want to consider the resale price of the spawn.

As we’ve already mentioned, a male may be introduced into a harem setting under special circumstances; this should only be attempted in a very large tank, preferably in excess of 55 gallons (208.2 L) with lots of plant life.

Some hobbyists have had success keeping one male and one female in a 20-30 gallon (75.7-113.6 L) tank for only the duration of the breeding process. The male should be placed in the aquarium first and allowed to make a bubble nest; a leaf or other floating material should help encourage the male to build one.

The female may be introduced shortly after this. They should start displaying mating signs, but if you see any signs of over-aggression, then immediately separate them!

If successful, the male will place the eggs into the nest. This process can go on for several hours and the female should be removed as soon as it is over.

The male will continue to monitor the nest for the next day or so. The eggs will slowly begin to hatch but won’t become fully free-swimming until a couple of days after that, at which point, the male can then also be removed.

These clutches are usually small and only contain about 10-50 eggs. However, some fish have the ability to spawn several hundred eggs at a time.

Raising betta fish fry is expensive, time-consuming, and takes up a lot of space. Remember that each one of those baby fish will turn into a full-size betta fish with all of the betta personality.

Once the fry have fully hatched, it’s time to feed them. You will want to give them high-quality food that is easily digestible. Once they’ve grown to a decent size, you will then want to perform daily water changes. As they continue to grow, you may need to upgrade the tank to keep up with their demands.

After three months, they will need to be housed in their own 0.5-1.0 gallon (1.9-3.8 L) containers. At this point, you can begin to look into selling them or giving them to other hobbyists. Otherwise, you will need to accommodate for more permanent housing.

Other ways to keep your male and female bettas together

There aren’t many ways that you can successfully keep a male and female betta together in the same tank. The only real way to achieve this without ending up with dead fish is by using tank dividers, but even that comes with some controversy.

If deciding to split your tank up into separate sections for your male and female bettas, then you need to make sure that your fish tank is a large enough size to give each betta fish at least 5 gallons (18.9 L) of swimming space. This means that a 10 gallon (37.9 L) is the absolute minimum for keeping more than one betta fish.

In general, many hobbyists don’t like divided tanks because they create uneven flow and heating in the aquarium. Not only this, but the fish are also still able to see and smell each other, which can still create aggression between the fish, leading to unpredictable behavior and even injury.

Betta fish are able to find their mate mainly due to scent and pheromones that lead them to each other. Even if you make it so that the fish couldn’t see each other past the divider, there is still the chance that they will smell the other betta fish that is ready to mate, which can cause problems.

If this happens, the female can become egg-bound. This means that your female betta has produced eggs and is carrying them around in her abdomen, waiting for a male to fertilize them.

As a result, the abdomen can become painfully bloated and swollen; the eggs will either need to be released or absorbed back into the body.

Hobbyists are split about using tank dividers to remedy egg-bound female bettas. One side believes that seeing a male betta will influence her to drop her eggs, others think Epsom salt baths and time can do just the same.

In order to help prevent your fish from sensing each other, it might be best to have two completely separated sides of the fish tank, each with its own filtration and heater so that water temperature and flow can be regulated. This way, there is even less chance of disease being transmitted as well.

What if your male and female betta don’t get along?

If you’re fortunate enough to notice signs of aggression between your male and female betta before it turns into a bloodbath, then you should separate them immediately.

It’s best to give them both their own separate tank so they have personal space to recover and calm down. From there, it is probably still best to keep them away from other fish entirely or to cautiously introduce more betta-compatible tank mates when enough time has passed.

As a last resort, you may rehome the betta to someone with an appropriately-sized aquarium.

While there is no right or wrong answer for if you can keep male betta fish and female betta fish together, if you have any doubts, then it’s better to keep them separate.

If planning on attempting a female sorority, make sure that the tank size allows for dense vegetation for your fish to hide and escape to; it should also be noted that it’s believed betta siblings get along better in these familial settings.

If planning on setting up a split tank for your male and female betta, then also make sure each side of the aquarium is an appropriate size. It may be better to create totally separate systems within the aquarium to prevent over-aggression and the possibility of your female becoming egg-bound.

If you have any questions about female bettas, male bettas, keeping male and female bettas together, or have had success keeping this difficult male-female pair together, don’t hesitate to leave a comment below!