The rosetail betta, also known as the rose petal betta, is one of the newer varieties of the ever-popular betta fish widely available on the aquarium market. With their large flowing D-shaped caudal fin, these fish are really a spectacle to see in the home aquarium.

However, this beauty comes at a price, and many of these fish cannot swim freely. But with the right betta fish care, keeping a rosetail betta can become possible.

Keep reading to find out everything you need to know about rosetail bettas, why this is one of the harder betta varieties to keep, and if this breed is right for you! 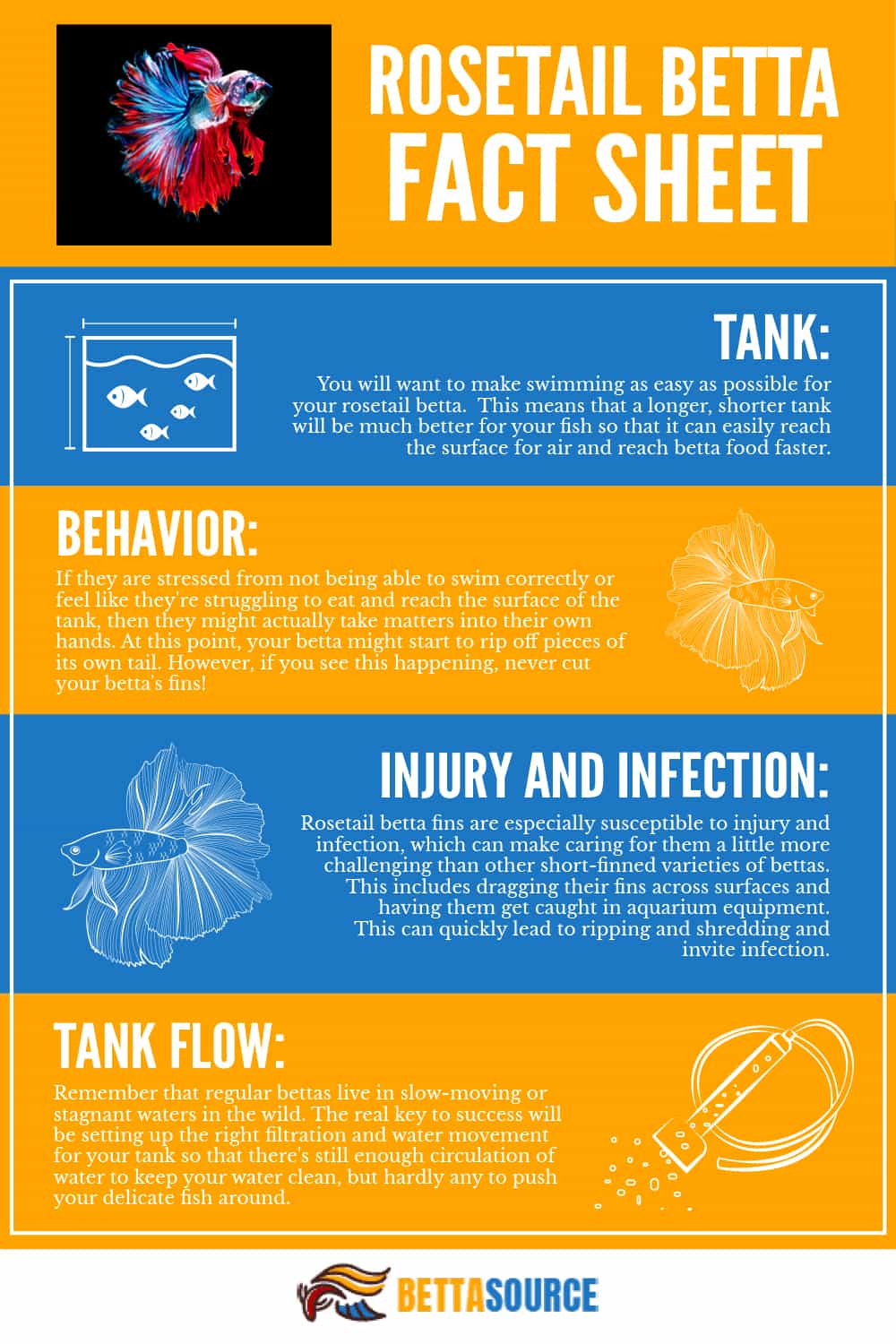 All domesticated bettas (Betta splendens) result from selective breeding, which involves getting the most vibrant colors and showstopping fins.

The rosetail betta is no different. 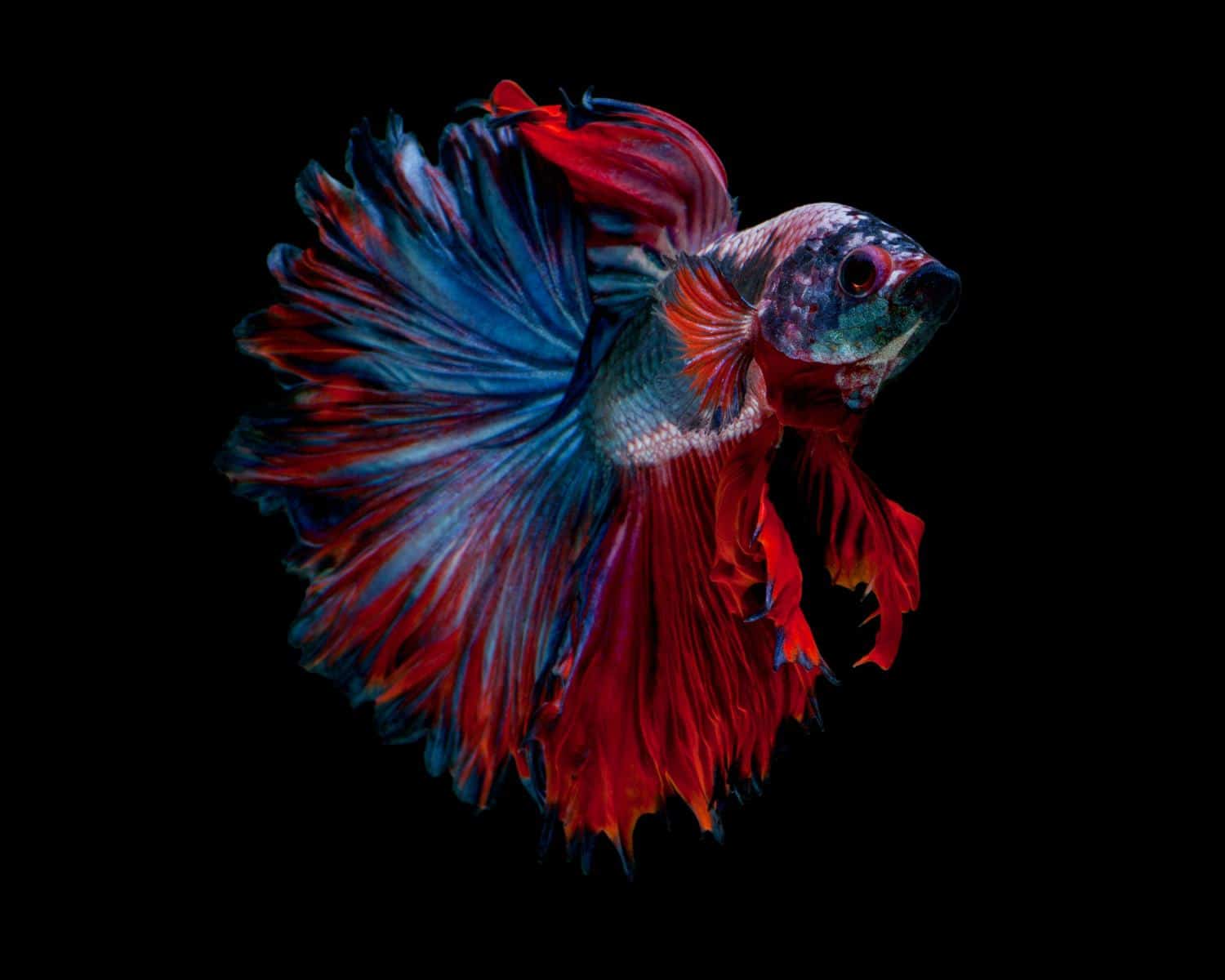 This fish is named after its elaborate flowing tail fin; they may also be known as rose petal bettas or feathertail bettas if the ruffle in the fins is especially accented.

This fish is a variation of the Halfmoon betta, which has a tail fin that spreads 180-degrees when expanded. However, rosetails have been bred even further to have extremely ruffled and branching tail fins past the spread of the Halfmoon breed.

As a result, these fish have a tail that can resemble rose petals flowing in the water. This tail is so large that it often overlaps the betta’s other fins!

Rosetails have been bred in most typical betta color combinations; the females are usually duller and smaller and will have significantly shorter tails. However, this tail is still usually longer than that of other short-finned betta breeds.

Because their tail is so excessive, there are some special requirements you will need to take into consideration when setting up your betta tank.

But how did these types of bettas come to be in the first place? And why are they still bred if there can be potential problems?

To understand where the rosetail betta fish came from, we need to look at how betta breeding started.

Today, most domesticated betta varieties have been selectively bred through long lineages deriving from the short-finned Plakat bettas. Over decades, these aquarium fish were bred for aggressiveness, color, size, and hardiness.

As a result, this caused genes to be expressed that had been dormant before. Over the next few decades, these genes were carefully chosen and bred out to become more prominent.

Today, betta tail types are bred in all shapes and sizes with varying degrees of beautiful finnage. However, the hardiness and aggressiveness have been maintained throughout all that breeding.

But where does the rosetail betta enter into this process?

In 1989, well-known betta breeding team Rajiv Masillamoni and Laurent Chenot developed the rosetail betta variant, though it was not named that until 1991 by Jeff Wilson (who also coined “Halfmoon”).

Rosetail bettas were the result of mutations in betta traits while attempting to get the perfect Halfmoon betta. While fascinating, these fish were undesirable due to their inability to spawn and generally weak swimming ability.

These mutations were nearly forgotten until Jeff Wilson and Pete Goettner brought them to the 1993/1994 IBC Convention; these fish were shown as “Blonde Diamond Halfmoons” due to their pale coloration and uniquely shaped tail fins.

Today, rosetail bettas are pretty common and are still being bred despite varying opinions at the breeder and hobbyist levels.

Betta fish breeders speculate that a Fullmoon tail type with a 360-degree spread could be possible if careful breeding of rosetails continues. 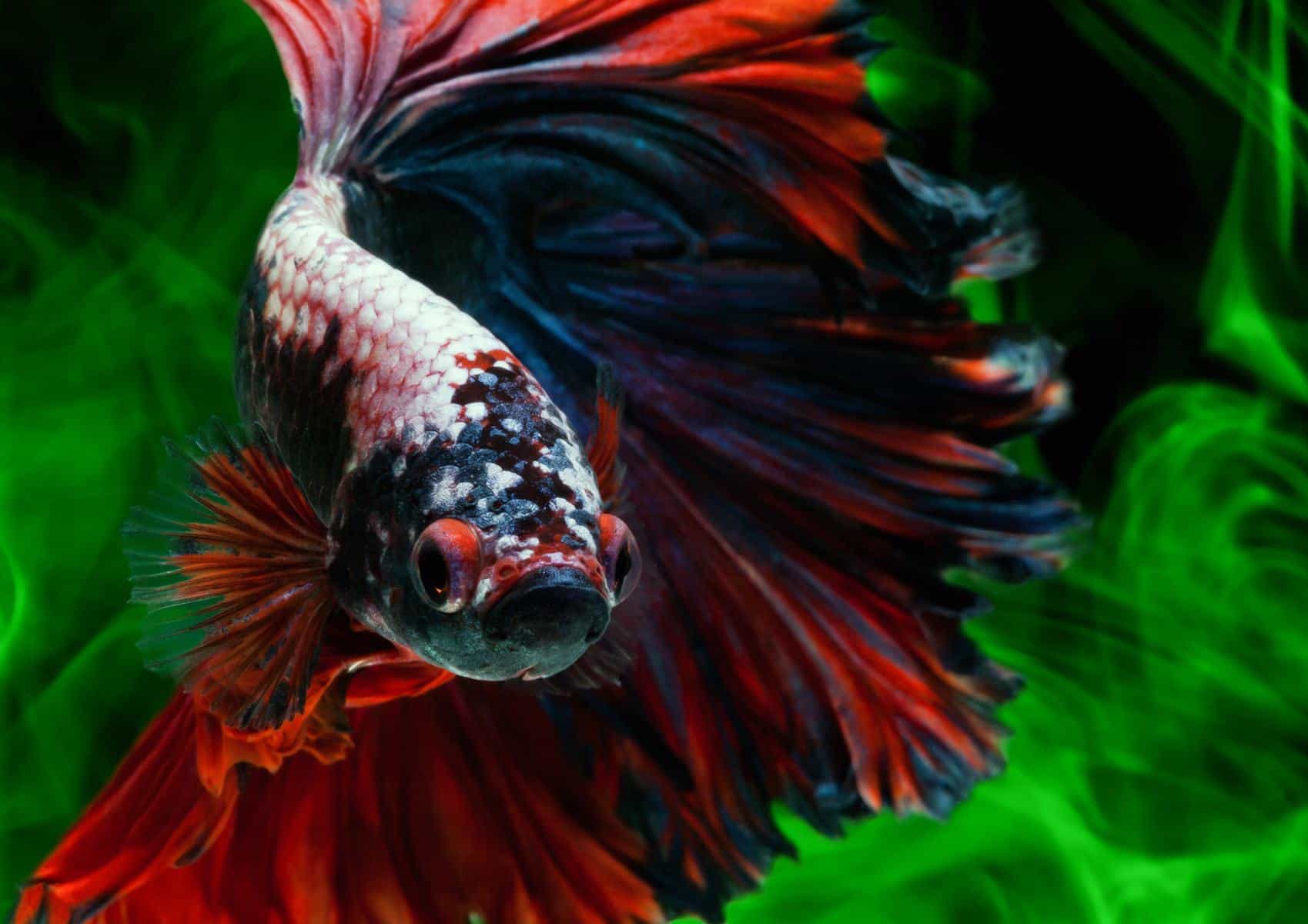 The hobby is split about rosetail betta fish. While they are simply beautiful fish, they aren’t easy to keep, and their health conditions can quickly change at any moment.

Mainly, betta keepers are worried about excess fatigue, injury, and infection, as well as the betta’s ability to breathe and eat.

It is not uncommon to find your betta fish resting on the substrate, a decoration, or even broad-leaved plants at various times throughout the day.

For the most part, this is just them resting and is completely natural betta behavior; there are even specific products, like betta hammocks or floating logs, that can give your fish a luxurious place to rest!

However, betta fish with spectacular finnage will usually find it more exhausting to move around the tank than other betta breeds. This can lead to an increase in resting, which can lead to injury if the fish is left to rest on sharp or jagged edges.

You want to be able to enjoy seeing your fish swim happily in its betta tank! You don’t want to always worry about your fish being at the bottom of the aquarium.

Also, swimming becomes that much harder for betta varieties with more extravagant finnage as they get older.

Rosetail betta fins are especially susceptible to injury and infection, which can make caring for them a little more challenging than other short-finned varieties of bettas.

As you might have guessed, rosetail bettas are very likely to get their fins caught on various objects within the aquarium. This includes dragging their fins across surfaces and having them get caught in aquarium equipment.

This can quickly lead to ripping and shredding and invite infection. Sadly, sometimes the weight of the tail is so extreme that the rays in the fin actually start to collapse and break, which will usually lead to a permanently crippled betta fish.

Not only is infection a risk to your individual fish, but if you have poor quality tank water, injury can lead to the whole tank becoming infested with parasites that can take weeks to cure.

Most often, dragging and ripping lead to either a bacterial or fungal fin rot infection. However, rosetail behavior can also lead to infection even if you make sure to safety-proof your aquarium.

Betta fish can become annoyed with their tails.

If they are stressed from not being able to swim correctly or feel like they’re struggling to eat and reach the surface of the tank, then they might actually take matters into their own hands.

At this point, your betta might start to rip off pieces of its own tail. Not only is this concerning to see and can devastate the beauty of your fish, but this also welcomes infection.

However, if you see this happening, never cut your betta’s fins!

If your fish has difficulty swimming, then it will have difficulty getting to its betta food.

This can lead to uneaten betta pellets left to rot in the aquarium and a hungry betta fish, which will also affect overall health.

As a Rosetail fish keeper, you should give focused feedings, delivering food in the most accessible ways for your fish.

Similarly, rosetail bettas can have difficulty breathing. All betta fish are labyrinth fish, meaning they have a specialized organ for breathing atmospheric air if water conditions deteriorate.

Even if you have pristine water, labyrinth fish still need to have access to the surface of the water to take in atmospheric air at the water surface now and then.

If your fish is having difficulty making its way up to the surface of the water, then this could cause stress and a shortened lifespan; in most cases, this will lead to tail-biting.

Now that we know the concerns around rosetail bettas, does that mean they shouldn’t be kept in the aquarium hobby at all?

Many hobbyists avoid buying betta fish with excess finnage to stop betta breeders from continuing to breed troublesome varieties. However, with the right care and setup, there are ways to keep a rosetail betta happy and healthy.

You will want to make swimming as easy as possible for your rosetail betta.

This means that a longer, shorter tank will be much better for your fish so that it can easily reach the surface for air and reach betta food faster.

One of the best ways to keep your rosetail betta the healthiest it can be is by giving it a tank filled with live plants that won’t scrape against your betta’s fins and that will also provide a resting place at all levels of the display. You can also use silk plants in a pinch.

Not only this, but live plants will also increase oxygen levels in the aquarium, which is never bad. Ribbon plants are good if you can keep part of them out of the water.

If unable to set up a heavily planted tank, betta hammocks and floating betta logs may also be used.

Remember that regular bettas live in slow-moving or stagnant waters in the wild. The real key to success will be setting up the right filtration and water movement for your tank so that there’s still enough circulation of water to keep your water clean, but hardly any to push your delicate fish around.

The best way to avoid this is by using either a sponge filter or a prefilter covering the intake grates, preventing your betta’s fins from getting sucked up.

While you want good oxygenation throughout the tank, you may need to compensate gentle filtration for more frequent water changes to maintain water parameters and keep out fin rot.

The main concern with keeping a rosetail betta happy and healthy is getting the tank set up correctly in the first place. However, you will also want to consider tank mates, substrate, and going to a reputable breeder.

While you might be able to keep a docile betta buddy with other domesticated betta breeds, you don’t want to add any extra stress that doesn’t need to be there for your rosetail.

Because of this, tank mates are a bad idea unless you plan on adding some shrimp or snails.

You will also want to consider substrate. Sand is the most preferable, though finer gravels should also keep your fish from rubbing its fins too much.

Lastly, you will want to go to a reputable breeder when picking out your fish. This will ensure that your fish have strong immune systems when you buy them, preventing immediate illnesses from developing in your own aquarium.

This also helps ensure that genetics are best bred for long-term success as much as possible.

The list of bettas available to the public is long and varied. The rosetail betta fish with its impressive finnage is a rather new but popular betta widely available in the fishkeeping hobby.

Its floral tail comes in various colors that make it a favorite among betta fans looking for extreme finnage and a truly unmistakable showpiece. Bettas with well-balanced finnage are highly sought after.

However, these genetics can cause the fish to become weighed down by excessive finnage, leading to a decline in quality of life if not given the right betta care.

If you have any questions about rosetail betta fish, other breeds of betta fish with extreme tails, or have had experience caring for one of these beautiful fish, don’t hesitate to leave a comment below!