Constipation is a very common problem for many pet fish species, including bettas. Constipation is not pleasant for your betta fish, and if it happens too often, your pet could develop a number of serious health issues.

Luckily, constipation is a pretty easy condition to treat, although it can be confused with more dangerous betta illnesses, such as dropsy. The treatment for constipation and dropsy is totally different, and getting it wrong could make matters worse and could even kill your beloved betta buddy.

In this guide, we tell you everything you need to know about how to recognize, treat, and prevent constipation in betta fish.

What is constipation in betta fish?

Constipation in fish is much the same condition as it is in humans and other creatures.

Basically, constipation happens when the fish has difficulty passing feces (pooping.) Constipation generally happens when the feces becomes too hard to pass through the fish’s digestive tract in the usual way. Once that happens, solid waste stops moving through the digestive tract, effectively blocking it. Each time the fish eats, more and more food gets stuck in the queue, and the fish becomes constipated.

Is constipation fatal in betta fish?

Although constipation may not sound like much of a big deal, the side effects it causes can be dangerous to your fish if you don’t take steps to remedy the problem.

If your betta is constipated for any length of time, he will become prone to swim bladder disease, which will cause your pet considerable stress. Prolonged periods of stress can be dangerous for your betta, as his immune system will become weakened, leaving him vulnerable to serious infections and diseases.

So, although constipation alone won’t kill your betta, some of the side effects it causes could do.

Symptoms of constipation in bettas

There are quite a few signs that your betta fish might be suffering from constipation. However, we advise that you take note of all your fish’s symptoms as he could have other illnesses that are much more serious than constipation. As with most fish diseases, the sooner you identify and catch the condition, the more successful the treatment will most likely be.

Here are the most common symptoms of constipation in bettas:

Healthy feces should appear dark brown in color and will sink to the substrate right away. However, in constipated betta fish, the poop will be pale in color and stringy, often remaining attached to the fish and trailing behind him as he swims around.

Betta fish can be picky eaters at the best of times, but they are notoriously greedy once they’ve found a foodstuff they particularly enjoy.

If your betta stops eating or spits out his food, he could be suffering from constipation. That said, loss of appetite is symptomatic of many illnesses and diseases, so don’t assume that your fish is constipated solely on the basis of this symptom. 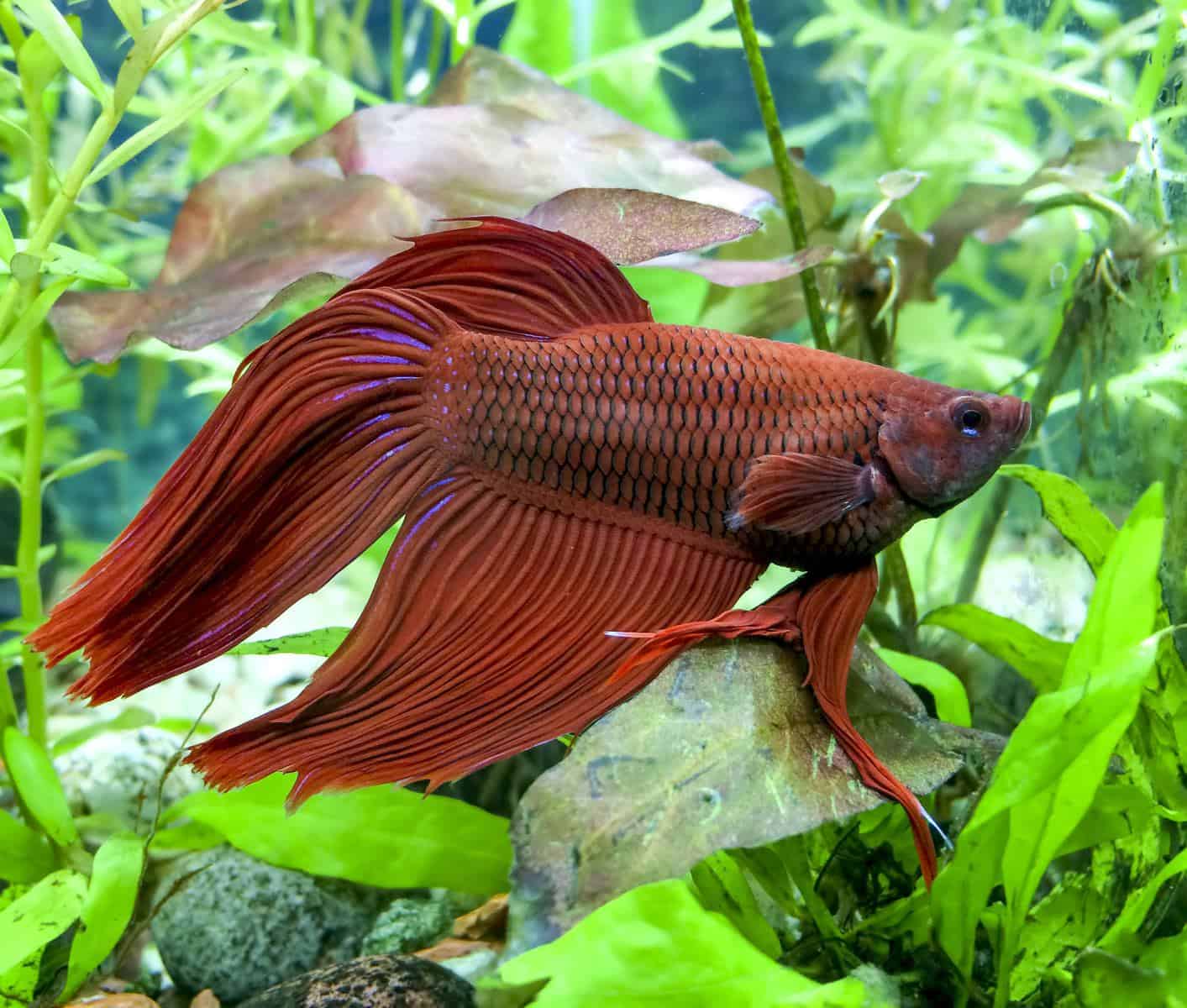 Imagine you just ate a huge meal. You wouldn’t want to move around too much, right? Well, it’s the same for your betta buddy. If your betta is lethargic and spending most of his time laying around on his betta hammock and ignoring his toys, he might be constipated.

However, lethargy and inactivity are very common symptoms of many fish diseases, so don’t assume that your fish is constipated simply because he’s not swimming around as much as usual.

A bloated, swollen belly is a very common indicator that your betta is constipated. When your fish’s digestive tract is blocked with feces, the food waste gradually backs up, eventually bloating the creature’s belly.

However, dropsy can also cause your fish’s belly to become swollen. In a betta with dropsy, the fish’s scales stick up, giving the animal the appearance of a pine cone. Dropsy is a very serious condition that is usually fatal once it has progressed to the pineconing stage.

In very severe cases of constipation, your betta might have trouble swimming properly. In these cases, the condition has caused the fish to develop swim bladder disease, which must also be treated if your fish is to make a full recovery.

Swim bladder disease is also known as Flip-over or Swim Bladder Disorder and commonly affects betta fish, although most fish species can suffer from the condition.

A betta that has Swim Bladder disease might float upside down, swim on his side, sink to the bottom of the aquarium, or be unable to swim down from the water surface. Bettas are labyrinth breathers and need to ascend to the surface periodically to take gulps of air. If your betta is stuck on the substrate, unable to swim up to the surface, he will become highly stressed.

What is a swim bladder?

Most species of bony fish, including bettas, have an air bladder or swim bladder.

The swim bladder also works as a resonating chamber, producing or receiving sound. Who knew?!

What causes constipation in bettas?

Once you’re sure that your betta has constipation, you need to figure out what’s causing the problem so that you can take action to prevent the condition from developing over and over again.

There are several causes of constipation in betta fish:

By far, the most common cause of constipation in bettas is poor diet or incorrect feeding. (Check out this article to learn how you should feed your betta to keep him in good health.)

If you feed your betta only tropical flakes, he won’t get the necessary meaty protein that he needs in his diet. Also, dried foods, including pellets and freeze-dried foods, contain very little moisture. So, as soon as these dry products come into contact with water or the mucous inside your betta’s mouth and gut, they swell, potentially blocking your betta’s digestive tract and causing constipation.

If you do decide to feed your betta dried foods, always soak them in a little tank water before feeding.

Betta fish are omnivores in that they do eat a small amount of plant matter. However, in the wild, the betta fish is primarily carnivorous, eating insect larvae and water-bound insects.

If you feed your betta a diet that consists mainly of standard tropical flake or betta pellets, he may not get enough meaty protein or fiber. The best way to remedy that dietary deficiency is to feed you betta some live foods, such as mosquito larvae, daphnia, bloodworms, and the like. These foods are great sources of dietary fiber and protein, and they also replicate what your betta fish would eat in the wild environment.

If you can’t get hold of good quality live food from a reliable source, you can use frozen foods instead, and thaw a small quantity of the frozen food in tank water before feeding.

Feeding your betta too much can be another common cause of constipation. Bettas are notoriously greedy fish, and they will often keep on guzzling food even when they don’t need it.

A betta’s stomach is roughly the same size as his eye, so you can see that it doesn’t take much food to fill up your pet completely. The best tactic is to feed your fish a couple of times every day, offering only enough food to keep him busy for a couple of minutes.

It’s also a good idea to starve your betta for one day each week. Fasting, in that way, is not cruel; it’s actually very good for your fish. Withholding food from your betta allows your pet’s system to process the food he’s eaten and works well in preventing him from becoming constipated.

Bettas can be quite lazy fish. Often, a betta will patrol his territory once or twice a day and spend the remainder of his time lounging on a flat leaf or napping in a hollow floating log or cave. So, if your betta has a small tank, he most likely won’t get much exercise. Ideally, your betta’s tank should be at least a 5-gallon capacity unit, preferably larger.

You can provide your pet with stimulation and encourage him to move around more by putting a selection of toys in his tank. Bettas love interactive toys too, so try putting a ping-pong ball in the tank and entertain your fish by pushing the ball around on the surface. You can bet that your fishy friend will join in the game!

How to treat constipation in betta fish

Once you’re confident that your betta buddy is constipated, you’ll need to know how to treat him. There are several methods of treating constipation in betta fish, all of which are simple and very effective.

Peas have long been used to cure constipation in pet fish, and this humble vegetable is remarkably effective at doing so.

However, you do need to prepare the pea before you give it to your betta. Preparing the pea is quick and easy, and the result is well worth the little effort that it takes.

If your betta has a severe case of constipation or the pea treatment isn’t effective, you need to up the ante and try using Epsom salt to treat your pet.

Epsom salt is commonly used to treat constipation in fish and in people too! Epsom salt works as a gentle muscle relaxant and will help if constipation is the cause of your betta’s problems.

If your betta lives alone, you can treat his tank with Epsom salt. However, if he has a few tankmates, you’ll need to put him into a quarantine tank for the duration of his treatment.

How to prevent constipation In betta fish

Rather than having your betta fish suffer from the discomfort of constipation, it’s best to prevent the problem from occurring in the first place. Here are some proven ways of preventing constipation in bettas. 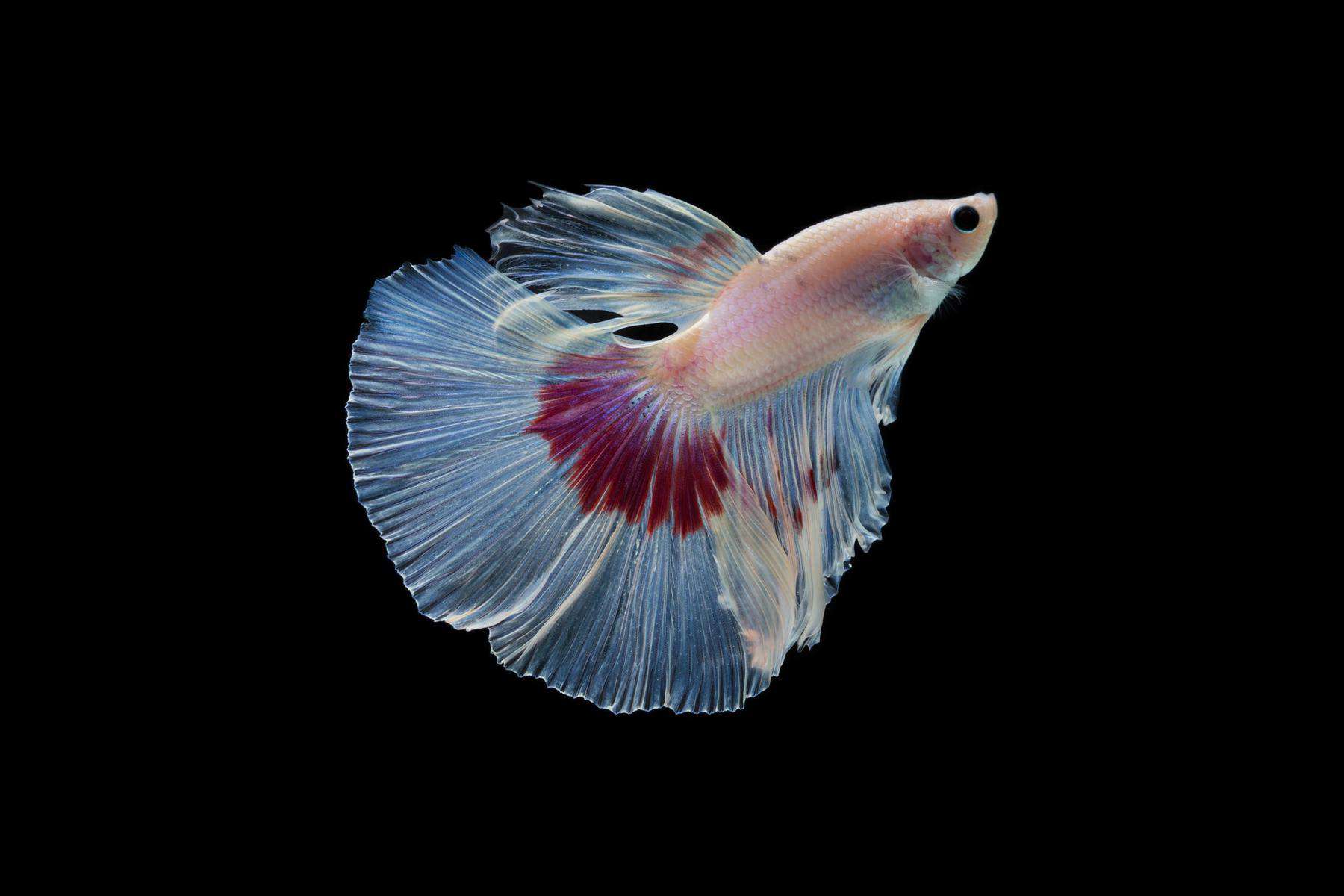 It’s extremely important to have one day per week when you don’t feed your betta at all. Remember, bettas do nibble on algae, so your pet won’t starve! And 24 hours without food allows his digestive tract to empty, helping to prevent constipation.

As previously mentioned, your betta fish’s stomach is the same size as his eyeball. So, you can see just how easy it is to overfeed your pet.

We recommend that you feed your betta twice a day, offering him just enough food to keep him busy for two minutes.

Give your pet a balanced diet that’s full of variety. The base diet could consist of high-quality betta pellets supplemented with some live bloodworms, a blanched pea, or some frozen daphnia every couple of days as a treat.

Live food is great, as it encourages natural behavior and gives your betta plenty of exercise while he chases down his dinner!

Constipation is very common in betta fish. Although the condition isn’t fatal, the side effects can lead to more serious diseases that could kill your pet.

Prevent constipation in your betta fish by feeding him a correct, balanced, and varied diet that includes vegetable matter and live or frozen meaty foods. Include one day each week when you don’t feed your fish anything at all. That ensures that your betta’s digestive tract won’t become blocked with hard, compacted feces, thus avoiding constipation.