If you’ve been getting into some serious betta fish research lately, chances are you’ve come across at least a few mentions of Indian Almond leaves. But, chances are you still have a few questions about them. Are they good for betta fish? What benefits are real, and which ones are myths? Read on to find out everything you need to know before you stick one of these in the tank.

Disclaimer: We’re all for choosing natural and homeopathic remedies that have been proven to work instead of relying on harsh and sometimes harmful chemicals of modern-day manufactured betta medicine. However, please keep in mind that the benefits of these leaves are merely speculated. If you have a seriously ill fish, please seek proven medical care methods rather than testing out this one. This should be tried as preventative maintenance only to prevent illness rather than cure it.

What’s the Hype? Some General Info

It all started because fish in waters where these leaves naturally fall seems to be more resistant to disease, have stronger fins and scales and are healthier in general. So breeders use the leaves in their systems to bring the same benefits to their Bettas. Since then, the practice has spread to even some casual betta keepers.

Although many people choose to use these almond leaves for homeopathic purposes, there’s been very little in the way of scientific evidence that supports the positive outcomes and claims generated by the users of these awesome smelling leaves. Yes, I said awesome smelling. You pick yourself up a package and you can find out for yourself these smell great.

In any case, there is no real evidence to support the natural and magical healing powers of these leaves. However, they are so popular that I can say it’s quite evident that these leaves pose little to no risk to your little fish. 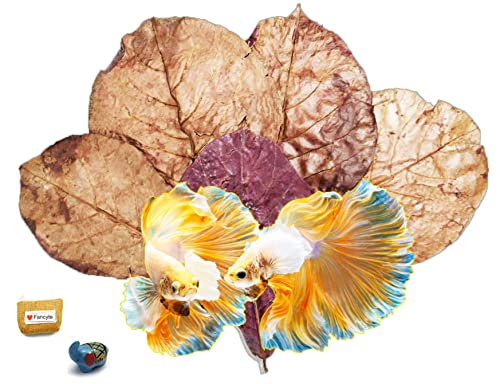 How it Works (We Think)

Interestingly enough, nobody completely understands what the chemical process is going on between the interaction of the Indian almond leaves and the eggs that supposedly keep betta fish eggs from spoiling due to bacterial and/or fungal infection. One of the leading theories, however, is that the trees that produce these Indian almond leaves do produce a certain chemical that protects itself by warding off predatory insects.

There’s a correlation between the chemical produced by the tree that wards off insects and the fact that these leaves limit the amount of betta egg spoilage due to bacterial/fungal infection. In a certain regard, it sort of makes sense. Predatory insects are living creatures and predatory bacteria/fungus are also living creatures. However, it’s still just speculation.

Natures Fight Against Bacteria And Fungus

Let’s start with a common ailment that people use these leaves to treat. Many people believe that Indian almond leaves possess homeopathic antifungal/antibacterial properties. I mean, I would certainly sing the praises of a homeopathic remedy towards a bacterial or fungal infection with my betta fish! If it truly worked, that is.

Breeders of betta fish in particular love these magical Indian almond leaves because they believe that the addition of these leaves to the water the female betta fish will be laying eggs in will drastically help to limit funguses that cause betta eggs to spoil. Generally, these types of infections happen more often than not when the eggs are in the process of falling to the bottom of the tank and while the eggs rest briefly on the bottom.

Bacterial infections taking hold in newly laid eggs can ultimately devastate if not destroy the brood. When you are a betta fish breeder and your livelihood depends on it, you will try anything if not everything to take “chance” out of the equation.

One of the more popular claims about the effects of adding Indian almond leaves to your home aquarium is that they can alter (actually lower) the pH levels in the water. Betta fish found in nature typically live in naturally acidic water, more so than an aquarium at home.

The vast majority of good pet owners want to do the most that they can to mimic the environments that their tropical pets hail from. Therefore it would make sense that the purported ability to lower the pH level in a fish tank would be a major selling point in the marketing of these almond leaves.

Saving the best for last, the most common use for these leaves of Indian almonds is the hope that they will promote and encourage spawning. Little blue pills in brown leaf tea form. In fact, they are so popular among betta breeders that some will even postpone their activities for the sake of making sure they have some in the tanks.

Now, if you ever bore witness to such fervent faith in almond leaves carried by some of these betta breeders before… You yourself would be a bit curious to see if there is any truth in this interesting claim. Most of you out there reading this probably do not have both a male and female betta fish to “test” this theory on, so let me tell you a story.

From my personal experience, I’ve breed fish both with and without the Almond leaves and have had essentially the same results. I’m not personally convinced by the “magic,” but that doesn’t stop others from being die-hards about it. So take this one with a grain of salt. Still, there is no actual, scientific experimentation that has been done to prove this stuff works.

Indian almond leaves can tint your water a bit. Like with a teabag, these leaves, when steeping in your water do release some of their brown color into it. Personally, this feature is what led me to buy some in the first place. I was trying to replicate the natural water conditions of a bettas home environment. Betta fish dig that murky water look.

However, I have discovered that results may vary. Still, they’re undeniable, unlike some of the more sparsely evidenced claims above. So if you’re interested in achieving a more natural tank look, these might be a good option for you.

There are other claims ranging from longevity to appetite and even healing an otherwise incurable swim bladder condition. And I’m sure there are many more claims too. However, the claims that you see above are, more or less, the “big” ones that you might run into during your research.

Now, I’m not saying that Indian almond leaves or their proponents are “stupid” by any means. As I said, there just hasn’t been enough formal research to prove one way or another on these claims. So if it’s working for you and your fish, then just keep on swimming. These are definitely a popular, safe method to use. And regardless of whether they actually improve your fish’s health or environment, they certainly won’t do any harm. So there’s really isn’t much reason not to try them out.

Plus, they smell really good! Seriously, make sure that you stick your nose in the bag when you first open the package up. You’ll want to wallpaper your room with them.

Whether you choose to use these leaves in your betta fish tank or not is ultimately up to you. It’s always interesting to try new things, especially when the new things don’t pose any threat to your betta fish.