While their care is similar to a domesticated betta, there are many things that are different between the two.

On average, Betta Mahacaiensis lives a decently long life, around 5 to 7 years. In a tank environment, the correct water parameters, tank size, tankmates, stress level, and more are important factors that affect the livelihood of your fish.

Betta mahachaiensis are a beautiful species of wild betta. They are usually greenish blue in color with a brown to black base body color.

The scales on its cheeks are split into two parts by a dark vertical line. They also have a black point on their dorsal fin.

Betta mahachaiensis is the largest betta from the splendens family. Males can reach a length of 5.2 inches, while females grow to a length of 4.8 inches.

Both males and females have green to blue scales. The female has a brown body beneath the bright-colored body scaling. The base body coloration of the male has a deeper color than the female, almost black.

Both male and female fins are striped, black with blue or green. Betta males have more brilliant, bright colors.

Another way to distinguish between males and females is the difference in fins. The males usually have more fins which are also longer.

When looking at appearance, Betta smaragdina resembles betta mahachaiensis closely, but there are a few key differences.

Betta mahachaisensis have scaled cheeks, while smaragdina have more snakeskin-like scaling on the cheeks. Mahachaiensis has plated scales with a darkened stripe on their cheek.

Betta Mahachaiensis is a Betta species that originates from central Thailand. It is among the betta splendens group and five other betta species, including Betta splendens.

The name mahachaiensis comes from a sub-district of Thailand called Maha Chai.

The palms provide a place in which they can hide and reproduce. The males even build their nests on the palm branches. The plant’s fallen leaves also add essential tannins to the water.

Betta mahachaiensis Are Endangered in the Wild.

Impacted by a growing population and human activity, the habitat of the wild betta mahachaiensis is threatened. Farmers often push this species to relocate away from farming fields.

These fish are caught and sold in the market or aquarium trade. Betta mahachaiensis is one of the most endangered bettas due to these human interactions.

Betta mahachaiensis is a wild tropical fish. They were newly discovered in 2012, so we still do not know enough about them.

However, caring for a betta mahachaiensis is similar to other splendens. Caring for them is simple.

Betta mahachaiensis prefer tanks that are shaded without bright light. To re-create their natural habitat, many plants should be added to the aquarium.

Some plants include are java ferns, java moss, or anubias. Wood hardscapes or stones also provide good hiding places for these fish. Add tannins to the water to re-create the feel of the water in the wild.

For one male, a tank depth of 12 gallons is best. A long tank will be beneficial because it is recommended to keep the water level low. For a pair of fish, a 20-gallon long tank is required.

Tanks with lids are preferred to keep the humidity in the air, regulate water temperature, and prevent them from jumping out of the tank.

Although wild bettas are usually more peaceful than domestic bettas, take caution placing pairs together in the same aquarium.

If your tank is too small without hiding places, the male and female fight, and eventually, the female may die. The most important thing to remember is never to have more than one male in your aquarium.

To re-create their wild habitat, you can decorate your tank with leaf litter from oak or almond leaves. The leaves can provide shelter and produce microbes as they decompose.

The best substrates would be fine gravel or silica sand. Hiding spots are very important for betta mahachaiensis. You can use plastic pipes and plates to provide ample hiding spots.

It is important to avoid strong filters because betta mahachaiensis live in stagnant water in the wild.

The aquarium water should be between 72 and 79 degrees Fahrenheit with a PH of 7-8.5 and water hardness of 90-357ppm. Betta mahachaiensis prefer dim light and lots of hiding spots.

Betta mahachaiensis is usually pleasant when placed with other fish. However, they are not ideal for community tanks and are best kept with their own species. They can pair well with other smaller peaceful fish.

Male betta fish can be aggressive and have fights between them, so if you plan on having multiple males, it is important to provide a large enough tank for them to stay apart. No more than a few can be added to the fish tank.

Additionally, loaches, cyprinids, and kuhlii are compatible if they have similar water conditions and provide a large enough tank.

Betta mahachaiensis are very territorial fish but not necessarily always aggressive. They do not seek out fights but are capable of killing fish that invade their territory.

This behavior is why it is recommended that if they are kept in a community tank, they be kept alone or with other peaceful species. Bigger fishes are likely to intimidate it.

In the wild, the Betta Mahachaiensis diet consists of insects and other small invertebrates. They are both carnivorous and insectivores. It’s best to offer then meat-based foods as well as insects.

A varied diet is important to ensure your fish is getting enough nutrients. Small insects like crickets, fruit flies, frozen foods like bloodworms, mosquito larvae, and daphnia are nutritious foods.

They can also be fed fish flakes, but they often do not recognize it as food and usually will not eat it.

How To Breed Betta mahachaiensis 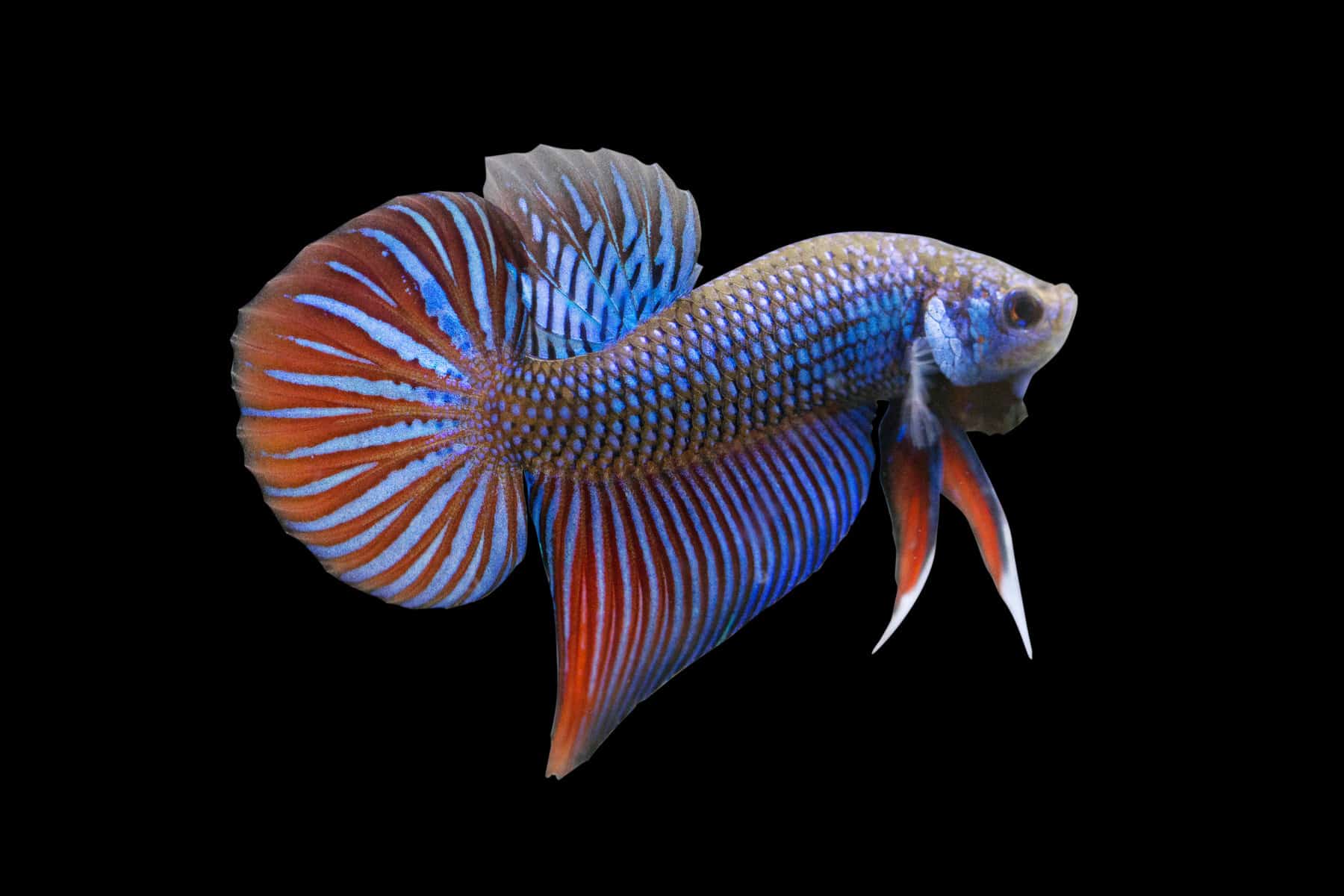 Breeding betta mahachaiensis is fairly simple, but they must be conditioned beforehand. Here are the steps on how to condition your betta to mate.

You will know they are ready to breed when the male starts to build the bubble nest, the female develops eggs, and the male displays his interest by flaring his fins and showing off his colors.

Once the male has completed the nest of bubbles, the female can be added to the tank the male is in. If everything goes correctly, they will mate, and the eggs will be gathered into the bubble nest.

This conditioning typically takes one to two weeks. Depending on the water temperature, the eggs will hatch in 2 days.

How Much Does a Betta mahachaiensis Cost?

Betta mahachaiensis are very popular aquarium fish. They are quite affordable. They can be found for sale on average between $40 each or $65 for a pair. Cost also varies based on location.

Like any other animal or human, betta splendens are susceptible to disease if conditions aren’t ideal. Here are some common diseases that affect betta splendens.

The swim bladder of a betta splendens is very sensitive. The swim bladder is what helps the betta stay afloat. Swim bladder disease often occurs from a bacterial infection, parasites, or constipation.

The treatment for swim bladder disease usually involves treating the underlying infection that caused it.

Ich is the most common disease that can occur in a tank setting. Symptoms include white dots on the body and fins, quick breathing, and appetite loss.

To treat ich, it is best to separate sick fish or do a treatment of the entire tank, even if your other fish seem fine. A higher temperature for 3 to 4 weeks can cure ich and add malachite green.

Ammonia poising can kill fish quickly. Ammonia poisoning often happens from an imbalance in your tank, such as a high number of fish to plants, overfeeding, a failing filter, insufficient water changes, etc.

Symptoms include appetite loss, lethargy, quick breathing, and dirty water. The treatment for ammonia poisoning is to change the water and add carbon into the filter for 5 days.

Dropsy is a very deadly fish disease that affects the kidneys. Symptoms include a swollen belly, outward white scales, and sunken eyes.

This bacterial infection can be prevented by keeping your tank clean and feeding your fish vitamin-rich foods. There is no treatment for dropsy.

Betta fish that have velvet have rusty-looking skin and scaly heads. They can also have black spots on their skin that cause color loss.

This parasitic disease can be prevented by improving water quality and ensuring a stress-free environment.

Velvet is highly contagious but can be treated with antibiotics. If velvet is not treated quickly, the sick fish dies within days.

It is important to keep an eye out for a few different factors to prevent disease. Check often that your biological filter is working properly. Don’t overfeed. Ensure the number of fish in your tank is appropriate for the water amount.

Betta Mahachaiensis are cheerful fish that get along well with most smaller fish and are very easy to care for. They provide an array of bright colors for your tank.

It is important, however, to know the proper feeding, tank requirements, and care necessary to keep your Betta Mahachaiensis healthy.

Keeping them with the same species or other peaceful fish will give you the harmonious tank environment you desire.