The betta fish, also known as the “Siamese fighting fish,” is popular among fish lovers. These tropical fish are loved for their beautiful colors and vibrant personalities.

Despite being one of the most popular aquarium fish, many betta fish owners have little idea of their origins.

If you’re wondering about the wild betta fish’s natural habitat and how to replicate it at home, this brief overview will help you understand more about them.

What Is a Wild Betta Fish?

According to Fish Laboratory Aquatics, the term “Wild Betta” refers to species of betta fish that can still be found in the wild.

Many of these species are not colored brightly like domestic betta fish. Due to selective breeding, domestic bettas have bright colors with many variations and specific markings.

Wild betta fish look very different from the domestic pet bettas you can find in a store. Wild bettas are a dull brown to grey color with short fins and a darker dorsal stripe.

This coloration is essential in the wild to help them hide from predators and blend in with surrounding plants.

Where Do Betta Fish Come From?

Betta fish originate from Thailand, where the wild males were caught for breeding and fighting, which is where the name “fighting fish” also came from.

According to aquariadise.com, the sport became so popular that the king of Siam, Rama III, taxed the fights. The king even owned a pair of prized fish which he later gave to Dr. Theodore Cantor in 1840. Cantor gave these fish the genus Betta.

Where Do Betta Fish Live in The Wild?

Wild betta fish originate from parts of Vietnam, Malaysia, Thailand, and Cambodia. The thenest.com states that they are found in rice paddies, river basins, and small streams where the water temperature only drops to 50 degrees Fahrenheit in the winter and is typically very warm throughout the rest of the year.

A wild betta’s natural territory is about a square meter. They live in typically shallow freshwater areas with lots of plants and slow-moving hot water. Depending on the species of wild betta, they can have preferred bodies of water such as a pond, stream, rice paddy, or canal.

Wild betta males prefer a habitat with many plants and debris to provide enough cover to live in proximity of other bettas without incident.

The season changes can significantly affect the habitat of the betta fish. During the dry season, water evaporates from ponds and streams in which the wild bettas live, often trapping them in small puddles.

Another trick bettas have to get out of this situation is their jumping ability. Bettas are skilled jumpers and can jump from one small pool of water to the next until they reach a larger body of water more suitable for living.

How To Replicate a Wild Betta’s Natural Habitat

When owning a wild betta species, it’s essential to provide them with a setup similar to the habitat they come from in the wild. The more similar the setup is to their wild habitat, the more they will thrive.

Bettas need ample space to express their natural behaviors, such as hiding and hunting; betta bowls are simply not enough. Bettas typically need at least a 5-gallon tank. A larger tank also helps to keep the water environment stable.

They prefer soft tannic water conditions similar to their natural habitat, which can be created by adding wood and other botanicals to the setup. A betta’s typical water habitat is slow with very little flow, so they don’t do well with a powerful filter. Live plants can also help to re-create their natural habitat and help slow down filtration even more.

In the wild, adult betta fish tend to live alone. Although they are still naturally aggressive, they typically have more space to spread out from each other in their natural environment. Betta fights are short-lived and usually purely over territory. 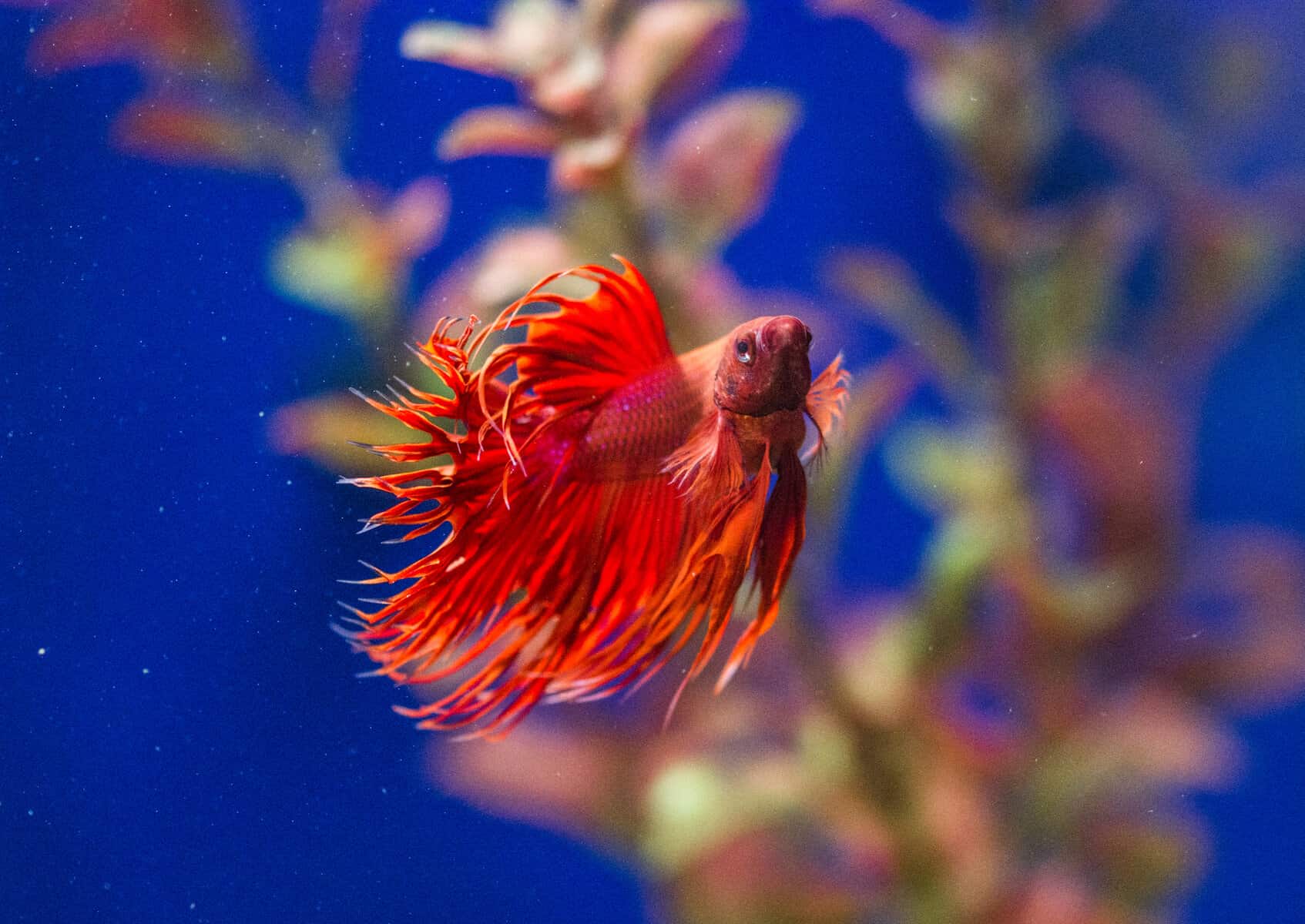 It is important to point out that not all betta species are aggressive. As stressed by japanesefightingfish.org, one species of betta that naturally thrives in the wild, Betta imbellis, is known as the peaceful betta. These fish are usually calmer and friendlier than other bettas.

Wild betta fish reproduction is similar to domesticated breeds. Some betta fish in the wild are bubble nesters, and some are mouthbrooders. Bubble nesting betta males make bubble nests using their labyrinth organ within their territory so the nest can be guarded.

The betta fish male attracts a female betta with a choreographed dance. Once the female chooses the male, they dance together by spreading their fins and flashing their colors. After their dance, the female betta begins to lay eggs which the male catches in his mouth and moves to the bubble nest.

The male watches over the eggs until they hatch. Once the eggs hatch, they remain in the care of the male betta until they are large enough to swim freely.

The courting and mating process of mouthbrooders is the same, except that the male bettas use their mouths as incubators for the eggs versus a bubble nest. Mouthbrooder bettas tend to produce fewer but bigger eggs.

The Diet of a Wild Betta

The wild betta is an omnivore that eats different types of food, including insects, insect larvae, and plant matter.

In Asia, where it originates, there are a large number of flying bugs and insects that use the water to lay and hatch eggs. So, bettas feed from the water surface to access the eggs. Bettas feed on mosquito larvae, zooplankton, crabs, lobsters, shrimp, and flies.

If you’re new to owning a wild betta, there are some critical mistakes to avoid when feeding them. Here are some feeding tips for your betta fish tank from Aquarium Sphere

Now you know everything you need to know about wild betta fish, where they come from, and their behaviors.

Learning about a betta’s wild habitat can help you to better care for your betta and re-create this habitat in your betta tank. A happy betta fish is a healthy betta fish.