Ammonia poisoning can be fatal to all fish, including your betta buddy if you don’t spot the warning signs that there’s a problem and take steps to deal with it. New tanks are often the worst culprits when it comes to ammonia poisoning, which is why so many betta fish fall victim to the deadly problem within a week of arriving in their new home.

In this guide, we tell you everything that you need to know about ammonia poisoning in betta fish, including the signs to watch out for, how to treat the problem, and how to prevent your fish tank water from becoming a toxic environment for your pet.

What is ammonia poisoning in betta fish?

In the open wild environment, it’s pretty rare to find significant accumulations of fish waste, leftover food, and general detritus. However, in a home tank, the environment is “closed.” That means that excess amounts of those substances can build up, causing excess ammonia to gather in the water, poisoning the fish.

Ammonia in the water burns the fishes’ gills, causing breathing difficulties, and ultimately killing the fish.

Ammonia poisoning is a major killer of aquarium fish and is most frequently seen in new setups that haven’t been allowed to cycle properly before adding the fish. The condition can also happen in a mature tank when too many tankmates are added at once, when the filtration system fails, or if the beneficial bacterial colonies die because of the use of certain medications.

You can’t see ammonia in the water. The only way to detect the presence of NH3 (unionized ammonia) is by testing the water regularly to make sure that its presence isn’t missed. Ideally, the levels of ammonia in your tank water should be zero. However, even clean tap water can contain a small amount of ammonia.

Signs of ammonia poisoning in bettas

You’ll need to know how to recognize the symptoms of ammonia poisoning in betta fish if you are to treat your pet successfully.

Symptoms of ammonia poisoning can occur acutely or over a prolonged period. Initially, your betta may gasp for air at the water surface. Your betta buddy won’t want his food, and he’ll become very lethargic, laying around on the substrate with his fins clamped to his sides.

You may notice that your fish’s gills have become a lilac or red color and have the appearance that they’re bleeding. As the poisoning continues, you betta may develop red streaks or bloody ulcers on his sides as his body tissues begin to break down. Ultimately, affected fish suffer from damage to the brain, organs, and central nervous system. Hemorrhaging occurs, and the fish ultimately dies.

Ammonia can get into your tank in several ways:

The first source of ammonia may surprise you. Chemically treated tap water actually contains ammonia. Ammonia is contained in a chemical called chloramine that is used as a disinfectant in tap water. Chloramine makes tap water safe for people to drink, but it is lethal to fish and invertebrates.

Fish waste, decomposing aquatic plants, and leftover fish food can also cause ammonia levels to rise in your betta’s tank. If you overfeed your betta and don’t clean your tank out properly, a buildup of harmful bacteria may take place, resulting in the production of ammonia, which then poisons the water.

Your betta and his tankmates can also cause rising ammonia levels in the aquarium. When your pet eats his food, his body uses the proteins contained in the nutrition to grow, and that creates a byproduct that enters the fish’s bloodstream. That metabolic process results in ammonia seeping through the fish’s gills and into the water.

How to treat ammonia poisoning in your betta

If the levels of ammonia rise above 1ppm (part per million) on a standard water testing kit, you must start remedial treatment right away.

First of all, you should lower the pH level in the water and change at least 50 percent of the water in the tank.

Treat the fresh tap water first with a dechlorinating product that is effective in treating water that contains chloramine neutralizers. These are very handy products that are specially formulated to neutralize chlorine, ammonia, and heavy metals by breaking down the chloramine and neutralizing the ammonia it binds to. Chloramine neutralizers work in two different ways:

When choosing a water test kit, check that it specifically tests for the presence of NH3 (ammonia), rather than NH4 (ammonium), which is harmless.

Make sure that the temperature of the tap water you’re using is the same as that already in the tank.

When carrying out the partial water change, make sure that you vacuum the substrate thoroughly to remove any fish waste and other debris that’s trapped in the gravel. That will get rid of a potential source of ammonia. 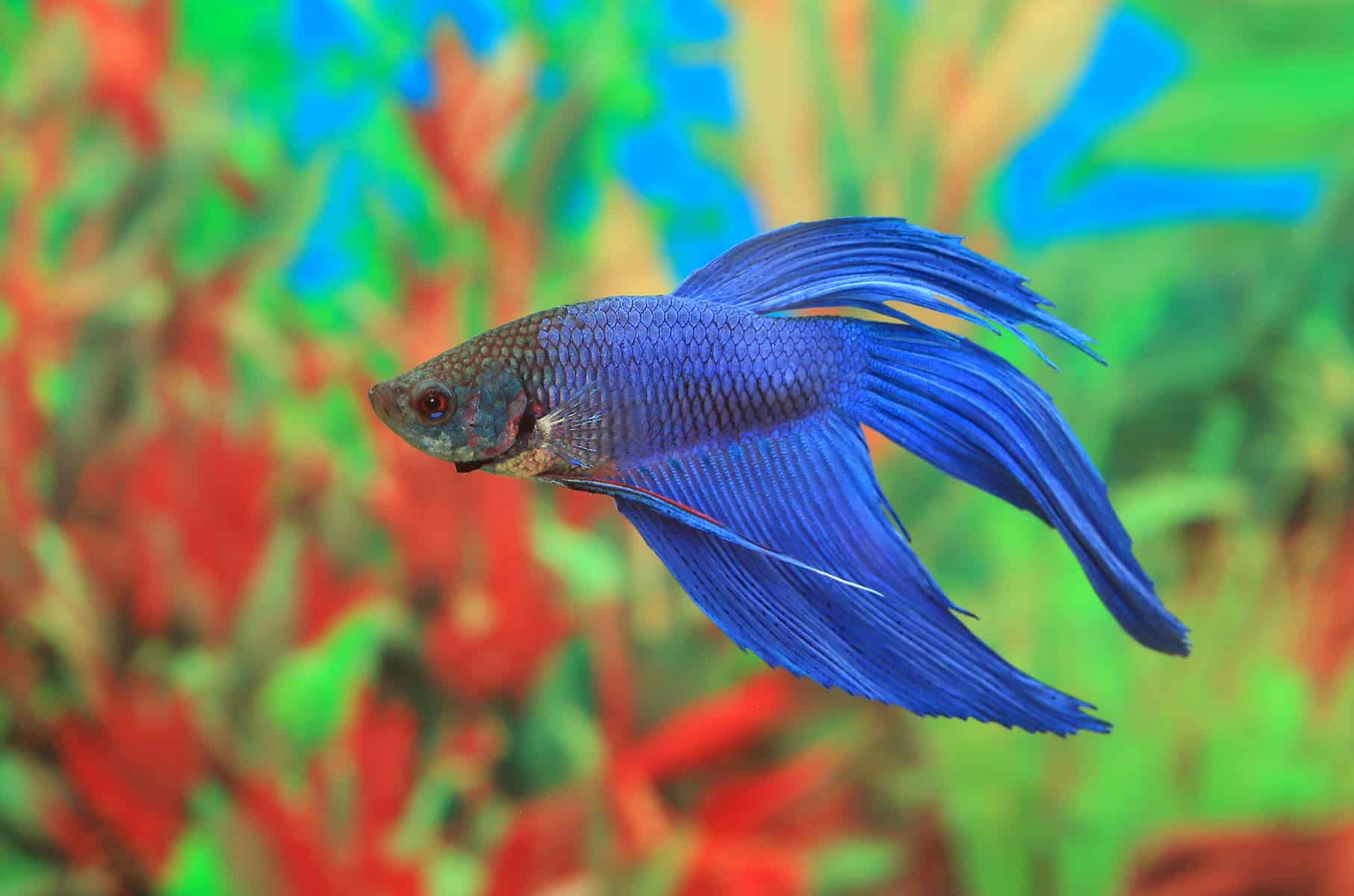 You should also check your biological filters to make sure that they are clean and not clogged with detritus that could prevent the bacteria colonies from doing their job efficiently. If necessary, replace some of the filter media.

Once you’ve changed some of the water in the tank and adjusted the pH, your betta should begin to recover, provided that you have caught the problem soon enough. Allow your pet a day or so to recover before you begin offering him food again.

Ammonia poisoning is ridiculously easy to prevent! With the right care and knowledge, you can make sure that your betta buddy never suffers from ammonia poisoning.

When starting a new aquarium, take a cup of gravel from an established tank. Although that might look dirty, it’s actually crammed full of anaerobic bacteria that will kickstart the nitrogen cycle, keeping ammonia, nitrites, and nitrate levels within acceptable, safe parameters. Add the cup of unwashed gravel to the bottom of your new tank, cover it with a couple of inches of new substrate, and fill the tank with water. If you intend to cycle the tank without fish, don’t dechlorinate the water; the bacteria in your biological filter system need ammonia to kick-off the cycling process.

The nitrogen cycle should be complete within two to three weeks. However, you must test the water to check that the ammonia level is zero before you add fish. Begin with just one fish, and then add more over the next couple of weeks to avoid overloading the cycling process. If you’re planning on adding some tankmates to keep your betta company, never overstock the tank.

Feed only small amounts of food to your betta and his companions so that uneaten food is not left to decompose and contaminate the water.

Be sure to carry out partial water changes every week or at least every other week, and remove any fish waste, dead plants, or other detritus.

Test the tank water at least twice a month so that you detect problems before they become really serious, and your betta’s health suffers.

How to treat a betta with ammonia burns

Ammonia is extremely caustic and damaging to your betta fish. Once ammonia levels in the water rise too high, the water becomes toxic to your fish.

The chemical burns the fish’s eyes, gills, fins, and skin. Even low levels of ammonia can cause the fish to produce more skin mucus, giving him a pale appearance. The mucus can also coat the fish’s gills, making it difficult for him to breathe. Ammonia burns to the fish’s skin, and internal organs can also cause internal and external bacterial infections too.

You should not try to treat your pet in the main tank. That’s because some of the antibiotic treatments that you’ll be using are harmful to the beneficial bacteria that help to rid the tank of ammonia. If you kill the bacteria, the ammonia levels in the water may spike, leading to even more problems.

Use a good quality broad-spectrum antibiotic to treat the betta in a special quarantine or isolation tank, and don’t try to offer him food until he is showing signs of recovery. Your betta should begin to recover within three to five days, although you must continue the treatment until he is eating normally again. Once you’re happy that your fish is healthy again, you can return him to the main tank.

Ammonia poisoning is frequently fatal in betta fish. However, this dangerous condition can be avoided simply by making sure that a new tank is properly cycled before adding fish, and by keeping the environment clean and healthy in the future.

Carry out partial water changes each week, treat tap water with a suitable product that neutralizes chloramine, and make sure that fish waste, uneaten food, and dead plants are removed from the tank at least once a week. Rinse the filter media through in tank water each week to remove debris that could clog the filter and prevent the bacteria contained on the filter media from processing the ammonia and nitrites in the water.

Remember to test the water twice each month so that you’re forewarned if ammonia levels begin to rise.