If you have a lonely male betta, you might want to consider getting a few friends for him. That’s a good idea, as betta fish can become bored and stressed if kept in isolation. However, bettas are known to be highly territorial, and they can be aggressive when confronted with a fish that they perceive as a threat.

Many betta enthusiasts keep Endler’s with their betta, which can work well, as long as you provide the correct habitat and take a few precautions. In this guide, we show you how.

If you’ve never seen Endler’s livebearers before, you could be forgiven for mistaking them for common guppies. That’s no surprise, as these brilliantly colored little fishes are members of the guppy family.

These lively little fishes grow to measure up to just one inch in length for males and up to two inches for females. Like most small tropical fish species, Endler’s have a short lifespan of around three years, which is a little shorter than that of a betta. Endler’s are prolific spawners, and that’s why the females of the species have a much shorter life expectancy than that of their male counterparts. However, because they are so easy to breed in your home tank, you know that you’ll never have to buy more to replace those that die, provided you have a good mix of both sexes.

Male Endler’s are brightly colored and come in a huge variety of different neon and metallic shades, ranging from red and yellow to blue and orange, purple, turquoise, and gold.

Bettas tend to regard any fish that’s brilliantly colored as a potential threat, especially if it has a flowing tail fin. However, Endler’s don’t have the same kind of floating finnage as their guppy cousins, so they don’t grab the betta’s attention in the same way.

Unless you have a short-finned Plakat, your betta will have long, flowing finnage. Although that looks gorgeous and is the primary reason why people like to keep bettas, those spectacular fins and tail do mean that the betta fish is not built for speed and is typically a very slow swimmer. In contrast, Endler’s livebearers are super-quick, flitting around the tank in a sparkling blur of activity from dawn till dusk.

So, even if your betta was a little put out by his brightly colored tankmates, he would not be able to get close enough to the Endler’s to attack them.

Endler’s are extremely active fish, especially if you have a mixture of males and females.

Male Endler’s livebearers spend much of their time chasing females and attempting to mate. That can lead to aggression between males and undoubtedly causes stress to both sexes, which can cause the fish to become sick and leaves them vulnerable to disease. To avoid that problem, you should keep one male fish to two or three females. That reduces any bullying or overenthusiastic mating behavior.

Female Endler’s are typically more aggressive than males, so to make sure that there’s no bullying between them, always keep at least three females in a group.

Endler’s are quite shy fishes and are happiest in an environment where they have plenty of hiding places, which works well when you keep them in the same environment as a betta, as the livebearers will quickly get out of harm’s way if necessary.

The success of adding any other fish species to a betta tank largely depends on your betta’s temperament. Some bettas are chilled out dudes, whereas others could start a fight in an empty aquarium! 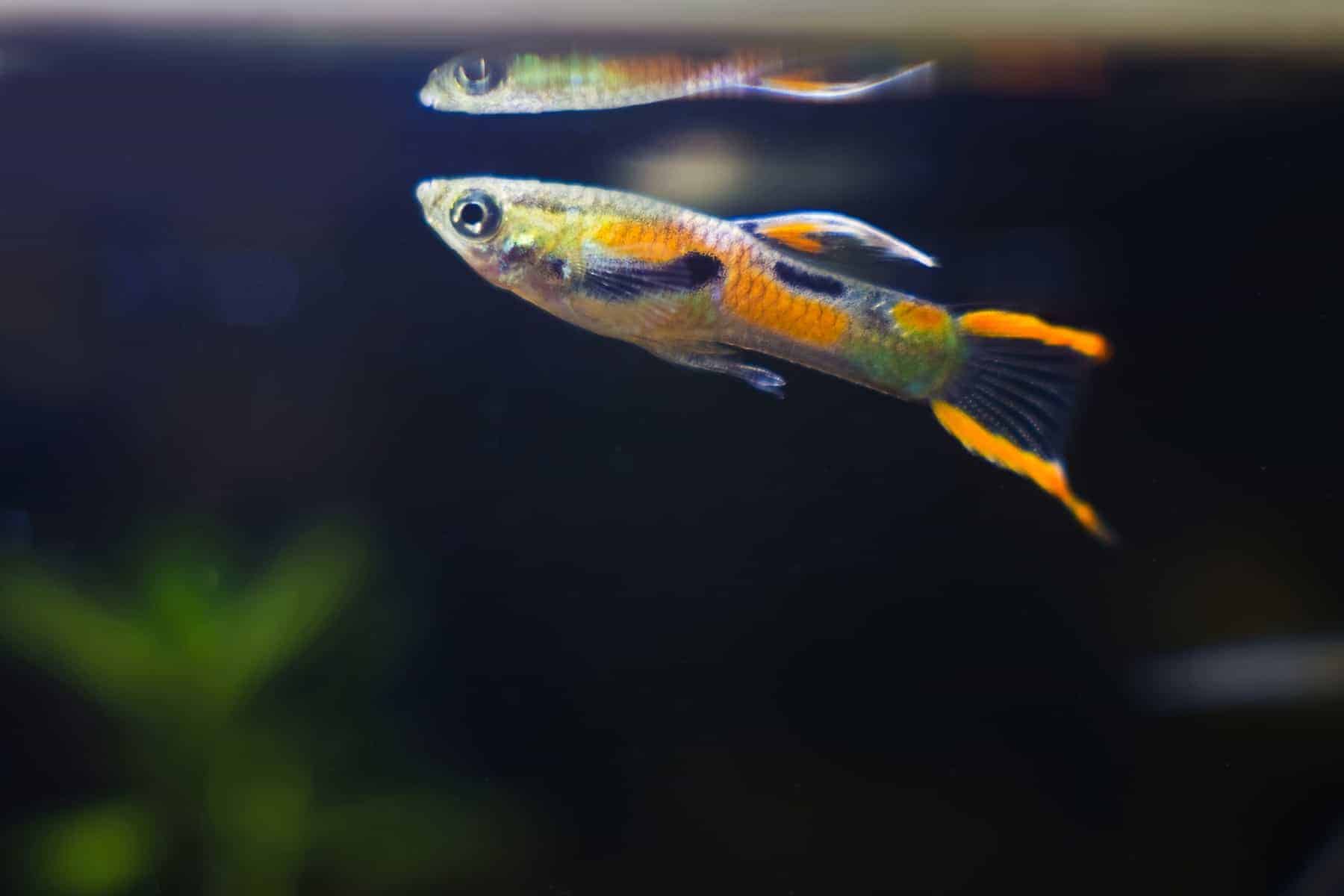 Introducing Endler’s to your betta

Generally, a betta will be more aggressive if new fish are introduced to an existing tank that he views as his territory, and for that reason, most people recommend adding a betta to an already established community tank, rather than the other way around.

Sometimes, using a tank divider can be effective if your tank is large enough. The betta can check out the Endler’s without actually being in the same water space. After a few days, try removing the divider. Hopefully, the betta will simply ignore the Endler’s, and life can carry on peacefully.

If you already have an established tank containing a betta, you could try removing your fishy friend and rearranging the decoration in the tank while he’s being kept elsewhere. Put the Endler’s into the tank, allow them to settle down, and then put your betta fish back into the redecorated aquarium. This technique presents the betta with what he perceives to be a new habitat, and he will be less likely to get angsty with the Endler’s.

Finally, buying a very young betta, and adding him to the tank can be a great tactic, as young bettas are less aggressive and sure of themselves than older specimens.

Fortunately, Endler’s and betta fish share very similar habitat preferences, so it’s pretty straightforward to set up a tank that suits both parties.

Endler’s are live in nano tanks and those that are five gallons or greater. However, you’ll need a tank of at least ten gallons if you want to keep a betta too. The bigger the aquarium, the more space the fish will have, and the less likely it is that your betta will be aggressive.

Although neither species are especially dirty fish, you should still have an efficient filtration system in the tank to keep the water clean. Both betta fish and livebearers are weak swimmers, so you need to set your pump to a moderate to slow flow rate so that the fish don’t get buffeted around by the current, which would stress them.

Note that Endler’s livebearers are extremely sensitive to changes in the water conditions of their environment and are likely to lose their color intensity if the water parameters are unstable.

Both species like a heavily planted tank. Bettas like to have broad-leaved plants on which to rest, and Endler’s need plenty of deep-cover that they can use as hiding places. Floating plants also work well, as bettas can use them for building bubble nests, and Endler’s can hide within the safety of the plants’ dangling roots. Also, if you want to preserve some of your Endler’s fry, floating plants make the perfect nursery area for the babies.

Both bettas and Endler’s love to hide, so be sure to provide lots of rocky overhangs, caves, and tunnels. Your betta will most likely adopt one particular cave as his territory, and that can help to prevent him from becoming aggressive toward the Endler’s.

The substrate that you choose can be fine gravel or sandy. Although your betta spends most of his time at the top of the water column, he will occasionally venture down to the bottom, and large gravel can sometimes contain sharp pieces that could injure your betta’s flowing fins.

Bettas are happy with regular, moderate lighting. However, Endler’s do not tolerate intense light, and they will lose their bright coloring if kept in a tank where the lighting is too bright. You can mitigate the light intensity in the aquarium by using thick planting to provide shade.

Bettas and Endler’s do not share exactly the same dietary requirements. Both species are omnivores, although bettas need much more meat in their diet than plant matter.

That being said, if you feed your betta live and frozen brine shrimp, bloodworms, daphnia, and mosquito larvae, the Endler’s will tuck into those too. So, your betta is a surface feeder, and his staple diet should consist of floating betta pellets and the aforementioned meaty foods. Endler’s livebearers will do well on regular tropical fish flakes or guppy food. Endler’s will graze on any algae that are growing on the surfaces within your tank, as well as enjoying shelled peas and blanched zucchini and cucumber, which your betta will also eat.

You may need to feed your fish at separate ends of the tank so that they don’t start competing for food. If that doesn’t work, you’ll need to net your betta and put him in a small breeding tank while he’s fed. 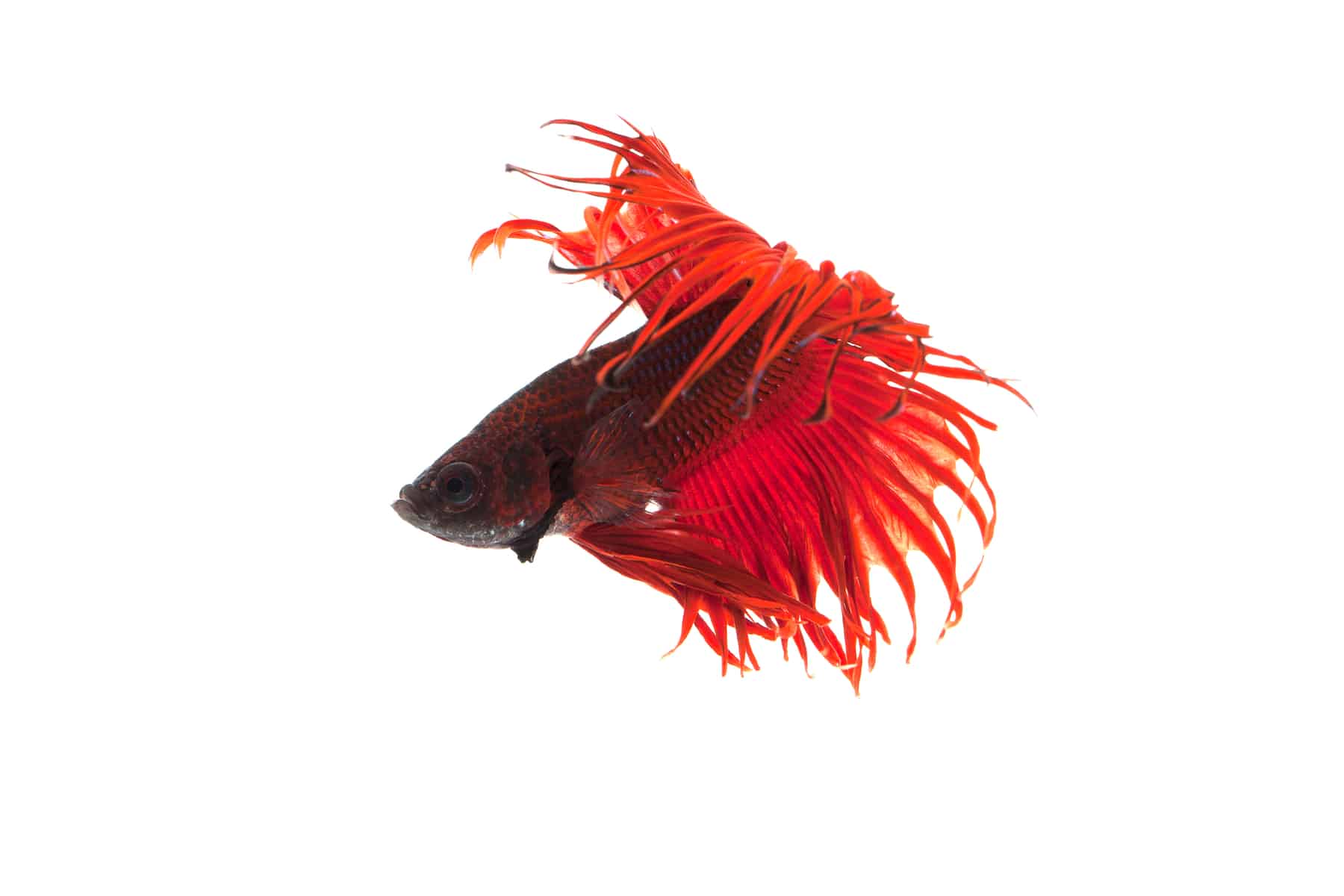 As previously mentioned, Endler’s livebearers breed prolifically, spawning as often as every three weeks and giving birth to live young rather than laying eggs.

It’s likely that your betta will eat quite a lot of the fry, and Endler’s are not averse to cannibalism either. However, you should finish up with a few surviving fry to add to your collection. If you don’t want the fish to breed, simply choose a bunch of all-male fish and keep a single-sex tank.

Endler’s are closely related to common guppies, and they do look quite similar. So, when you go shopping for your fish, always be sure that you are buying the correct species.

Look carefully at the fish, and you’ll see that the males are more vibrantly colored than the females. Some of the fish will have slightly transparent tails, which also sets them apart from guppies. Male guppies have most of their coloration in their tails, which also tend to be quite luxuriant and large in relation to the size of the fish, making them a target for a betta fish.

Provided that you set up your tank correctly with lots of thick planting and places where both species can hide, your betta buddy should be fine in a community that includes Endler’s livebearers. If all goes well, a small school of vibrantly colored Endler’s can look absolutely stunning when darting here and there around the tank, making the perfect foil for your glamorous betta and his floating finnage.

Endler’s are not aggressive toward other fish species, and your betta probably won’t trouble them, as long as you have a large tank with plenty of space for the betta to establish a territory that the livebearers won’t encroach upon. Both species share the same basic requirements when it comes to water conditions, too, and they are reasonably compatible diet-wise too.