Velvet is one of the most common ailments to affect Bettas. And, it can quickly move through a fish room and infect every fish before you know your fish is even sick. Early discovery and treatment is the key to successful treatment and fish recovery. This disease is also known as Rust or Gold Dust disease and it is caused by one of several species of a tiny parasite known as Piscinoodinium.

Piscinoodinium parasites are partly photosynthetic. The organism contains chlorophyll which gives the parasite its typical gold or rust color and enables it to produce its food. So while they do derive some nutrition from their host aquarium fish, they also need light to survive.

The damage the freshwater velvet parasites cause to the skin when they burst weakens the fish. It allows secondary infections to develop and reduces the ability of your fish to maintain a proper balance of salts and water in the body, causing osmotic stress.

Oodinium is a dinoflagellate, a single-celled organism that appears as a pear-shaped golden-brown cell, 125-130 micrometers in length. It is covered by cilia and has two flagella, one of which is much longer than the other. Inside, there is a nucleus, about 12 micrometers in diameter. Flagella and cilia propel the parasite through the water. The parasite finds a fish and adheres to it using the flagella.

The life cycle of this parasite includes four stages. The cycle plays out in 10–14 days at 73–77°F, but lower temperatures will slow that cycle down.

The first stage is the feeding stage. The dinoflagellate parasite attaches to fish, then becomes a cyst, which penetrates the skin, blood as well as the soft tissue of the gills. The cysts proceed to destroy cells and feed on the nutrients inside. It grows under the skin until it leaves its host. 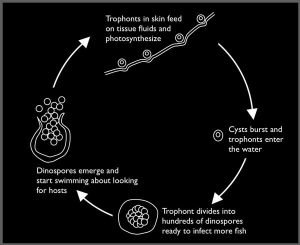 Infecting the gills is one of the things that make Velvet different than a similar disease called Ick. This cyst stage is highly resistant to chemical treatment. It is not unusual to need several applications of a treatment to eliminate the parasite.

When the mature parasite leaves the host into the water, it enters the next stage. Once it drops to the bottom of the aquarium or into plants the third stage begins where it enters reproduction.

The parasite forms a cyst at this point too, that enables it to survive adverse conditions. This stage is also very resistant to chemical treatment. The cyst divides and forms between 34 and 64 new cells whereupon the membrane bursts freeing the cells into the aquarium and entering the final stage.

During this fourth stage, the free-swimming organisms are called a dinospore. A dinospore has two flagella, one of which is covered by a body fold and has a reddish eye. Cilia and flagella propel a dinaspore through the water. The dinospores swim about seeking a host and will try to attach to a fish within 70 hours – this is the infectious and treatable stage. They must find a host within 24 hours, or die.

Once on a host, dinospores burrow into the epithelial layer of the skin and fins and the life cycle begins all over again. 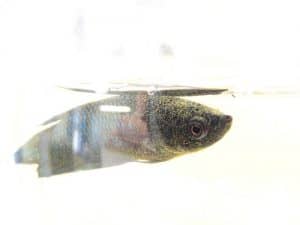 To see Velvet on fish you have to look real hard and close, and often a flashlight will help you see it. The alternative name, Gold Dust Disease, comes from the fine powder that covers the fish, which appears gold under a flashlight. Fins become clamped and appear almost glued and stiff. This is usually the first sign you will see,  Because the parasite also gets into the gills, you often will see heavier breathing.

To rid themselves of the parasite many fish will “flash” or glance off objects to dislodge them.  As a breeder, you might catch the disease until they stop eating. It is worth noting that sick fish do not lose appetite until their death.

Parasites that damage the epithelial layer of the skin and fins cause excessive mucous production and disrupt gas exchange in the skin. This can be very dangerous for young fry whose gill apparatus is not yet well-developed and oxygen enrichment of blood is carried out mainly through the skin.

Oödinium is always present in small numbers in water systems and healthy fish resist a major attack. But stress like shipping, poor water quality and temperatures that vary or get cool are prime stressors that seem to bring on the disease in Bettas. Affected fish often go off food and die. It tends to be more a problem for young fish as well.

Since Bettas are prone to this parasite, you need to always be on the lookout for it. If caught early it is very easy to cure. But, if it gets to advanced stages you may not be able to save the fish. Because Velvet is highly contagious and often takes a while to diagnose, it is important to take steps to treat it as soon as possible. Treatment targets the free-swimming stage of the parasite because the other stages are resistant to medication.

It should also kill the parasites which have infested the outer layer of the skin and fins but will fail to eradicate any parasites that have burrowed into the epithelial layer. The best time to attack velvet is when the parasite leaves the fish, so raising the temperature helps. That is why you should create conditions optimal for the parasites’ growth and multiplication and at the same time use the treatment aimed at dealing with them.

If you prolong the course of treatment by prolonging the time when medication is administered, you risk poisoning the fish.

Sick fish can be treated either in a separate hospital tank, in a main tank or barrack system or since we are talking about Bettas, beanies. Things to consider are plants, snails and biological filtration. If you are treating a filtered tank or barrack system, discontinue carbon filtration during treatment. Be aware that many of these medicines can damage other plants and invertebrates that may be living in your tank as well as destroy biological filtration. 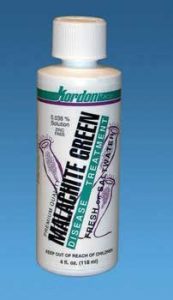 Control diseases caused by external fungi and parasites on fishes. It contains zinc-free, chloride salt of malachite green. Use 1 teaspoon per 10 gallons of marine or freshwater.

Use this with caution as Malachite Green is toxic… poisoning your fish, the “good guy” bacteria populations in your system, as well as and hopefully, to a lesser extent, the Velvet you want to be rid of. To take care not to spill or splash because this stuff WILL stain blueish and is a pain to get stains out of clothing, skin and especially aquarium silicone. Malachite Green should be utilized in a separate treatment tank as it is quickly absorbed by detritus, natural gravels, and almost all plastics.

Malachite Green’s toxicity is temperature and pH-dependent, being more toxic with rising temperatures and lower pH. One surprising bit of information is  Malachite use is its inactivation (oxidation) with exposure to light. Malachite Green treated systems should have their lights turned off. This is rarely mentioned with product labels or inserts.

Copper is the treatment of choice.  But use care, copper is a toxin and can poison and kill a fish if overdosed. Products like  Aquarisol by Aquarium Products and Copper Safe by Mardel are easy to get at local fish shops and handy to keep on hand.

Coppersafe is a unique stabilized form of chelated copper designed to maintain a therapeutic level of copper that is safe for fish but effective against parasites. It is affected by hardness; use with caution can be toxic to fish and inverts.

Per the manufacturer: CopperSafe, when used as directed, maintains a total copper level of 1.5 ppm to 2.0 ppm in the water. CopperSafe remains active for over one month in an aquarium. Levels of 0.3 ppm free copper are recommended in the literature for therapeutic use, but with Coppersafe, the levels of free copper will be measured at 1.5 ppm to 2.0 ppm. This level of copper can be used in the treatment of fish due to Coppersafe’s unique chelating agent. The chelating agent binds with the copper making it nontoxic to fish but effective against parasites. CopperSafe does not discolor the water and will not interfere with the biological filter. Coppersafe is safe to use with UV Sterilizers, Protein Skimmers, Wet/Dry and Diatomaceous earth filters. After treatment, Coppersafe can be removed from the aquarium by water changes, fresh, activated carbon or other chemical filtration resins/pad

Dosage on the bottle is 1 ml treat up to 18 gallons. I have used 1 drop of Aquarisol per beanie to treat Velvet, and I often add 1 drop to a gallon of water when shipping to keep Velvet at bay. Do not use on invertebrate. I like to use this as a  SANITARY NET DIP. Use one teaspoon per 10 gallons of water. This is also affected by hardness so care must be used as it can be toxic to fish and inverts.

In case you missed it, copper meds will kill invertebrates. Plus, they can be difficult to remove from a tank. Silicon, gravel, and other porous stuff in a tank can absorb the Copper. It will continue to leach back out over time, even after you’ve changed all the water and are running carbon. So, this is definitely a med for QT only.

This is a messy medication. It stains everything it touches yellow and I find it a pain to work with. The general consensus on the internet is it can cause infertility issues in fish and my results using the medicine support that. Use this treatment only in a glass, medical-grade container that you can bleach when finished. Use in tanks and with beanies or Plexi barracks will give you stains that can not be removed. It can be used at 1 ml Acriflavine (trypaflavine) per liter aquarium water.

Copper. Use according to the manufacturer’s instructions for a full ten days to ensure complete eradication. Atabrine (Quinacrine hydrochloride) is another medication that can be used to treat Velvet.
Because Oödinium is dependant on light, dimming the aquarium lights aids in eliminating the infestation. Increasing the water temperature to 82°F will speed the process, and adding salt to the water will ease the labored breathing caused by the destruction of gill tissue. As with any treatment, you should remove activated carbon from the filter, as it will remove the drugs from the water.

The photo of the fish with Velvet comes from a post by TheLittleMiss. A special thanks for allowing us to use it.

This article in particular from the University of Florida Tropical Aquaculture Laboratory deals with the disease.