The scorpion betta might have a ferocious name, but it is harmless to humans! These fish are a type of wild betta and are favored for their small size and natural colorations compared to domesticated breeds of Betta splendens.

Though classified as a wild betta, scorpion bettas are no more difficult to keep than Betta splendens but can offer a unique spin to the traditional betta fish tank.

Keep reading to find out everything you need to know about the scorpion betta and how to keep one of these beautiful fish in your own aquarium! 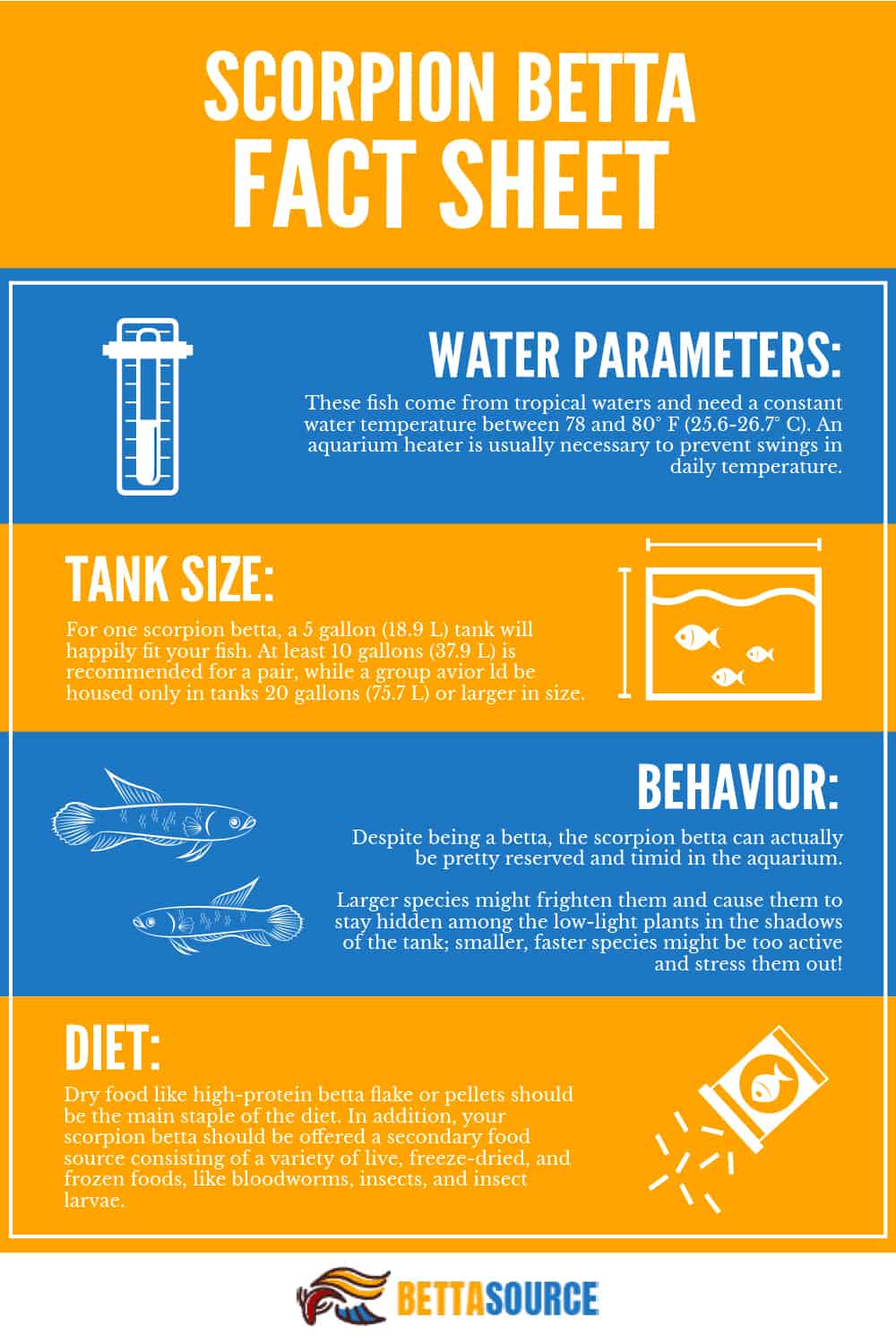 Betta brownorum, also known as the scorpion betta, is a wild betta that is part of the Betta coccina complex; a species complex comprises one or more species that share many of the same characteristics.

In the case of the scorpion betta, B. coccina, B. livida, B. rutilans, B. tussyae, B. persephone, B. burdigala, B. brownorum, B. uberis, B. hendra, and B. miniopinna all share similar traits and can be easily confused with one another.

As of now, Betta brownorum is its own species, but this is always subject to change.

Is the scorpion betta venomous?

Given its common name, you might get the wrong impression that your fish is dangerous. Luckily, this isn’t the case.

The origin of the name of the scorpion betta is unclear. Usually, the fish is sold under its scientific name, Betta brownorum.

The scorpion betta has a minimal range in the south and west regions of the Sarawak state in Malaysia; some outlying populations have been documented in Kalimantan Barat in Indonesia.

There, they live in slow-moving peat moss forests with blackwater conditions. This water is highly acidic, with dense overhanging vegetation, fallen tree branches, and a few inches of leaf litter covering the substrate.

Unfortunately, logging and housing development near their natural ecosystems have left the scorpion betta listed as a vulnerable species by the IUCN Red List.

As mentioned before, the scorpion betta can be a little difficult to identify since its body colors are similar to several other species within its species complex.

Correctly identifying the scorpion betta can be even more challenging as their iridescent green body spot varies in size, color, and intensity depending on their location of origin. The scorpion betta has an attractive deep-red body and a bright green-blue spot on both sides of its body; both male and female fish will have this spot. These fish may also have white tips to their pelvic fins, though this can be difficult to see.

The maximum size is around 2.5 inches (6.4 cm) which is typical for the species complex, though smaller than the average domesticated Betta splendens.

Many hobbyists believe that the easiest way to tell this wild betta apart from the others is by measuring the size of their spot. A true scorpion betta will have a larger spot than the other species within this complex, though this can be hard to gauge if not placed side-by-side.

The best way to ensure that you’re getting a scorpion betta is by going to a reputable breeder, as most times it’s challenging to tell the species apart.

Because the scorpion betta comes from locations of the world with such exact environmental conditions as listed above, it’s usually necessary to match those conditions as best as possible.

The ideal scorpion betta aquarium will have blackwater conditions with lots of natural coverage and low pH.

Fill your betta’s tank with plenty of leaf litter, driftwood, and floating aquatic plant species, and allow tannins to stain the water brown.

Use a dim light to further recreate the dark waters of peat moss swamps.

The natural tannins should help keep your water at an optimal pH range of about 3.0-4.0, though other methods may be needed to keep pH down.

It should be noted that some hobbyists have had luck adapting their wild bettas to higher pH levels, though this should be done slowly.

These fish come from tropical waters and need a constant water temperature between 78 and 80° F (25.6-26.7° C). An aquarium heater is usually necessary to prevent swings in daily temperature.

The scorpion betta is a relatively peaceful species of betta that hobbyists like to keep in pairs or groups. The number of fish per tank depends on the size of the tank.

Remember, scorpion bettas come from slow-moving to standstill water conditions. This means that water flow should be minimal in your aquarium.

Most wild betta fish keepers use sponge filters to provide enough surface area for beneficial bacteria to grow while keeping water movement to a minimum.

You should also use an aquarium lid or hood with wild bettas as they can be excellent jumpers.

It is important to keep some space between the surface of the water and the lid as wild bettas are labyrinth fish, just like Betta splendens.

While betta fish primarily use their labyrinth organ when oxygen levels are low in the water, they need to come up now and then for air, even if water conditions are optimal. 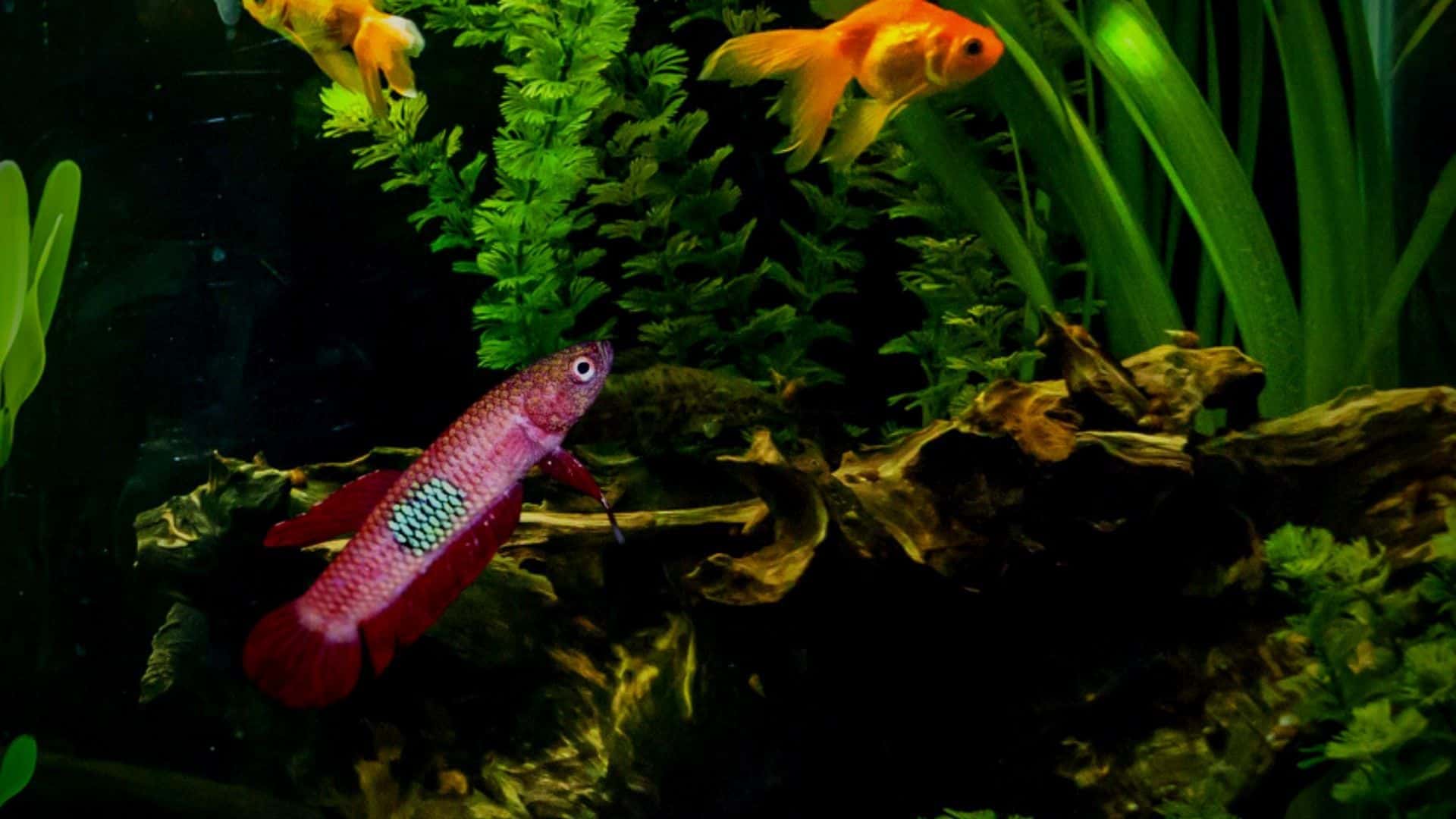 Possible tank mates can be tricky for wild bettas, including the scorpion betta.

Most hobbyists know that Betta splendens can’t be kept with each other or with most other fish species. This is because these fish have been bred over the course of centuries to exhibit increased levels of aggression.

This contrasts with the less aggressive scorpion betta, which only really shows aggression when defending territory or claiming a mate.

As a result, some hobbyists have had luck keeping scorpion bettas with the same species and other species.

Can wild bettas live together?

Some hobbyists wouldn’t dare to place more than one scorpion betta in the same standard community tank, while others have large groups that have lived peacefully together for years.

In general, you can keep scorpion bettas alone, in pairs, in a harem setting (severals female for one male), or in larger groups, with mild success.

With more fish comes a bigger tank and more areas for coverage to increase chances of compatibility.

If you want to keep your scorpion betta fish with other species outside of the Betta genus, then it is recommended to do a biotope aquarium with native species that would be found in the same habitat.

Despite being a betta, the scorpion betta can actually be pretty reserved and timid in the aquarium.

Larger species might frighten them and cause them to stay hidden among the low-light plants in the shadows of the tank; smaller, faster species might be too active and stress them out!

A relaxed betta will be in the front of your tank, exploring all levels of the aquarium.

In the wild, wild bettas are primarily carnivores, even though they are largely labeled as omnivores. This means that they will enjoy a meat-based diet with a veggie snack every now and then.

Dry food like high-protein betta flake or pellets should be the main staple of the diet. In addition, your scorpion betta should be offered a secondary food source consisting of a variety of live, freeze-dried, and frozen foods, like bloodworms, insects, and insect larvae.

Some hobbyists have difficulty getting their scorpion betta to accept non-living foods, especially if they are wild-caught. In this case, it is recommended to stop feedings for a couple of days and then resume with the preferred diet.

Other hobbyists have problems with bettas that overeat and become overweight and constipated as a result. So, for the healthiest betta, only give your fish what it needs!

While breeding scorpion bettas isn’t as big of a market as breeding other designer Betta splendens, there’s definitely a niche of hobbyists who love preserving wild bloodlines.

Like any species of betta fish, breeding scorpion bettas can be difficult for an inexperienced hobbyist; however, if you’ve bred betta fish before, it’s no different.

Betta fish are bubble nesters, which means that the male will create a bubble nest at the top of the water, sometimes under a broad plant leaf.

The male and female will then intertwine, and about 20-50 fertilized eggs will be transferred to the nest; this process has been known to take different amounts of time, ranging from a matter of hours to days.

The male betta fish will continue to guard the nest until the fry hatch and are free-swimming several days later.

Adults will usually leave the fry alone, but remove them from the tank if you want a higher yield. Feed them micro-foods until they are large enough to accept more substantial motile foods.

The scorpion betta is a beautiful dark-red wild betta fish closely related to several other species that can be difficult to tell apart.

These fish are more docile than their Betta splendens cousins but need extra consideration like plenty of cover to recreate their acidic, blackwater conditions.

If you have any questions about scorpion bettas, other wild betta species, or have had experience keeping a related betta in the Betta coccina species complex, don’t hesitate to leave a comment below!