Betta Siamorientalis is a fairly new species belonging to the Betta splendens. Also referred to as Betta Kabinburi, the name Betta siamorientalis: comes from Siam, the former name for Thailand, and Orientalis, meaning ‘of the east’ because this species lives in eastern Thailand.

This species of Betta is similar to other Betta Splendens within the group, but how do they differ?

Read on to find out more about this new species!

Betta siamorientalis has been found in Chachoengsao Sa Kaeo, Chon Buri, and Prachin Buri provinces in eastern Thailand. as well as one province in Cambodia that borders Sa Kaeo.

These are currently the only known regions in which Betta Siamorientalis have been found.

Like other Bettas in the splendens group, Betta Siamorientalis live in slow water types such as marshes, rice paddies, ponds, canals, and more.

Betta Siamorientalis can be found around thick vegetation at the water’s edge of these shallow freshwater marshes, ponds, canals, lagoons, etc…

They use plants as shelter to build their bubble nests and participate in courtship activities and mating.

Betta Siamorientalis appears similar to other Betta Splendens but has a specific combination of characters that make it different. They typically have a dark brown to black body, black opercle, and two parallel red vertical bars.

They also have red patches on their opercle, caudal fins with a red crescent and a black edge, a black pelvic fin, red on the base of the pelvic fin, and a white tip.

They grow to a maximum size of 2.3 inches in length.

The Differences Between Males and Females

Like other Betta Spelndens, males tend to be more colorful than females. Males also develop fins that are larger and more extensive.

Betta Siamorientalis looks very similar to Betta Imbellis, so much so that it is known as the “black imbellis” due to its black body color.

Betta Siamorientalis is included in the Betta splendens and has similar characteristics like a brightly colored body, slender body, red or brown caudal fins, and more.

The average lifespan of a domesticated betta is 2 to 3 years. However, betta fish have been known to live up to 10 years. You can increase the lifespan of your betta in the following ways:

Betta Siamorientalis are carnivorous tropical fish. In the wild, they feed on insects and invertebrates.

Fish in an aquarium environment will do best with a balanced diet of frozen foods like daphnia and bloodworms, small insects like crickets, fish flakes, and vegetables.

How To Feed Your Betta siamorientalis

Just like any Betta splenden, they require food that is high in protein. To keep your Betta happy and healthy, feed them pellets or flakes once or twice a day. Freeze-dried or fresh food can be fed 1 to 2 days a week.

Bettas should only be fed 1 to 2 times a day. They are very greedy eaters and will eat until they make themselves sick. Overfeeding can lead to many serious health conditions for your fish.

Like with any other Betta, it’s important to take any excess food from your tank to prevent any decline in water quality.

The tank size necessary for a single male is 5 to 10 gallons; for a pair, the tank should be at least 20 gallons in size. A tank lid is necessary for your Bettas because they are known for jumping, but a tank lid will also keep the water at the same temperature as the air.

Like other Betta splendens, Betta Siamorientalis thrives in a water temperature of 76 to 82 degrees. Low temperatures can weaken your fish’s immune system and lead to illness or death.

Betta Siamorientalis like a neutral PH. The optimal PH range is 6.8- 7.4. It’s important to check water PH regularly to ensure healthy fish. PH can be changed by substrate type, water type used in the tank, and decorations.

To provide ideal water quality, a filter is crucial. Betta Siamorientalis do not like fast-moving water, however. So, any filter you choose must be able to provide water flow similar to their natural environment.

Bettas do need light but not a lot of it, especially because the Betta Siamorientalis live in a heavily vegetated habitat in the wild. Plants are vital in providing shade and hiding space for your fish.

Live plants can have many benefits in an aquarium. They provide hiding places, rest places, breeding places, and more. Live plants are generally safer for Bettas because plastic plants can be hard and cause fin damage.

Like other Betta splendens, Betta Siamorientalis males are known to be aggressive. To keep them in a community tank, they need to be kept with smaller peaceful species or one male with a female or multiple females.

With a big enough tank and enough hiding places, it is possible to keep multiple males, however.

Many peaceful species of smaller fish would make great tankmates for your Betta Siamorientalis. Small peaceful fish such as loaches, barbs, rasboras, tetras, and more would be suitable tank mates.

Similar to all betta splendens, betta siamorientalis is also a species of bubble nester. To prepare your pair for mating, feed high-quality protein-rich foods.

A separate tank can be used for breeding if desired. If the pair don’t already live together, they need to be introduced to one another.

Once the pair are ready to breed, the male will begin to build his bubble nest. The color of the female’s body will become pale with dark bars. The pair will then embrace and mate.

The female will release her eggs which the male will transfer to the bubble nest and guard until they hatch. The eggs hatch within 24 to 48 hours and stay in the nest for 3 to 4 days.

Once the fry can swim freely, it will leave the entire nest. Give small amounts of food 2-3 times daily for ideal fry growth. 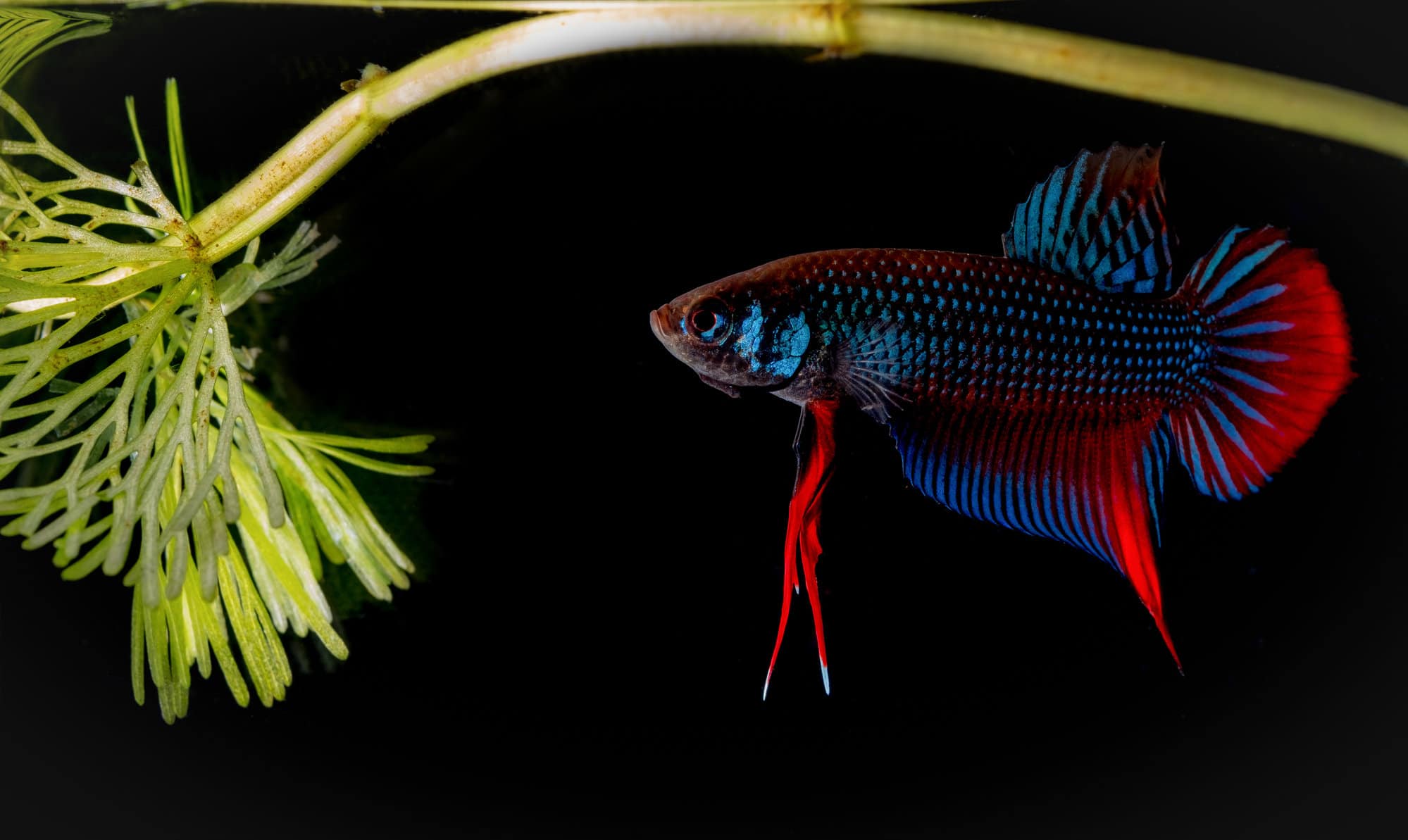 Betta Siamorientalis suffers from disease and illness just like other Betta splendens. The good news is that many of these diseases are preventable or easily treatable. Here are 12 common diseases and their treatments.

Fin and tail rot are caused by bacteria or fungi that rot the fins and tails of your betta. Fin and tail rot can be prevented by keeping the tank clean. It can easily be treated with antibiotics.

Columnaris is a bacterial disease that causes fins to fray. It also produces skin lesions, white spots on the mouth, cotton-like growth on the mouth, fins, scales, and discoloration of the gills.

Columnairs can be prevented by avoiding limited oxygen, water hardness, and overcrowding. Columnairs can be treated with antibiotics, but if it isn’t treated quickly, fish can die within 72 hours.

Hemorrhagic, or redmouth, causes bleeding in the mouth and eyes of your fish. This illness is caused by bacteria and is treated with antibiotics. Hemorrhagic is caused by infected aquarium water.

Pop eye is a viral infection that causes swelling of the eyes. The pop eye can be a symptom of an underlying disease. It can be prevented by preventing infection. Antibiotics are used to treat the pop eye with success.

Eye cloud or the cloudy cornea is an illness that causes white films on the fish’s eyes. Eye cloud is caused by poor water quality and can be treated with antibiotics. If not treated, it can cause vision impairment.

Even though it’s called mouth fungus, this is actually a bacterial disease. Mouth Fungus causes white lines around the lips and mouth of your fish. This is caused by poor water quality and can be treated with antibiotics but can kill an infected fish if not treated quickly.

Furunculosis is a bacterial disease that causes ulcers and sores on the fins and tail of fish. Furunculosis is caused by poor water quality and can be cured with antibiotics but can also kill a fish if not treated quickly.

As the name suggests, fish fungus is a fungal disease that comes from previous infections. Fish fungus creates cotton-like fuzz, film, or slime on the fish’s skin.

The fish fungus can be prevented by avoiding infections and injury and optimizing water quality. Antibiotics can cure fish fungus.

A fish infected with Velvet has a rusty look to its skin and black spots on its body. This parasitic illness can be prevented by avoiding poor water quality. Velvet is very contagious but easily treated with antibiotics.

If velvet isn’t treated quickly, the fish will die within days.

Anchor worms are parasites that attack the fins or tails of fish. They will appear red and swollen with a slimy appearance.

It can be prevented by maintaining ideal water conditions and feeding fiber-rich foods. It can be treated by raising the water temperature.

Tumors can be cancerous or benign lumps, bumps, or growths under the fish’s skin. They typically affect reproductive organs, the tail, belly, and gills. Viral infections and mutations in genes cause them.

Tumors can be prevented by feeding healthy foods, keeping the tank clean, and treating underlying infections.

Malignant tumors are hard to cure, but surgical operations can help. Benign tumors can be treated in many ways depending on the cause.

Betta Siamorientalis can add a wonderful variety of colors and personalities to your tank.

Although Betta Siamorentalis is a newer found species of the betta splendens, their care is simple.

Like other Betta splendens, they will live a healthy life with the proper tank setup, water conditions, maintenance, and care.