Betta fish (or Siamese Fighting Fish, as they are sometimes called) don’t breathe exactly as other fish do. They have a special respiratory organ that most other species lack, called the labyrinth organ.

As we’ll see, these fish have developed a labyrinth organ in response to their natural environment. In the aquarium, some extra care is needed when dosing medications for labyrinth fish in particular.

Keep reading to find out everything you need to know about labyrinth organs and how betta fish use theirs!

What is the labyrinth organ?

The labyrinth organ is unique to the suborder of Anabantoidei fish, which includes the betta fish (Betta splendens).

In simple terms, this organ is a highly folded organ designed to act as a lung, processing atmospheric air taken in at the water’s surface.

This freshwater species of fish still process dissolved oxygen that is already available in the water through their gills. However, the labyrinth organ enables them to better survive in their natural habitats.

Within the folds of this lung-like organ are boney plates called lamellae. These have thin membranes which facilitate the movement of oxygen into the bloodstream.

Labyrinth fish are primarily found throughout Asia and Africa. The betta is a common fish native to parts of Cambodia, Vietnam, and Thailand. Most species are bubble nesters.

Interestingly, this strange organ can take some time to develop, and most fish rely only on their gills for oxygen intake for several months or years before maturing.

Why do betta fish have a labyrinth organ? 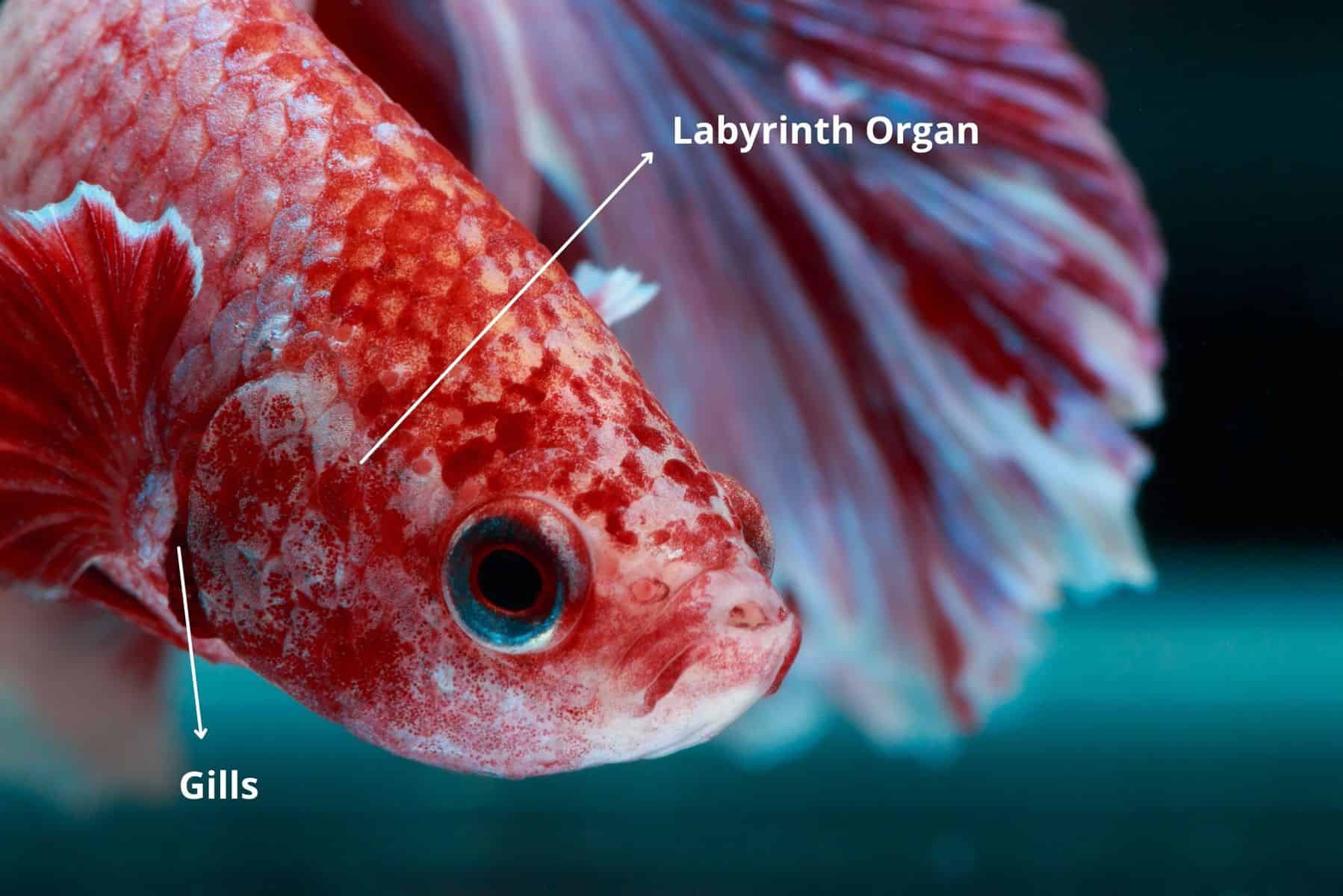 The purpose of the labyrinth organ is to allow fish a secondary source of oxygen in case water conditions are poor.

Betta fish evolved the labyrinth organ in response to their natural low-oxygen environment. These fish can be found in shallow, slow-moving, murky waters in the wild.

In comparison, water in shallow streams with high oxygen levels is typically fast-moving and clear. The constant agitation at the water’s surface greatly helps gases move in and out of the water.

However, betta fish don’t live in these areas. Instead, their natural habitat consists of small puddles, rice paddies, and ponds only a few inches deep. At times, these fish are stuck in these conditions for extended periods.

In response, wild betta fish evolved a specialized labyrinth organ that allows them to thrive in these conditions. When oxygen levels get low, the fish simply has to swim to the water surface and take in a breath of air.

How to increase oxygen levels in your betta fish tank

As we mentioned, water is oxygenated when there are high gas exchange rates through water surface agitation. This happens in fast-flowing water, a condition not preferred by your betta.

However, if you find that your betta fish is taking gulps of air at the water surface, then you might not have enough water flow or oxygenated water in your aquarium.

But how can you increase water flow without hurting the delicate fins of your fish?

An air stone is the simplest solution to low gas exchange rates as long as the tank is large enough.

An air stone is a porous piece of rock attached to an air pump. Air is driven through the stone to create tons of little bubbles that float to the water surface and break the surface tension.

This surface agitation allows for gas exchange and water circulation without being overly powerful for your betta fish like a stronger filter would.

However, air pumps can also be overly strong for betta fish, especially in standard fish tanks under 5 gallons (22.7 L) in capacity.

If you’re unable to add any more equipment to your betta tank, then you will need to make up for it with more water changes.

Removing the water from the tank breaks water surface tension, and oxygen is introduced when tap water is returned to the aquarium.

While extremely beneficial for the aquarium, daily water changes can take considerable time and effort.

Bettas are the most well-known type of fish to have a labyrinth organ but are certainly not the only ones.

Taxonomically, a suborder of the fish kingdom contains a large group of individuals. Did you know that some of these include the gourami?

Some of the most popular gourami species in the aquarium hobby include:

Though similar, betta fish and gouramis should never be kept together in a community fish tank. For all the reasons why and tank mates for each, make sure to check out our article here.

Labyrinth organ care in the aquarium

Even though these beautiful fish can survive without optimal water quality, this doesn’t mean that they can be left in dirty fish tanks.

Most betta fish in the aquarium hobby have been captive-bred. This means they are used to relatively clean water and an enriched environment and are still susceptible to ammonia or nitrite poisoning.

Similar to why betta fish can’t be kept in fish bowls, these domestic betta fish need a properly sized, fully-cycled tank. If you’re dealing with a sick fish, then there are some precautions you may need to take if you start dosing medications.

How medications affect the labyrinth organ

Though betta fish in the aquarium setting might not need to use their labyrinth organ regularly, they still like to go to the surface of aquarium water to breathe and make a bubble nest if you’re lucky.

Some of the main ingredients to avoid introducing into your betta fish tank are aloe vera, tea tree oil, and other natural oils. These ingredients can be found in popular betta products, including API’s BettaFix and Melafix, as well as various betta water conditioners.

Hobbyists have made reports of betta fish struggling to breathe and eventually dying after dosing these medications in particular. Because of this, many betta keepers avoid medicines with natural oils altogether.

Other fish keepers trust aquarium brands to have the health of the fish at the top of their list, finding that natural oils don’t have any ill effects on labyrinth organs.

Though many aquarists claim to have lost their betta fish to these treatments, others have had considerable success.

Betta fish and gouramis are unique tropical fish as they have a specialized organ called the labyrinth organ. This adaptation allows this type of fish to live in areas with low oxygen levels in the water.

In the aquarium setting, bettas are much more accustomed to ideal conditions, so oxygen levels may need to be increased through an air stone or more frequent water changes.

If you have any questions about labyrinth organs, other labyrinth fish species, or if you have had experience oxygenating a betta tank, don’t hesitate to leave a comment below!