Read on to find out!

Can Your Betta and a Rainbow Shark Live Together?

Putting the two together would eventually lead to inevitable fights. But is there a way for these species to live in harmony? Let’s explore the possibilities.

The Rainbow Shark lives in freshwater environments with slow currents and plants. They live in a water temperature of 75 to 80 degrees Fahrenheit and a PH between 6 and 8.

Rainbow sharks usually need at least 50 gallons of water per shark. These sharks feel cramped without ample space and are likely to become aggressive in a tank size smaller than 50 gallons.

They are omnivores that eat other fish, shrimp, plants, vegetables, and worms.

Bettas are tropical fish that live in calm waters at a water temperature between 76 and 85 degrees Fahrenheit and a PH of 6.8 to 7.5. They also prefer an aquarium environment with plants.

Similar to the Betta, Rainbow Sharks are most commonly found in Thailand. This species of freshwater shark lives in bodies of water like river basins with sandy bottoms.

Rainbow sharks will move into flooded areas in the wet season and back to their normal habitat in the dry season.

In a community tank environment, however, they can be aggressive and territorial, especially if the tank isn’t large enough.

Adult Rainbow sharks are most active in a tank environment at night. Juveniles are a little shyer, however, and spend much time hiding.

Adult Rainbow Sharks show dominance by biting, chasing, and butting the heads and tails of other fish.

Bettas are characterized by being aggressive fish. But are all bettas aggressive? Not necessarily. Every betta has their own personality, just like you or me. Bettas can be aggressive, calm, nervous, or lively.

Aggressive Bettas have a general aggressive tendency towards anything within their habitat. Males are usually more aggressive than females.

A calm betta fish personality is fairly stable and not easily stressed. They enjoy calmly exploring their tank and can generally live with other fish without conflict.

Bettas with nervous personalities get stressed easily, which can cause them to bite their own tails. Nervous bettas shouldn’t be placed with other tankmates.

Bettas with active personalities are full of curiosity and love to explore. They generally don’t stress easily and interact with other tankmates in a friendly way.

How To Determine Your Betta’s Personality

As a betta fish keeper, paying attention to your betta’s actions can help you to determine their personality type. Here are some common Betta actions and what they mean.

If your betta flares at everything around their tank that moves, your betta may be the aggressive type.

However, Bettas sometimes flare at new things or things that startle them, but that doesn’t necessarily mean they have an aggressive personality.

Floating Around the Tank

If your Betta enjoys floating around slowly and resting, it may have a calmer personality. They may also ignore other tankmates and generally are not easily stressed or angered.

A nervous Betta is typically triggered by fear from various factors. Noise, bright lights, etc., can cause them to get nervous and possibly lose their temper or hide.

Pacing around the tank can often be an indicator of fear, nervousness, or aggression. Pacing at the sides of the tank is often an indication your Betta is stressed.

Like a Betta and many other aquarium fish, Rainbow Sharks appreciate plenty of places to hide in their tanks. They prefer a sandy substrate with pebbles and plants.

They will also appreciate caves that look natural to sleep in. Lots of live plants will create a feeling of safety for the rainbow shark.

Also, like your Betta, aggression can occur with your Rainbow Shark if they aren’t comfortable in their environment. 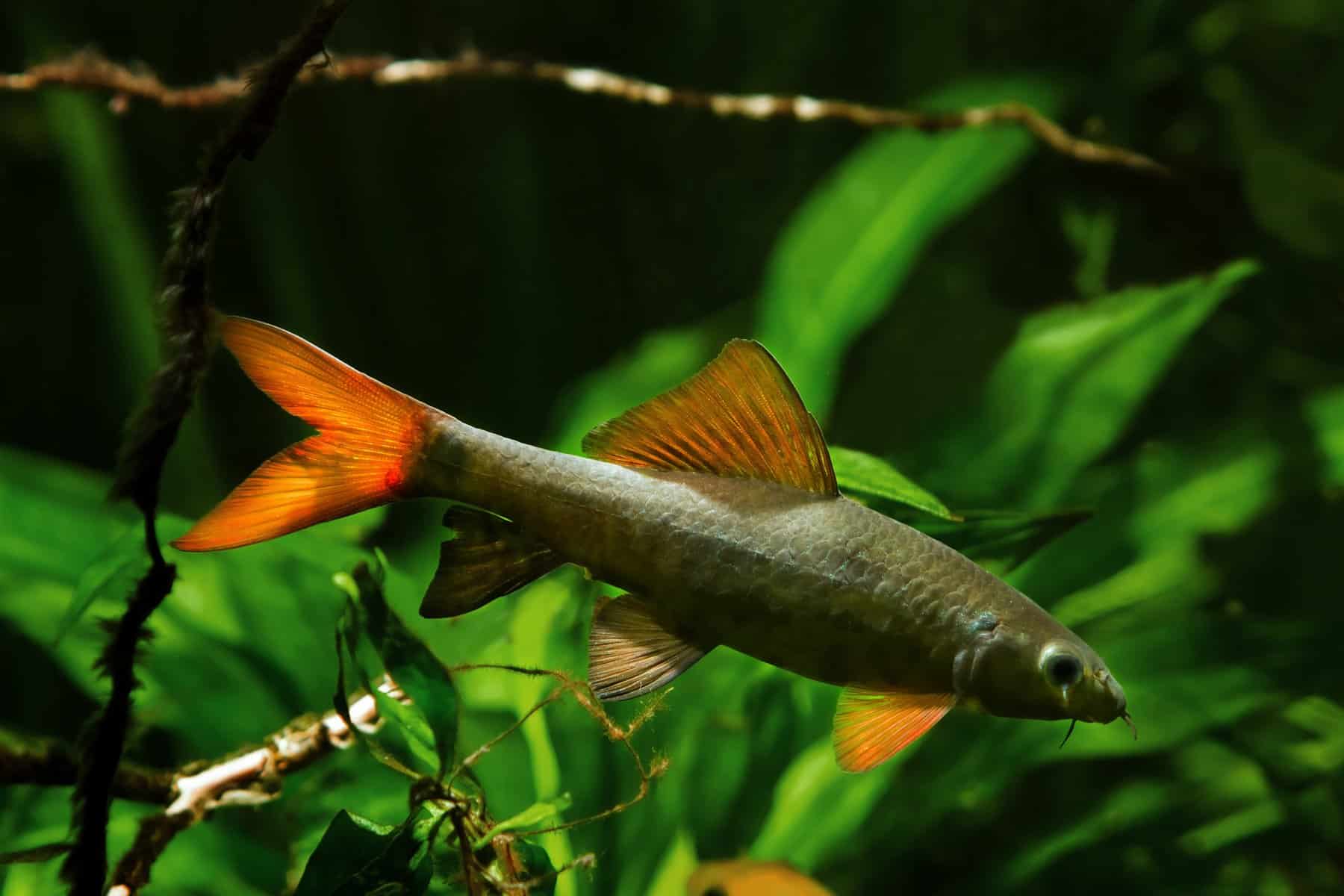 Rainbow sharks are bottom feeders. In the wild, they will surf the bottom of the substrate for any food they can find.

They will do the same thing in an aquarium environment, but because tanks are usually too clean to provide much food for them, you will need to supplement their diet.

How Can the Rainbow Shark and Betta Live Together in Peace?

If you’ve got your heart set on keeping a Rainbow Shark and Betta together, you’re lucky because there are ways to make this happen. Here are some possible ways to pair them together.

Give Lots of Hiding Spaces

If you want to keep this shark and Betta together, a lot of hiding places will be necessary. Rainbow sharks love to chase tank mates and nip at their fins, which can stress your Betta out.

Especially because Rainbow Sharks are bigger than your Betta, this can easily intimidate them. Providing lots of hiding places like plants, gravel, caves, and more will prevent this from happening.

Pair a Juvenile Rainbow Shark With an Adult Betta

Many fish keepers state that introducing a juvenile Rainbow shark to your adult betta is usually successful.

When a juvenile rainbow shark grows up with Bettas will let them get used to each other and prevent extensive aggression as they grow to adult size.

Keeping your Rainbow Shark and Betta in a very large tank is the easiest method to keep these two species together, especially because rainbow sharks can grow fairly large.

Rainbow sharks generally need to live in larger tanks, to begin with. The bigger the tank, the less chance of aggression.

Dividing a tank is a safe way to keep these two species together in the same tank without aggression. This can be done by dividing a large tank in half in the center, Bettas on one side, and sharks on the other.

Male species of almost every fish are more aggressive than females of the species. The same is true for Bettas and Rainbow Sharks.

Keeping only female Bettas and rainbow sharks or fewer Betta male fish than female fish can create peace between the two species.

Have More Bettas Than Rainbow Sharks

Having a large population of Bettas compared to sharks can intimidate the sharks and prevent aggression. However, this only works for females of both species because it isn’t very efficient for males.

We have established that both of these species almost have the same diet, so it’s possible one can bully the other over food. Sharks eat from the bottom of the tank, and Bettas eat around the middle to the surface area of the tank.

Giving sharks sinking pellets or any food that easily sinks and feeding Bettas floating pellets on the other side of the tank can prevent food aggression.

Although Betta fish and rainbow sharks have many similarities like water conditions, diet, temperament, and more, keeping a Betta and Rainbow Shark together isn’t recommended.

If you follow the tips in this article, however, they can help you peacefully keep these two species together.