After the traditional goldfish, betta fish are one of the most popular pet fish worldwide. And your beloved betta is more than just a pretty boy with glowing colors and floating fins!

It’s thought that bettas are actually very intelligent and many have their own distinct personalities. Many owners say that their handsome betta splendens is aware of his surroundings and recognizes his doting keeper. And did you know that you can teach your betta fish quite a few cool tricks?

So, we wondered just how smart is that beautiful fishy swimming serenely in his perfectly aquascaped tank? And do intelligent fish like your betta get bored? We did some research and put together this fascinating article to answer that question.

How smart are betta fish? Read on to find out!

Contrary to popular belief, bettas can make good community fishes if kept with the right combination of tank mates.

However, the betta’s other common name, Siamese Fighting Fish, does give away the fish’s darker side. Centuries ago, in their native Thailand, Cambodia, Laos, and Vietnam, wild bettas were domesticated and bred for fighting. Male betta fish were pitted against other males, often fighting to the death, while onlookers placed bets on the outcome of the fight.

Bettas are highly territorial and will aggressively defend their territory from other male betta fish. That’s why they fight and is also why you can’t keep two male bettas in the same tank.

That said, your betta fish is not all bad, nor is he a thug! Bettas are known to be intelligent fish that need plenty of physical and mental stimulation to keep them happy. A bored betta will get stressed, which can ultimately lead to a weakened immune system that will make him sick.

Just How Smart Are Betta Fish?

There are quite a few reasons why we think that betta fish are pretty smart fish.

That legendary betta smartness is largely to do with the betta’s natural instinctive behavior, some of which you can use to train your pet to perform a few simple tricks. First of all, let’s find out why bettas are naturally so intelligent.

Like gouramis, bettas are members of the Anabantoidei family of fishes. Fishes in this family are able to breathe atmospheric air thanks to an anatomical feature called the labyrinth organ.

The labyrinth organ enables the fish to breathe air and extract oxygen from it. That ability enables the fish to survive in water that has very poor oxygen levels, for example, during the dry season when water levels fall. So, when other species of fish that are reliant on the oxygen in the water suffocate and die off, the betta can survive by breathing air.

Bettas actually need to breathe into their labyrinth organ to survive, as they are unable to extract all the oxygen they need, even from well-oxygenated water. For that reason, you must ensure that your betta tank has plenty of open surface area so that your fish can take gulps of air when it needs to.

Some fish species are egg scatterers, and some are livebearers. Egg scatterers leave their eggs exposed on leaves or simply on the substrate where the fry hatches, usually after a few days. Unfortunately, that means many of the eggs are eaten by other fish and predators long before hatching can happen. Also, eggs that are laid out in the open are prone to developing fungus, which means that the eggs don’t hatch at all.

Livebearing fish, such as guppies, give birth to live young. In a community tank, many of the babies are eaten before they have a chance to grow into adults. Also, the parent fish are not averse to cannibalism!

Bettas are different. Male betta fish build bubble nests. The nests are usually constructed in a corner of the tank or underneath a broad leaf at the water surface. The fish blows bubbles that stick together to create a large nest. Following a lengthy courtship ritual, the female betta lays her eggs underneath the nest where the male fertilizes them. The male fish then gathers the eggs in his mouth and transfers each one to the nest.

When the eggs hatch, the fry remains attached to the egg sac for a few days until the nutrients it contains are exhausted. The fry then becomes free-swimming.

Once the eggs are laid and have been transferred to the bubble nest, the male betta guards them against other fish and predators that might want to eat the eggs or newly hatched fry.

The male will even protect his offspring from the unwanted attentions of the female betta, just in case she tries to eat them.

Through that behavior, we can conclude that male bettas are smart enough to realize that by defending their progeny, they can ensure that their genetic line is maintained and carried on.

Do Betta Fish Recognize Their Owners?

Many fish, including goldfish, for example, will react when someone comes close to the tank. Usually, that’s simply because the fish have become accustomed to being fed when they see a person approaching, especially at specific times of the day.

However, bettas can recognize their owners, especially if you interact with your pet on a daily basis. Some owners report that their bettas even learn to react to the sound of their voice.

Betta fish are clever enough to learn to perform a few simple tricks! How cool is that?!

Not only does that show how smart bettas are, but it also shows that these fish enjoy and need physical and mental stimulation to keep them happy and stress-free. As well as providing your betta with a well-decorated tank that contains plenty of hiding places, caves, and planting for him to explore, it’s important that you set aside some time to play with him every day, too.

The first thing you need to do is to get your betta to follow your finger. Some bettas will do that from day one. However, you may need to do more work with your fishy friend if he’s not especially curious about you.

Try trailing a live bloodworm or some other tasty treat in your fingers just below the waterline. Your betta should follow the treat. When he does, give your fish his reward.

Basically, you need to repeat that until your betta learns to associate the movement of your finger with a food reward.

The first really interactive trick that you can teach your betta is to take food from your hand.

You should feed your fish at set times each day so that he gets into a routine and learns when to expect food. When it’s time for your fish to eat, take a betta pellet or a little of his favorite flake food between your fingers and hold it just under the water surface. It won’t take long for your betta to come and take the food from you.

Don’t worry about your fishy friend’s tiny teeth. Bettas use their teeth to hold onto food that might otherwise fly or swim away, not to bite their owners!

So, you can teach your betta to take food right out of your fingers, but that’s only the start! What other tricks can you teach your super-smart fishy friend?

How To Train A Betta Fish To Jump

With patience and persistence, you can train your betta fish to jump right out of the water. Here’s how to do it!

Jumping To Take Food From Your Finger

In the wild environment, bettas can and do jump. Sometimes, the fish jump simply to move from one puddle to a deeper one where there’s more food and oxygen available, typically during the dry season. However, bettas also sometimes jump to snatch prey from above the water.

So, wet the tip of your finger and stick a mini betta pellet or some flake food onto it. Hold your finger slightly above the waterline where your fish can see it. Once the penny drops and your fish understands what you expect him to do, he’ll jump out of the water to try to grab the food.

Jumping Through A Hoop

Once your betta understands the principle of jumping to get food from your finger, you can teach him to jump through a plastic hoop.

You can buy betta training kits online that come with a hoop included, together with lots of other really neat tricks that you can teach your pet. 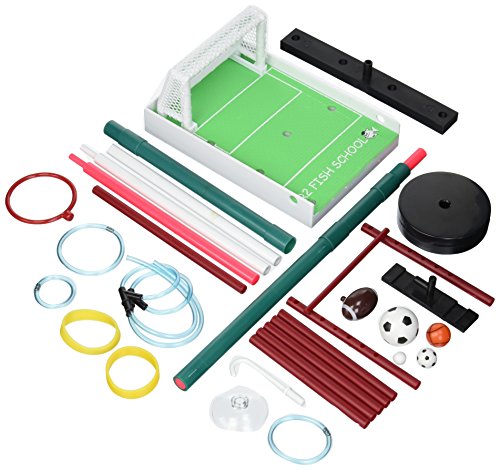 Remember that your betta will get tired or even lose interest once he’s eaten a few treats, so keep the training sessions short and sweet. 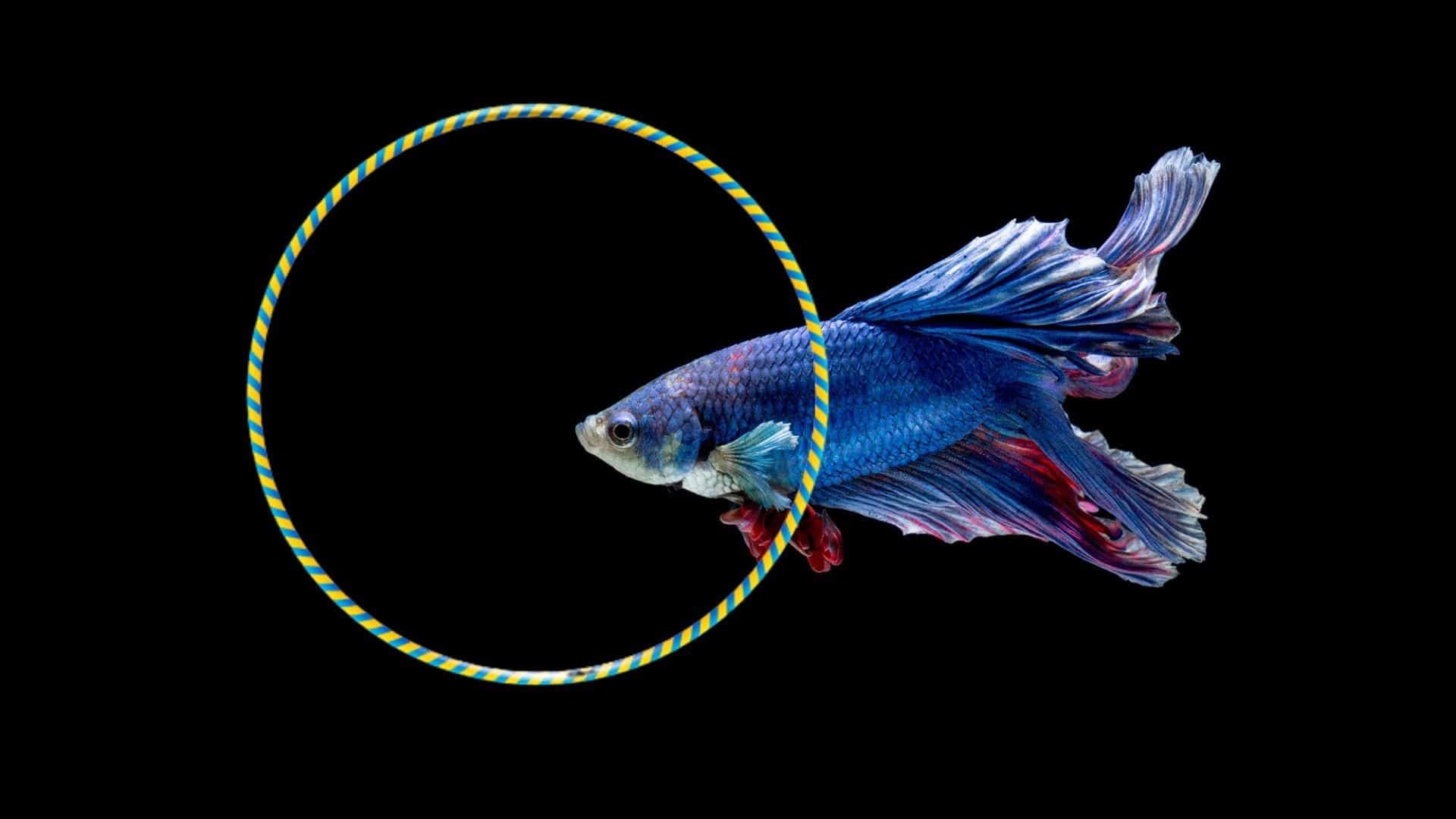 Bettas are naturally territorial and inquisitive, and you can use that to teach your fish some simple tricks, such as playing soccer!

Use a ping pong ball or another small plastic ball and put it on the water surface. Since bettas are surface feeders, your fish will investigate the strange object initially to see if it’s edible. If you use a brightly colored ball, your territorial fish might even push and shove the ball to remove it from his patch!

Now, try pushing the ball away from your fish to see if he follows it. Next, push the ball back to your betta until a game of soccer breaks out between you and your pet!

Bettas are generally quick learners, but there are a few important golden rules to follow when you embark on a training program for your fish:

Are Betta Fish Smarter Than Goldfish?

So, goldfish are pretty much the most popular species of pet fish, followed by bettas. But are betta fish smarter than goldfish?

Well, goldfish don’t have a labyrinth organ, which means that they can’t breathe atmospheric air as bettas can. So, if a goldfish is kept in a tank without sufficient oxygen, eventually it would suffocate, whereas a betta would know that he could breathe at the water surface and would most likely survive.

Goldfish are egg-layers. Once the eggs are laid, the goldfish parents leave their offspring to fend for themselves. In fact, if you don’t remove the adults from the tank, they will eat the eggs and probably the fry too.

That’s not too bright, as it means that the eggs and fry that the fish have taken the trouble to produce are wasted!

The betta’s bubble nest strategy, together with guarding their young, is a much cleverer way to produce the next generation.

Can Goldfish Recognize Their Owners?

That’s a tricky question to answer. Some owners swear that their pet goldfish do recognize them. That said, goldfish are notoriously greedy fish, and it’s probably most likely that the fish are merely responding to movement near the tank that could indicate feeding time is imminent.

However, the jury is out on that one!

Can Goldfish Learn To Perform Tricks?

It’s debatable whether or not goldfish can be taught tricks.

Goldfish are heavily food-motivated, and they can be quite curious. So, it’s quite possible that you can teach your goldfish to follow your finger back and forth across the glass if you reward him with a morsel of food or a treat.

However, goldfish generally don’t jump through hoops, even for food! That said, there are always exceptions to the rule. So, be sure to tell us in the comments box below if you’ve successfully trained your goldfish to perform any tricks!

Betta fish are so much more than just beautiful to look at!

These are very intelligent fish that can breathe air, guard their young to ensure the survival of their lineage, recognize their owners, and can even learn to perform simple tricks.

Did you teach your betta buddy any cool tricks? If you did, we’d love to hear about them!