Every betta fish has his own unique personality, just like you and your friends do! However, most bettas do react in similar ways in the same situations. For example, if your betta feels threatened by something he doesn’t understand, he will most likely hide. But is that the only time when your betta fish might hide, and should you be concerned about your pet if he hides all the time or if he suddenly begins hiding?

In this article, we discuss the reasons why betta fish hide, and we find out why you should provide your pet with lots of hiding places in his tank.

When you first get your pet home, you should expect him to be a little nervous and skittish. After all, everything is new, and it’ll take a week or two for your betta to find his way around his new environment, establish a territory, and feel comfortable there. During that time, it’s quite normal for your betta to hide. He will want to explore caves and other spots that make good hiding places.

That’s normal behavior for a new betta, and you shouldn’t be concerned about him. However, there are a few steps that you can take to help your new fish settle in.

Don’t just tip your new fish into his tank right out of the container he came in! That’s a sure way to stress and frighten your pet. Instead, take at least 20 to 30 minutes to acclimate your fish to his new home.

As your betta waits to be released in his cup or container, use a piece of airline tubing to drip water from an established, fully cycled tank into your betta’s temporary residence at a rate of around three drops per second. That will help your betta to adjust to the new water conditions in his tank, reducing the risk of shock and making the whole experience a whole lot less stressful. Each time the volume of water doubles, remove a third of the water from your betta’s container. Once you’ve done that a couple of times, you can safely net your fish and release him.

Now, you can put your new pet into his tank. Don’t be surprised or concerned if your betta immediately checks out a few suitable hideaways where he can take refuge and feel safe until he gets his bearings.

Any changes that you make to your betta’s tank can cause him to hide. That includes adding new tankmates, moving items of tank décor around, and even introducing new toys for your betta to play with.

Did you know that your betta fish can feel vibrations through the water in his tank? Well, that’s so thanks to the fish’s lateral line, and it means that if you have your sound system cranked up to ten right next to your betta’s aquarium, your fishy friend may be frightened and may hide to escape.

Does Your Betta Need Hiding Places?

So, now that you know that hiding is a natural betta fish behavior, you can understand why it’s crucial that you provide your pet with hiding places in his tank where he can feel safe.

Keeping your pet in a bare tank that’s completely devoid of any form of decoration is tantamount to cruelty. Bettas are intelligent fish that need mental and physical stimulation to prevent them from becoming bored and stressed. They are also highly territorial fish, spending many hours each day cruising around their tank. Part of that territorial behavior entails exploring any caves, overhangs, and other likely hiding places.

Wild bettas are also prey creatures that may be vulnerable to attack by larger fish. So, when a betta chooses a territory, he needs to make sure that there are plenty of places where he can go into hiding when he needs to. Although a pet betta will never be attacked or threatened in his tank, he doesn’t know that, so it’s important to provide him with reassurance by including lots of decorations that he can hide behind, as well as caves and thick planting.

Betta hiding behind the filter unit!

If you see your betta hiding away behind the filter intake or under the outtake even though he has plenty of other hiding places at his disposal, it could be that there’s a problem with the water quality in the tank. Fresher water comes out of the filter unit, and that’s probably why your fish is hanging around there. 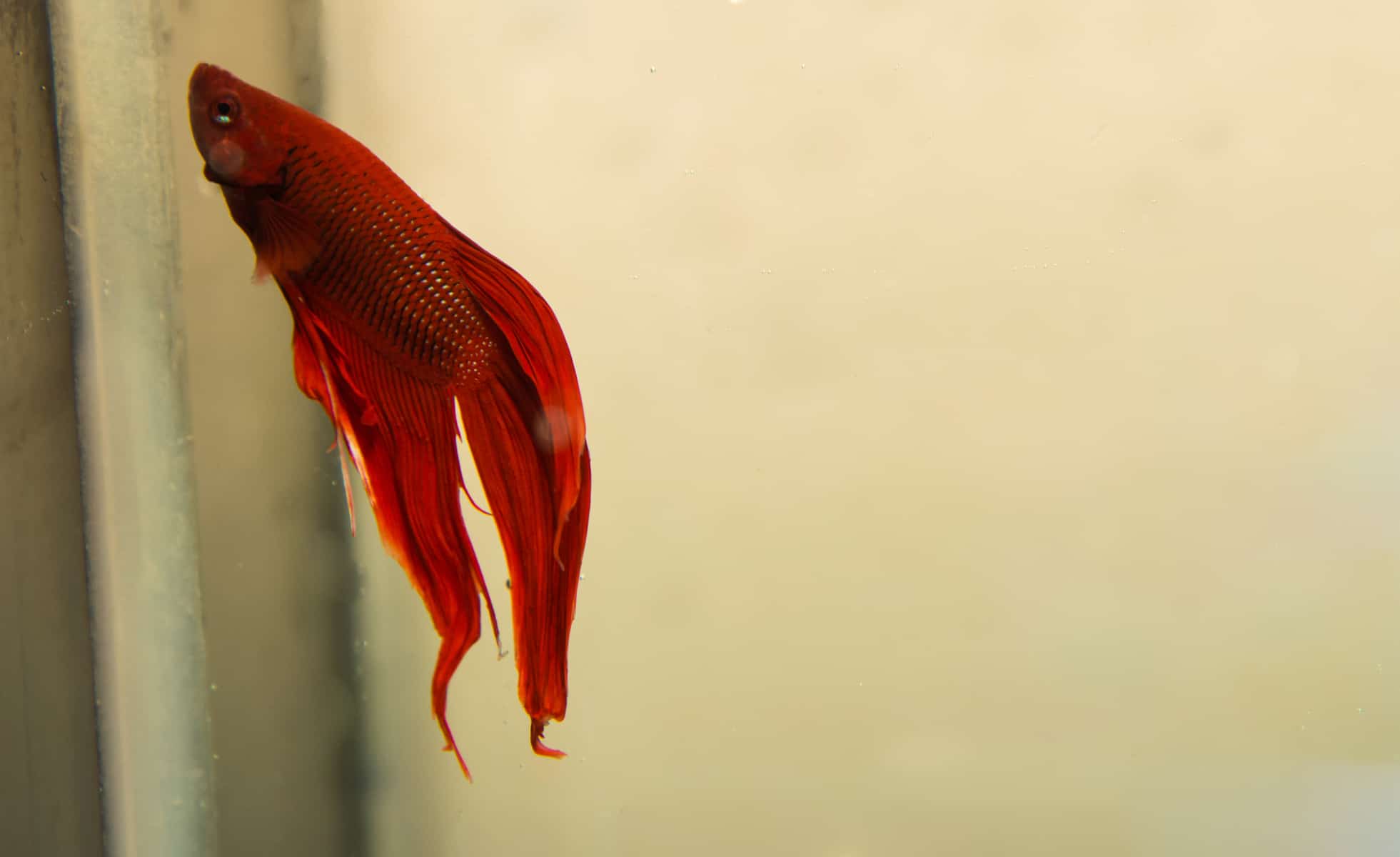 First of all, check the water parameters in the tank by using an aquarium water test kit. Your betta breathes by absorbing dissolved oxygen from the water in his tank or by using his labyrinth organ to gulp air at the water surface. If the levels of ammonia or nitrite in the water are very high, your betta’s gills will suffer chemical burns, and he will find it increasingly difficult to breathe.

If nitrate levels in the water are high, nitrite in the fish’s blood binds to the hemoglobin contained in the blood cells, interfering with its ability to carry oxygen. That can result in your fish suffocating or find it extremely difficult to breathe. So, the fish move to areas of the tank where breathing is easier. So, if you ever see your betta hanging around by the filter, he’s most likely not hiding, but simply trying to breathe!

You can quickly and effectively treat the problem by carrying out several small partial water changes to remove excess ammonia and nitrites from the water. Don’t go for one massive water change, though, as that could shock your betta and could even kill him. Change 20 percent of the water, and then repeat the exercise a couple of hours later. In very severe cases, you may need to change more water the following day.

After each water change, make sure that you check the water parameters in the tank. Clean the filter unit, replace any filter cartridges that appear to be damaged or worn out, and check that the pump is working properly.

Betta hiding and not eating

Begin by testing the tank water to make sure that ammonia and nitrite poisoning are not to blame. If the water parameters are fine, i.e., ammonia and nitrite levels at zero and nitrates below 20ppm (parts per million), then your fish could be sick. If you’ve had your betta for a while, the most likely cause of the problem is a bacterial infection of some kind, which you can treat by adding an over-the-counter medication to the tank water.

However, if your pet is new, there could be any number of health issues. If he’s a cup betta, he could have contracted permanent health issues caused by ammonia or nitrite poisoning. Also, parasites, fungal or bacterial infections could also be the culprits for your betta fish hiding. A sickly, weak betta will feel vulnerable, so it’s to be accepted that he will try to hide.

Sometimes, issues with the tank setup can cause a betta fish to go into hiding.

Betta fish are not strong swimmers, especially if you have one of the long-finned varieties. So, if the flow from the filter pump generates a very strong current or lots of water movement, your betta fish may seek sanctuary from being buffeted around by hiding behind some of the tank decorations or holing up inside a cave.

If you can’t adjust the flow rate on the filter, try adding a redirector fitting so that you can angle the flow and prevent the disruption it is causing. Alternatively, use rocks, driftwood, or thick planting to buffer the flow. Another useful trick is to cover the end of the outlet with a small piece of sponge. That should be sufficient to curb the power of the flow without compromising on the filtration function of the system.

In the wild, bettas inhabit marshes, paddy fields, and bodies of slow-moving water that are densely vegetated and most likely muddy too. If the lighting in the betta tank is too bright, your pet may find your betta fish hiding.

Try turning out the lights and watch to see if your fish emerges from his hiding place. If he does, then it could be that you need to change the lighting unit in your tank for a more subdued one. Alternatively, use floating plants to diffuse the light, but be careful that you don’t clog the water surface, or your fish won’t get to breathe using his labyrinth organ when he wants to. 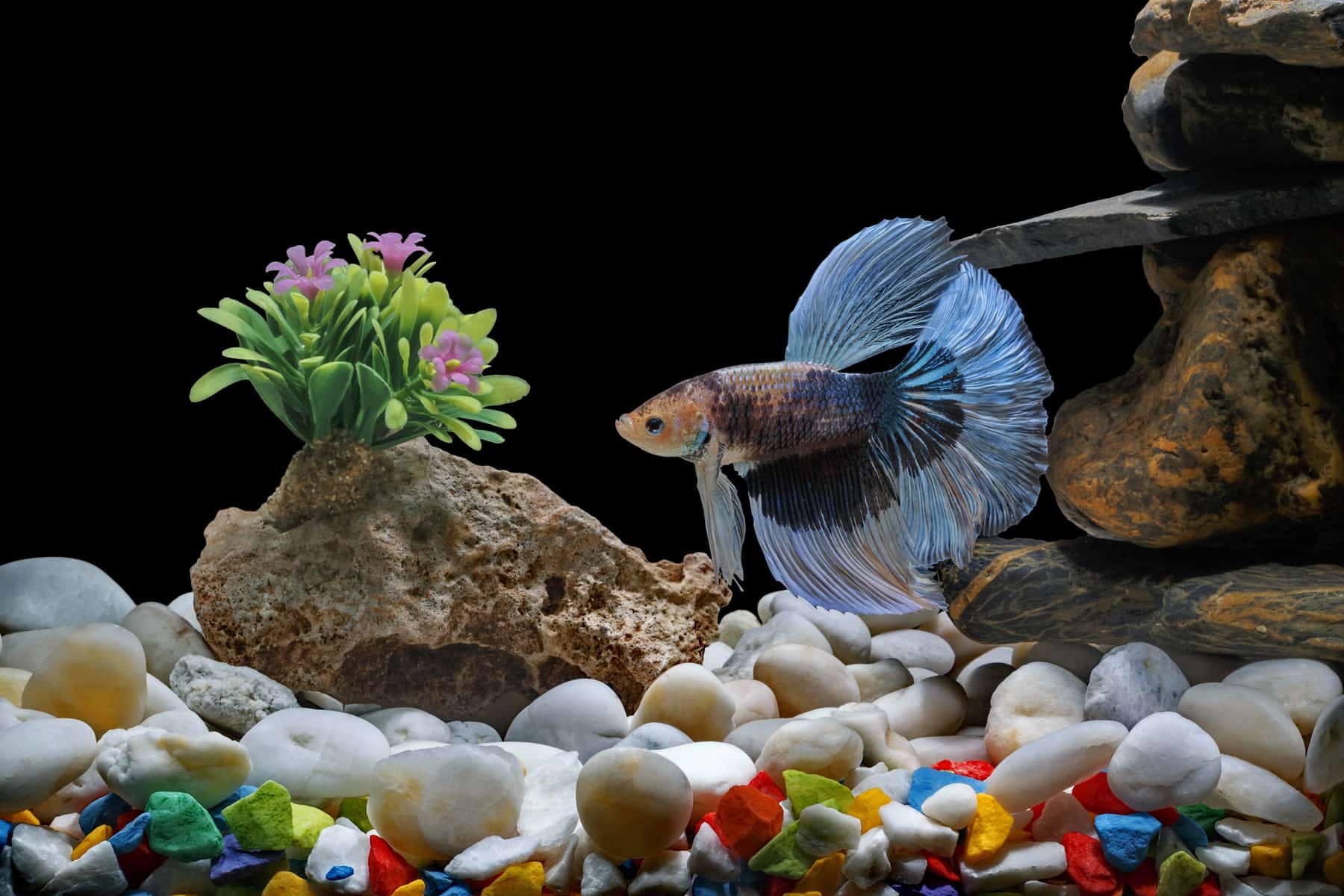 As previously mentioned, bettas are intelligent fish that need lots of stimulation to keep them happy. A bored betta may resort to hiding, simply because he is depressed.

Try adding plenty of new toys, plants, and decorations to the tank, and perhaps consider adding a couple of peaceful tankmates to keep your betta company. Although bettas do have a reputation for being aggressive characters, they can get along well with certain fish species and are usually all the better for having company.

Hiding is perfectly normal behavior for a betta fish. There are lots of reasons why a betta hides. He could be wary and nervous of a new home, simply curious and exploring his territory, he may just enjoy hiding! However, if your betta is hiding around the filter unit, stops eating, or appears unusually lethargic or depressed, that’s a red flag that a health problem could be to blame.

Poor water quality is a major cause of sickness and depression in betta fish. Bettas are highly sensitive to water conditions and fluctuations in temperature, so you must test your tank water to see if there’s a problem and take the necessary action to fix it.

With all that being said, each betta fish has his own personality, and some bettas do simply enjoy hiding!