Bloodworms are one of the most commonly available foods for aquarium fish and are a favorite among betta fish; these worms can be found live, frozen, or even freeze-dried.

Some betta fish like them so much that hobbyists even have their own bloodworm farms to keep up with the demand. But is it the best aquarium snack out there?

While bloodworms are a tasty snack, they aren’t the best for your betta. They can be too rich and fatty to feed your betta fish regularly. Therefore, it’s best only to give a couple of bloodworms to your betta once or twice every week!

Read on to find out everything you need to know about bloodworms, how they’re packaged, and the amount to feed your betta fish.

In the scientific world, there are two different types of bloodworms, those that come from the Chironomidae family and those in the Glycera genus.

Bloodworms from the Glycera genus are true marine polychaete worms that can deliver a venomous bite. Luckily, you won’t experience these types of bloodworms in your betta tank or in the aquarium hobby!

Aquarium bloodworms are from the Chironomidae family and aren’t actually worms at all. These small ‘worms’ are actually midge fly larvae that have bright red bodies as the result of hemoglobin being visible through their exoskeleton.

These insects can stay in their larval state for up to three years, and only last as a mature midge fly for a couple of weeks. In their adult form, these bugs closely resemble mosquitoes.

Are Bloodworms Good to Feed Your Betta Fish?

Bloodworms are good to feed your betta fish on occasion. They tend to be high in protein and fat but lack the important nutritional value that bettas need.

Due to this fact, bloodworms are best given as a treat instead of the main component of a betta fish diet.

In general, bloodworms should always be considered a snack for both freshwater and saltwater fish. Bloodworms simply don’t have all the nutritional value needed to keep your betta fish strong and colorful.

Your main betta fish food should be high-quality fish flakes or pellets that are high in protein. Betta fish need to eat between 1-3 times a day. Live, frozen, or freeze-dried bloodworms may be given 2-3 times a week during feeding.

Along with not fulfilling a good and healthy diet, bloodworms can get to be expensive. Bloodworms need to mature into full midge flies before reproducing, so it’s difficult to set up a breeding container, though betta hobbyists have had success doing so.

Live bloodworms have an especially short shelf life; however, frozen and freeze-dried bloodworms can feed your betta fish for a longer period of time.

When they are still larvae, they typically curl into loops. When they become pupae, they become more of a hook shape.

Due to this trick transition, it’s difficult to grow your own bloodworms, because if you grow too many at once, you’ll just end up with lots of midge flies. 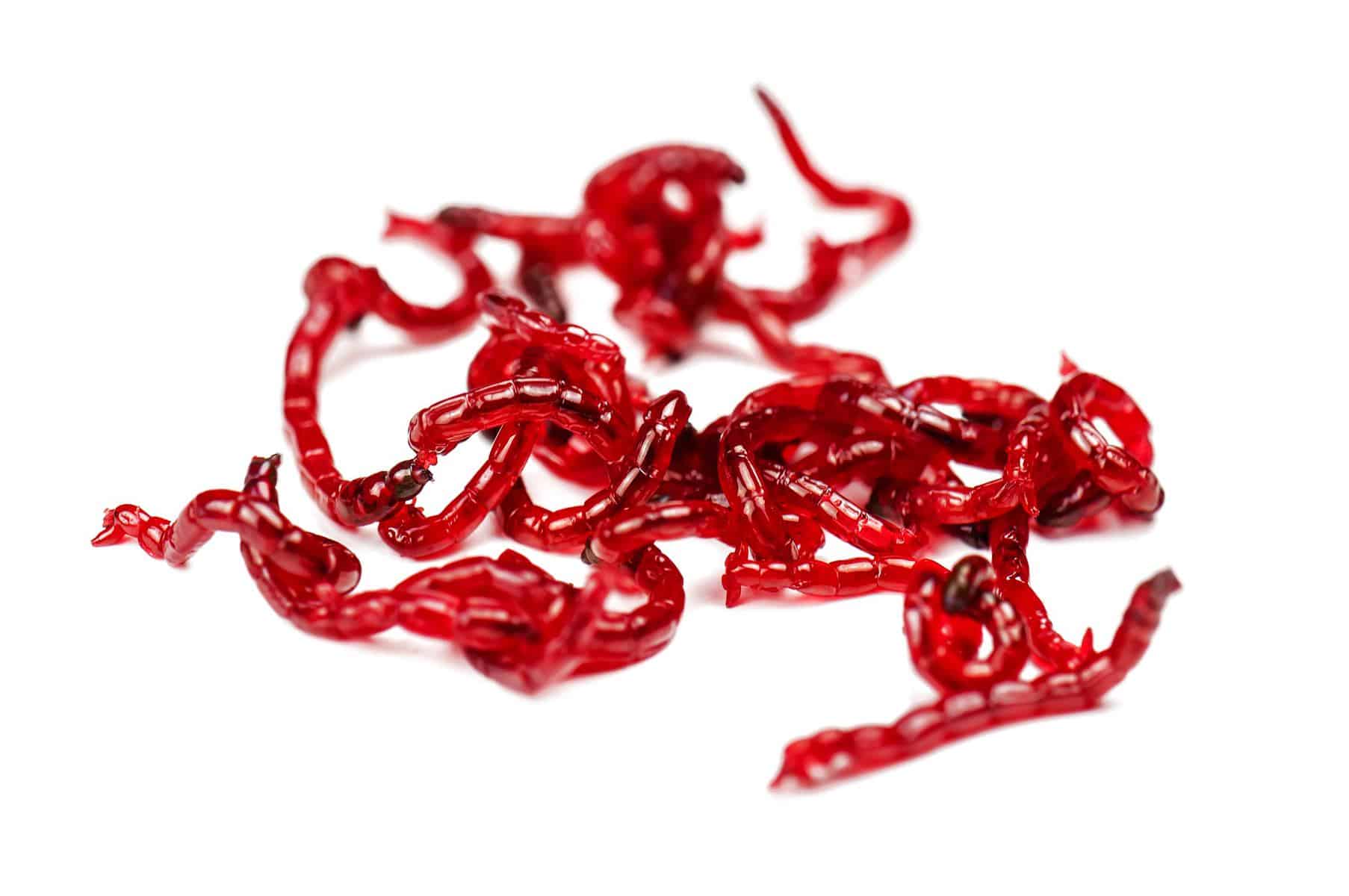 Live bloodworms are the best option to feed your betta fish in terms of nutritional value. However, live bloodworms tend to be the most expensive option per serving and are highly perishable if not kept in the right conditions.

Live bloodworms are also a good option if you have a recovering, lazy, or overweight betta fish. Seeing live prey should make your betta fish interested as a natural carnivorous predator.

This can serve as a source of enrichment and activity. If your betta fish isn’t currently hungry, then the leftover bloodworms can live in the aquarium substrate for a couple of days.

When feeding live bloodworms, it’s best to feed them one by one. Your betta fish has a small stomach and only a couple of bloodworms should be offered in one sitting.

This will also prevent too much from being wasted and give your betta fish time to hunt between bloodworm offerings.

Frozen bloodworms usually come in preformed ice cubes that are easier to cut up and manage portions so you can feed according to the stock in your fish tank.

Frozen bloodworms need to be thawed before they are put into the aquarium. This can easily be done by taking some fish tank water and dethawing the cube.

Some hobbyists like to turn the filters in their tank off before pouring the bloodworms in to keep them from getting sucked up into the filter. However, if you have particularly hungry betta tank mates, it shouldn’t be too much of a problem.

Break open the frozen cube and let the juice drain away to prevent contaminating the tank water. Feed your betta small pieces, one at a time.

When buying frozen bloodworms, buy high-quality stock. This will ensure that you are getting more worms than water and that they are full of protein to keep your betta full and happy.

Freeze-dried bloodworms shouldn’t be offered as much as live or frozen bloodworms, but they’re still a good treat to feed your betta every now and then.

The problem with freeze-dried bloodworms is that most of the nutritional value has been removed from them in the freeze-drying process. It’s also possible that the mixture is made up of other unknown fish and animals as well.

It is best to take some fish tank water and let the freeze-dried bloodworms soak for a couple of minutes before offering them to your betta.

Like frozen bloodworms, you should always try to buy high-quality freeze-dried bloodworms for betta fish in order to get the best protein possible.

Can I Feed My Fish Bloodworms Exclusively?

No, it’s not okay to only feed your betta fish bloodworms, even if you’re switching between live, frozen, and freeze-dried worms. Betta fish need a balanced diet with lots of high-quality foods to keep them active and colorful.

If you feed your betta too much junk food, it’s possible for them to become lazy, overweight, or develop digestion problems. 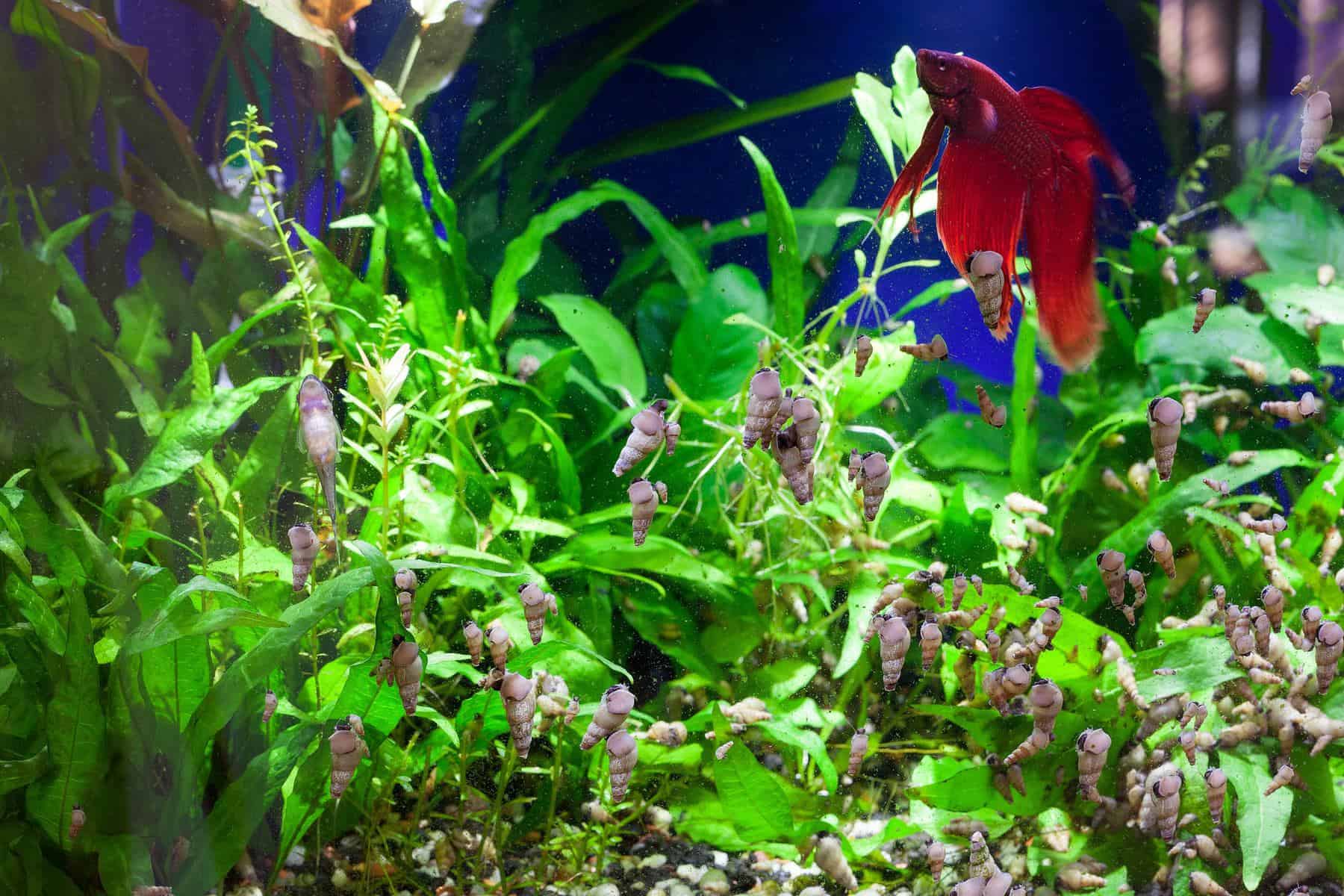 What If You Feed Your Betta Too Many Bloodworms?

But what would happen if you offered your betta fish too many bloodworms?

Eventually, too much of a good thing can become a bad thing. Not only does an excess of bloodworms affect the health of your betta fish and other tank mates, but it will also start to affect the overall health of the aquarium.

By overfeeding bloodworms, your betta may experience digestion issues while the water in your tank may experience excess nutrient inputs and parasitic infection.

Bettas seem to experience digestion issues more easily than other kinds of tropical fish. This means that it’s especially important to make sure that your betta is eating and expelling waste regularly and that there are no signs of bloating or other abdominal bulges.

As mentioned before, freeze-dried bloodworms have to be soaked in fish tank water before your betta can eat so that they don’t expand in the gut and lead to blockage.

To lessen the chances of this happening, don’t feed your betta too many bloodworms at once.

Every time you feed your betta, you are introducing a direct source of nutrients. Some bloodworms get eaten while the rest get stuck in the substrate or in the filter and begin to rot.

While bacteria and other microorganisms in the aquarium need the nutrients that come from this rot, too much at once can lead to problems with the water parameters in your betta tank.

Rotting food can quickly lead to ammonia spikes, which can start to affect your betta fish. Other nitrates and phosphates released from the uneaten food can also lead to unsightly algae throughout the fish tank, which can be a headache to later remove.

If you’re lucky and don’t experience an ammonia spike or algae problem, uneaten food will still likely lead to cloudy fish tank water that can usually be cleared up with a couple of water changes.

However, your betta tank will still continue to have problems if you feed your betta fish too much at once.

Unfortunately, live bloodworms are known to carry parasites, which is why many aquarists resort to breeding their own bloodworms in separate fish tanks. This way they can monitor the health of the population of their betta fish.

While the chance of parasites can’t totally be avoided if buying bloodworms, you may have better luck going to an aquarium-specific store.

When going to buy bloodworms at the store, it may be appropriate to ask if they’re using the same worms to feed the fish that they are selling. This should give a good indication that those bloodworms are also safe for your aquarium!

If the thought of introducing parasites into your aquarium makes you nervous, then it’s best to stick with only frozen or freeze-dried bloodworms for your betta.

Why Won’t My Fish Eat Bloodworms?

If your betta fish isn’t eating bloodworms but is eating other healthy foods, then there’s probably little cause for concern. Betta fish are notoriously picky eaters, so perhaps yours just doesn’t like the taste of bloodworms.

There’s no downside to your betta fish not liking bloodworms; you might just have to try a different treat!

However, if your fish is refusing all types of worms and other betta food, then there may be a problem. Loss of appetite could be a symptom of almost every aquatic disease, infection, or parasite.

If you start to notice that your betta fish is acting funny, test the water parameters immediately and make sure that the aquarium system is functioning as it should. Check your betta for signs of injury or stress and proceed with treatment.

If you have a recovering betta fish, it may be best to buy some extra bloodworms for them. Not only do they taste good, but live bloodworms may also help your betta feel more active and motivated to get back to their regular self.

If you think that something else could be causing your betta fish to spit out its food during feeding time, make sure to check out our guide here.

Most betta fish love bloodworms and can’t get enough of them! They can even be used to encourage particularly picky or recovering betta fish to eat more regularly.

However, they’re not the best source of nutrition and won’t sustain a healthy betta diet. Bloodworms should only be fed a couple of times a week, with other high-quality betta flakes and pellets being the main types of food offered.

Too many bloodworms can lead to your betta having digestion issues and excess nutrients and parasites in your tank water. On occasion, bloodworms make an excellent choice of snack for betta fish and other tank mates!

If you have any questions about live, frozen, or freeze-dried bloodworms, or have had success supplementing bloodworms into your betta fish’s diet, don’t hesitate to leave a comment below!