Picture the scene. You just got your new betta fish home and carefully acclimated him before introducing him to his lovely new aquarium. Two days later, your poor pet has vanished into a cloudy fog! But you cycled the tank before you put your betta in there, so, how on earth can you have cloudy aquarium water?

It’s not just tropical fish tank water that sometimes becomes cloudy; cold water setups can be affected too. Unfortunately, there’s no single reason why a fish tank is cloudy. However, you can usually work out what’s happening to cause a cloudy fish tank by carrying out some simple detective work. In this guide, we walk you through all the likely causes for a cloudy betta tank, and we explain how to cure the problem.

What color is the cloudy water?

The first thing to look at is the color of the water. There are different shades of cloudy, and that can tell you what the problem is.

There are several causes of white or gray water in cloudy fish tanks.

Cloudy aquarium water that is white or grayish in color and happens right away when you fill a new tank is usually due to dirt and dust from the new substrate. All you need to do here is drain the tank and wash the gravel through in running water until the water runs clear.

If you wash the gravel, but the water is still cloudy, the problem is probably caused by high levels of silicates, heavy metals, or phosphates. Test your aquarium water, and you’ll find that the pH level is high because the water is alkaline. Treating the tap water with a suitable water conditioner or pH buffer should solve the problem.

If your tap water is the problem, you might want to try using RO (Reverse Osmosis) water instead, which you can buy from your local fish store. Alternatively, you could buy a unit that creates RO water, which could save you money in the long run.

If the aquarium water becomes cloudy a few days or weeks following set up, that’s usually caused by a phenomenon known in the hobby as bacterial blossom.

Bacterial bloom happens in a new aquarium as the biological filter is becoming mature enough to cope with the influx of fish waste, uneaten food, etc. During that break-in cycle, you may find that your fish tank water becomes a little hazy. However, the problem usually resolves by itself over a few weeks or months. In the meantime, you should keep the tank clean by getting rid of any dirt and debris and thoroughly vacuuming the substrate every week.

Also, reduce feeding your betta to every second or even third day to reduce waste food decay. If the water is still cloudy, it may be helpful to use a flocculate. Flocculates work by causing floating particles of debris to stick together, making it easier for your mechanical filter to sieve them out of the water. Look for “water clarifiers” in your fish store, which is the usual trade name given to flocculates.

Bacterial bloom can also happen if you carry out a massive water change, kicking off a mini-cycle during which the bacterial colonies in your filter media and on surfaces within the tank have to repopulate. That’s why it’s important to carry out small partial water changes regularly, rather than doing one huge one that disrupts the delicate eco-balance within the tank.

Bacterial bloom also occurs if you turn off your filter overnight. Strictly speaking, your filtration system should run 24/7/365, and you should only turn it off during routine cleaning and tank maintenance.

If you feed your fish too much, that can make your fish tank cloudy, possibly due to a bacterial bloom or residual fish food particles that have dissolved in the water.

The solution is simple. Don’t overfeed your fish! It’s generally better to feed your fish several times a day if possible so that you’re not dumping a large amount of food into the tank that may not be eaten. Feed your betta only as much as he can eat in a couple of minutes. Watch your pet to see how much food he doesn’t eat and how much is falling down onto the substrate.

Also, remember to leave one day per week when you don’t feed your betta buddy at all. That fasting day allows your fish’s system to process his food most effectively, preventing bloating, constipation, and other digestive problems. 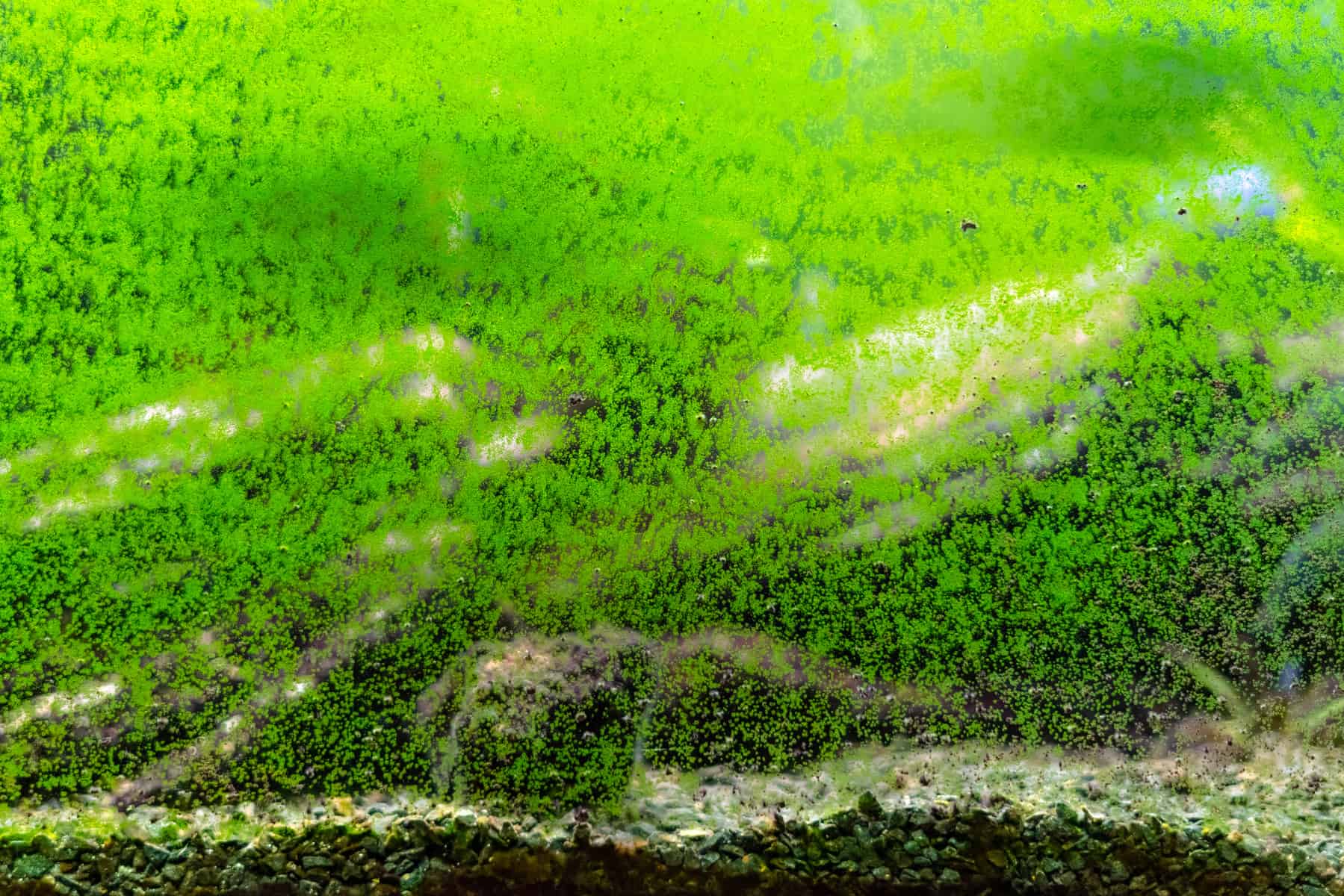 If you keep your betta on his own, then clearly, the problems associated with overstocking don’t apply. However, bettas can get bored, and one good way to keep your pet busy and stimulated is to provide him with a few peaceful tankmates. Now, providing a few friends is a great idea for your betta, but it’s very easy to overstock a nano tank, and that can lead to cloudy aquarium water.

Your betta’s tank is a small, enclosed ecosystem. That ecosystem contains microorganisms and bacteria that help to process fish waste, rotting food, and plant debris, and your filtration system works to clean and oxygenate the water. Any ecosystem can only sustain a certain amount of life, and that applies to fish tanks.

Think of a small, natural pond. Here, there’s a continual supply of fresh water from the rain or from springs, and if the pond is fed by a stream, that takes away general detritus, ammonia, and nitrites, keeping the environment safe for the fish. The pond is kept clean and safe for wildlife by nature, but with a fish tank, it’s up to you to do the maintenance work.

Crowding the tank with too many fish overloads the filtration system and the colonies of bacteria that process fish waste is unable to cope. That leads to a bloom of bacteria in the water, and thus, you end up with a cloudy aquarium.

The solution is easy. Immediately, carry out a partial water change, clean out any waste, uneaten fish food, and debris from the substrate with an aquarium vacuum cleaner, and then either rehome some of your fish or invest in a bigger tank for your betta and his friends.

It’s pretty unusual for aquarium water to turn cloudy and yellowish, but that can happen under specific circumstances.

Although natural driftwood and bogwood look beautifully natural in an aquarium and your betta will enjoy resting on it, wood can lower the pH of the water slightly, and sometimes the water may turn a slightly yellowish color, like cold tea. That’s because wood leaches tannins into the water. Your fish won’t suffer because of that, and some species that originate from tropical forest habitats where the water is full of fallen branches and the like are quite happy to live in “black water.” However, yellowish cloudy water can certainly spoil your view of your betta and makes the tank look dirty, even though it really isn’t.

Luckily, there’s a relatively easy fix. Before you put any wood into your tank, soak it for a few days in clean water so that the tannins leach out before you put the wood into your tank. However, if you buy your decorations from a good fish store, the wood should be prepared so that you don’t experience that problem. Also, if you have a carbon filter that can remove some of the water discolorations, as will regular partial water changes. Luckily, driftwood does stop leaching tannins after a short period, so the problem will gradually resolve itself.

If the aquarium water turns green, that’s pretty much always down to the presence of algae growth in the water. Algae are tiny aquatic organisms that can grow on the surfaces within the tank, on your plants, and on the substrate. But some species of algae grow free-floating in the tank water causing cloudy aquarium water.

However, although diagnosing the problem is pretty straightforward, getting rid of it can be a challenge. Basically, to tackle algal bloom, you need to know what’s causing the problem. The main causes of algae blooming in your fish tank and making the water cloudy are numerous and include:

If you put your fish tank where it’s exposed to direct sunlight for part of the day, there’s a good chance that algae will grow in the water. To restrict algal growth, either relocate or screen the aquarium away from the sunlight and reduce the length of time that your tank lights are on. Once the algae die off, the cloudy water problem will resolve itself.

Phosphates and nitrates act as a plant fertilizer, and they also support the growth of algae. So, you can help to restrict the growth of algae by reducing the levels of those substances in your tank water, thus fixing the cloudy aquarium water problem.

You can take steps immediately by carrying out a water change, but that won’t cure the problem in the longer term. To do that, you’ll need to address the root of the problem.

Phosphates originate from two primary sources; the water source and decaying organic matter in the tank.

First of all, give the tank a really deep clean, including vacuuming the substrate and trimming dead leaves from the plants.

If the water has high phosphate levels, you will need to use RO water for your fish tank or use a chemical to remove the phosphate before topping up your aquarium. 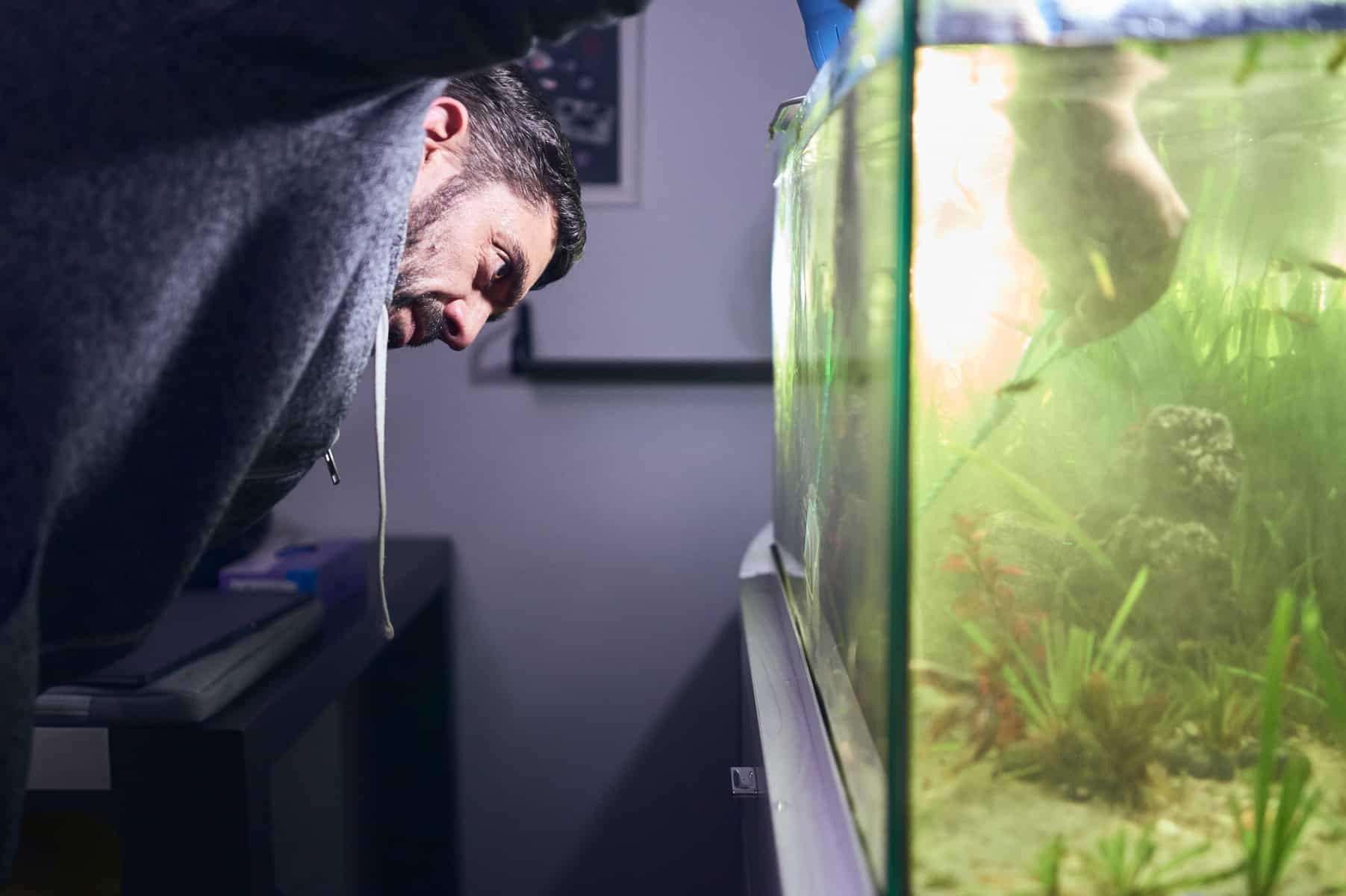 Nitrate levels rise in the tank in line with the production of fish waste. Ideally, nitrate levels should be around 20ppm or lower, and you can control that by carrying out weekly partial water changes of up to 30 percent, depending on the species of fish that you keep and the level of stocking in the tank.

Provided that your filtration system is efficient and you keep the filters clean, the nitrate levels should be relatively easy to control. Check the GPH (Gallons Per Hour) figure for your filter system. Ideally, the GPH should be at least four times the water volume of your tank, meaning that the water in your aquarium is circulated through the filter at least four times every hour. For example, if you have a 30-gallon fish tank, the GPH of your filter system must be 120 or greater.

So, if your betta tank has cloudy water, there are quite a large number of things that could be causing the problem.

If you have a new tank, you may not have allowed sufficient time for the aquarium to cycle fully, leading to bacterial bloom and cloudy aquarium water. Floating algae can cause green cloudy aquarium water, so you need to get rid of the algae, and the cloudiness will disappear. Finally, driftwood can leach brown tannins into the water, staining it a cloudy yellow color. Either soak the wood before introducing it to the aquarium or be sure to buy ready-prepared wood from a reputable fish store.

If your betta’s home develops cloudy aquarium water, do some investigating to find out the cause, and follow the advice in this guide to solve the problem.