Bettas are also sometimes called Siamese fighting fish. But, are bettas still used for combat? Is betta fish fighting illegal? And what kind of bettas are used for fighting?

Read this fascinating article to learn more about your feisty fish’s origins and if betta fish fighting is still legal.

Do Betta Fish Fight in the Wild?

Wild betta fish are highly territorial in their natural habitat, and will attack any rival male entering their patch. However, in the wild environment, male bettas tend to avoid each other, only entering into combat when absolutely necessary.

For that reason, you should never put two male bettas together in a fish tank where they have no escape from each other. As mentioned above, bettas are fiercely territorial and will certainly fight, often to the death.

What Type of Betta Fish Is Used for Fighting?

Although they are aggressive toward their own kind, the popular long-finned betta splendens commonly kept as pets are not used for fighting.

Plakat betta fish is a variety of betta that was traditionally used for fighting. Plakats are closely related to wild betta fish. These fish have stocky, powerful bodies and short fins that give the fish strength and maneuverability, making them ideal for combat.

Fish fighting was big business hundreds of years ago in the betta’s native countries of Thailand and Southeast Asia.

Plakats were specifically bred to fight in organized bouts where people would bet on which fish they thought would emerge victorious after the fight. However, there are fish measures to avoid illegal fish fights.

The History of Betta Fish Fights

The earliest record of a betta fish being bred for sport in Thailand goes back over 700 years to King Lithai of Sukhothai’s reign. In fact, records exist that allude to fish being raised for sport at this time.

The sport of betta fish fighting officially began in the country, then known as Siam, around 180 years ago. In the 1830s, the King of Siam started collecting and breeding bettas and organizing fights.

In 1840, he licensed fighting bettas and even began collecting taxes on them. There are many animal cruelty laws that regulate animal fighting in Asian countries, especially betta fish.

These days, fish fighting is widely classified as a “blood sport” and is illegal in the U.S., U.K., and Australia. In fact, it’s also illegal to breed fish for fighting.

However, Plakat fighting is still legal in parts of Thailand today, with competitions being held regularly.

Gambling is illegal in Thailand, except for the national lottery and two horse racing tracks in Bangkok. That said, rural police forces tend to turn a blind eye to fish fights.

Outside of Thailand and Asia, Plakat bettas are not bred for their fighting prowess but for their looks. For example, in the U.S., a good example of a Plakat will have symmetrical scales, a stocky body shape, and small, well-balanced finnage.

However, in Thailand, a well-bred Plakat fish from a line of successful fighters can command a high price, with enthusiasts willing to pay anything up to $65 or more.

It’s easy to see why breeding Siamese fighting fish in Thailand can be a worthwhile hobby!

Fighting Plakats are not found for sale in pet shops or fish stores. That’s mainly because fish fighting is illegal in the U.S. but also because Plakats are rather plain in appearance, and the more ornamental types of betta are much more popular.

However, you can occasionally find Plakats for sale on auction websites, such as Aquabid.com, or you can buy them directly from an online Thai breeder.

Fighting Plakats are available in many strains and types depending on their countries of origin, such as Singapore, Indonesia, Cambodia, Vietnam, and Malaysia.

If you decide to buy a regular Plakat betta from a local supplier, do remember that, although these come in different colors and forms, they are still hardwired to be fighters like their ancestors.

Therefore, we recommend that you restrict tank mates to snails and shrimp rather than other fish.

As we said earlier in this guide, fighting betta fish are known in Thailand as Plakat Mohr. Within that group of bettas, certain physical and behavioral characteristics relate directly to the fish’s fighting ability and effectiveness.

Those characteristics are given specific terms, including “force bite,” “strong mouth,” and “good skin.” The betta’s fighting style is also given a special name, such as “fins,” “face,” “ear,” and “stomach.”

Other crucial fight elements, including the fish’s stamina and teeth type, are also considered.

One example of a fighting Plakat is the Spoonhead betta. Spoonheads are a variety of the Snakehead Plakat Mohr.

Spoonheads are bred to be incredibly fast and agile, with an extremely curved mouth that can be precisely aimed at the fish’s opponent during a fight.

In countries where betta fish fights are illegal, the bouts are held privately behind closed doors in secret locations that are well away from prying eyes that might alert the authorities.

The fish are displayed in glass vases and placed in two rows. The audience of punters gathers around the fighters to assess them and place bets on the likely outcomes of fights.

A referee weighs the fish and matches them by weight and overall size, pitting contestants of similar size against each other so that the fight is “fair.”

It’s essential that the fish are of a similar size, as any disparity between them makes the outcome of the battle too obvious. If the fish are not of equal size, the match is not a good betting prospect when setting the odds on each contestant.

What Happens at a Betta Fish Fight? 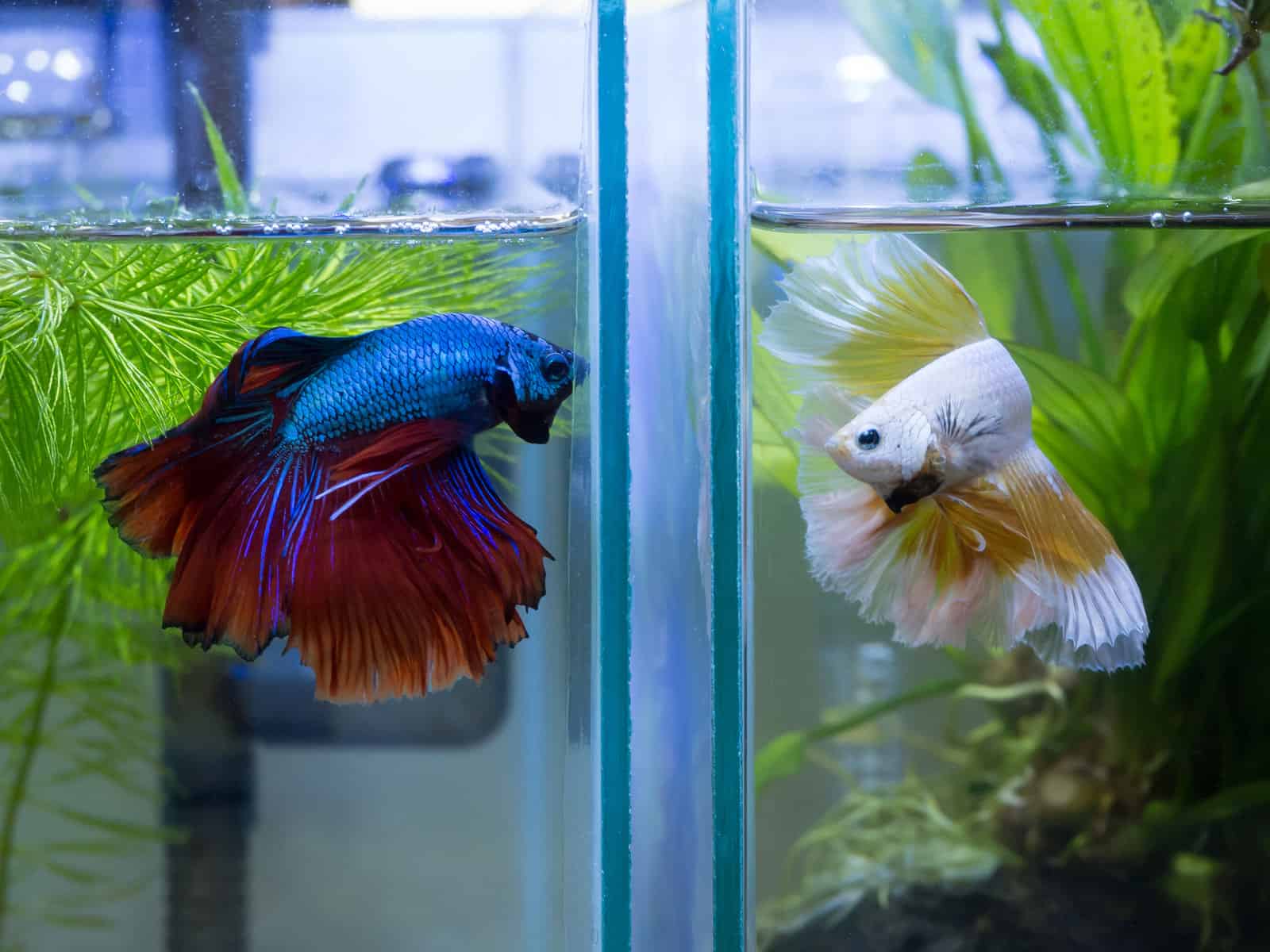 Once the referee has chosen the two combatants, they are dropped into one jar, and the fight begins.

Fights can go on for up to three hours!

Any fish that flees from its opponent is separated and observed closely. If the fish flares again, the owner can decide whether to concede defeat or continue the fight. However, the owner can be fined if the fight continues and the fish is killed.

Fighting causes intense stress to both the fish involved. In many cases, that stress is so great that both fish can die. Sometimes, the fight organizers pay a fee to the owner of the fish that dies. Other times, the owner is fined.

Whatever the outcome, fighting is guaranteed to shorten the lifespan of a betta fish. Stress compromises the fish’s immune system, leaving the betta susceptible to attack by parasites and diseases.

It’s common for an opponent’s fish to be poisoned, and switching small fish for a larger one of similar color is also a regular occurrence. Sometimes, bottles are chosen that make the fish appear much smaller than their actual size!

As mentioned above, fighting is extremely stressful for the fish. If the fish aren’t fatally injured during the fight, the event’s stress can kill them.

Wild betta fish generally avoid physical fights. After all, a fish doesn’t want to sustain an injury that might prove fatal. Often, disputes between wild bettas entail lots of posturing and flaring rather than physical attacks.

Usually, one fish backs down and concedes defeat, making off out of his rival’s territory to safety.

However, in captive betta fights, the fish are put in small jars or bottles where they have nowhere to escape. That makes death or serious injury far more likely.

What Are the Penalties for Illegal Betta Fish Fights?

You can see that betta fish fighting is unethical and cruel.

As such, the penalties are similar to those dispensed for dog fighting and cock fighting, ranging from fines to prison sentences, depending on the jurisdiction and the severity of the crime.

Did you enjoy our guide to betta fish fighting? If you found the article helpful, please take a moment to share it.

Plakat bettas are generally bred and used for fighting since these fish have shorter, stockier bodies and small, neat fins, making the fish more agile and faster than other betta varieties.

Of course, we do not condone fish fighting, legal or otherwise, and we do not encourage our readers to attempt it. The activity is cruel and unethical, and many betta fish die from the stress that fighting causes.