Betta fish, also known by other names, including the Siamese fighting fish, are beautiful, enigmatic creatures. That’s why they’re one of the most popular pet fish in the hobby. But since you’re visiting our site, you most likely knew that already!

Bettas are found in an amazing and wide variety of forms and colors, including white, blue, red, green, marbled, black, and gold. But is there a such thing as a pink betta?

Allow us to introduce you to this rare color morph.

Is there a pink betta fish? 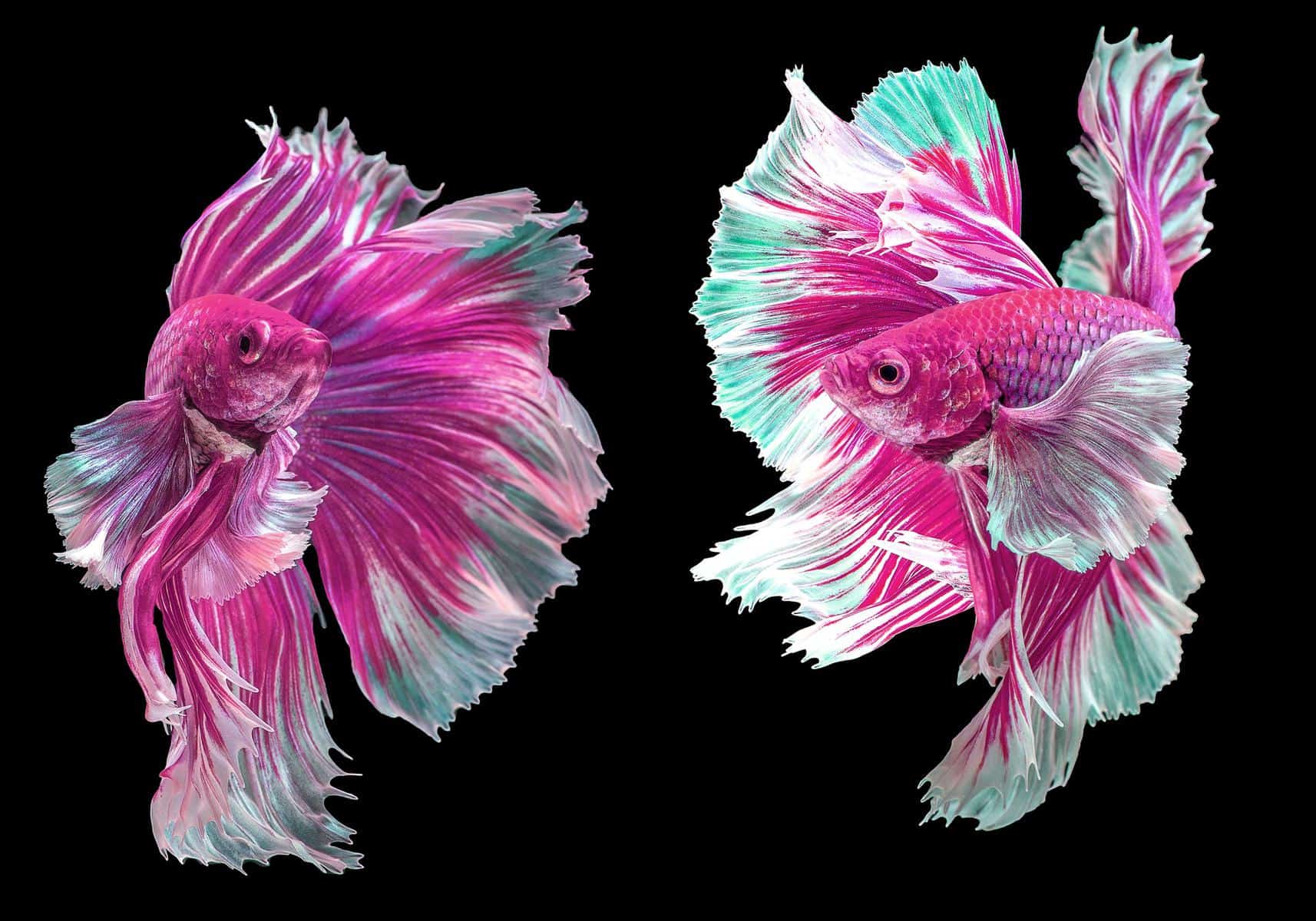 Yes, there is! Genuine pink bettas do exist, but only in captivity, and they’re hard to come by.

Wild bettas are generally drab in color, and they lack the flashy finnage of their captive counterparts. That’s because the colorful fish you see in your local pet store or online are created through many years of careful breeding and genetic engineering.

What is the rarest betta color?

Several color variations of betta fish are quite rare and seldom seen for sale in fish stores, although you can sometimes find them online on auction sites and through specialist betta breeder websites.

Although you can very occasionally find a genuine pink betta fish, there are some occasions when a betta that appears pink at first glance may not actually be the bold color at all.

Occasionally, a betta fish carries a genetic mutation that causes the fish to have no pigmentation at all. These bettas are called albinos and have pink or red eyes and white or transparent fins and scales.

So, what makes these bettas appear pink?

Well, although it might sound rather gross because the fish’s scales are transparent, you can see the tissues and organs underneath, which makes the fish look pink.

It’s very rare to see an albino betta fish in the wild, and that’s because these pale-colored fish stand out like a sore thumb and are very easily picked off by predatory birds and larger fish. Also, the fish has no protection from UV light, which can cause blindness and even skin cancers.

Like many albino animals, bettas with this mutation often have other health problems, and they don’t generally survive very long. For that reason, breeders do not seek to produce “pink” albino fish deliberately.

Just like the albino mutation, cellophane or clear betta fish have translucent or whitish scales. That means you can see the fish’s muscles and organs through the scales, and the fish’s fins also have a pinkish tinge under certain lighting.

However, if you look closely, you’ll see that these fish have black eyes, not pink ones. Cellophane bettas are bred selectively to exhibit their color, as opposed to being genetically flawed like albinos.

Some years ago, the Cambodian betta was incredibly popular, although that popularity has waned somewhat in recent years.

This beautiful color morph has a white or rosy pink body and deep red fins.

Female betta fish are more commonly pinkish-white than males. Therefore, you might think that if you keep pink female fish and a pinkish-colored male betta, you should end up with a few pink offspring.

However, most times, the complicated science of breeding bettas fails to produce the results you’re expecting. That’s one reason why breeding bettas is such a popular, frustrating, and fascinating hobby.

Why is my betta fish turning pink?

Sometimes, your betta fish might change color so it becomes pink. That can happen under certain circumstances.

That being said, it’s extremely rare to buy a male betta fish in a store that’s so young that it hasn’t already changed color, though it can happen sometimes. So, you shouldn’t be too concerned if your pale pink fish starts to magically change into a dark crimson betta.

At what age do bettas change color?

Just like elderly people tend to go grey, betta fish go through a similar transformation in their senior years.

No matter what color your betta is, there’s a good chance those bright colors will start to fade as it reaches its twilight years. Bettas generally live three to five years, maybe more, depending on the genetic makeup of the individual. So, if you have a fish of that age, its colors might start to fade.

A betta usually begins to fade from its fins first. The color gradually gets paler across the beautiful fish’s head, then covers the entire body. That means a bright crimson betta could end up turning pink as the fish ages.

If your betta is sick or isn’t thriving, it’s common for its color to fade. Generally, the sicker the fish is, the paler it gets. Diseases, like fungal and bacterial infections, are often the cause of the betta losing its vivid coloration.

So, if you have a relatively young betta that starts losing its color, check the water quality in the tank and look out for other signs of disease. Usually, it’s possible to successfully treat most common fish diseases. Once your betta is on the road to recovery, its color should start to return.

When a person is terrified, they often turn pale, as if they’d seen a ghost. Interestingly enough, your betta buddy can also turn pale when it’s very stressed or upset by something.

So, if conditions in the tank are poor, your betta is being harassed by an aggressive tank mate, or maybe your pet cat is chasing your betta buddy through the glass of its aquarium, it’s likely that your fish will lose some of its colors.

Luckily, a stress-related color loss is typically temporary. Once the source of the stress has been removed and your betta is relaxed and happy again, its colors should return to normal.

Stress is a very serious condition among all fish species because it weakens their immune systems and leaves them open to attack by diseases and parasites. So, it’s up to you to identify the cause of your fishy friend’s stress and remedy it right away.

White female bettas can develop reddish-colored stripes that can make them look pink. However, those stripes are usually associated with breeding and often fade once spawning is complete.

Male bettas that develop horizontal stripes are usually stressed, which is not a good thing at all. Stress stripes can be white, black, red, or a combination of all three, running along the fish’s sides from its gill to its tail.

If your betta fish develops stress stripes, you need to do some detective work to determine why your betta buddy is stressed and take immediate action to fix things.

If your betta is stressed, there’s a chance its color will fade, and your vibrant crimson fish could morph into a pale pink shadow of its former self. But what causes stress?

Some bettas get very stressed by simply being introduced to the beautiful new aquarium you’ve set up for them. That’s often the case with fish that have lived in a tiny display box in the fish store for many weeks.

If you notice that the gorgeous red betta you brought home from the pet shop has faded to a drab pinkish color within a few days of you putting it in its new tank, don’t worry; usually, after a week or so, your fish will gradually color up again.

Your betta may also be stressed out because of a dirty, unsanitary tank, and that’s on you!

We cannot stress enough that keeping your betta’s tank clean and well-maintained is critical to your fishy friend’s wellbeing. Bettas are extremely sensitive to water temperature and cleanliness, so your aquarium must have a heater and an efficient filtration system.

You need to carry out 20 to 25 percent partial water changes every week, and you also need to vacuum the substrate to get rid of any build-up of fish waste, plant debris, or uneaten fish food.

Once your betta tank is clean and the water parameters are correct, your fish should slowly get its color back.

And finally, bettas are also very sensitive to water temperature, which is why you must have a heater in your tank to keep the water at a stable and correct temperature.

Bettas are a tropical species that must have a water temperature of between 78 to 80 degrees Fahrenheit. If the water is too warm, your fish will become stressed, and if the temperature is too cool, your betta’s metabolism will slow right down, causing stress and digestive disorders.

So, if your bright red fish suddenly begins to fade to a drab pink color, make sure the water temperature is correct. We recommend using a decent quality aquarium thermometer to keep an eye on the tank temperature and spot and rectify problems quickly.

Occasionally, you can find a genuine pink betta fish, but these creatures are pretty rare, and you won’t generally find one for sale in your local fish store.

However, if you have a betta that started out red and fades to pink, it’s usually an indicator that all is not well. Check the tank to make sure ammonia and nitrite levels are at zero and that nitrates are 20 ppm or less. Also, check that the temperature is within acceptable parameters and is comfortable for your betta.

Remember that senior betta fish do fade as they reach the end of their lifespans, so, any color change could be an indication that your fishy friend is simply getting older.