That’s a question you’ll be asking yourself if you’re looking for suitable tankmates for your betta buddy. The Redtail shark is an attractive fish and makes a great addition to a community tank, but would one of these guys get along with your betta?

In this guide, we answer that question, as well as giving you an overview of how the two species’ care requirements compare.

What is a Redtail shark?

The Redtail shark is a beautiful and striking fish that has a long, streamlined body and small fins. The fish has a downward-pointing mouth with two barbs on either side. The fish’s body is matte black, and the tail is a brilliantly contrasting flame-red. When stressed, the colors fade, especially that of the tail fin.

The Redtail shark was found in many regions across Thailand. However, the species was thought to be extinct in 1996, largely due to high levels of pollution in its natural habitat and overfishing for the aquarium trade. However, in 2011, a small population of Redtail sharks was discovered in the Chao Phraya basin. Redtail sharks now appear on the IUCN Red List as Threatened, and at the time of writing, it is still unknown if there are any of these stunning fish left in the wild.

Despite their fragile live population, the Redtail shark is surprisingly widely available, and you can often find them in good fish stores for just a few dollars or online. These days, the specimens that you buy from the trade are captive-bred, so you can purchase your fish without worrying that you are further decimating the wild populations.

As you already know, if you have a male betta fish, they can be belligerent characters and can be aggressive toward strangers in their territory, especially if confronted by brightly-colored fish and those with flowing fins.

Unfortunately, the Redtail shark has a similar surly temperament to that of the betta, and they are extremely territorial too. However, although they will chase other fish, Retails do not bite or attack their tankmates.

Luckily, Redtails tend to spend most of their time on the substrate or in the bottom area of the tank, whereas the betta prefers to inhabit the top of the water column, feeding at the surface and occasionally taking gulps of air via his labyrinth organ.

Both bettas and Redtail sharks do not tolerate others of their species in the same tank, so you can only keep one of each. 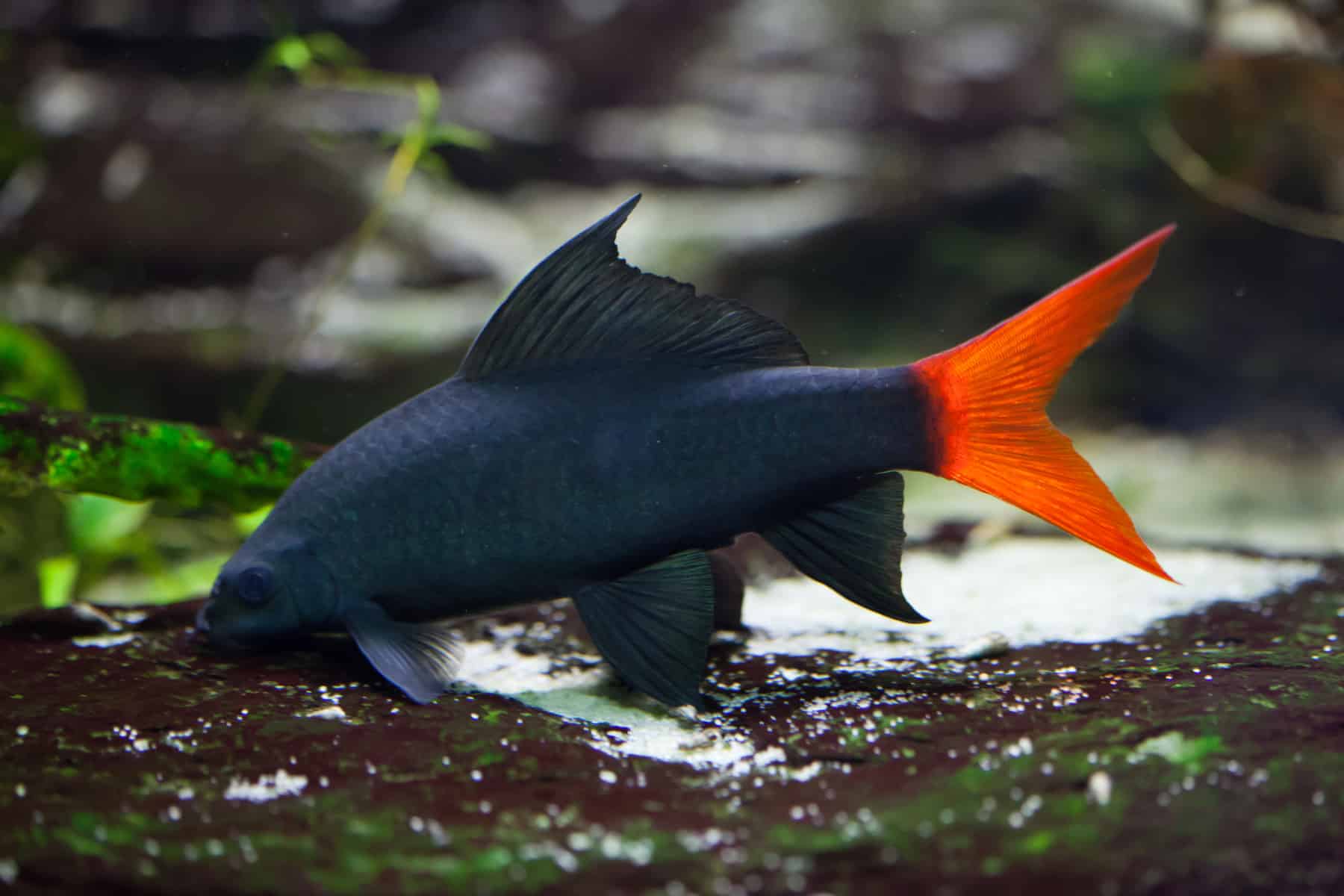 Betta fish typically grow to measure around two inches long, although your fish may appear much bigger than that if you have a variety of betta splendens with luxuriant, trailing finnage.

In comparison, the Redtail shark can grow much bigger, reaching between five and six inches in length at maturity. That size difference can lead to the shark using his size to dominate the betta. However, you may be able to overcome that problem by introducing the shark as a small juvenile so that the betta is able to establish dominance while the Redtail is still small.

Betta fish have quite a short captive lifespan, surviving for up to four years if given the correct care and a high-quality diet. Redtail sharks have been known to live for up to 15 years in captivity, although six years is the norm.

If harmony is to be maintained between your betta and a Retail, you must get the size of their tank correct. Redtails are very active swimmers, and if they don’t have sufficient swimming space, they can become stressed, and their aggression levels rise. Juvenile Redtail sharks must be kept in a tank no smaller than 29 gallons, and full-grown adults won’t be happy in a tank of fewer than 55 gallons.

Both bettas and Retails do best in a long tank rather than a tall, deep one. A long tank provides the shark with lots of swimming space and means that the betta won’t struggle to get to the surface, which can sometimes happen with fish that have particularly extravagant finnage.

Redtail sharks come from Thailand, where they live in freshwater ponds. Bettas also inhabit slow-moving water and also come from Asia. Both species prefer a habitat that’s heavily planted and contains rocks and driftwood on which they can rest.

Be sure to include some caves or rocky overhangs so that your betta has somewhere to hide. If possible, create distinct sections within the habitat so that your Redtail and your betta can both establish a separate territory. When choosing your decorations, make sure that you don’t include anything that has sharp edges that could damage your betta’s trailing fins.

The inclusion of plant matter is especially important in a juvenile Redtail’s diet, as a deficiency of vegetation can cause the fish to lose their color and fail to grow. Redtails do well on a diet of flakes, pellets, frozen, and live foods. Like your betta, Redtails enjoy bloodworms, brine shrimp, and daphnia, and they will also eat algae and fresh boiled veggies such as peas, lettuce, zucchini, and cucumber.

It’s a good idea to feed your betta and your Redtail at opposite ends of the tank to prevent a greedy betta from grabbing all the food, leaving his tankmate to go hungry. Feed both fish two to three times daily, offering them enough food to keep them occupied for just a couple of minutes. 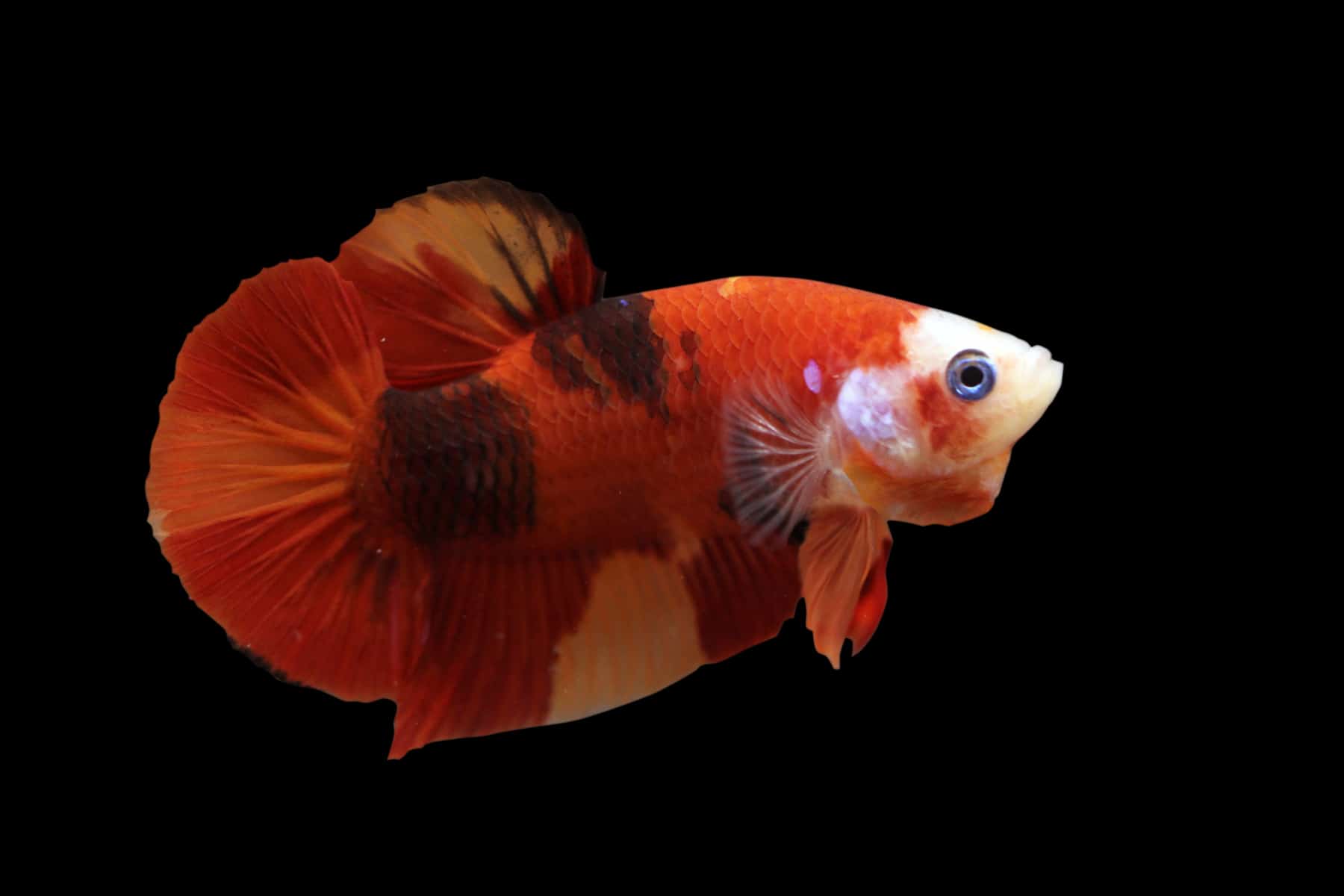 Bettas and Redtail sharks are tropical fish, and they share the same basic requirements when it comes to water conditions.

Both species’ preferred water temperature is between 72° and 82° Fahrenheit with a water pH of between 6.8 and 7.5.

Tips to make it work

So, although it may not be a marriage made in heaven, you can make the unlikely pairing of a betta fish and Redtail shark work if you take a few precautions.

If you already have a betta fish, make sure that you choose a juvenile Redtail shark to add to the mix. That arrangement allows your betta to establish himself at the top of the pecking order and mark his territory. Once that’s happened, the Redtail should not be aggressive toward the betta as it matures.

If possible, change your tank for the largest one you can afford or that will fit in your house. Redtail sharks need plenty of swimming space, and the more room they have, they are less likely to bother your betta. A long, deep tank is the best shape to go for, as that allows the Redtail to swim on the bottom, while the betta sticks to the upper area of the water column.

Both species are highly territorial. So, you can help avoid friction between the two by creating a habitat that contains distinct areas that each fish can claim.

Use thick planting, pieces of driftwood, rocks, and resin tank ornaments to mark out clearly defined territories within the tank. Also, including floating betta logs is a great idea, as that gives the betta somewhere to hide at the water surface, well away from the Redtail’s patch.

So, in theory, you can keep a male betta with a Redtail shark. However, you will need a large tank to accommodate both species in relative harmony, as both are highly territorial and can be very aggressive if their paths cross too often.

However, both species enjoy similar water conditions, and they do live in separate parts of the water column. So, provided that you give the fish enough space to establish their own territories, peace can be achieved.