Preparing for a power outage as a betta fish owner isn’t a bad idea. Betta fish are pretty sensitive to water temperature changes and water conditions. When a power failure occurs, being adequately prepared for such an emergency situation could save the life of your beloved betta buddy.

To help you, we’ve put together some quick and simple guidelines on how to care for your betta fish during a power outage.

Keep reading to find out what to do to keep your fish safe when the lights go out!

How Long Can Betta Fish Survive A Power Outage?

The general consensus among hobbyists is that most fish can survive for around two days during a power outage. However, that depends on a number of factors, including:

For example, in a small, crowded aquarium with no live plants, the water quality will deteriorate more rapidly without the filter than in a large, sparsely populated tank full of lush planting.

How Long Can A Betta Fish Live Without A Heater?

Bettas are tropical fish that must live in water temperatures between 75 and 80 degrees Fahrenheit. Cooler water causes the betta’s metabolism to slow down to dangerous levels. In water that’s too warm, the opposite happens.

Any water temperature variation will cause your betta to become highly stressed, leading to a compromised immune system and outbreaks of disease. In theory, your betta should be okay if the tank is in a warm room with a stable temperature of around 75 degrees or slightly above.

How Many Hours Can Fish Live Without Oxygen?

Freshwater fish can survive for roughly two days in completely still water without an oxygen supply. In fact, bettas might be able to survive for a little longer than that, thanks to their environmental adaptations.

Well, in the wild, betta fish live in relatively still water bodies, such as rice paddies, ditches, and ponds, where the oxygen levels are low. Unlike many typical aquarium fish, bettas have evolved a labyrinth organ that enables them to breathe atmospheric air by darting to the surface and taking a gulp.

Interestingly, bettas actually need to breathe air through their labyrinth organ regularly, as they can’t get all the dissolved oxygen they need from the water alone. So, your betta fish is probably better equipped than most other fish species in the event of a power grid failure.

What Happens To Your Aquarium And Fish During A Power Outage?

Your betta tank has a filtration system, a light, and a heater, and you might also have a bubbler. When the power fails, several things happen:

When the power fails, the filter stops working.

When that happens, the water stops circulating around the tank and through the filter media. That means the beneficial bacteria in the filter are starved of food and oxygen. If the power outage goes on for too long, the bacteria will begin to die.

If the bacteria colonies die, there will be nothing in the filter media to process harmful ammonia given off by fish waste and decaying organic matter. So, the water in the tank will quickly become foul and toxic to your betta.

If your power is out for an hour or more, take out some of the filter media and keep it in a bucket with some aquarium water so that the media remains moist.

The filter pump also helps to aerate the water in your betta’s tank by agitating the surface and providing water movement. Without that, oxygen levels in the water will fall, making it difficult for your betta to breathe. Keeping a handy battery-operated air pump on standby can be a lifesaver.

Not everyone keeps a bubbler in their betta tank. However, if you have a bubbler and it stops working, the surface agitation the device provides will cease, leading to reduced oxygen levels in the water.

Although your betta doesn’t strictly need light to survive, a clear day and night cycle is necessary for him to thrive.

If your betta is left in perpetual darkness, he won’t know when to become active and eat and when to sleep and rest for the night. That causes stress, which is ultimately likely to lead to disease and possibly even death.

Living plants must have at least eight hours of light every day to photosynthesize. Without light, the plants will gradually turn yellow and die off. Decomposing plants will pollute the tank water, and if the plants can’t produce oxygen through photosynthesis, the dissolved oxygen content in the water will be much reduced.

If your heater fails, the water will either become too warm or too hot, depending on the ambient temperature in the room and the time of the year.

Bettas are very sensitive to extremes of temperature, and prolonged exposure to unsuitable conditions could ultimately kill your pet.

How To Keep The Tank Warm

If the power outage happens during the winter months when the weather is cold, you’ll need to take prompt action to save your betta buddy! Insulate the betta’s tank with a blanket, some newspapers, or a sleeping bag.

Check the water temperature with an aquarium thermometer. Ideally, you want to maintain the ideal 78 to 80 degrees Fahrenheit in the aquarium if at all possible. Bettas can survive at lower temperatures, but not for long.

Try running an alternate power supply to the aquarium heater. An emergency generator can work well, or you could run a long extension cord to a place that you know has power. Portable propane and kerosene heaters made for indoor use also work fine if you have them. 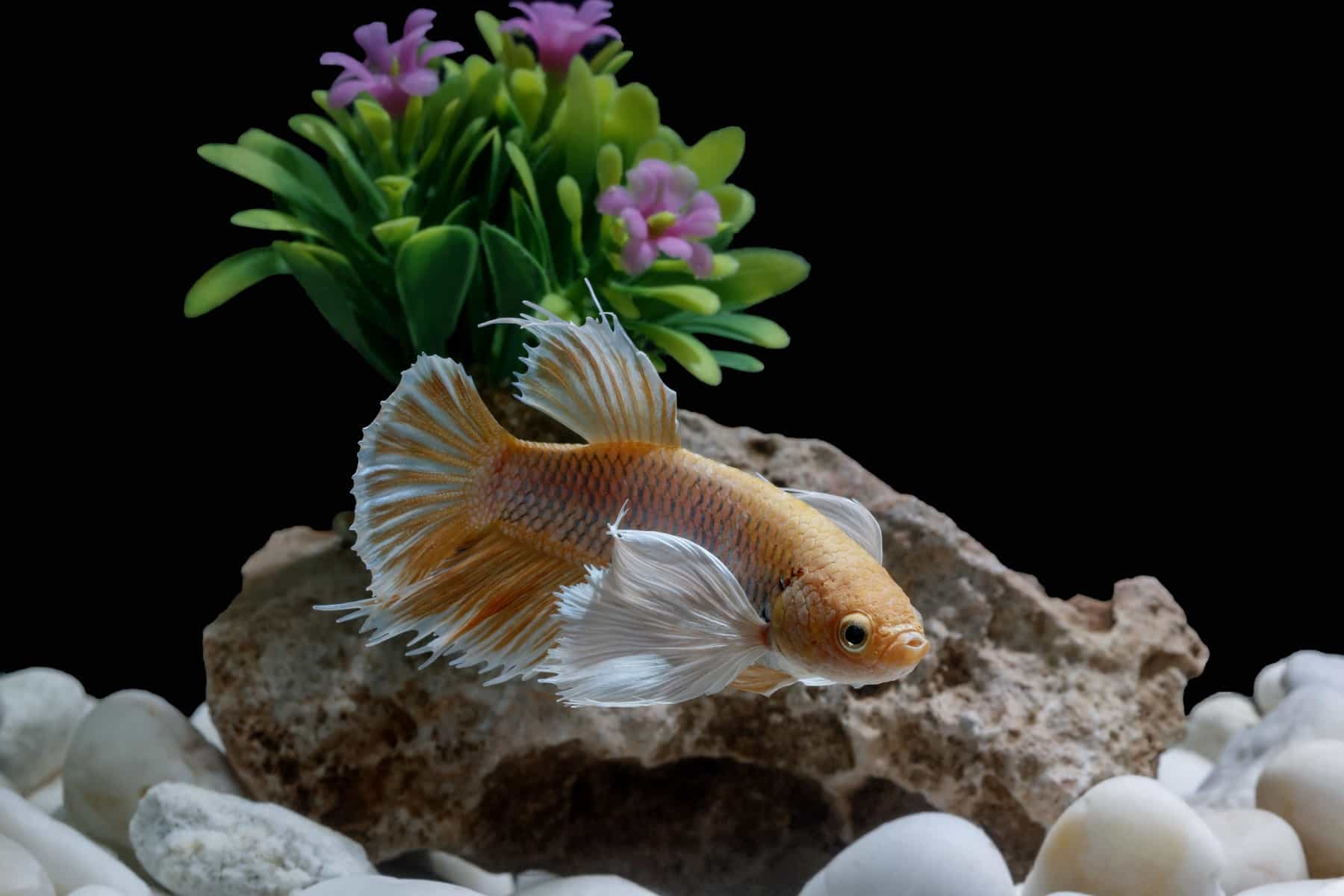 If you’re expecting a long-term power outage, you can transport your fish to a warmer location or somewhere with a power source.

If you have a very large aquarium that is impossible to move, you should use a temporary container to transport your betta. A 1-gallon zipper-locked plastic bag will suffice in a pinch. Fill the bag only 1/3 of the way with tank water and the rest with air. Your betta should survive for about 36 hours in this temporary setup.

If you have a large tank, you can remove up to 70% of the water to make moving the tank easier. However, we recommend keeping a smaller, more portable temporary tank handy for emergencies.

If your heater fails and you need to warm the water fairly quickly, you could add warm, dechlorinated water to your betta tank.

The temperature in your betta tank should never be more than five degrees on either side of the 78 to 80 degrees Fahrenheit sweet spot. So, add warmed water gradually at a rate of 10% of the total tank water volume every hour or so. That will keep the tank warm without stressing your betta.

Keep an eye on the water temperature by using an aquarium water thermometer to check the temperature every couple of hours.

How Do You Oxygenate An Aquarium During A Power Outage?

You can use a battery-operated air pump with a chemical filter, such as Polyfilter, to remove ammonia and nitrate from the water. Alternatively, you could try adding mature biofilter media or zeolite to an air-operated box filter.

A battery-operated pump will keep the water moving around the tank, helping to oxygenate the environment.

In the absence of any better solution, try siphoning water from the tank and pouring it back in to prevent a dangerous oxygen depletion situation.

How Long Can A Fish Tank Go Without A Filter?

The filter’s primary function is to remove waste from the water and pass it through various media where bacteria process the waste to convert it to nitrates.

Without a filter, the aquarium water will quickly accumulate pollutants, such as ammonia, given off by rotting organic waste and uneaten fish food. How quickly that happens depends on several factors:

Generally, tropical fish can survive in a tank without a functioning filter for around three days. After that time, the fish will begin to show symptoms of ammonia poisoning, potentially resulting in a mass fish kill if steps aren’t taken to remedy the situation.

You can help to remove pollutants from the water by carrying out 10% partial water changes every day the power is off and the filter isn’t working.

Remember to add dechlorinator to the fresh water before you add it to the tank. Test the water temperature to ensure that the new water is the same temperature as that in the tank.

Use an aquarium water testing kit to test the water for ammonia, nitrites, and nitrates every few hours to ensure the water is safe for your betta.

Should You Feed Your Betta Fish During A Power Outage?

During a shorter power outage, feeding should be strictly limited to what your betta will eat and no more.

While there’s no filter to process the additional fish waste generated when your feed your fish, it’s sensible not to feed your betta and the other occupants of his tank much to avoid polluting the water.

Well, depending on how warm it is where you live, your betta’s digestive system will use valuable oxygen in the water to process the food. Warmer climates encourage a faster metabolism and increased oxygen consumption, while cooler climates slow the metabolism and decrease the amount of oxygen used.

Betta fish are prone to digestive problems, such as bloat and constipation. Both those conditions can affect the betta’s swim bladder, often leaving the fish unable to swim on an even keel.

Digestive issues can be prevented by including one day per week when you don’t feed your betta fish anything. That break from eating allows the fish’s system to process any food still passing through without adding more volume to the queue.

Wild betta fish often don’t get to eat every day, depending on what’s available in their immediate environment. So, a captive betta fish won’t stress if he goes a day or two without being fed.

Fasting won’t harm your betta fish. In fact, a break from food will probably do him good, especially if he’s a greedy character!

Preparing Your Aquarium Against Power Outages

Being ready and equipped to handle a loss of power could save your betta! So, if you live in a region where power outages are commonplace, especially during the winter storm season, there are a few supplies you can have on hand just in case.

You might also want to buy a small plastic tank, like those used to house pet mice, to transport your betta if your tank is too large to move.

Did you enjoy our guide on caring for your betta fish during a power outage emergency? If you found the information helpful, please share the article!

Bettas are highly sensitive to unstable water conditions, especially water temperature. So, be prepared to relocate your betta to a safer environment if the outage is likely to be prolonged.

Keep the tank warm by wrapping it in blankets or a duvet, carry out partial water changes to prevent the tank from becoming polluted while the filter is out of action, and don’t feed your betta for a day or two until power is restored.

Do you have any tips for coping when the power goes out? If you do, let us know in the comments box below.