A recent survey carried out by the American Pet Products Association (APPA) shows that in 2019-2020, over 11 million households in the U.S. owned some variety of tropical fish, and a mind-blowing $19.2 billion was spent on purchasing pets and associated products.

With those numbers in mind, you may be looking at your beautiful betta fish swimming around his tank and wondering if you can breed bettas and sell them. Betta breeding, even on a small scale, is a fun and fascinating hobby, but what’s involved?

In this article, we explain how to breed bettas, including top tips on how to choose the best breeding pair and raise the fry.

Choosing the right breeding pair is essential if the venture is to succeed.

You can buy your betta fish from a pet or fish store, but we recommend you obtain your bettas from a reputable breeder instead. Although buying a fish from a local store will undoubtedly be cheaper, you won’t have any information about the genetics, age, and background of the fish species — all of which are crucial for successful breeding.

The best breeding age for betta fish is when they are between four and 12 months old. Older fish may produce weak or sickly fry that won’t thrive. You will also need to allow your fish a month to settle into its environment before attempting to breed them, so remember to factor that in when choosing your bettas.

What to consider when choosing a male betta for breeding

Female betta fish can be picky when it comes to choosing a suitable mate. So, if the ladies are going to be impressed with him, there are some important things to consider when choosing a male for breeding purposes.

The male betta must be full of energy and vigor. That tells the female that the male is fit, healthy, disease-free, and has a strong immune system. Weakness can be inherited by the fry, so the female wants a strong and robust specimen as her mate.

A vibrant, bright color indicates that the male has consumed enough carotenoids to boost his immune system.

Although a blue betta that’s been fed a good diet may be strong and healthy, a female will almost always choose a red male for a mate.

Healthy male bettas with a strong immune system and are successful foragers will have “clean” fins that are free from signs of injury or damage. Long, flowing fins are also much more attractive to the female.

If your male has damaged fins, it’s unlikely that he will appeal to your female.

Preparing your bettas for breeding 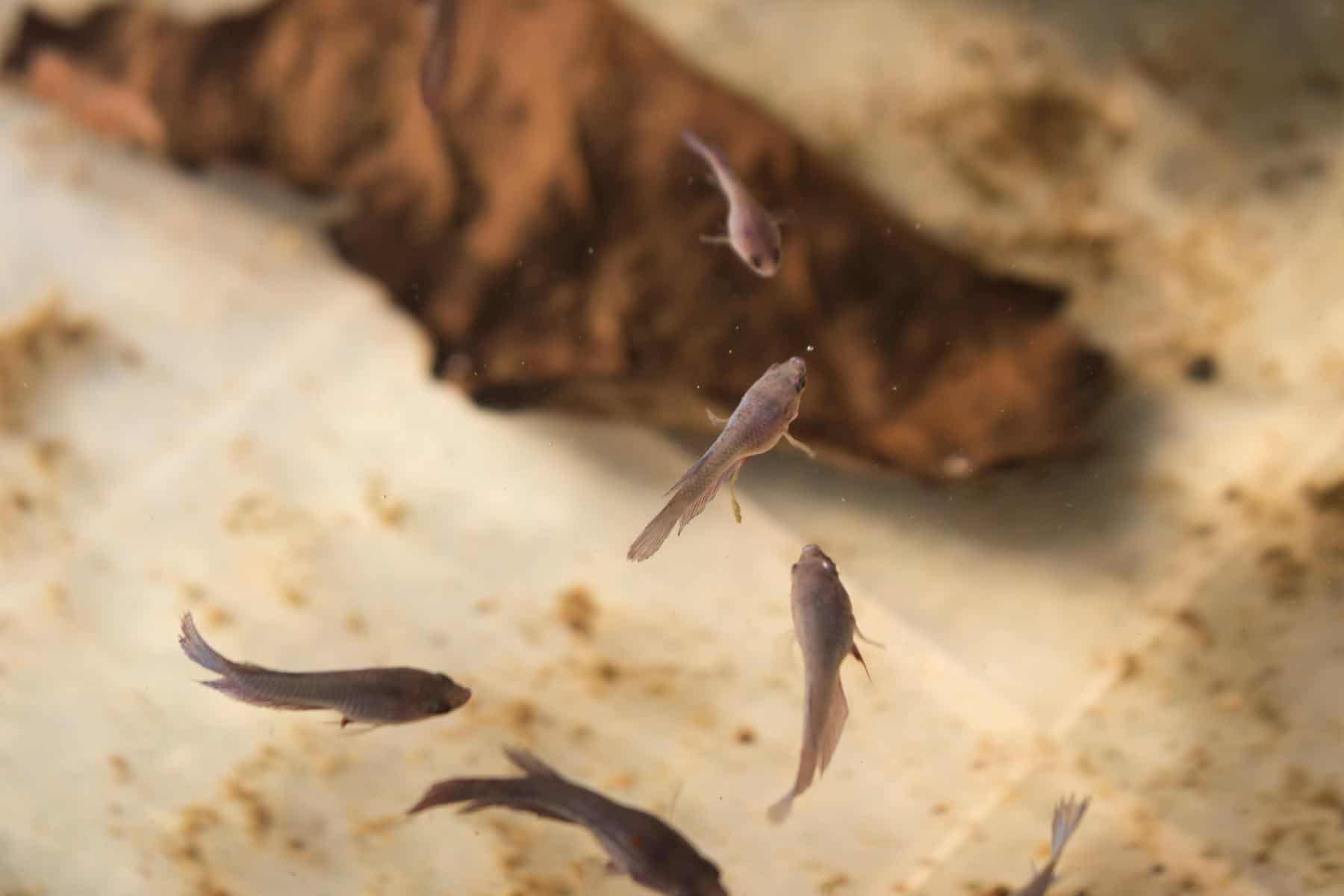 Some owners put their male and female bettas in the same tank from the beginning, and that can work. However, if you want to breed your betta fish, initially keeping them separate generally works better.

Before you can attempt to breed your bettas, you’ll need to let them settle into their respective tanks. Monitor the fish for a month or so for signs of disease and to allow them to settle.

During that time, feed your fish plenty of live food. That will help increase your male’s carotenoid levels, which will make his colors more vibrant.

Do you need a separate spawning tank?

Many newbies make the mistake of attempting to breed bettas in the male’s tank, but that won’t work!

Betta fry are extremely delicate and require pristine water if they are to survive. The male betta will only guard the fry until they are free-swimming, at which point he may view them as a threat. In the wild, the young fish will find their own territories, but they can’t do that in captivity.

So, you’ll need to set up a dedicated spawning tank and remove the male once the betta fry is independent.

Setting up the spawning tank for fish

To set up the spawning tank, you need a 10-gallon aquarium with a tight-fitting lid. Choose a site that’s away from other fish tanks and other distractions.

Add two or three inches of water to the tank; the water needs to be shallow so the betta fish fry doesn’t struggle to reach the surface.

You’ll also need a tank divider to keep the male and female apart as they acclimate to each other and some plastic wrap to create a humid environment. You’ll also need a heater set to a constant temperature of 80 degrees Fahrenheit.

A sponge filter is ideal here, as it keeps the water clean without generating a fast flow that would disturb eggs or newly-hatched betta fry, so add a simple sponge filter that’s seasoned with media from an established setup.

You don’t need substrate, as that makes it difficult for the fish to pick up the eggs, and the fry may sometimes get trapped in the gravel. A LED lighting unit with adjustable light levels is also essential.

Put clumps of Christmas moss in the tank to provide lots of hiding spots for fish and fry, and add Indian almond leaves to soften the water and provide a site where the male can build his bubble nest.

Introducing the male and female bettas

Once you have the spawning tank set up and your breeding pair are in prime condition, you can introduce them.

Add the bettas to the spawning tank

Put the female betta into the tank and allow her to settle for an hour or so before adding the male. Then, add the male to the tank on the other side of the divider.

When the male notices the female, his color will become deeper, and he will begin flaring his fins and gill covers to attract the attention of his potential partner. Some males may bite the divider, but that’s normal behavior that shouldn’t concern you.

If the female is receptive to the male’s advances and ready to breed, she will become darker in color and vertical bars will appear along her midsection. You will also notice the female’s ovipositor showing as a white speck between the ventral fins.

Some females may also flirt with the male, flaring and wagging her body at him through the divider.

An hour or so after the fish have been introduced, the male should begin constructing his bubble nest between his displays to the female. Leave the two fish separated overnight.

Introducing the male and female

Now, it’s time to begin the breeding process. Remove the divider and allow the two to meet.

The female will probably check the nest right away. If she’s unimpressed, she’ll most likely swim away, or maybe even attempt to destroy it.

When the male realizes he can get to the female, his display will intensify. He’ll chase her around the tank, encouraging her to join him in their mating “dance.”

At this stage, you’ll need to cover the tank with plastic to create humidity and keep heat inside. A humid environment is essential to the eggs’ hatching and the fry’s development. 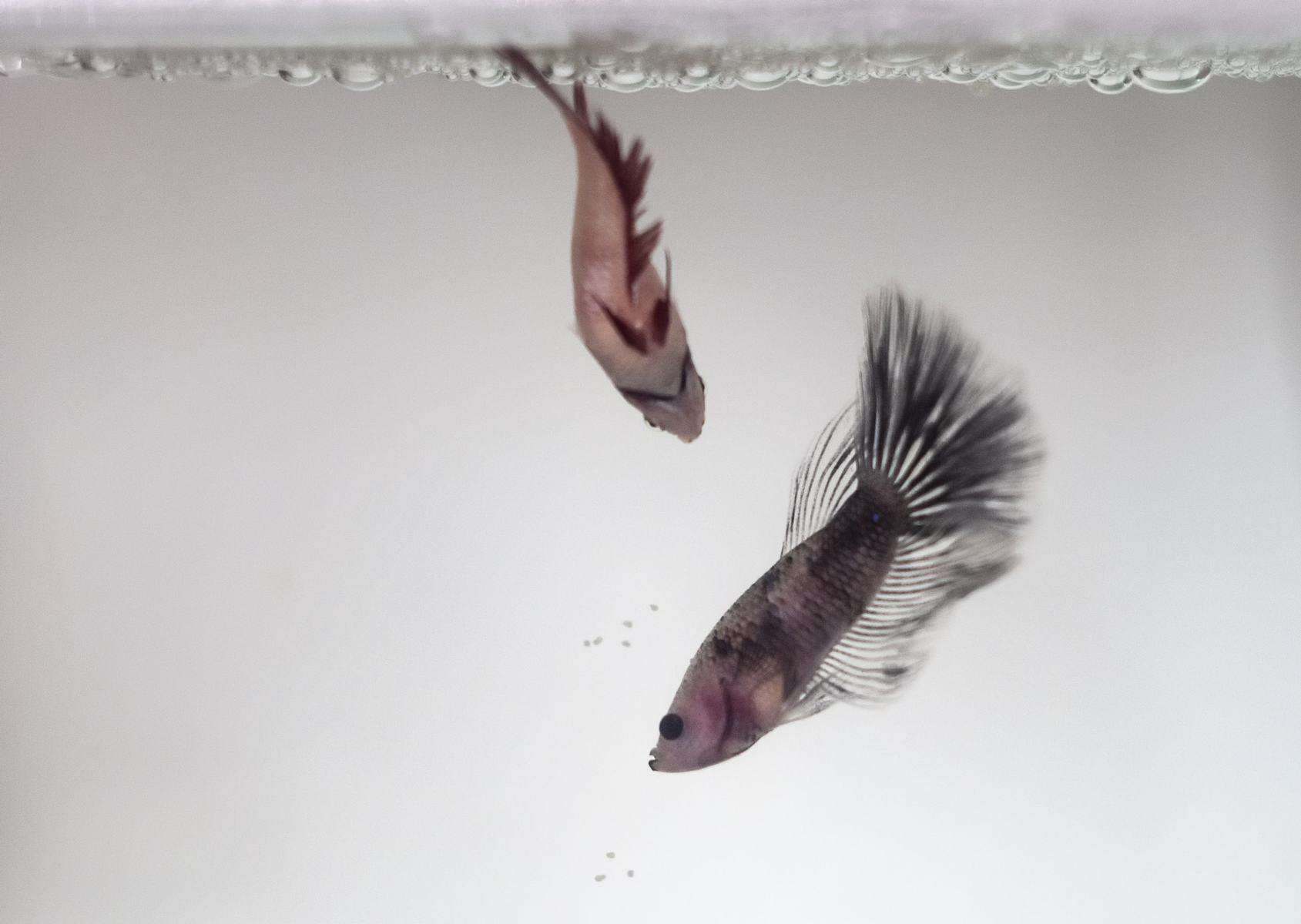 The entire process of mating can take several hours, during which time you’ll see lots of chasing and nipping. That’s completely normal, but you do need to keep an eye on proceedings in case things get out of hand and the female is injured.

Throughout the mating process, the female continues to inspect the nest. When she’s satisfied with it and ready to mate, the dance begins.

The betta couple swims side-by-side with their fins spread out, stopping every so often to flare and display their sides. Throughout the dance, the male will chase and nip at the female.

Don’t be surprised to see the female hiding among the moss to get a break from the persistent pursuit. Eventually, the male will chase her out, or she’ll approach him when she’s ready to mate.

The way the female betta chooses to proceed depends on her personality. Some approach the male directly, taking on an upside-down position with fins clamped. Others charge the male under the bubble nest, flaring and challenging him to spawn.

When the fish are ready to mate, they’ll get closer to each other until the male can flip the female upside-down, wrap himself around her, and squeeze her tightly. The couple may take a few attempts to get it right, but once successful, they sink to the bottom of the tank or float to the surface.

Then, the male releases the female to allow her a few moments of recovery time before they repeat the process.

Eventually, you’ll see the female start to drop eggs each time she’s embraced. During the embrace, the male and female’s ventrals are close together, improving the chance of fertilization. As the female drops her eggs, she appears almost dead, often floating sideways. But don’t panic; that’s perfectly normal!

As the eggs drop, the male betta begins picking them up, transferring them to the nest one egg at a time.

As she recovers from the effort of producing the eggs, the female may assist in gathering them. However, some females will eat the eggs, so keep a close eye on her and remove her from the tank immediately if that happens. It’s actually a good idea to remove the female once she’s recovered anyway, as the male is likely to view her as a threat to the bubble nest and attempt to kill her.

The eggs and the fry

Once the eggs are safely in the nest, the male spends the nest 24 to 36 hours guarding them, adding more bubbles. Sometimes, he’ll even construct another nest in a different location and transfer the eggs there.

You may see the male eating some of the eggs or fry, but that’s okay; he’s probably just removing unfertilized eggs, or sick and deformed fry.

As the fry hatch, they wriggle around to break free from the eggs, often falling out of the bubble nest. The male will catch the fry and replace them in the nest. For the first few days after hatching, the fry hangs tail-down before gradually adopting a horizontal swimming position.

Once the fry becomes free-swimming, remove the male betta.

If you’re a betta fan, you may want to dip your toes into breeding your own betta fish.

Successful breeders sell their fish online or through auction sites, sometimes for a few hundred dollars per fish, depending on the coloration and finnage of each specimen.

A betta bearing the colors of the Thai national flag was once auctioned for a record $1,500, so choose your betta breeding pair carefully, set up your spawning tank correctly, and you just may be in business!