As a new betta owner, you might be wondering if your new fishy friend sleeps. And, if betta fish do sleep, do they sleep with their eyes open or closed?

Keep reading to learn what happens to your fishy friend when the lights go out!

Most fish species, including your betta buddy, can slow their metabolism and become less active to conserve energy. However, even as they doze, wild fish can stay aware of their surroundings and keep on the alert for predators. In some cases, fish hide in nests, others creep into rocky crevices, whereas some burrowing fish disappear under the substrate to catch a few Zs in safety.

Remarkably, there are some fish species, including some varieties of sharks, that actually keep up constant swimming while they “sleep.” That’s essential to keep water flowing over the shark’s gills. Basically, if the shark stopped moving, it would eventually drown.

These periods of fishy “sleep” are referred to more correctly as “suspended animation.” Essentially, these are rest times when the fish recover from the day’s exertions and recharge their batteries, rather like other animals do when they sleep.

So, you know that your betta fish doesn’t sleep in exactly the same way that you do. However, you’ll notice that he spends long periods of time throughout the day resting, usually on a flat leaf or in a hammock.

Do Betta Fish Sleep With Their Eyes Open?

So, now you know that fish need sleep. But does your betta fish close his eyes to do so?

No, your betta sleeps with his eyes open!

Most fish species, including your betta, don’t have eyelids, so they can’t shut their eyes when sleeping. That’s why you should never leave your betta’s aquarium lights on continually.

So, why don’t fish have eyelids?

Land animals like you and me have eyelids to keep the eyeball moist and prevent dust and dirt from damaging it, which would happen regularly given that we live on dry land. In your betta’s watery world, his eyes are kept moist and clean by the water he lives in. Therefore, most fish don’t need eyelids and have evolved without them.

Even though they live underwater, fish are aware of the day/night cycle. Some fish species are most active during the daytime (diurnal), and some are more active at night (nocturnal.) Nocturnal animals tend to be predatory, using the dark to sneak up on their prey. In contrast, diurnal animals are usually herbivores or omnivores that need the daylight to see predators and find food.

When Do Fish Sleep?

Your betta fish is diurnal, so he’s mostly active during daylight hours. That means he wakes up in the morning when the sun rises and goes to sleep when the night sky reappears, and the environment is dark again.

During the day, your betta buddy will keep busy, exploring his fish tank, feeding, and interacting with his tank mates, and every now and then, he’ll take a short nap. 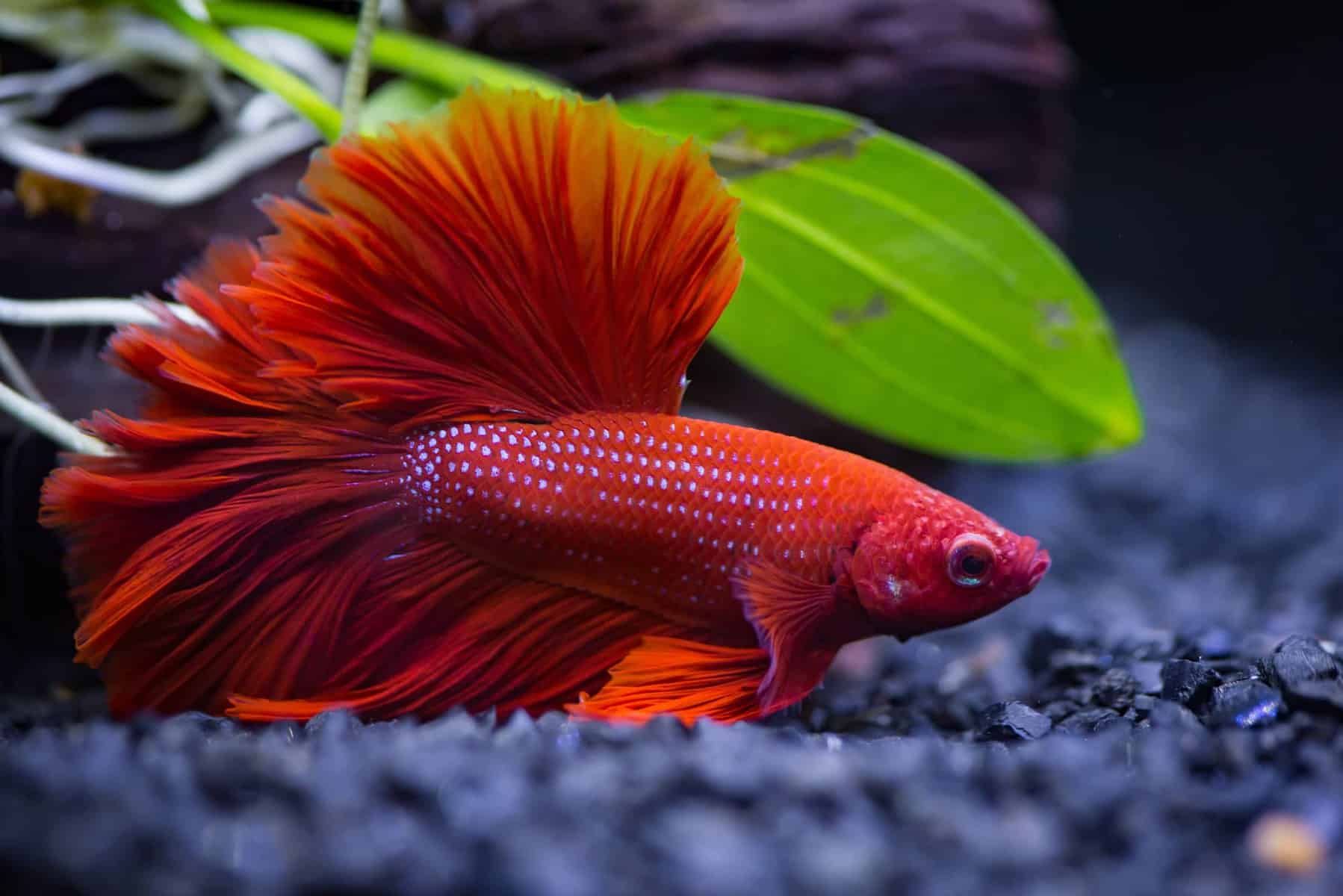 Is Your Betta Buddy Asleep?

Many new betta owners observe their fish apparently collapsed, not moving, and just laying on the substrate or a flat leaf. Panic! Is their beloved pet dead or seriously sick?

Relax, your fishy friend is most likely just taking a nap!

When you see your fish resting, totally without moving, look at his mouth and gills. If the gills are gently opening and closing and his mouth is moving, even just slightly, then your pet is probably sleeping.

You might even notice that your betta’s bright colors fade a little when he’s resting or sleeping. That’s quite normal, as betta fish change color during breeding and when tackling an aggressive tank mate or intruder on their territory.

Basically, that’s just usual betta behavior, and as long as your pet is still active between periods of sleep and he’s still eating, there’s nothing to worry about.

Can Bettas Sleep On Their Side?

Sometimes, bettas do sleep on one side, usually when snuggled in a comfortable spot among aquarium plants or on a betta hammock. That said, betta fish more usually sleep on their belly, remaining upright.

A betta that suddenly begins sleeping on his side could have a swim bladder disease, a bacterial infection, or possibly even ammonia poisoning. Most health issues can be traced back in some way to poor water quality, so test your aquarium water and carry out a water change if necessary.

Do Betta Fish Need A Bed To Sleep On?

Bettas appreciate a nice, comfy hammock to sleep on. However, they will nap on a soft area of the substrate, on flat plant leaves, and even wedged down the side of your filter box! You’ll also see some bettas simply floating motionless in the water or even sleeping vertically! It really depends on the individual betta fish.

Betta fish will sleep in any area of the tank. That said, bettas often gravitate to a suitable sleeping spot close to the water surface so that they can grab a gulp of air using their labyrinth organ.

Provided that your betta sticks to his usual sleeping habits, there’s nothing to be concerned about.

How long do bettas sleep?

So, bettas are diurnal fish that are most active during the daytime. Therefore, it’s logical to assume that the fish are mostly asleep at night. However, unless you have insomnia, you’ll never be around to witness your betta’s nighttime habits, as you’ll be fast asleep yourself!

But bettas do take regular daytime naps between bouts of activity. That’s perfectly normal behavior for betta fish. As long as your pet is still eating, showing an interest in you when you approach his tank, and is still patrolling his aquarium between naps, there’s nothing to worry about.

There are a few red flags to watch out for that could indicate that your pet is sleeping too much.

So, what’s the reason for your pet’s sudden lack of interest in his surroundings and excessive sleeping?

If the water in your betta’s tank is dirty and contains high levels of ammonia, nitrites, and nitrates, your fish will struggle to breathe. In that case, it’s likely that your betta is seriously sick and not sleeping at all!

Test the water right away. The levels of ammonia and nitrite should be zero, and nitrates should be 20ppm or thereabouts. If necessary, carry out partial water changes and keep retesting the water until those levels come down.

You should also clean the filter media to ensure that it’s not clogged with sludge or in need of replacement. Also, make sure that the impeller isn’t obstructed with debris and can spin freely.

Betta fish are extremely sensitive to water quality and temperature. If the water temperature is too high or too low, your fish could suffer from temperature shock.

Check the water temperature. If it’s too cold, gradually warm the water by doing partial changes, using warmer water. You should also check that the heater is working properly and replace it if necessary.

It’s essential that the water is warmed up gradually since heating the tank too quickly will stress your betta.

Once the water warms up, your betta should start to become more active and return to his usual self.

As mentioned above, bettas need a clear day/night cycle for their natural body clock to function properly. If there’s not enough light in the tank, your betta won’t know when he should be active and when he should be sleeping.

Ideally, your betta tank needs between eight and ten hours of light per day, especially if you have living plants in your setup. If your lighting is very dim or you have many floating plants blocking the tank light from reaching the lower reaches of the water column, you’ll need to consider thinning out the plants and possibly switching your lighting unit for a brighter one.

Bettas are quite intelligent fish that enjoy plenty of mental and physical stimulation in their environment. If your betta lives in a very boring, stale environment with little decoration and no tank mates, he will quickly become depressed and spend more time sleeping.

This problem has a quick and easy fix. Add plenty of dense planting, floating logs, resin caves, driftwood, rockwork, and other decorative items to make your betta’s environment more interesting.

Although bettas can be aggressive toward males of their own species, they get along with peaceful fish that won’t hassle them. In fact, a few suitable tank mates can help to keep your betta from getting lonely and keep him active.

Choose small, peaceful species that hang out in the bottom or midwater regions of the tank, leaving your betta’s preferred area free. That way, you won’t encourage confrontation, and the community should remain harmonious.

Fish species to avoid are large, semi-aggressive, or predatory types and fin nippers that might attack your betta’s glamorous finnage. Also, bettas can sometimes be aggressive toward fish that are brightly colored and have flowing fins. That’s probably because those species can be mistaken for another male betta.

You can include invertebrates, too, such as snails and shrimp that will also help to clean up leftover food and plant debris.

Ensure Your Betta Is Healthy

A betta that spends much of his time sleeping can often be sickening from something, such as a bacterial infection. Look closely at your fish to see if you can detect any other signs of disease, such as ulcerated skin, cotton-like growths, or reddened areas.

Bettas are also susceptible to digestive disorders, including constipation, swim bladder disorders, and bloat. Such problems can prevent your fish from swimming properly, so he might spend long periods laying on the bottom of the tank, apparently sleeping. Try fasting your fish for a 24 to 48 hour period, and then offer him frozen meaty foods or a blanched, skinned pea. That should help to get things moving again.

Just like older people, many bettas tend to slow down as they reach their twilight years. A betta generally lives for around four or five years when given the correct care and a high-quality diet.

So, if you have a senior betta, it’s quite normal for him to spend more time napping and less time swimming and exploring his home.

Just like people, some bettas are just plain bone idle!

And like people, your fish will get fat if he eats too much and doesn’t move enough. That can cause health problems and even shorten your betta’s life expectancy.

So, give your betta some active tank mates to encourage him to interact and perhaps convince your pet that playing with a few toys is a great idea.

So, now you know that your betta fish sleeps with his eyes open, simply because he doesn’t have any eyelids, so he can’t close his eyes!

But there’s a lot more to understand about betta’s sleep patterns. Generally, bettas sleep at night, but they also take lots of short naps throughout the daytime. Provide your pet with plenty of comfy places where he can take a snooze if he wants to, such as flat-leaf plants, betta hammocks, and flat surfaces close to the water surface. Also, you need to make sure that your betta buddy enjoys between eight and ten hours of light during the daytime and darkness at night.

Where does your betta fish like to take his naps? Tell us all about your dozing fish in the comments box below.