Believe it or not, gouramis are actually related to betta fish; they both belong to the Anabantidae family, also known as labyrinth fish after their specially modified lung organ that allows them to breathe atmospheric air. While blue gouramis are usually seen as community fish, betta fish are known as being solitary fish that can’t be mixed with other species. But if they’re related, does that mean they can be housed together in the same aquarium?

Keep reading to find out everything you need to know about blue gouramis, betta fish, and tank mate compatibility between the two species!

Can betta fish be kept with gouramis?

No, betta fish cannot be kept with gouramis. But what if you’re keeping female bettas with pearl gouramis (Trichopodus leerii), one of the more peaceful species of gourami? Still no. While these fish might come from the same family, they are not compatible tank mates in the aquarium hobby.

Both bettas and gouramis are from the same scientific family. They are labyrinth fish with stunning colors and bold personalities, but very aggressive and territorial behaviors. While some aquatic informational sites have gouramis listed as peaceful community fish, some hobbyists have actually likened their personalities to that of betta fish!

It is even believed that gourami aggression varies across species, with dwarf variations (Trichogaster lalius) being the most aggressive. At the same time, blue gouramis (Trichopodus trichopterus), also known as the three-spot or opaline gourami, grow much larger and have been known to chase and bite bettas and even kill them.

For the most part, this is due to the natural heightened aggression of both species. Gouramis, typically being much larger and faster than bettas, can quickly nip at fins until the other fish has left the territory. Similar body shape and coloration can also cause these fish to become aggressive towards each other, though usually these behaviors are caused by territorial issues first. 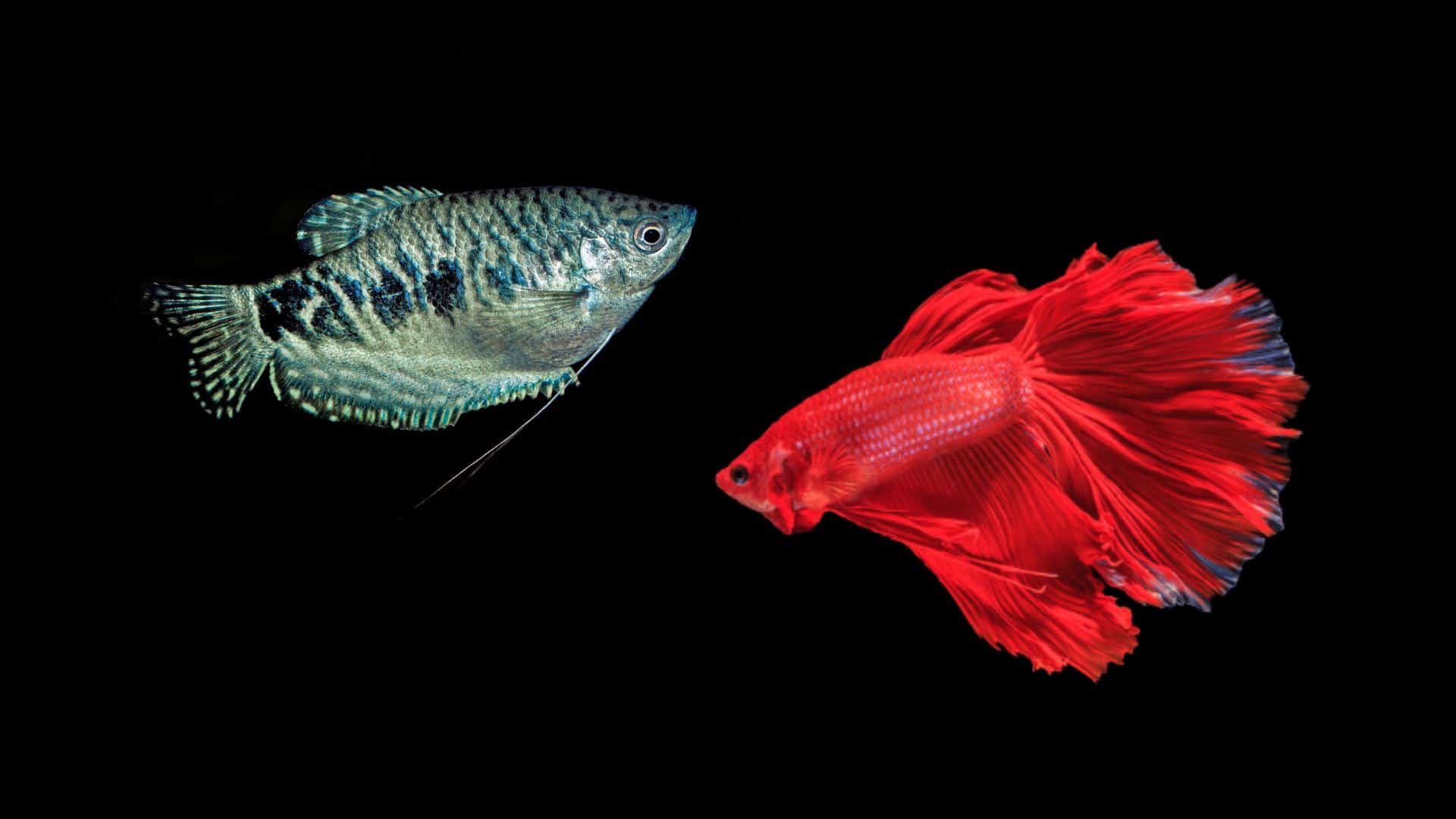 Can female bettas live with gouramis?

It is falsely believed that female bettas are much less aggressive than their male counterparts. This simply isn’t true and some females can be even more aggressive than some males. However, as we hinted at before, the problem isn’t actually with the betta, it’s with the gourami.

Even though you might have a very dominant female, it is still very likely for the gourami to outcompete her and even kill her. It’s not unheard of for one gourami to completely wipe out a carefully-selected harem of female bettas, even in a tank over 50 gallons (189.0 L) with lots of room and vegetation.

In general, it’s never recommended to attempt to keep any species of gourami with male or female bettas even though some hobbyists have had long-term success with this pairing.

Hybrids are the result of genetically-similar organisms mating and creating a mixed-offspring that is usually sterile. Usually, this happens across species within a genus, though some hybridization across genera has also occurred; while hybridization can be monitored and manipulated, it commonly happens on its own in the wild and can lead to further species if offspring are fertile.

As we mentioned before, bettas and gouramis both come from the same family, Anabantidae. These fish can also have similar-looking features, which might lead to suspicions of possible hybridization. However, betta fish belong to the Betta genus while most aquarium gourami species of fish belong to the Trichogaster genus. This relationship is not close enough to produce offspring.

That being said, some hobbyists have observed pairing characteristics between their bettas and gouramis, with some rumors even describing getting bubble nests from the pair. Remember, it’s extremely rare for a betta and gourami to get along in an aquarium setting, let alone to go as far as to pair up and display breeding behaviors.

What are good betta tank mates?

While it’s believed that most betta fish do best on their own in the aquarium setting, there are some fish and invertebrates that can be kept with your betta given some extra consideration. Some of these possible choices are:

In general, betta fish do best when the tank is set up around them. Though some hobbyists have had success keeping betta fish in traditional community tank setups, we recommend stocking the tank around the betta and not adding any other showpiece fish that could end up becoming a problem.

While there have been stories of hobbyists successfully keeping gouramis with betta fish–even to the point of hybridization–the pairing is almost guaranteed to fail. Both of these fish have very strong personalities and aren’t afraid to defend their territories. It might come as a surprise, but the gourami will actually usually be the one to attack and kill the betta instead of being in reverse.

Remember that just because female bettas have a reputation for being more docile does not mean that they can be kept with gouramis either.

If you have any questions about why you can’t keep gouramis with betta fish, want to know more about certain gourami species or betta breeds, or have somehow made this pairing work in your own aquarium, don’t hesitate to leave a comment below!