If you’re looking for a pet fish that’s a little more exciting than a standard goldfish, there are plenty of fantastic and eye-catching specimens from which to choose. In a completely biased opinion, two of the most splendid freshwater fish are the glofish and betta.

What Is a Betta Fish?

A betta, or the Siamese fighting fish, is a freshwater fish native to Asia. It is recognizable by its bright colors and lavish fins.

They are often exploited for their vibrant and colorful appearance and frequently sold as “decoration.” Some retailers will stock them inside flower vases to specifically market them as household décor.

However, these containers contribute to a shorter lifespan and poor health for the betta fish because of their small size. Instead of being treated as decoration, the betta fish requires proper care to thrive.

What Are Betta Fish Known For?

Betta fish have a notorious temperament and are prone to depression, loneliness, and frustration. They don’t do very well inside a very small tank, and they’re very territorial towards others of their kind, hence the name Siamese fighting fish.

Highly intelligent, a betta fish can come to recognize its owner and even express joy at seeing them. They need more mental stimulation than other fish and benefit from new aquarium features.

If they share a large enough tank, a betta fish can easily coexist alongside other fish species. They don’t get on so well with other bettas, so you must keep them in separate tanks if you get more than one.

Betta fish colors are the product of captivity breeding, meant to show off their bright colors and patterns at all times. Betta fish aren’t actually all that vibrant in the wild unless they are threatened or upset.

The males are traditionally much more striking than the females. Their colors range from super red to turquoise to gold, and they have just as many patterns and fin variations.

Can a Betta be a Glofish? 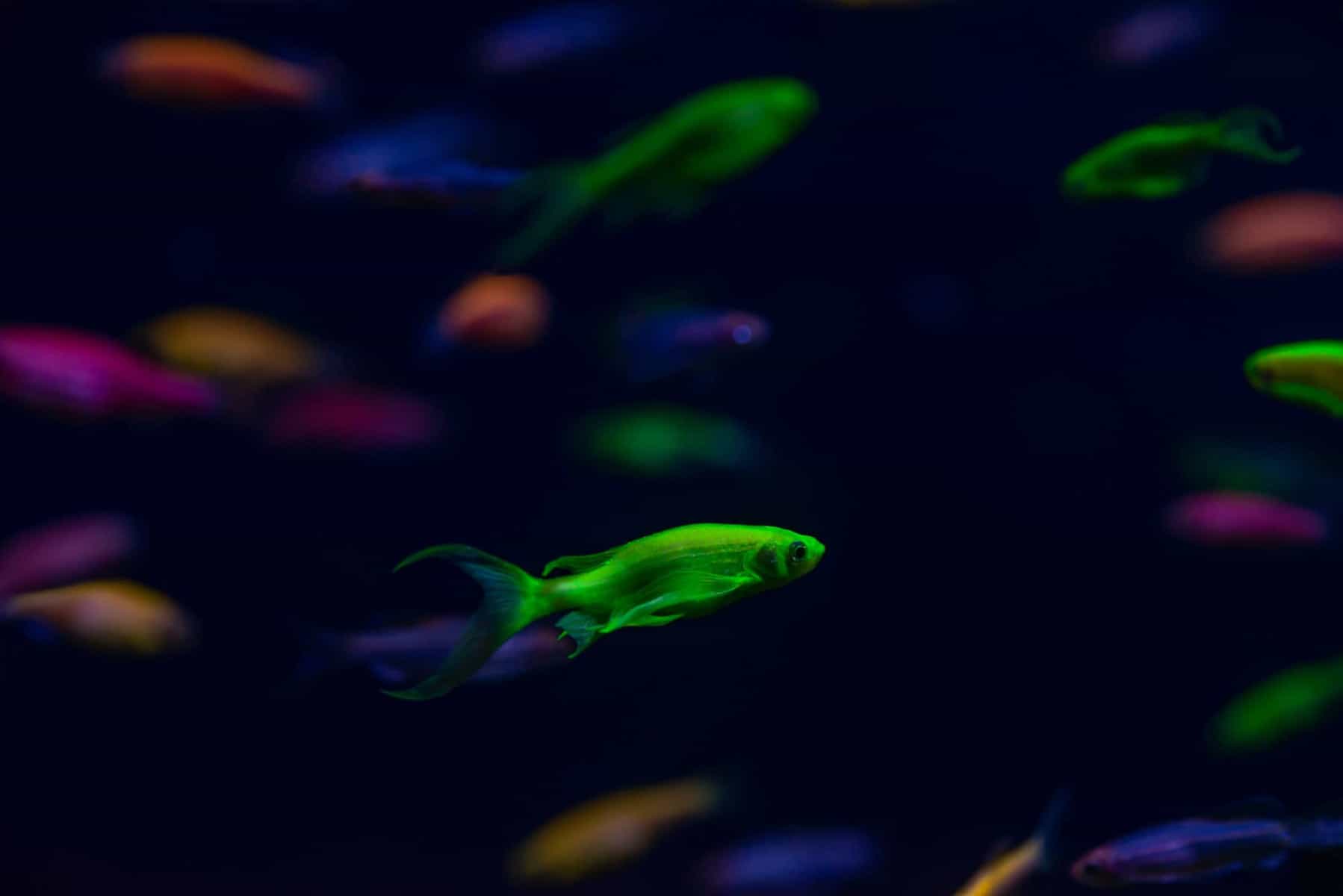 Betta fish are recent additions to the list of available glofish. Genetically modifying a betta to make them fluorescent elevates them to the status of glofish. While other glofish can come in a variety of vibrant colors, right now, the betta only shows electric green.

What Is a Glofish?

A glofish is a genetically engineered fish that literally glows. A fluorescent protein gene causes their glow, which can be a variety of colors. The gene only alters the appearance of their skin and has no ill effects on their other bodily systems.

The first experiments on making fish fluorescent had the eventual goal of detecting toxins or pollutants in water. The idea was to engineer a fish that could light up once it entered an unhealthy waterway.

However, permanently glowing fish became popular as pets, which led to the glofish industry. Glofish are bred in captivity, as fluorescence in the wild can quickly get them eaten.

Depending on the type of fish, they can have one of several fluorescent colors or be limited to just one shade.

Some glofish hues include:

What Kind of Fish Can Be Glofish?

Any fish that is genetically altered can potentially become a glofish; all they need is a fluorescent gene. Below is a list of fish that are popular as glofish:

Can Bettas and Glofish Coexist? 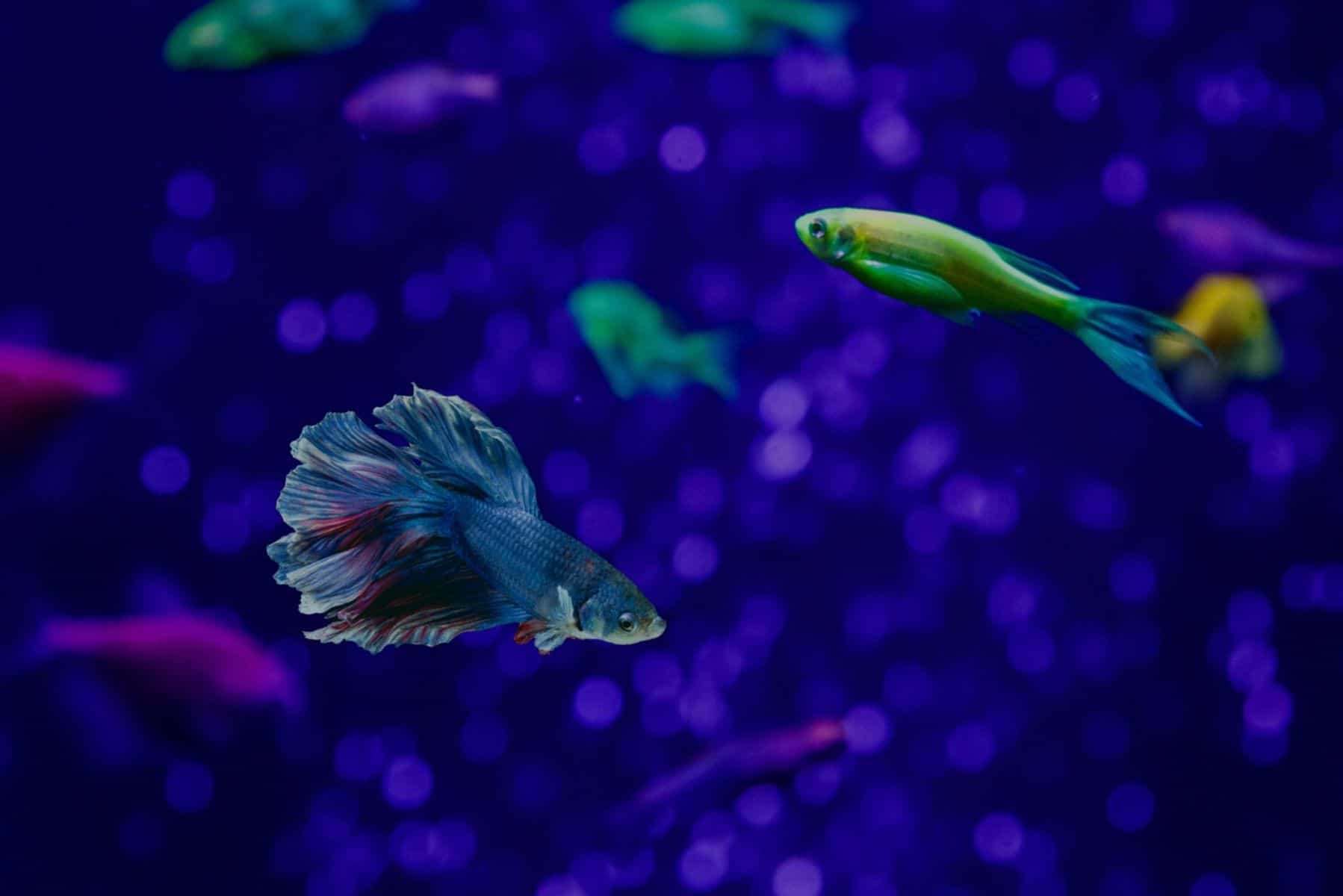 Betta fish can usually get along with other fish that aren’t territorial and have similar needs like water temperature.

So, they can generally coexist with other glofish peacefully. However, some betta fish can have cranky personalities that cause them to nip their tank mates.

The same is true for other glofish, so if you have a feisty school of fluorescent Barbs, you might not want to introduce them to your new betta fish.

Is It Possible for a Female Betta Fish to Eat a Glofish?

A female betta won’t eat a glofish. However, if the tank environment is poor and the female betta is starving, she may nip at the long fins of a glofish.

For this reason, it’s generally not recommended to keep female bettas and glofish together in the same tank. If you do, provide plenty of hiding places and cave-like structures for the betta to retreat to.

Can I Give My Betta Glofish Food?

You can give betta’s glofish food if you run out of betta food, but eventually, you’ll need to get more betta food.

The reason being is that glofish food doesn’t have all of the nutrients that bettas need. It’s fine as an emergency food source, but don’t make a habit of feeding your betta glofish food on a regular basis.

Can I House Female Betta Fish with Glofish?

You can house female betta fish with glofish, but it’s essential to provide them with plenty of hiding spots and places to retreat. We recommend a tank size of 10 gallons or more for this purpose.

Is It Possible for Glofish to Breed with a Typical Betta Fish?

There is no exact answer to this question. However, I don’t recommend doing so as it can lead to some genetic defects in their offspring.

In fact, there is no telling what glofish offspring might be like since no one has performed any experiments in controlled environments.

However, we do know that mating glofish from a different species with typical representatives from the same species have a high chance of causing genetic abnormalities.

In addition, breeding glofish betta is against the rules set by the International Betta Congress. You are not allowed to reproduce them on purpose and then sell them to other people.

This is because glofish bettas are a unique breed of fish that is the creation and property of glofish LLC. They’re made by Segrest Farms and 5-D Tropical, who market them on behalf of the now-defunct company.

When it comes to the second issue, you may be wondering, “How can people get glofish bettas if they’re not permitted to breed or sell them?” Well, you can buy them through authorized channels that are allowed to collaborate and distribute Glofish LLC products.

Once you acquire them, you can only keep and breed them as decorative fish. There will be no breeding or commercial trade. Unless, of course, the company decides to lift the breeding ban in the future.

If you’re looking into bright or fantastically colored fish, glofish or betta’s are the way to go. Betta fish are vibrant, with beautiful fin variations and countless patterns. Glofish are fluorescent due to genetic engineering and can give off brilliant shades in dark light. They can overlap or even coexist provided they have the correct temperament and tank conditions.

If you’re looking for a pet fish that’s a little more exciting than a standard goldfish, there are plenty of fantastic and eye-catching specimens from which to choose. In a completely biased opinion, two of the most splendid kinds of freshwater fish are the Betta fish and Glofish.