We see animals of all types with albinism – and they’re all absolutely stunning! But when was the last time you saw an albino betta fish?

Probably not very recently, right… if ever?

Well, this could be for a very good reason; it’s not that they don’t exist – They’re just super, super rare!

Can Betta Fish Be Albino?

It is totally possible for an albino betta fish to exist!

That being said, this is incredibly uncommon, and there have been many unsuccessful attempts to breed a line of albino bettas.

This could be why you’ve never seen one and are unsure whether or not they exist, and I don’t blame you. Before I decided to look into it, I’d never even seen a picture of an albino betta fish, let alone one in real life!

White is one of the more unusual betta colors you can sometimes find in aquatics stores.

As most people generally prefer a betta with bright, vibrant colors, an all-white fish can sometimes be difficult to find. But this doesn’t mean they’re rare.

They’re available to buy online, from specialist breeders, and sometimes in specialist stores.

If you’re considering buying one, just make sure that, as with the purchase of any live creature, you do your research into the breeder/company selling it.

These all-white bettas are extremely beautiful, but it must be noted that these are not true albino bettas. They can be differentiated by the tone of their scales and their eyes.

What Is the Rarest Color Betta Fish?

When we think of a typical betta, most people imagine a blue and red fish with long swishy fins and a tail.

This is arguably the most common type of betta fish, and though they commonly come in a variety of colors, there are some that are super rare!

Not only is the albino betta fish almost non-existent, but purple bettas are also one of the rarest. This color is astonishingly beautiful, yet almost impossible to find.

If you come across a purple betta, then you’re in luck, as these could be worth a fortune!

Green bettas are so rare they don’t even exist – let me explain. Bettas that are a true green color don’t exist. If you find a betta that appears green, it’s likely to be turquoise; still difficult to find, and still extremely beautiful!

How Do I Know if My Betta Is Albino? 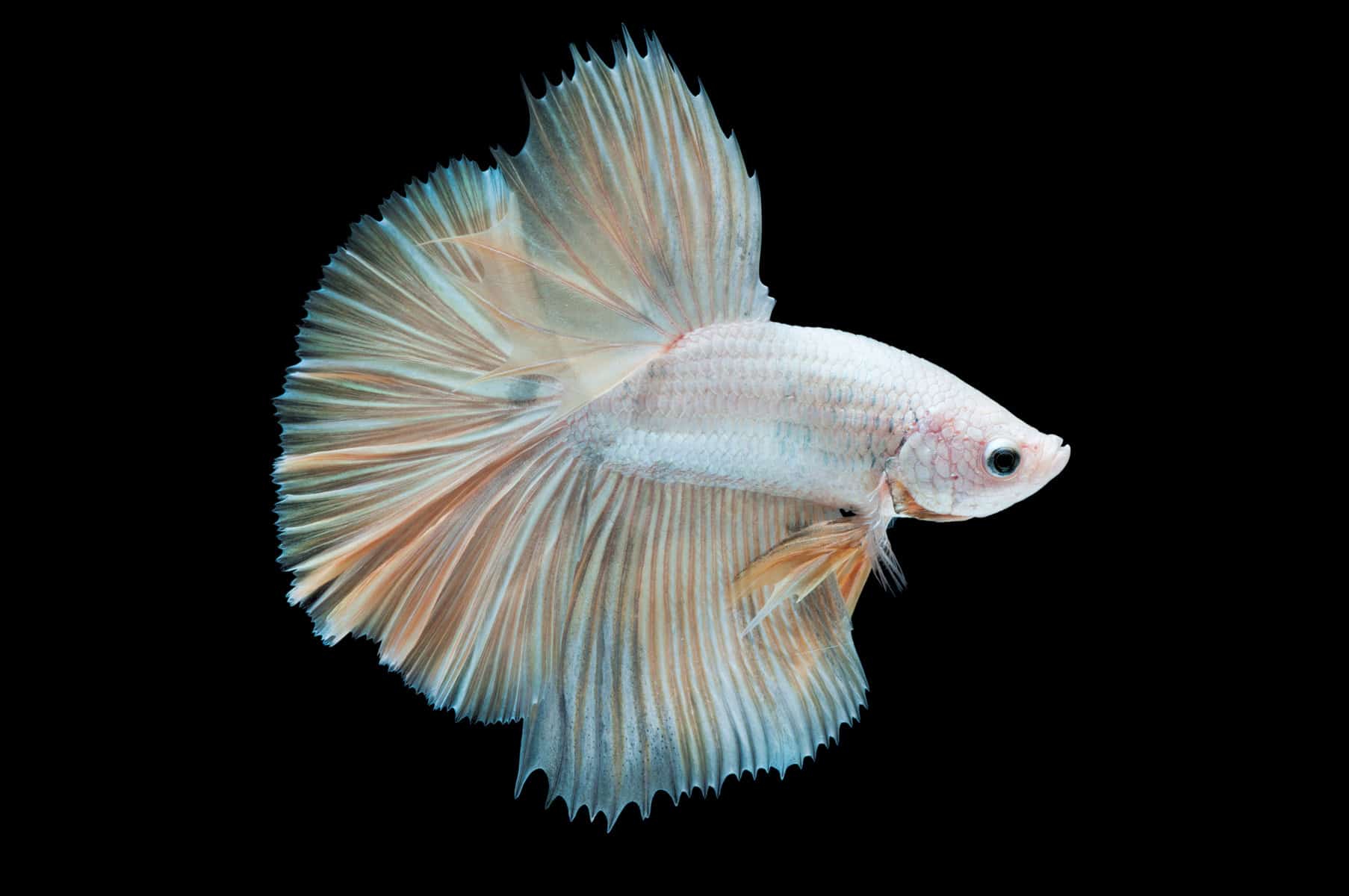 You can tell if a betta fish is albino by a couple of factors.

Whilst initially, you may assume this would make an albino betta fish appear white, the lack of pigmentation in their scales often makes them appear somewhat pink-tinted due to their translucent body.

Though these must not be confused with pink bettas! (Yep, they’re a thing too!)

Their eyes will also lack pigment, meaning they will appear as pink or red.

On top of this, an albino betta is likely to come with many health issues, such as skin cancer and blindness, and sadly, it’s very unlikely to reach adulthood.

If your betta is white, with dark eyes, in good health, and has made it to a fully grown adult, it’s likely just a rare color betta.

If your betta is slowly beginning to turn white, this is not albinism and can be a sign of sickness or ill health. Should this be happening to your fish, consult a professional immediately!

Can I Buy an Albino Betta Fish?

As someone into aquatics, you might also know a little about the reptile trade – if so, you’ll likely be aware that animals with albinism are more expensive to trade.

The world’s most expensive ball python was an albino, and sold for a whopping $40,000!

An albino betta fish obviously won’t cost you that much, but do keep in mind that due to their rarity and the fact they cannot be bred, they will likely be at a much higher price point than the more common varieties of betta.

If you’re considering purchasing one, there are a couple of things to keep in mind:

So, theoretically, it’s possible to buy an albino betta fish, but it certainly isn’t advisable unless you’re an expert in aquatic care.

Seeing a pet you’ve paid so much money for suffering from ill health and dying prematurely can be upsetting, so if you’re in the market for a rare betta, it’s best to look for one that’s known to have better health and longevity.

They’re also so rare that getting your hands on one may be near impossible. You could spend years upon years searching for one, such that it may not actually be worth it.

As we discussed, albino bettas have quite bad health issues and rarely reach adulthood.

They’re prone to blindness, deafness, and cancer and can be born with various other mutilations or disabilities.

As it seems, they’re also infertile and cannot be bred, explaining why attempts to line breed albino bettas have failed.

A recessive gene causes albinism in any species. This means that both parents must carry the mutated gene which causes albinism, so if they were not infertile, two albino bettas would be able to produce albino offspring.

Sadly, they are infertile, this explains why albino bettas are so rare.

Due to their shortened lifespan, increased sensitivities, and ill health, albino betta fish require specialist care and attention whenever they appear in captivity.

With the lack of pigmentation and melanin in their skin, exposure to excessive UV rays can lead to issues such as skin cancer. This is one of the reasons albino bettas die so quickly, both in captivity and in the wild.

For this reason, the lighting in the tank must be very limited, so they should not be housed with other bettas as they will require different light levels.

Other than this, and the regular care you should give any betta, special attention should be paid to their diet to ensure that they are eating highly nutritious meals to help them stay in the best health possible.

Close attention should also be paid to their general health. A professional should address any apparent changes immediately to help give the albino betta the best quality of life.

In short, the albino betta is a beautiful fish. Although often thought to be almost non-existent, they have been found in captivity, but sadly, due to many health issues, they cannot be bred.

If ever you come across this fish, consider yourself very lucky! And be sure to let it know how unique, beautiful and precious it is!