Male Betta splendens are notoriously ferocious fish. Their other common name, ‘Siamese fighting fish,’ is derived from their tendency to rip another male to shreds given half a chance.

Yet, you may be relieved to know that there are a few tank mates that may still be suitable to live alongside your betta – depending on his temperament!

Some betta fish will try to kill just about any other creature living in the same tank, including a pleco, but a fatality is highly unlikely and certainly avoidable. For the most part, plecos are known to make fine tankmates for most bettas.

First of All, What Exactly Is a Pleco?

Plecos, or plecostomus, are a family of algae-eating species of catfish, mostly from the rivers of Central and South America.

They tend to dwell at the bottom of the tank, sometimes also climbing up the glass with their suckering mouth to graze off algae growing there. Aquarists tend to keep plecos primarily for this wonderful tank cleaning service that they offer!

There are around 150 species of pleco in the world and not all of them will make good tankmates for your betta! The common plecostomus, for example, can grow up to two feet long. Which is far too large for the smaller tanks normally associated with bettas.

For the purposes of this article, when we’re talking about plecos, we mean the smaller species such as the Pit Bull pleco, Clown pleco, Rubber-Lipped pleco, or Bristlenose pleco.

Plecos can be beautiful fish in their own right though, with some species even boasting bright colors and elaborate markings.

Why Do Plecos Make Good Tankmates for Betta Fish?

While bettas can be aggressive tankmates, there are many good reasons that plecos are often kept with betta fish.

One of the reasons plecos rank highly among fish species to keep with bettas is that they occupy a very different layer of the water.

Bettas are surface dwellers that like to hang out at the upper levels of the tank, where they breathe from the surface of the water.

Plecos, on the other hand, spend nearly all their time in the lower reaches of the aquarium, where they graze on algae and gobble up almost anything that falls to the bottom of the tank.

This difference in the layers they occupy means these species will seldom come into contact with one another, making conflict very unlikely.

The pleco species that we’ve recommended here are all algae-loving fish, who will obtain the majority of their nutrition from grazing algae in the tank, or algae wafers if the tank isn’t already blessed with an abundance of algae!

Bettas on the other hand are primarily carnivorous and love to eat blood worms, daphnia, and brine shrimp. The lack of competition for similar food, therefore, diminishes the chances of dangerous conflicts or tensions building up around feeding time. 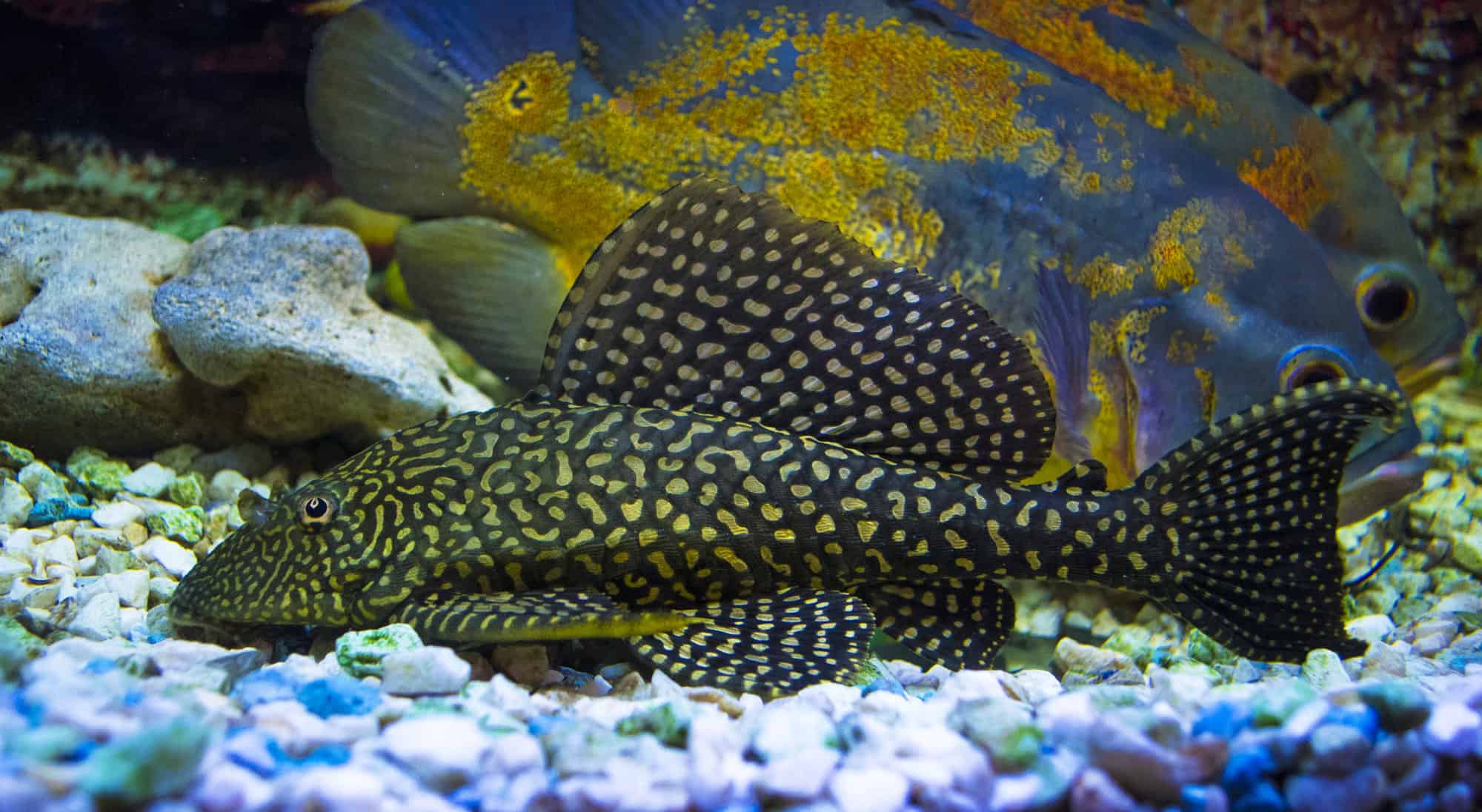 Plecos, even big ones, are very peaceful fish who seem to hardly notice the presence of other species. So, you can rest easy when you turn out your tank’s lights at night, your betta will be safe.

Plecos Are Well-Camouflaged and Well-Armored

Plecos are built like well-camouflaged war tanks! Most pleco species are brownish in color and blend in among the rocks and substrate of the aquarium so well that it may even be difficult for you to spot them!

Bettas are therefore also unlikely to see much of them, let alone swim all the way down to the bottom of the tank to give them a hard time.

A pleco’s upper body is also covered with tough, bony plates, whereas its tender belly is almost always hugging whatever the pleco is feeding on. These formidable natural defenses make it very difficult for a nip or two to inflict any significant damage, even if your betta did try to attack your pleco.

Bettas like good quality, clean water with a pH between 6.5 – 8. Plecos also favor these water conditions, so the two species are highly compatible when it comes to this.

In terms of temperature, bettas do prefer warmer water than many other aquarium fish, with 78-80 degrees Fahrenheit being the optimal range.

The enormous appeal of the plecostomus is that it does a stellar job of keeping your tank clean!

From your driftwood and granite decor to the glass that you look through, plecos spend night and day hoovering up algae so you don’t have to!

When you can see your betta’s glorious displays through crystal glass, you’ll be glad you got your pleco.

Plecos Add Interest to the Tank, for You and Your Betta

Bettas are fascinating fish, but a lonely betta kept in a tank without any company may not keep you engaged enough to be a truly great fishkeeper.

Adding another fish brings diversity to your tank, and plecos can be beautiful and engaging in their own right once you come to appreciate them.

The possibility of peaceful interaction between species brings interest and stimulation to both you and your betta.

While there are many great reasons why plecos make good tankmates for bettas, there are a few potential drawbacks to consider as well.

Plecos Prefer a Different Level of Water Current to Bettas

Whereas bettas are from the still, tranquil pools and rice paddies of South East Asia, plecos tend to hail from rivers and streams of South and Central America.

Plecos are therefore adapted to require faster flowing water than bettas, which can create a compatibility problem for the two species.

Luckily plecos and bettas inhabit different levels of the aquarium’s water strata, so the problem can be overcome by localizing the current with a filter.

Make sure that your filter’s outlet is pointing towards the bottom of the tank, where the pleco can enjoy the increased flow.

This should leave the upper water layers of the tank relatively calm, and still be suitable for your betta – especially with a few plants around to break up the current’s flow.

Check out our guide to good filters for a betta tank here.

Not All Pleco Species Are Suitable Companions for a Betta

As we discussed earlier, in a small aquarium only the smallest species of pleco are suitable companions for a betta. A two-foot-long common plecostomus wouldn’t have room to turn around, even in a 30-gallon tank!

Also, some species of pleco, such as Zebra plecos, are not so keen on algae but prefer the same kinds of high-protein foods that bettas do. This increases the chances of competition and conflict during feeding time.

Lastly, certain forms of pleco have been bred to be brightly colored. Bristlenose plecos are typically brown, but bright yellow or reddish varieties are also available.

Choose a pleco that is well suited to live alongside your betta. This means a plain-colored, algae-eating species that doesn’t exceed six inches.

Not All Bettas Make Suitable Companions for a Pleco

While plecos are among the better choices of tankmate for your betta, some male bettas are just too aggressive and will try to attack anything that moves. 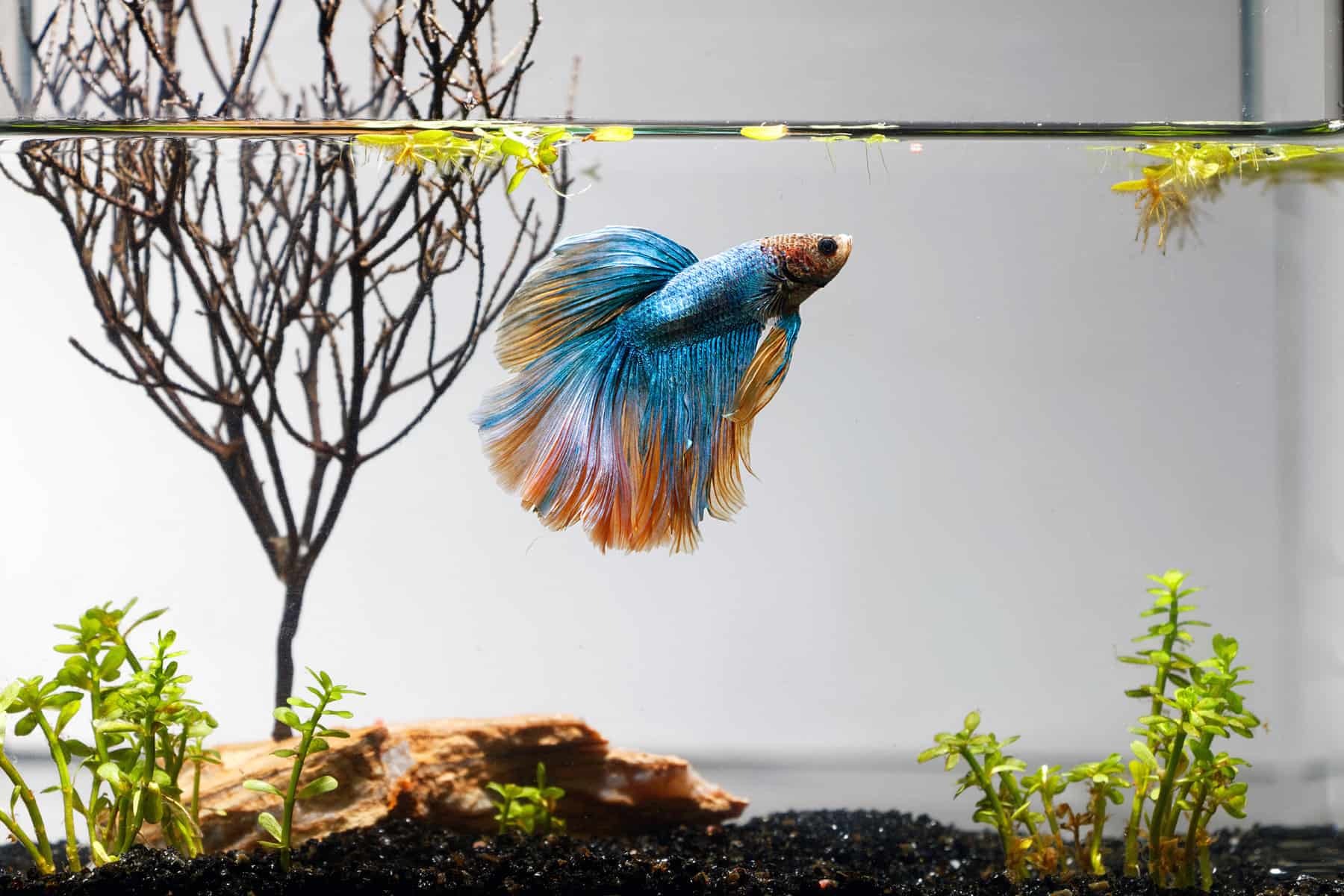 Most bettas will hardly notice a pleco lurking at the bottom of their tank, but a few individuals desperate for a tussle may even swim to the bottom of the tank to pick a fight with your poor pleco.

This way you’ll get a good feel for his temperament and be able to judge which tank mates might be suitable for him.

Before introducing a pleco, try adding a few robust snails to your tank to see how your betta will react. If he can live peacefully with the snails, chances are he won’t upset your pleco either.

Always add new fish in a darkened environment, allowing them a full night to get settled into their new surroundings before any risk of daytime conflicts can come about.

Another wise strategy to guard against confrontations is to allow your pleco plenty of places to hide.

Plecos are often quite nocturnal by nature and may enjoy resting for much of the day within the confines of a cave at the bottom of the tank. A well-hidden, happy pleco is very unlikely to get disturbed by your betta.

Finally, if you’ve had successive bad experiences with bettas attacking fellow tank members, consider buying a larger tank. Although 10 gallons is adequate for a single betta, a 25-gallon tank or larger is much better if you wish to also house other fish like plecostomus.

The Ultimate Solution: Get Your Tank Setup Right Before Things Go Wrong

The best solution to most of the problems that can arise in the aquarium lies in getting the setup right in the first place.

Creating a really happy and healthy environment for your fish will minimize stress, and therefore make chances of serious conflict much less likely to happen.

A large enough tank with good water quality, the right temperature, and proper feeding are all essential components for the long-term well-being of your fish.

Read our complete guide to setting up the perfect betta tank here!

Plecos are mysterious fish! Although they hardly seem to notice the presence of other fish species, they can be quite hostile to members of their own tribe. Therefore, it’s advised not to keep more than one plecostomus in a single tank.

Plecos are also masters of escape! In their native lands, they have adapted to wriggle across dry land from one stream to another if they need to.

If you see your pleco coming to the surface for gulps of air, it may mean she’s planning her escape! Plecos store air in their bellies before land crossings to give them enough oxygen to survive the journey.

If you witness this behavior, be sure to keep the tank’s lid on tight, and consider what may be causing your pleco’s wish to leave the tank for somewhere new.

Plecos and bettas normally make peaceful tankmates for one another. In the unlikely event that your betta does become aggressive towards your pleco, its thick skin and instinct to hide should guard your pleco against any substantial injury or fatality.

With the right tank setup and the pointers suggested here, you shouldn’t have too much trouble accommodating both of these fascinating fish together in relative harmony.