Although bettas are pretty hardy fish when given their preferred aquarium water parameters, kept in a clean tank, and fed a high-quality diet, they are occasionally affected by some of the most common diseases.

Fortunately for you and your betta buddy, an over-the-counter medication from your local fish store, an online vendor, or a veterinarian is a great sick fish remedy if they fall ill with one of the aforementioned diseases. Tetracycline is often the treatment of choice for your ailing aquarium fish. But what is it? Is it safe, and what conditions does the drug treat?

Read this comprehensive guide to find out all you need to know about tetracycline for betta fish!

The tetracycline group of drugs is a broad-spectrum antibiotic that’s derived from various soil bacteria, including Streptomyces aureofaciens, and was first discovered in the 1940s. In 2005, a new subgroup of tetracyclines was developed for use in treating infections that don’t respond to regular tetracyclines.

Note: Tetracyclines can be safely used with methylene blue. 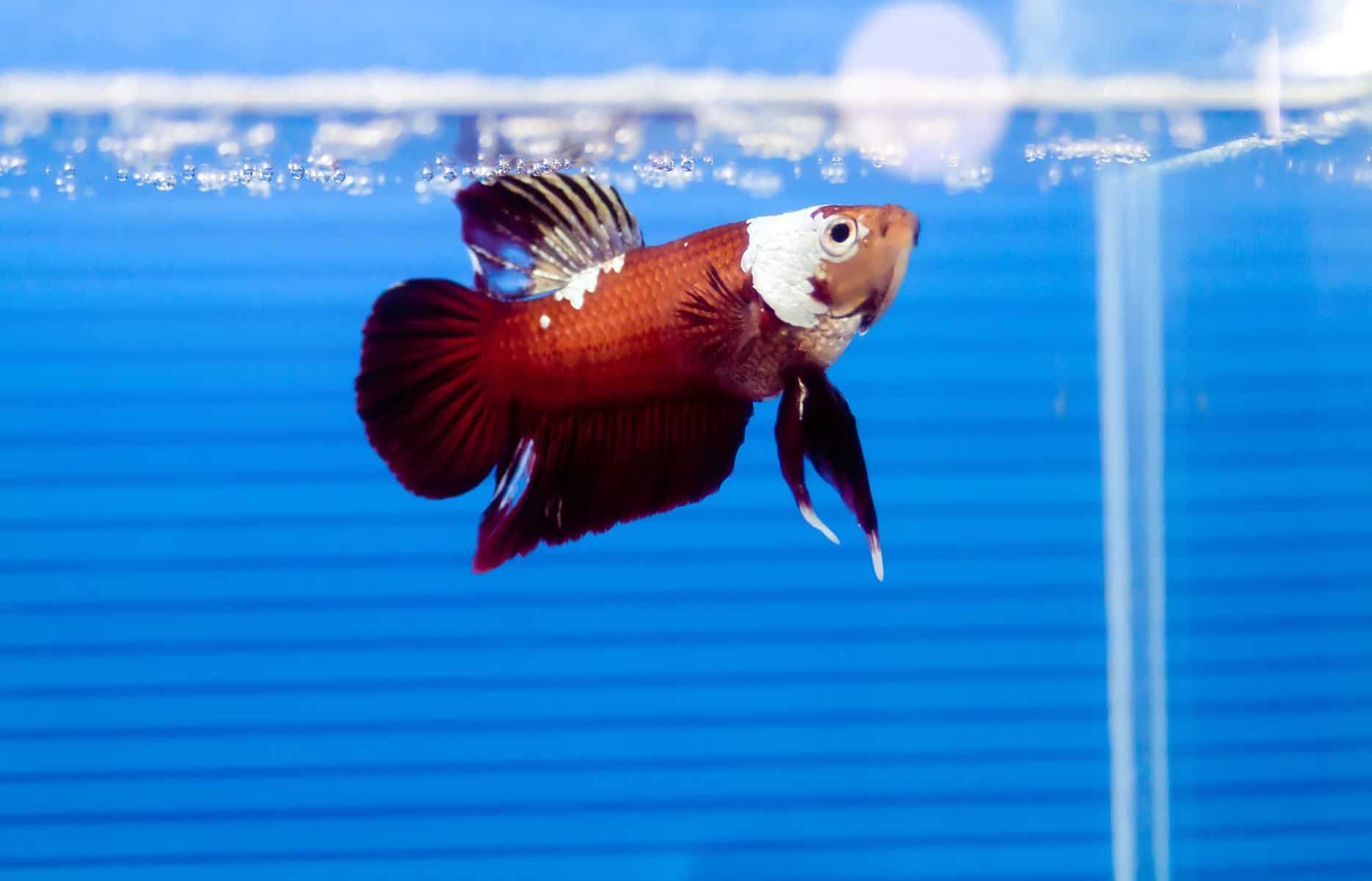 Tetracyclines are effective antibiotics for treating various internal and external bacterial infections that might affect your betta fish. These include:

Hemorrhagic septicemia is a bacterial infection that affects the fish’s bloodstream. Symptoms typically include red, bloody streaks in the fins and on the body.

This bacterial infection presents as cottony growths and erosion of the fish’s mouth.

Fin rot is very common in betta fish, especially when they’re stressed or kept in unsuitable tank conditions with poor water quality. Fin and tail damage include frays and raggedness, and in severe cases, the fins and tail rot away completely, leaving only bloody stumps behind.

When the fish’s gills are attacked by bacterial infection, they become inflamed and bright red. Fish with this condition struggle to breathe normally and can suffocate if left untreated.

Fish that have sustained a traumatic injury often develop a secondary bacterial infection that causes red patches and ulcers on the body and face.

Healthy fish produce body mucus or slime as a natural defense against parasites. However, there’s also a bacterial condition that causes greyish slimy patches to develop on the fish’s body.

Infected fish flick or “flash” against the substrate and other solid objects in the tank in an attempt to relieve the irritation that’s caused by the bacteria. Your betta’s respiration rate will also be rapid.

The eyes of a betta with pop-eye protrude and can also become cloudy. The condition usually affects only one eye and often develops as a secondary bacterial infection simultaneously in fish that are already sick or have suffered some sort of eye trauma.

Cyanobacteria is blue-green algae that can infect aquariums, but luckily, tetracyclines can be used to treat it.

What bacteria is tetracycline effective against?

Tetracycline is generally an effective treatment for aerobic bacteria, especially gram-positive organisms. If the infection is caused by aerobic gram-negative bacteria, the drug of choice is minocycline.

One major downside of tetracycline is that it also kills nitrifying bacteria. So, if you’re treating your fish with the antibiotic, you need to avoid using other antibiotics simultaneously, as that will have a big negative impact on biological filters.

So, if you’re using tetracycline to treat the betta fish in your main tank, test and monitor water chemistry frequently for a few weeks after you’ve finished using the medication, and watch out for ammonia and nitrite spikes.

For that reason, we recommend you transfer your betta to a hospital tank for the duration of treatment and carry out partial water changes daily to keep the environment as sanitary as possible.

When is tetracycline not effective?

Bettas generally prefer to live in softer water with a pH that’s close to or slightly under neutral.

However, it’s worth noting that high water hardness (GH) can reduce the effectiveness of tetracycline, and in tanks where the pH is higher than 7.5, the drug is completely ineffective.

If you have a carbon filter in your tank, you’ll need to remove that when you’re using tetracycline, or the carbon will absorb the drug, rendering it ineffective. That’s another reason to transfer your betta to a separate hospital tank (that means no tank mates allowed!) that doesn’t have a chemical filter cartridge when you’re treating it with tetracycline.

How does tetracycline work?

Tetracycline is absorbed into the betta’s bloodstream, where it’s distributed around the body’s tissues and vital organs.

The drug is expelled from the betta’s body via its kidneys, however, if repeated doses are used or the tetracycline treatment continues over a long period of time, the accumulation of the drug can cause kidney problems. Since the drug goes through the kidneys to be removed, it’s not recommended for use in fish that have impaired kidney function, like in cases of dropsy, for example.

Tetracycline is generally not recommended for the treatment of very serious ulcers or bleeding, largely because the drug has been shown to cause anemia in fish, which may only exacerbate the problem. Tetracycline can also lower the red blood cell count, so if you have a fish that’s badly injured, you may need to look into a safer drug.

Tetracycline becomes toxic once it reaches its expiry date. So, if you don’t use the entire contents of the bottle of the antibiotic drug during the course of your betta’s treatment, be sure to throw out what’s left so you don’t accidentally poison your beloved fish.

Although this doesn’t apply to freshwater bettas, it’s worth noting that you can’t use tetracycline in marine aquariums. That’s because the calcium contained in the saltwater absorbs the drug, rendering it useless.

Tetracycline can be used to treat several internal and external bacterial infections in bettas and other freshwater tropical fish species.

Remember: you shouldn’t use this drug to treat bettas with dropsy or kidney disease that’s onset for some other reason, and it should only be used in freshwater aquariums.