The platy and the betta are probably two of the most well-known freshwater species in the aquarium hobby. They both come in spectacular colors and can bring life to smaller fish tank setups.
The platy is known for its active and social behavior while the betta fish is one of the most aggressive and solitary species available. That certainly means they can’t go together as tank mates in a community setting, right? Well, you’d be surprised.
Keep reading to find out if you can keep a betta with platies, how to set up a platy and betta fish tank, and warning signs that the pair isn’t working out! 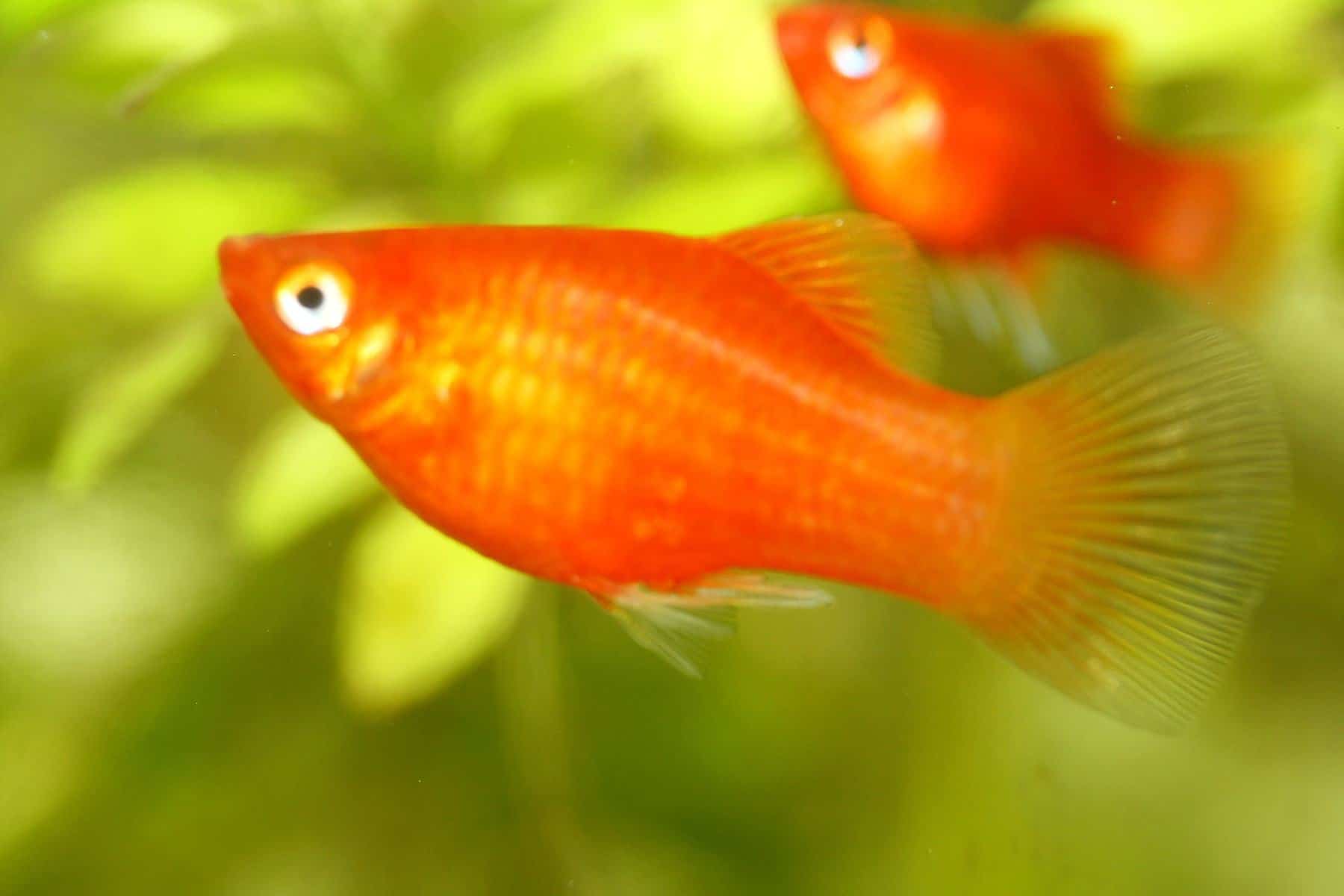 If you’ve been to an aquarium store before, you’ve most likely seen a platy.

These Central American fish come in an assortment of colors and can usually be seen swimming throughout all parts of the tank. They come in almost every color but are most common in reds, oranges, and yellows.

Care for these fish is relatively easy. While they stay under 2 inches (5.1 cm) when fully grown, they are very active and have a high bioload for their size.

Platy fish do best in at least 20 gallons (75.7 L) and small groups; it’s important to have at least two to three females to every male as males can be incredibly persistent.

Platies are some of the most friendly freshwater fish, but some people have had problems with them surprisingly.

Most often, this aggression is between males and females and happens when there are not enough females in the tank; the male will constantly chase after the female in attempts to mate, which can easily be mistaken for true aggressive behavior.

Some hobbyists have had problems with platy fish being aggressive towards other fish, though this is very unlikely. If you have particularly active or bold platy, this can disrupt slower species and even lead to fin-nipping.

Can platy fish live with a betta?

In short, it is very likely that you can keep platy fish with your betta. However, it entirely depends on your tank setup and the personality of your fish.

How to keep platies with betta fish

Many hobbyists have had success with keeping platies with their bettas, while others have had no luck at all. What are some ways of increasing your chances of having a successful pairing with these two species?

You will need to consider the minimum tank size and setup, overlapping water parameters, and tank maintenance.

As mentioned before, platies are active and social fish in the aquarium. They like to be in small groups of several females and a couple of males.

On the other hand, betta fish are solitary and can be quite lazy; they like to float around all levels of the aquarium, but can sometimes be seen resting on leaves or other hides.

Because of this difference in activity, platies need to be given enough space to explore while bettas need their own room to relax. It is generally agreed that 20 gallons (75.7 L) is the bare minimum for keeping these two species together.

Both platy fish and betta fish will enjoy an aquarium with live plants, but as long there are areas for your fish to escape to for shelter, then you may also use artificial plants and hides. Providing plenty of areas to hide can also help diminish possible aggression between the two species.

A sand or gravel substrate will work, though make sure that whatever you choose won’t scratch the fins or belly of your betta!

Before bringing your platies home from the pet store, ask what water temperature they are being kept in. If the answer is several degrees lower than the optimal betta range, then it would be best to allow for a longer acclimation period.

If you already have your platies and want to bring home a betta, then slowly begin to raise the water temperature one degree every few days until you are in the preferred range for bettas; it’s better to take this process slow than to rush it as the fish need to adapt.

While not completely necessary, it is strongly recommended to use a filter if keeping betta fish and platies together; platies are very messy for their size and a filter will provide additional room for beneficial bacteria to grow and process that waste.

Healthy water parameters will be 0 ppm ammonia, 0 ppm nitrite, and manageable nitrates (<40 ppm). Both species like a relatively neutral pH between 6.5-7.5.

Because platy fish can be messy, it’s important to keep up on tank maintenance.

Regular water changes should be scheduled on a weekly or biweekly basis to help keep the tank clean. How much water needs to be exchanged will depend on the overall nutrient import and export of your tank.

It is generally recommended to perform a 10-25% water change every week or every other week to keep nutrients in check.

Otherwise, filter media should be changed as recommended. If using a sponge filter, it is also recommended to squeeze it out with every water change; only squeeze out your sponge filter in used tank water as running it under tap water will kill off beneficial bacteria.

All algae should be siphoned off/removed by hand as needed; water parameters should indicate the source of the algae–usually a sign of high nitrates and/or phosphates–though a new tank will usually go through an ugly stage as well.

Feeding your betta and platies

A problem arises when trying to feed your betta and platies. Both are surface eaters, though platies tend to be much faster eaters than betta fish.

There is no simple solution to this, and you will need to find what works best for your fish. There are some options you have to making feeding times easier though.

One solution is that you could offer different food options. Platy fish will venture away from the top of the tank for food while betta fish will usually stay near the water surface; perhaps try getting a sinking food for the platies and keeping your betta on food that floats for longer.

Another method that you could try is feeding more often as long as tank maintenance is kept up with. Feeding more often will ensure that all your fish are getting enough food, but this also means that your fish will start to create more waste and that more food will be left uneaten in the aquarium.

With this method, you will need to be more aware of leftover food and remove it as needed. You will also want to analyze how increased feedings affect water parameters and adjust your maintenance schedule.

If you find that your betta fish is bullying your platies for food, continue to monitor aggression as this could turn into something more.

Why did your betta fish suddenly become aggressive to your other fish?

It should be said that even if your betta is initially accepting of other fish, this could change at any given moment.

While many hobbyists have had success with this pairing, a good percentage of them have had the experience of their betta fish turning aggressive.

Usually, there are no warning signs and then one day, your betta fish is chasing after the other fish in the tank and causing distress. There is no simple reason why this happens, it just does.

However, you can lessen the possibility of this happening by picking fish that will upset your betta fish the least. It is best to avoid fish that could resemble a betta fish. This means staying away from bright colors, flowing fins, and similar body shapes.

If you’re lucky enough to catch this change in behavior from your betta in time, then it is best to remove the fish immediately.

What happens if your platies have babies in your betta tank?

Unless your tank is heavily planted with a sponge filter, there is little to no chance of your baby platies surviving a tank filled with adult platies and a betta fish.

The likelihood of platy fry surviving to adulthood is minimal even if kept in the same tank as their parents. Add a betta fish into that equation, and the chances become that much less.

This is mainly because both fish see the fry as food. The only way to increase your chances of raising your fry to adulthood is by setting up a spawning tank where they are free from predators and a filter that wants to suck them up. 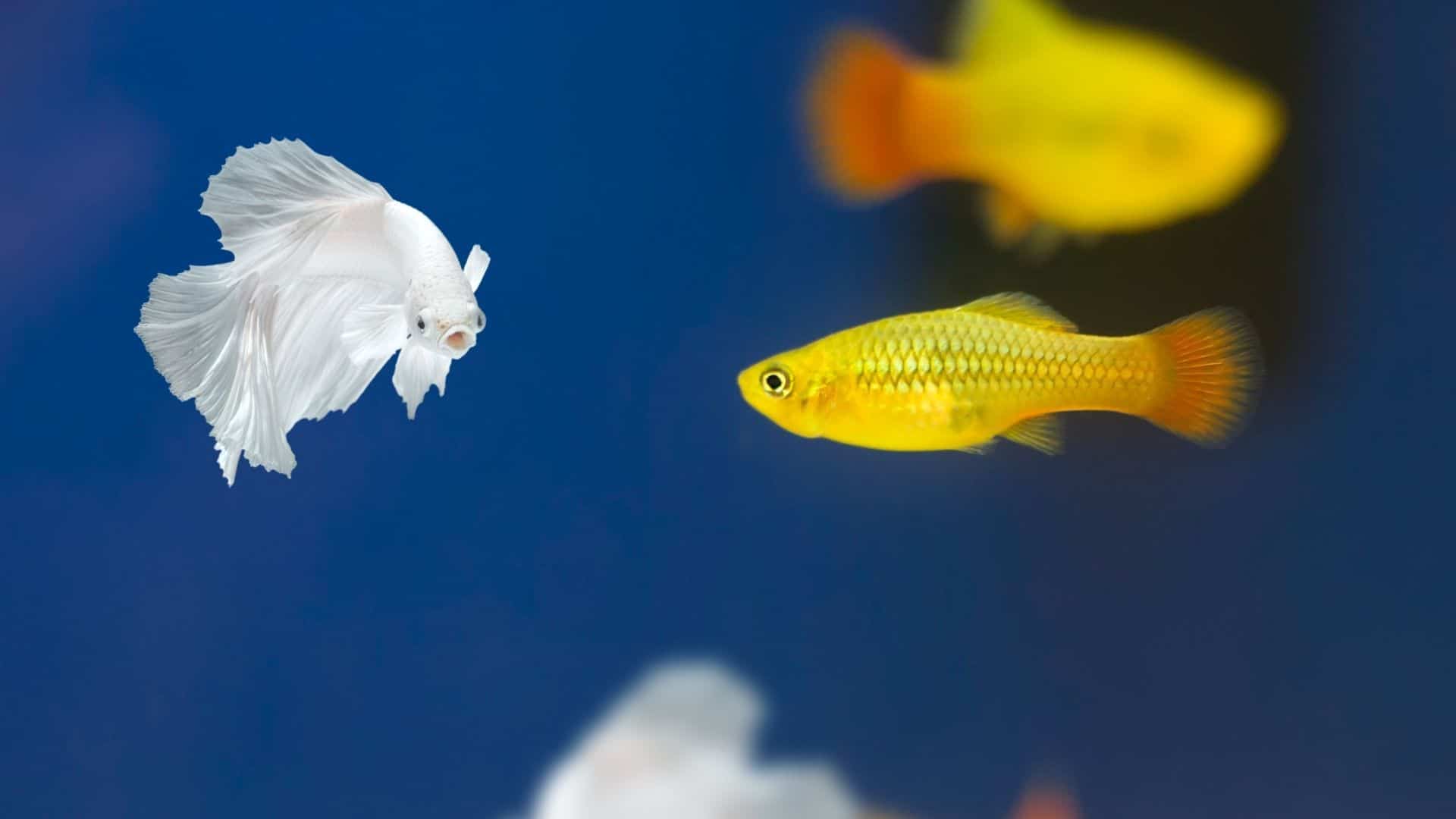 Betta fish are not usually kept with other fish due to their aggression. While this is true for the most part, platies are one of the exceptions that tend to be able to live with betta fish.

Remember that this pairing largely depends on the personality of the betta fish and this combination should not be attempted in anything less than a 20 gallon (75.7 L) aquarium. Provide lots of plants and hides and a betta fish and platy fish tank might work for you.

If you have any questions about platy fish, betta fish, or keeping both of these species together in your own freshwater tank, don’t hesitate to leave a comment below!