You might know you cannot keep two male betta fish in the same tank. Why not?

Well, bettas are also known as Siamese fighting fish, and for good reason. Male bettas are extremely territorial and will fight any other male that enters their space, sometimes to the death. Not only that, but any brightly colored, long-finned fish in the community are also often targets of a male betta’s aggression.

But what about female betta fish? Can two of them live together? In this article, we answer that question and more.

If you’re new to the world of bettas, welcome to an ever-growing group of enthusiasts!

Newbies to betta keeping will need to know how to tell the difference between male and female bettas. After all, you don’t want to accidentally put two males together in the same tank! That’s why you’ve got to know the difference between the boys and the girls, and that’s not as easy as you might think, especially if you buy a baby betta.

Female and male betta fish look almost identical as juveniles. It’s only when the fish begin to mature at around two months old that their gender becomes clear.

Male bettas are famous for their spectacular finnage, especially the tail or caudal fin, which can be up to two or three times longer than the fish’s whole body! Male bettas typically have long ventral and dorsal fins, too.

However, there are types of bettas that don’t have long fins. Plakats, for example, are short-finned bettas with stocky bodies that were specifically bred to be strong and lethal fighters.

In contrast, female betta fish have short fins and lack the flowing tails of their male counterparts.

Another thing that makes male bettas such popular pets is their colors. Thanks to genetics and clever crossbreeding by betta enthusiasts, you can find these fish in just about every color and pattern you can imagine, including black, red, blue, green, pink, gold, chocolate, white, and marble.

There are many variations and combinations of these colors, too, including fish with gorgeous metallic scales that really pack a pop of color to your tank.

Female bettas are generally rather dull when compared to males, being mostly silver, dark gray, and occasionally white. So, if your baby betta has brightly colored scales, it’s most likely a male.

That said, females can become much brighter in color when stressed or during spawning.

Female betta fish have what’s called an ovipositor that’s visible as a tiny white dot next to the fish’s ventral fin close to its head. The ovipositor is used to deposit eggs during spawning, so of course, a male fish won’t have one.

Some juvenile male bettas, however, have a false egg spot. It’s thought that this is used to deter other potentially aggressive males, and it eventually disappears as the fish matures.

Female bettas are typically shorter and thicker-bodied than males, which are comparatively long and thin.

Another way of distinguishing male bettas from females is by observing behavior.

Male bettas are very aggressive when confronted by a perceived intruder in their territory. If you place a mirror next to your betta tank and watch the fish’s reaction, for example, a male will flare his gill covers at his reflection. Some male fish will even attack their reflections.

You generally don’t get that kind of dramatic reaction from females. When confronted with her reflection, a female may flare at first, but she’ll soon lose interest. A male, on the other hand, will keep up the attack until you take the mirror away.

Bettas have what is commonly called a beard. The beard is a membrane that sits underneath the gills and is present in both male and female fish.

The beard is usually brown or black, and males have larger, more obvious beards than females. In fact, the male’s beard can usually be seen all the time, whereas the female’s beard is only visible when her gills are shut.

In the betta fish world, it’s the male fish that are solely responsible for constructing a bubble nest before spawning. So, if your fish starts blowing bubbles in a corner of his tank or underneath floating plants, it’s definitely a boy.

Female bettas do sometimes squabble if they’re in a group. However, a pair of them tend not to fight, provided that one is not a bully.

Betta fish are remarkable creatures that each have a distinct personality. Some are more aggressive than their peers, while others are just plain chilled-out. So, whether or not they’ll fight depends on the personalities of the two females involved.

Besides, there are ways of ensuring harmony within your betta aquarium, starting with choosing a tank that’s big enough for both of them. 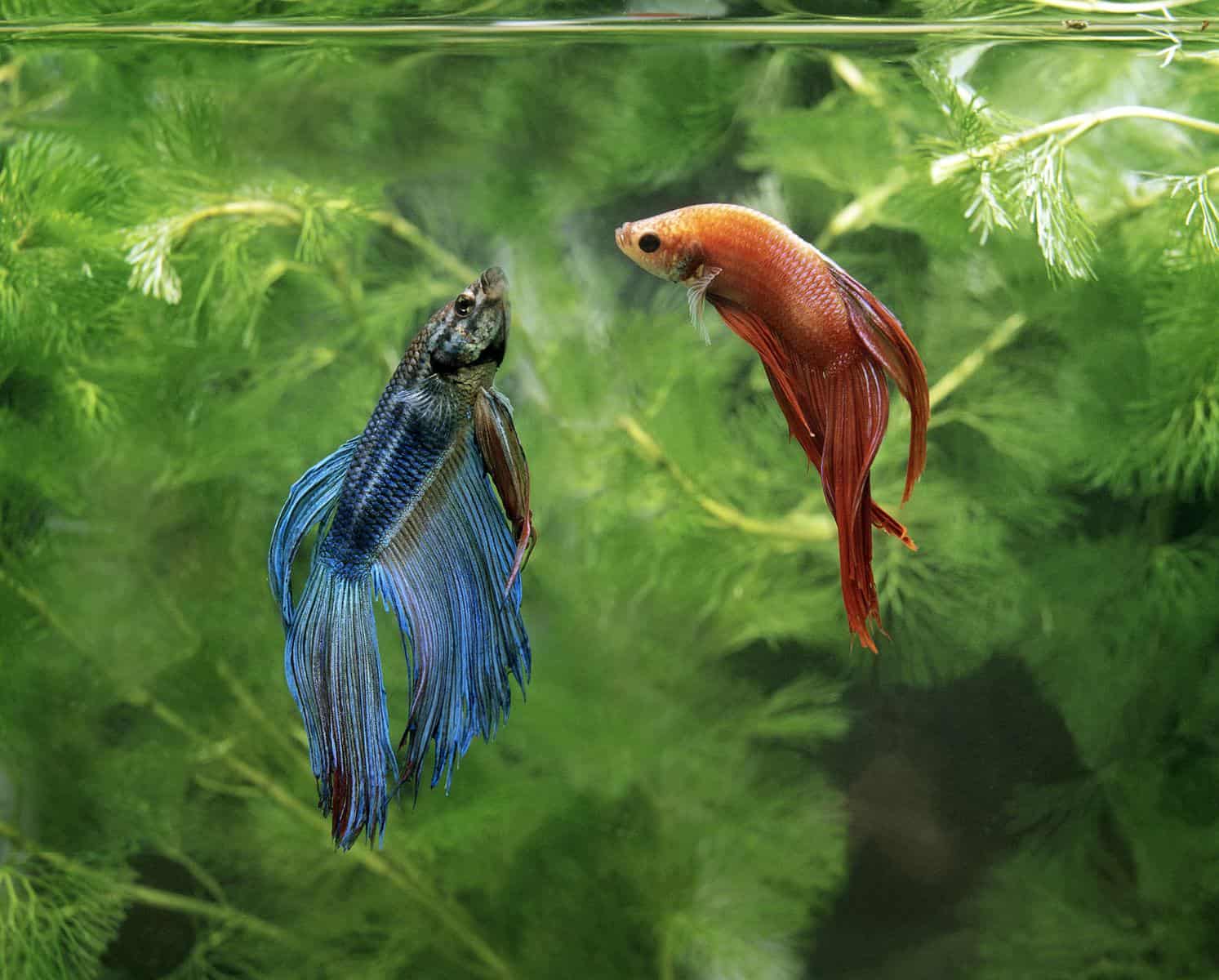 Bettas are not schooling fish by nature, living mainly solitary lives in the wild environment. That said, female bettas can live in small groups, or sororities, relatively peacefully. And two females can often pair up quite happily in the same tank, as long as they have plenty of space.

Ideally, the minimum tank size we would recommend for a group of four to six female bettas is 10 gallons, although two female bettas will do fine in a 5-gallon setup. Female bettas can do well in a peaceful community tank, too, but you’ll need more space if you want to add other tank mates.

The best tank shape for betta fish is a rectangular, shallow aquarium rather than a tall deep one. Bettas spend much of their time in the upper area of the water column, coming to the surface to feed and breathe via their labyrinth organ.

In nature, bettas live in shallow ponds, rice paddies, and marshes, so you need to replicate those places in the captive environment by providing a space that’s not too deep. If the bettas struggle to swim to the surface, they will become stressed and fail to thrive.

Bettas enjoy having somewhere to rest and hide when they want to, so be sure to include lots of dense planting, driftwood, caves, and floating betta logs in the tank.

That guarantees each fish has somewhere to shelter and relax when she wants to, which can prevent squabbling and bullying.

Betta fish are tropical creatures that need a water temperature of between 75 to 81 degrees Fahrenheit. If the temperature is too far outside those parameters, the fish may become stressed.

Stress in bettas weakens the fish’s immune system, leaving the animal open to attack by disease-causing bacteria and parasites. So, be sure to use an aquarium thermometer to check the water temperature daily, making adjustments as necessary.

It’s also worth noting that bettas can change color when they’re stressed. So, keep an eye on your fish to make sure they aren’t developing horizontal stress stripes on their bodies.

A fish tank is a closed environment, and unlike the betta’s natural home, there’s no rainfall or natural water flow to remove harmful substances such as ammonia from the water. So, you need an efficient filtration system to keep the water clean and prevent ammonia, nitrites, and nitrates from accumulating in the tank.

Although female bettas are not encumbered by a set of heavy, flowing fins like their male counterparts, they will still struggle to swim in a flow rate that’s too strong. In nature, betta fish live in very slow-moving or even stagnant bodies of water, so a strong current in the tank would be very stressful for your fish.

What are suitable tank mates for female bettas?

If you have sufficient space in your aquarium, you might want to add a few tank mates to keep your female betta company.

There are plenty of suitable fish species to choose from, including corydoras catfish and guppies. Basically, you need small, peaceful species that won’t try to eat the bettas. These fish are also suitable for a tank that has a male betta, too.

Here are some of the most common questions asked by people considering keeping female bettas together.

Will female bettas kill each other?

Female bettas are generally not as aggressive as males, and they can live together. However, sometimes females do fight. In a betta fish sorority, there’s usually one dominant fish that takes charge, and there may be some fighting while the pecking order is established.

That said, although you can never say never, it is quite unusual for two female bettas to fight to the death.

Could a female betta kill a male?

Although you may see some aggressive behavior on the male betta’s part before and during spawning, a female and male betta will generally get along just fine.

It’s highly unlikely that a female betta would be feisty and aggressive enough to kill a male, but it’s not out of the question, especially if the female is strong, healthy, and fully grown while the male is a small juvenile.

Can two betta fish live together? 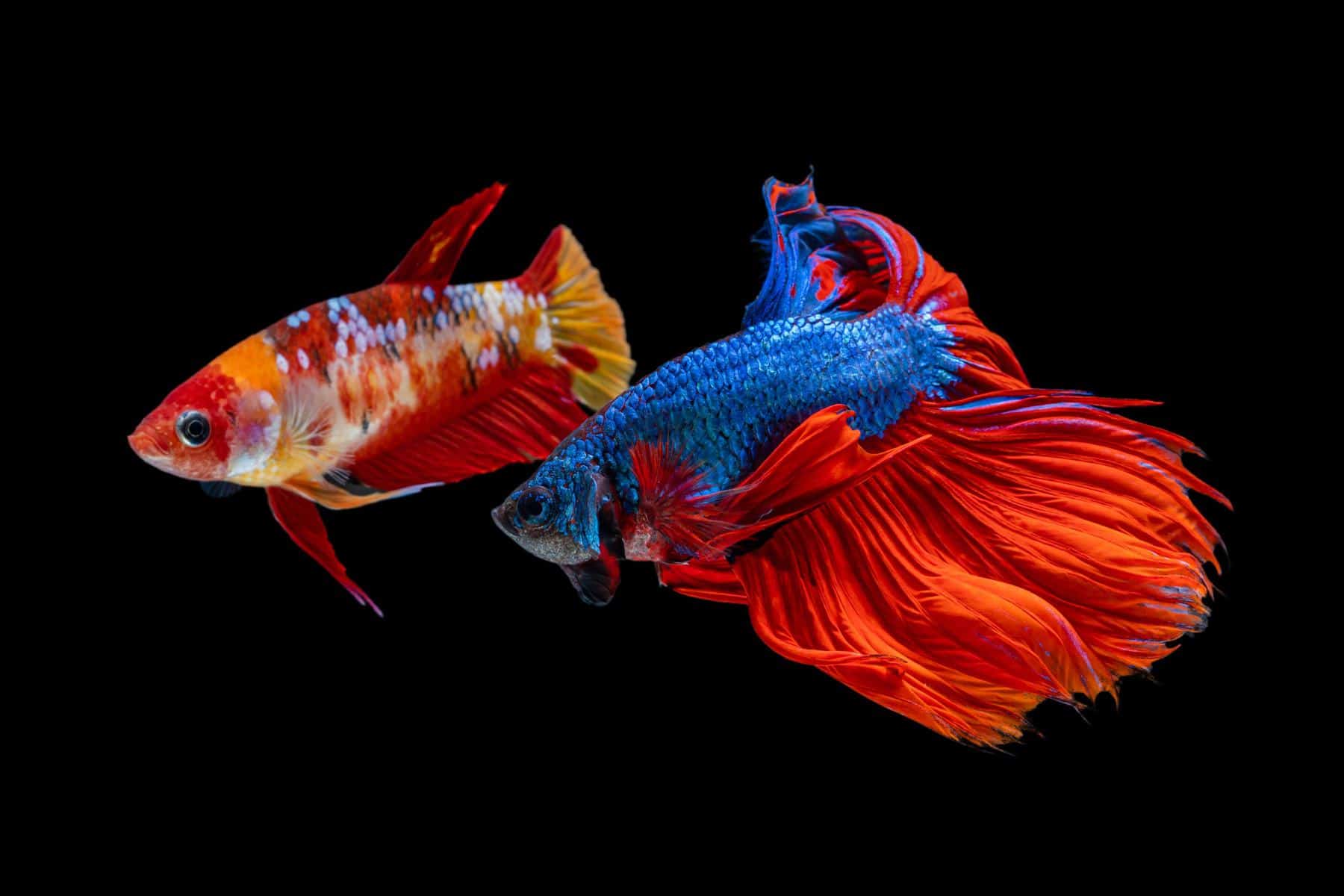 Yes. You can keep two bettas together, provided they are not both male. Keeping two males together will surely end in a fight to the death.

You can keep one male and one female betta together. The only issue here is that the male betta may harass the female to try and trigger spawning behavior. If she is the only female in your tank, your lady may become stressed by that, so be sure to provide her with plenty of caves and dense planting so she has somewhere to escape.

How many female bettas can I put in a 10-gallon tank?

If you want to start a betta sorority, you can keep up to six girls in a 10-gallon tank. However, bettas are not naturally schooling fish, so you must make sure the tank has plenty of dense planting and hiding places so the bettas can claim a space of their own and keep out of each other’s way when they want to.

How many female bettas can I put in a 5-gallon tank?

Since there’s not so much space in a 5-gallon tank, we recommend you only keep female bettas together in one. Remember, you need to allow space for lots of plants, caves, and the like so the girls have places they can get away from each other if they want to.

If you wanted to add two female bettas to your tank, you should be able to do so without having too many problems. Although female betta fish don’t have the male betta’s spectacular looks, they can still be beautiful fish that add interest to the upper area of the water column.

That said, every betta fish has its own personality, and some individuals are feistier than others. Usually, the dominant fish establishes her authority over the more submissive one, and things settle down.

You can help keep things harmonious by providing plenty of hiding places so the fish can avoid each other if they need to.