No, you cannot keep a betta fish and turtle together, even if it’s temporary. If you try to put a betta fish with any turtle species, the odds are that your fish won’t last even the week.

Why Can’t I keep Betta Fish And Turtle Together?

The reasons why you can’t keep a betta fish with a turtle include diet, space, and water parameters.

Most freshwater turtles on the banks of ponds and lakes are omnivores; some species are strictly herbivores, while others are carnivores. In general, it is safe to assume that the turtle eats both plant- and animal-based foods though it’s best to research the specific species.

In the wild, these turtles can be seen eating plant matter, algae, insects, various larvae, and fish.

This diet does not change in the aquarium, and turtles need to be fed various vegetables and algae-based foods, as well as different types of worms, shrimp, and even eggs for protein. A very popular snack for turtles is feeder fish.

Instinctually, turtles have evolved to consider moving fish as food. Unfortunately, they cannot distinguish between a meal and a tank mate, making it seem like an added betta is something to eat; most hobbyists give their turtles guppies, minnows, and other inexpensive fish as a treat.

There is no true way to work around this, as your turtle will always want to eat your betta if put together in the same aquarium. Even if your turtle species is small, it can still take chunks out of your fish.

At the very least, turtles can nip at your betta’s fins and cause permanent damage.

Most turtle species are very active, and most can get considerably large. This contrasts with betta fish that reach a maximum size of about 3 inches (7.6 cm) and are very relaxed swimmers.

Your betta fish might actually feel uncomfortable in that much open water. Add in an active, fish-hungry turtle, which could turn into a mess.

If by some chance, your betta fish does not get eaten by your turtle, it will likely stay hidden out of view. 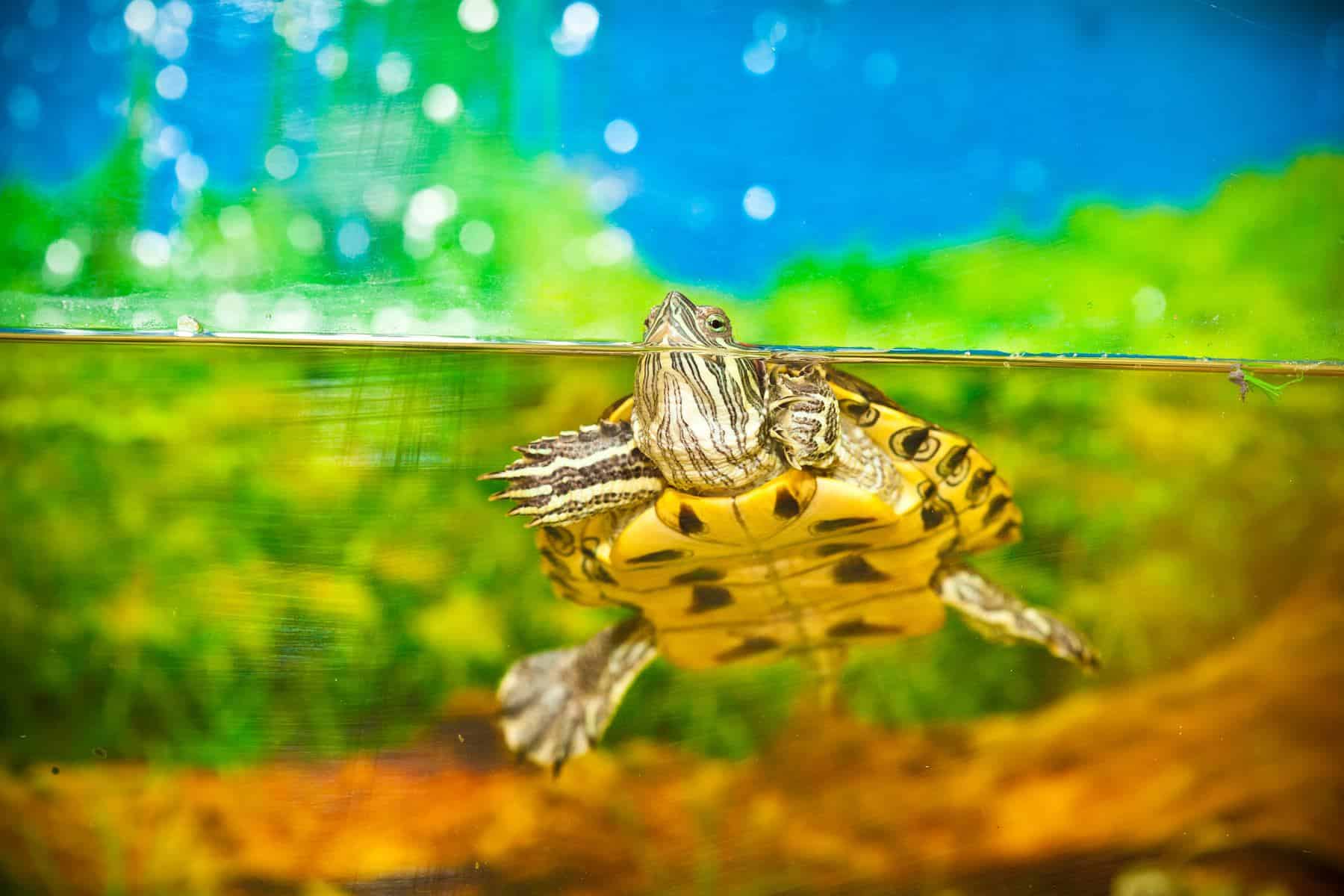 Don’t be fooled that some water parameters overlap between these two species.

The problem arises with keeping water parameters in check. For the most part, turtles are very hardy and have the ability to escape poor water conditions. However, betta fish cannot.

In addition to being very active, turtles are very messy. Not only do they create waste in the water, but they can kick up the substrate and bring in other organics from the surface.

In general, turtles can handle much higher amounts of ammonia. This does not mean it is okay to have ammonia in your aquarium! Instead, if something happens and there is an ammonia spike, you have slightly more time to correct the issue.

This is in contrast to betta fish which will start to feel the effects of ammonia immediately. For betta fish and turtles, the tank should always be pre-cycled with 0 ppm, 0ppm nitrite, and manageable nitrates (<40 ppm nitrates).

However, if something is wrong with your water, you will probably see it reflected on your betta first instead. Turtles can also temporarily withstand chlorine if it enters the system, whereas betta fish cannot.

In order to prevent any disasters from happening in your aquarium, do regular water changes and tank maintenance. Test water parameters and ensure the system is fully cycled before adding livestock. Treat water with a water conditioner to remove chlorine and chloramine and have strong filtration.

Fish that can be kept with turtles

Luckily, a few fish can be kept with turtles in the same tank. Keep in mind that compatibility will largely depend on the species of the turtle and the tank size and that long-term compatibility is never guaranteed.

If you want to keep tropical species with your turtles, then you’re going to want something fast that can escape your turtle; mud and musk turtles seem to be the most fish-friendly types.

Here are some of the better turtle tank mates:

Fish to avoid with turtles

For the most part, there are more fish that you want to avoid than those that are compatible. Some of the most common mistakes include goldfish, plecos, and cichlids.

While a popular combination might seem to be a goldfish and turtle tank, goldfish are a coldwater species and cannot withstand the higher temperatures needed by most turtles; goldfish also create an incredible amount of waste and are easily eaten.

Plecos are another favorite to add to the turtle aquarium because they help clean up algae. The truth is that plecos might actually suck onto the shells of your turtles and cause difficulty swimming, which in the worst cases, could lead to drowning.

Many hobbyists also attempt to keep cichlids with their turtles as they are big and difficult to eat. While some have had success, it’s usually agreed that cichlids are too aggressive for turtles and can start to steal food out of their mouths; cichlids also create a lot of waste which can drastically increase the bioload.

Of course, betta fish are not on the list of approved turtle tank mates.

You don’t need a pond to simulate a pond environment, but you do need a larger aquarium. It should be noted that in some areas are illegal to bring wildlife into home setups. Always check with local regulations before attempting a natural setup.

The best turtle tank mates will be the ones they encounter in their natural habitat. Here are some of those species:

Research the types of fish and plants your turtle is from and try to recreate a natural ecosystem as best as possible!

It will always be a bad idea to keep a betta fish with any turtle species. Their opposite behaviors create space issues, making their temperature requirements difficult to match.

Instead, plenty of other tropical and natural fish species would have a much longer success rate. Always research the turtle species you plan on getting and set the tank up around them.