As a betta owner, you’ll know that bettas are curious, intelligent fish that can become bored and lonely if they don’t have any tank mates.

Zebra danios are pretty, lively fishes that provide an attractive display. So, would a school of these lovely fish make good companions for a betta fish?

Keep reading to find out!

Can Your Betta Live With Zebra Danios?

As you will discover, Zebra danios aren’t the most suitable companions for betta fish for several reasons.

Bettas are tropical fish that need warm water temperatures of between 78° and 82° F to thrive. However, danios do better when kept in cooler conditions of 64° to 77° F.

Also, bettas are temperamental fish that can be aggressive, especially around feeding times, which can be highly problematic when these two species collide.

So, let’s take a closer look at whether these two species could ever live in harmony.

First of all, let’s see whether Bettas and danios can tolerate the same tank conditions.

Betta fish and Zebra danios (Danio rerio) are classed as nano fish because they can live in smaller aquariums. That makes both these species very popular for inclusion in home fish tanks.

However, bettas are temperamental fish that can be very aggressive, and keeping them in a small tank with speedy swimmers is asking for trouble. Danios are also schooling fish that need to be kept in large groups, so a larger tank of at least 20 gallons is essential to prevent overcrowding and fighting.

In the wild environment, betta fish live in heavily vegetated habitats, including ponds, shallow bodies of water, rice paddies, and slow-moving streams. The water here is stagnant or very slow-moving.

Zebra danios share similar wild habitats. In captivity, like bettas, danios like a well-planted habitat, and they prefer a slow flow rate, but they also need plenty of open swimming space.

So, you need lots of natural planting in your tank, as well as some resting spots for your betta, pieces of driftwood, twisted roots, and rockwork to create natural barriers and areas that the fish can establish as territories. That can help to prevent aggression and make the fish feel more settled and secure.

Betta fish and Zebra danios share similar water parameter needs, such as a pH between 6.0 and 8.0, and water hardness in the range of 5 to 20 dH.

However, these two ornamental fish species have slightly different water temperature preferences. Bettas are tropical fish that need warm water temperatures of 78° to 82° F. However, danios prefer cooler conditions of 64° to 77° F. That said, captive-bred danios are often raised in warm water and sold as a tropical species, so they can tolerate temperatures at the cooler end of the betta’s range.

Bettas are surprisingly sensitive to water quality, so you’ll need to carry out frequent water changes and monitor the water parameters regularly. Ideally, you should carry out partial weekly water changes of up to 20% fresh water and have a high-quality filtration system installed in your fish tank.

Use an aquarium water testing kit to run water tests every week.

Bettas and danios are not a good fit when it comes to their behaviors.

Betta fish mostly like to hang out in the upper area of the water column, close to the surface. That’s because bettas are surface feeders, hunting for water-bound insects and even leaping out of the water to grab flies as they hover over the water. Betta fish are labyrinth breathers, and they need to periodically breathe atmospheric air via their labyrinth organ at the water surface.

Zebra danios also like to swim in the mid to upper reaches of the water column, which brings them into direct confrontation with the betta fish.

Bettas are highly territorial and can be very aggressive if confronted by a perceived rival on their patch.

While bettas are an aggressive and territorial fish species, danios are active fish that can be nippy and will hassle your poor betta, attracted by his long, flowing fins. Also, danios are fast, active swimmers, and being surrounded by all that movement can be stressful for your betta fish.

A stressed betta will quickly develop health problems, and damaged fins are likely to become infected by bacteria.

Betta fish are primarily carnivorous, enjoying a diet of primarily meaty protein with a small amount of algae and plant matter. Zebra danios are omnivores, eating both meat and plant matter. So, you can feed both species a similar diet of high-quality fish flake food, pellet, and frozen meaty foods, such as bloodworms, mosquito larvae, daphnia, and the like.

That sounds perfectly fine, but unfortunately, the fact that both species eat a very similar diet can cause conflict at feeding time. Danios are very voracious feeders, and they’re much quicker than bettas, so there’s a chance that your poor betta could go hungry, especially if you have a large group of danios.

How Can Bettas And Zebra Danios Coexist?

Even though you can see that betta fish and danios have notable differences, they can live together if properly managed.

Almost all the Zebra danios you buy in pet stores are captive-bred and raised in warmer water than they experience in the wild. For that reason, your danios will be very happy living in a warm tank with the water at a temperature to suit your betta.

Use A Large Tank!

If you put a shoal of danios and a betta fish in a small tank, you’re asking for trouble. Ideally, you want at least a 20-gallon fish tank for one betta fish and a group of six danios.

A large tank allows plenty of space for the fish to keep out of each other’s way. Also, choose a long tank rather than a tall one to maximize the swimming space available for the speedy danios.

Include Lots Of Plants

Make sure that you put plenty of living plants in your community tank so that the danios and betta have plenty of places to hide if they feel the need. That can help to reduce stress and keep your community healthy and happy.

Since both species tend to compete for food, it can work well if you feed your danios and betta several times a day, placing some food at either end of the tank.

Watch carefully to make sure that your betta gets enough to eat. In extreme cases, you might even need to insert a temporary tank divider at feeding times to keep the betta and danios apart. 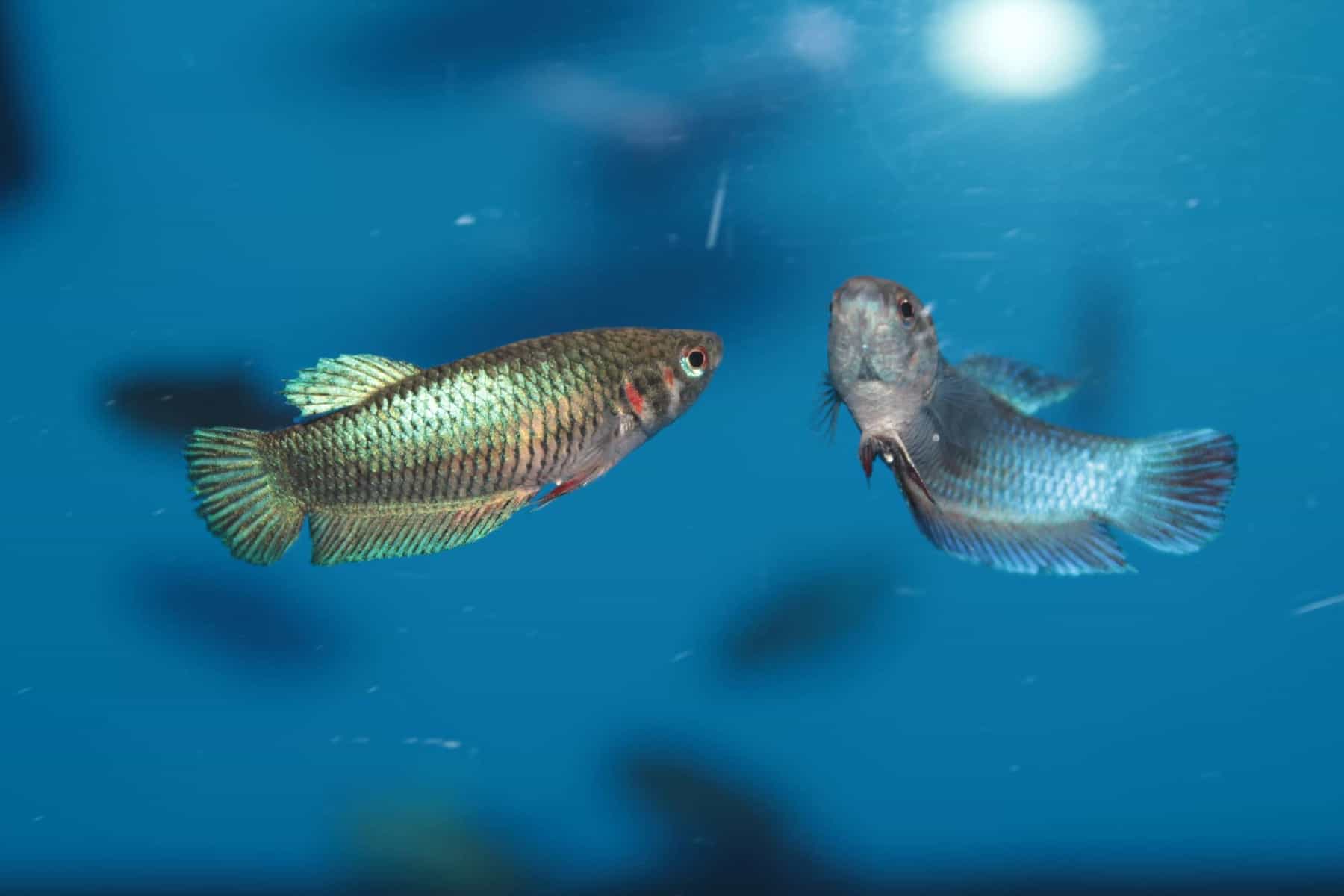 If you don’t want to risk keeping Zebra danios with your betta, what fish could you choose instead as companions for your betta fish?

There are quite a few fish species that make good tank mates for betta fish.

You want to avoid including any fish that are very brightly colored or have long, extravagant finnage. Bettas often mistake those fish as rivals and might attack their companions. Bettas are not generally very agile or fast swimmers, so it’s best to avoid speed freaks, as that can stress the betta.

So, you want peaceful fish species that won’t hassle or nip your betta. Ideally, fish that inhabit the lower areas of the tank are best, as they won’t conflict with the betta at feeding times.

Suitable tank mates for bettas include:

Essentially, you want small, peaceful species that mind their own business.

Zebra danios do best with other small species, including neon tetras, glowlight tetras, taillight tetras, cardinal tetras, corydoras catfish, and guppies. All those species can tolerate the same water conditions as danios, and they are all peaceful fish that won’t cause problems with aggression.

If you want to keep a single-species tank, you could always keep a larger school of danios of at least six individuals.

So, in theory, Zebra danios and bettas can live in the same tank, although that’s not a marriage made in heaven, and keeping the two species together can be a bad idea.

Bettas can be very aggressive and might hassle the danios. Alternatively, the danios might bother the slow-moving betta, nipping his fins and causing stress and health problems. Danios need slightly cooler water conditions than bettas, although most can adjust relatively easily. During feeding times, there may be a conflict since danios can be voracious feeders, and your betta is a slow-feeding fish.

All that said, you can keep the two species together with some careful management and in a large, well-planted aquarium.