Betta fish tend to be too aggressive to be kept in the same aquarium. Indeed the cruel fighting contests between these fish gave them their other common name – Siamese Fighting Fish.

This has led to a conundrum in the fishkeeping world since male betta splendens are some of the most popular pet fish around, yet you can’t keep more than one in the same tank…

Enter Aqua One Betta Trio is a divided tank designed to keep three bettas in a single aquarium. But is it really suitable for bettas? Let’s find out.

Things To Consider Before Buying

So you want to keep more than one betta in a single tank? Well, who wouldn’t? But you’ll probably know that male betta splendens should never be kept with other males or females except for mating.

While keeping one tank with dividers is possible, consider your other options first.

Some fishkeepers manage to keep several female bettas in one tank. These ‘sorority tanks’ are not without challenges and are best left to advanced hobbyists.

There are also other betta species, such as betta falx and betta smaragdina which you can keep together in mixed groups – so don’t think that a divided tank is your only option!

Ways To Divide Your Bettas

If you want to go for a single tank with dividers, you need to ensure that each section will be large enough for each fish. Bettas need at least 5 gallons of space for each fish, and most divided tanks on the market offer substantially less.

When it comes to fishkeeping, your fish’s well-being must always come first.

But don’t give up just yet! You could still buy a 15-20 gallon tank and make or buy your own dividers. You can find out more about betta dividers here.

A final option for keeping 3 male bettas would simply be to buy 3 independent 5-gallon aquariums. They could be kept side-by-side, or perhaps one in each room of the house! 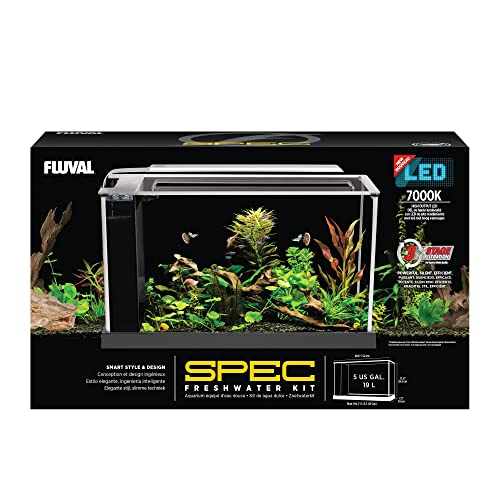 It comes with a three-stage filter, heater, and LED lighting. All you need to add is your own substrate, water, decor, and… fish! Note that it doesn’t come with the cabinet that it’s often pictured on.

It has a sleek, modern, rimless design with a black background and is definitely eye-catching. 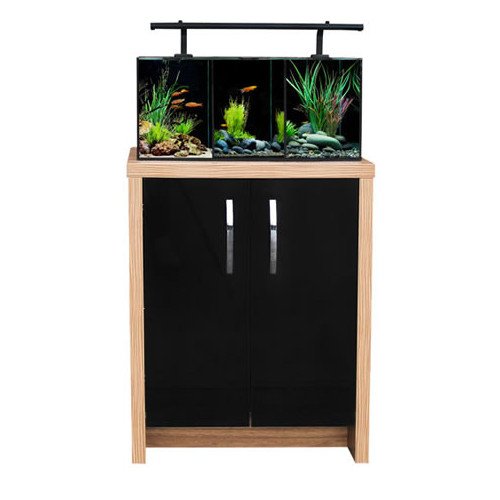 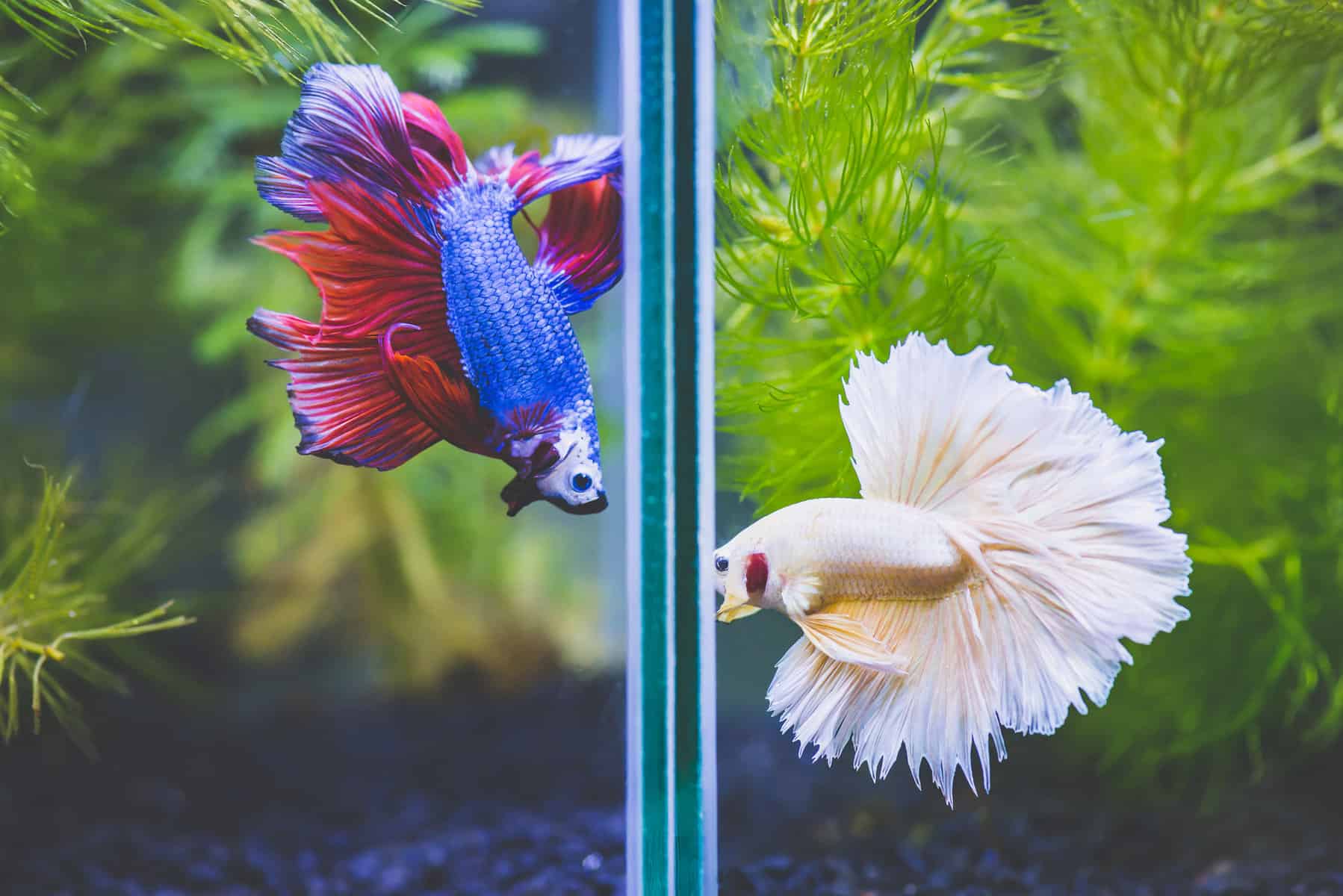 This is a solidly built aquarium, using sturdy 4mm glass. The front panel is rimless at the top, and each compartment features lids with a feeding hole.

Some tank owners have made removable covers for the feeding holes to prevent their bettas from jumping out!

You can also consider international shipping through some shipping group that offers shipping services in your country. However, you must first consult with these groups about their additional shipping fees.

Before shipping, keenly check the item description to ensure it has all the features you’re looking for.

The overall look of the tank is sharp and sleek, with the black background and overhead lighting giving it a smart, modern appearance.

Aqua One recommends their ‘Inspire 60’ wooden cabinet model with black doors to mount the tank.

The two dividers in the tank are tight-fitting and non-removable. They are blacked out so that the bettas won’t be able to see each other.

This is important since bettas will still try to fight each other through transparent separators, which can cause them significant stress.

The split-tank concept lets you get creative and set up different habitats or styles in each compartment. For example, you could go for lots of green plants with some floating species in the first chamber.

You can also create a style with a more rocky aquascape with white gravel in the middle, followed by red plants and some driftwood in the last section.

The dividers also contain slits in the top and bottom to aid water flow, although they’re rather small to allow for sufficient water flow throughout the tank.

A real highlight of this aquarium is the beautiful LED lighting unit that hangs above the water. The unit consists of 48 LED bulbs (32 RGB and 16 white) which give off an attractive warm glow.

This is enough lighting to grow aquatic plants and helps fish colors pop. LEDs are also very economical – the whole unit only uses 6 watts of electricity.

However, one caveat with the tank’s lighting is the black background, which is great for highlighting bright colors but makes it harder to see dark-colored fish or translucent shrimps against it.

The tank comes supplied with a decent heater. No designated space is allocated for it, so you’ll have to find somewhere to tuck it behind your plants or decor in the center of the tank.

The tank comes with a thorough multi-stage filter system with three sections. The first stage is a sponge that offers both mechanical and biological filtration.

The third stage is a carbon filter for removing fine particles and toxins in the water.

While the filter contains generous quantities of media, there is one fundamental flaw: The filter output comes out in the right-most section of the tank, and the input draws in water from the left-most compartment.

Over time, fishkeepers have reported that the fish in the section with the outflow becomes stressed by the strong current, whereas the chamber on the other side of the tank becomes cloudy and dirty.

Bettas need slow-flowing, clean water, and being permanently shut in a small space with a fast current or dirty water is not a betta’s idea of fun.

Some owners have employed a spray bar to distribute the filter’s flow over the entire aquarium to combat this. This is a fine idea that perhaps the manufacturers could consider installing as standard.

Now we’ll talk about the biggest downside of this fish tank: space.

As you’ll know from reading our setup and care articles, each betta fish needs a minimum of 5 gallons of swimming space each. Some betta owners even prefer to give a single betta at least a 10-gallon tank.

This tank, at just 8.4 gallons, would only be suitable for one betta if it weren’t divided. But since each section only contains 2.8 gallons of water each, we’d say the compartments are far too small for a betta fish.

When I called the customer service team at Aqua One to ask about this, they responded that you wouldn’t necessarily have to keep betta fish in the tank.

While this is true, I think the tank’s name is misleading if it’s not intended for betta fish!

This is a shame because the tank has a lovely concept and design. It would be an outstanding setup if it were considerably bigger and with a filtration system that worked in all three chambers!

The Aqua One Betta Trio is a glamorous aquarium with a cool concept, fantastic lighting, and some nice design features.

It’s just too bad that the filter doesn’t work well through the whole tank and that the three compartments are too small for betta fish!

While you could keep other species, such as shrimps and snails, in the different chambers, they would do equally well in a 5 or 10-gallon tank without dividers.

If you really want to keep several betta fish in the same tank, consider a different species of wild betta, such as betta smaragdina or betta falx, that can be kept in small groups in a larger aquarium without dividers.

Alternatively, you could buy a 15 or 20-gallon tank and insert two dividers yourself. Either homemade or from the store.

In either of these cases, you’ll need a much larger tank. The Tetra 20-Gallon Aquarium is a reliable model that comes complete with lighting, a filter, and a heater. It also costs much less than the 8.4-gallon Aqua One Betta Trio while giving you more room to experiment.