Fish make some of the best pets in a home. They are fun and beautiful to have around. The betta fish is a unique species from Thailand and is popularly known for its aggressiveness and beauty.

They also go by the terms Siamese fighting fish, Labyrinth fish, or by their scientific name, Betta splendens. If you choose to rear this group of fish, you need to do a little more research for a successful experience.

This guide will enlighten you on all the necessary details you’ll need to become a great “fish parent” and take care of a pregnant betta fish.

What’s the Difference Between a Female & Male Betta Fish?

Let’s break it down to a few questions for a better understanding. First, let’s differentiate between a male and a female betta fish.

Male bettas are a bit more colorful compared to their female counterparts. They also have longer fins, making them more noticeable.

Female betta fish have shorter fins than their male counterparts and have duller colors. In most cases, they are smaller in size than males.

How Does a Betta Fish Become Pregnant?

The female betta fish cannot carry a pregnancy. Biologically, it’s an egg-laying animal. So, it lays eggs, and then the eggs are fertilized to hatch “fry” – the fish babies.

How Long Is a Betta Fish Pregnant

As mentioned earlier, the betta fish can’t carry a pregnancy, but they lay an average of 350 eggs during every fish gestation period. Additionally, a gravid betta fish will hold the eggs for one to two weeks before releasing them for fertilization.

Betta fish lay about 10-30 eggs during every spawn until the fish releases all the eggs, which could take a few minutes or an hour. After spawning and fertilization, it takes around two to three days for the eggs to hatch.

Which One Is More Hostile, the Female or Male Betta Fish?

The female betta fish is less hostile than the male. That means having more than one female fish in one tank is possible. However, it’s advisable not to host too many in one space as the betta are a species that appreciates personal space.

As for their male counterparts, it’s more challenging to keep them in a group in one tank. They are very aggressive and could easily injure each other.

Even when introducing the male to a gravid female betta fish for mating, you need to keep a close eye to control their interactions lest they hurt each other.

Signs and Symptoms That Your Betta Fish Is Pregnant 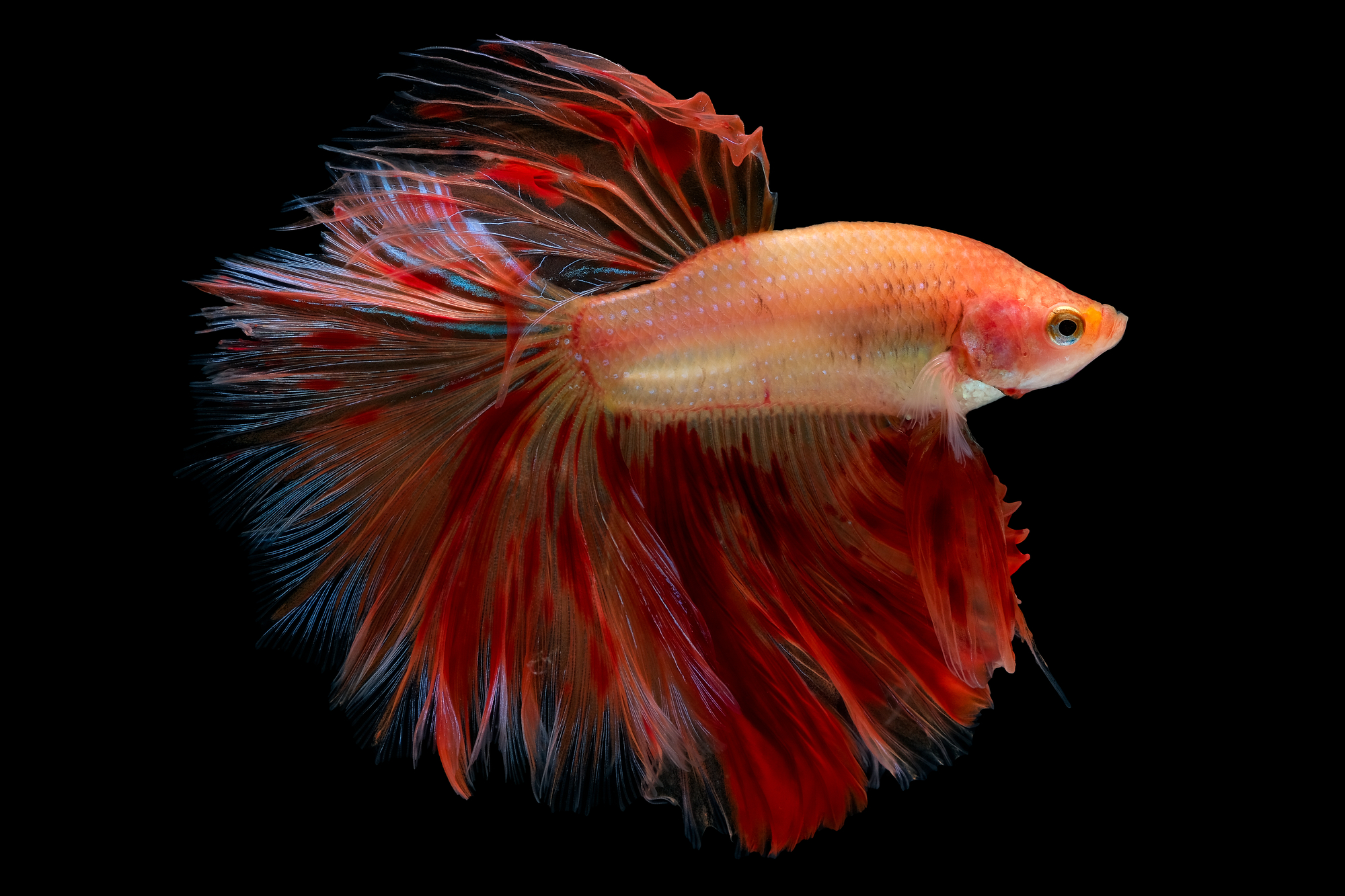 Before introducing your female betta fish to a male, here are some guiding signs that it’s mature enough and ready for mating.

One of the primary signs is a mildly bloated abdomen on the female betta fish, making it appear pregnant. That’s because of the eggs forming inside the body. However, there are many health-related reasons why your fish could have a bloated abdomen.

So, observe it for a few days to ensure it can comfortably excrete and move around. The female betta requires a lot of monitoring and patience to ensure it’s not sick but “pregnant.” Additionally, the abdomen is more visible if you look at the fish from the top of the tank.

A pregnant betta fish, ready for mating, will develop some visible stripes of a lighter color on its surface that were previously not noticeable. So, if you keep track of its growth, you can easily spot that. However, this is not the case for all pregnant betta fish.

Her Ovipositor Is More Visible

The ovipositor looks like a grain of salt inside the female betta fish, where they store the eggs. It’s on the lower side and is white when the female is ready for spawning. Therefore, it’s easier to spot it if you observe your fish from beneath.

You will notice the sudden interest in a male betta if they are in close tanks. The female will keep swimming in the direction of the male betta’s tank and spend most of the time there.

How to Take Care of a Pregnant Betta Fish

All fish require a lot of effort and care to grow and stay healthy. Like every other animal, a pregnant betta fish requires a higher level of care and support for a successful journey.

Pregnant mature female betta fish are gravid, meaning they are ready to mate and lay eggs. Therefore, there are a few measures you need in place to ease the mating, fertilization, and hatching process. Here are some crucial guidelines.

The first and most important point to note is that the male betta fish attract their female counterparts by creating bubble nests. A bubble nest is crucial for protecting the eggs after spawning and the fry after hatching.

You must ensure the environment is stable enough for the male betta fish to create the bubble nest. Here are some of the necessary steps for achieving a favorable environment.

The betta fish will only thrive when conditions are conducive to mating. So, a clean environment is crucial if you want to breed your betta fish. You must change the water at least once weekly to reduce contamination and ensure a good oxygen flow.

You can even use a Styrofoam cup to scoop up the bubble nest and return it to its place after cleaning. However, the male will always create a new bubble nest whenever they need to attract a female for mating.

Turn Down Your Filters

Fish tend to mate and spawn more when there’s less current. So, you can regulate your filters to ensure the tank is still clean and well-oxygenated but calm. Remember, stagnant water could attract contaminants, so regulate filters but don’t withdraw the current altogether.

Increase the Temperature in the Tank

Although betta fish can mate any time of the year, they are more likely to do it when it’s warmer. Warmer water is excellent for hatching. Therefore, if you wish to breed your betta fish during a cold season, set the tank’s temperature between 75-80 degrees Fahrenheit before the mating, spawning, and hatching period.

You have a picture of the best environment for mating and spawning. So how does the whole breeding process happen? Read on to find out.

Always remember, betta fish are hostile. So, you must exercise caution when introducing the female to the male.

First, for the mating process to occur, the female betta fish must be gravid or mature enough for mating. You can verify that by looking for the signs mentioned earlier. After that, you can introduce both partners in the breeding tank.

However, before introducing the male and female betta fish in the same tank, don’t forget this is a hostile species. Put the two in separate tanks close to each other and watch their level of hostility towards each other. This is also a great way to introduce them to each other. After that, wait until they appear calm at the sight of each other, which could take a few days.

Once that happens, you can introduce each to the breeding tank separately. Begin with the female betta fish and leave it alone in the breeding tank for at least two days. That should be enough time to familiarize itself with the environment and stake out some hiding spots to recover after spawning.

After a couple of days, remove the female betta and return it to its tank. Then, put the male betta fish in the breeding tank for two days before reintroducing the female. Here, you must be very careful when physically introducing the two to ensure they don’t fight and hurt each other.

If the breeding pair are still hostile, remove the female betta and place it in a separate tank or use a tank divider until it shows some interest in the male partner.

When you successfully introduce the two, mating and spawning occur, which could take a few days. The male will follow the female and is supposed to welcome it to the bubble nest.

If the male impresses the female betta fish, the female will move closer to the bubble nest. Consequently, the male embraces the female, squeezing the eggs out of the female’s ovipositor.

It’s important to note that a healthy fish can lay eggs without the presence of a male partner. The only difference is that these eggs are not fertile, so they will not hatch betta babies.

After fertilization, the female betta goes into hiding, recovering from the spawning process, so moving it to a separate tank is recommended.

Also, after the eggs hatch, it’s a good idea to remove the male from the tank, as it might eat some of the baby fish.

Betta fish can’t carry a pregnancy. Instead, they lay eggs. Understanding the breeding process and how to prepare the breeding ground will facilitate reproduction and hopefully result in a healthy batch of fry.

With all this knowledge, you can now take care of your female betta fish after the spawning for a better recovery and know when it’s ready for mating. For a better understanding of this fish species, check out this article.