The beautiful betta fish comes in so many different forms and colors, you’ll be hard-pressed to decide which one to bring home from the fish store!

In this guide, we focus on the paradise betta. We’ll answer your questions, including how to care for these stunning fish and give you advice on where you can buy one.

So without further ado, let’s find out more about the paradise betta and its origins.

What is a paradise betta?

The paradise betta gained the public’s attention following the release of Finding Dory, a film that featured a blue tang fish. Every kid who saw the movie wanted to own a Dory!

However, Dory is a blue tang, and unfortunately, that’s a marine species of fish that’s neither cheap to buy nor suitable for beginners to care for. So, a blue fishy alternative was required. Enter well-known pet store chain and tropical fish retailer, Petco.

Petco spotted a gap in the market that needed to be filled, so the company introduced a blue tang alternative in the form of the paradise betta. Not only are paradise bettas absolutely beautiful, but they’re considerably easier to care for than tangs. Plus, they make excellent interactive pets for kids. 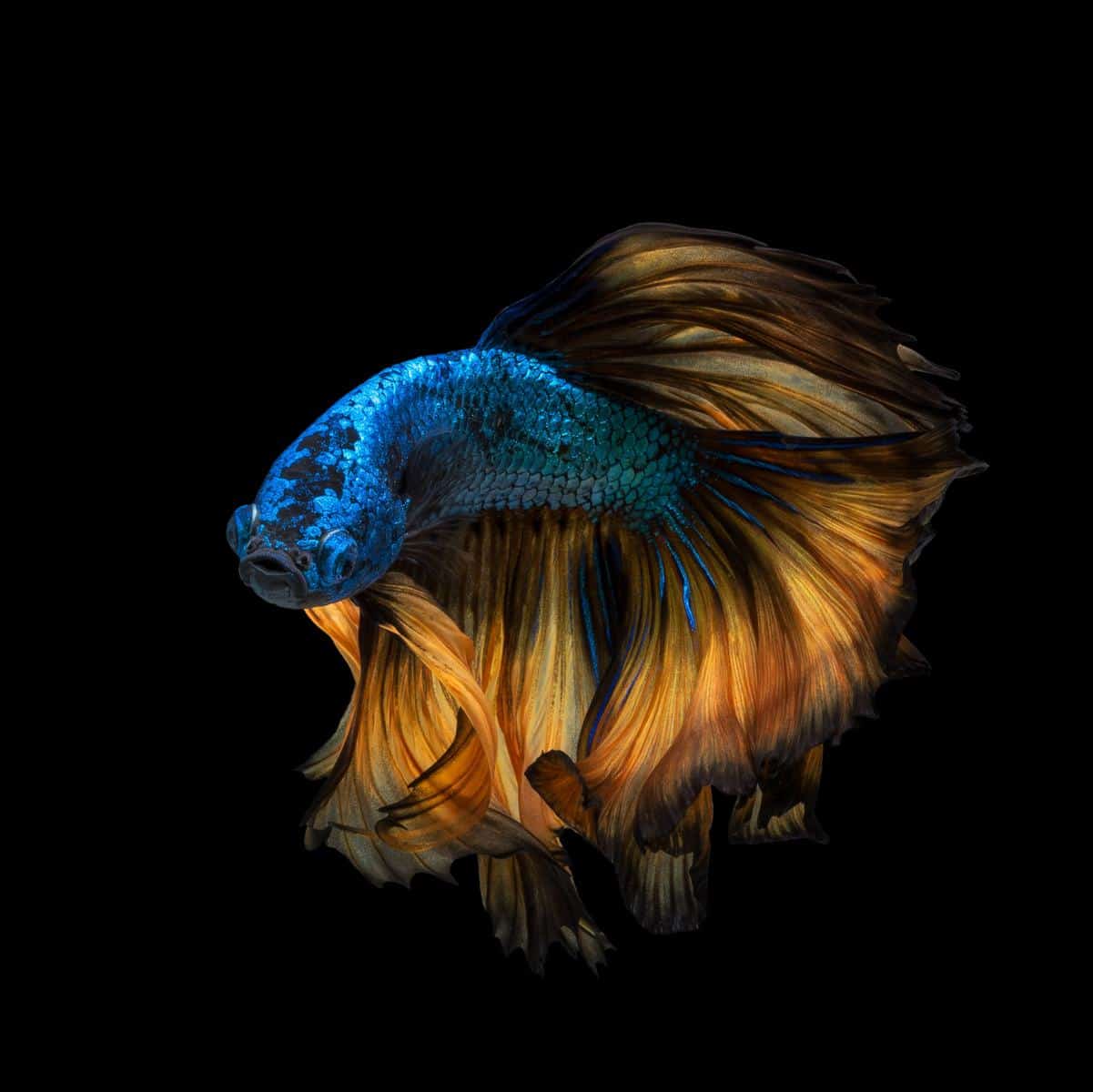 Paradise bettas can be bi- or even multi-colored, usually with different colored bodies and finnage.

The body is usually blue, just like Dory, and the fins are yellow or yellowish-orange, tinged with blue that bleeds from the body into the fins in uneven waves. Paradise bettas are also sometimes referred to as mustard gas bettas, as the two varieties are essentially very similar. The main difference between them is that mustard gas bettas can have green bodies as well as blue.

The color morph you choose is a matter of personal choice, and there are indeed plenty of choices! The paradise betta’s body color can be very dark blue, vibrant electric blue, shades of pale sky blue, or even turquoise. The scales can be metallic or matte.

What’s the difference between a male and female paradise betta?

When it comes to paradise bettas, it’s super-easy to tell the boys from the girls.

Basically, the guys are all show with extravagant, flowing finnage and dazzling, bright colors. The girls, on the other hand, are rather boring and drab, lacking the long fins and vibrant colors of their male counterparts. They’re also slightly plumper and a bit larger than males.

How big are paradise bettas?

In comparison to the blue tang (or Dory) that grows to be around 12 inches long, paradise bettas are tiny, only reaching around 3 inches long when fully grown. Indeed, many specimens are smaller than that.

That makes them easier to care for, as the betta can live happily in a nano tank.

Unfortunately, these bettas have a relatively short lifespan of between three to five years, whereas the blue tang can live up to 20 years. However, you can maximize your betta’s life expectancy by feeding it a high-quality diet and ensuring its tank is clean and properly maintained.

Where do paradise bettas come from?

The original paradise betta, also known as the mustard gas betta, was created in the late 1990s by breeder Jude Al after over a decade of experimentation and crossbreeding different variants of the species.

These days, most paradise bettas that find their way onto the market are produced in large numbers by commercial breeders in Southeast Asia. Consequently, dilution of the original genetic line means there is considerable variation in the colors and quality of the fish that are now entering the hobby.

However, thanks to the popularity of Finding Dory and the demand for blue fish it created, the paradise betta is pretty easy to find.

So, now you know the paradise betta has a blue body, but it’s the fish’s tail that draws the eye. And there are plenty of tail shapes to choose from.

The half-moon form is just about the most common tail shape for paradise bettas, and it’s derived from the original fish of the 1990s.

In a half-moon betta, the fish’s caudal fin, or tail, forms a half-moon shape of 180 degrees that spreads out and floats around the fish like a spectacular cape.

The delta tail is another version of the half-moon, although it has a more triangular shape when it’s fully extended.

The veiltail is probably the most commonly available betta tail type. You probably already guessed by its name, but a veiltail hangs down like a veil.

The full-moon variation of the paradise betta is essentially the same as the half-moon, except its tail circumference is greater than 180 degrees.

Rose-tail paradise bettas have a tail that’s basically a multi-folded half-moon that looks like a rose with overlapping petals. 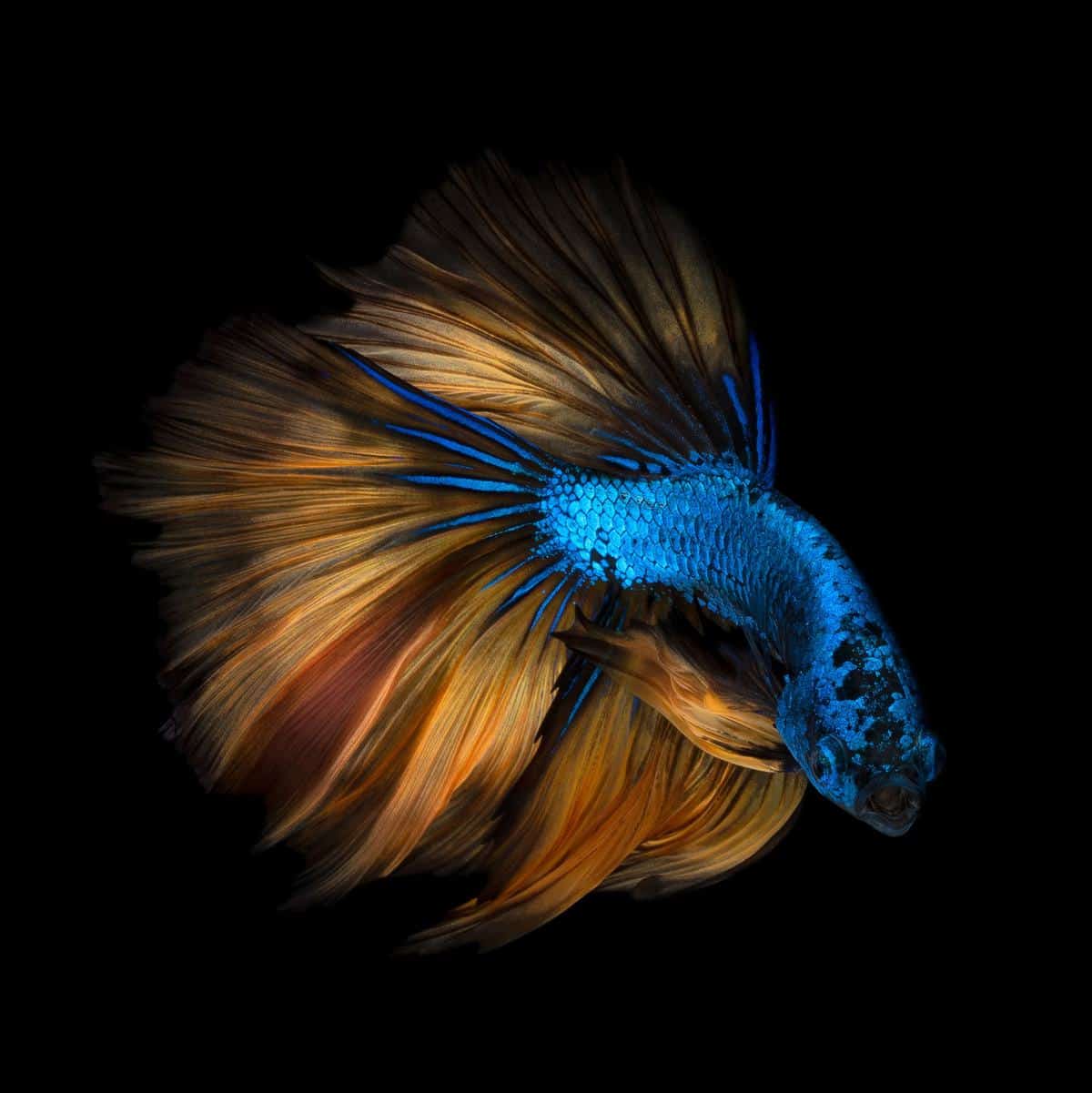 Paradise bettas are highly territorial, and like all bettas, can be very aggressive. You must not under any circumstances keep two male bettas of any variety together. They will definitely fight, potentially to the death.

That said, you can keep your paradise betta with a few tank mates to save it from boredom and loneliness.

Since the betta spends most of its time in the upper part of the water column, it’s best to choose small, peaceful bottom-dwellers like corydoras catfish. These cute little armored catfish are extremely easy to care for, and they won’t bother your betta. Corys are also quick enough to get out of the way if the betta gets a little too curious for their liking.

Yes, they are! Well…most of the time, anyway.

Like people, betta fish have their own unique personalities. Some bettas are hypervigilant, spending most of their day patrolling the tank on the lookout for rival males. Others are very lazy, preferring to rest on flat leaves, hammocks, or hollow logs, only bothering to move when it’s feeding time.

However, in general, you can expect your betta fish to be reasonably active. These are intelligent, curious fish that will readily interact with their owners. You can even teach your paradise betta a few simple tricks, like jumping out of the water to take food from your hand! For that reason, you should always provide your betta with plenty of toys to keep him amused when you’re not around.

Raising a healthy betta fish is relatively easy, as long as you give your pet the correct environment to live in and feed him a balanced and nutritionally correct diet.

You must provide your betta with a nice tank; betta cups, bowls, and vases are not suitable places for a betta fish! Your betta can live in a nano tank, although the more space he has, the happier your pet will be.

Your paradise betta is both a surface feeder and labyrinth breather. That means your fish must occasionally take breaths of air at the water surface to breathe. That’s an adaptation that helps wild bettas survive in oxygen-depleted water and spells of very dry weather when the water level in their natural habitat falls.

Those beautiful flowing fins are heavy, and that can make getting to the surface tough for your little pet. For that reason, a tank that’s long instead of deep is the best choice.

Betta fish can also jump. Again, that’s an evolutionary quirk that enables the fish to relocate to more favorable conditions, find a mate, or escape predators or other aggressive males. So, you’ll need to choose a tank that has a tightly-fitting lid, or at least a cover slide.

The paradise betta is a tropical fish. That means he needs warm water to survive, ideally at a temperature of between 72 and 82 degrees Fahrenheit. If the water temperature is too warm or cool, your pet will suffer temperature shock, which could kill him.

Every fish tank should have a filtration system to keep the water clean and safe for the fish.

A paradise betta with his flowing finnage won’t appreciate strong water movement that will make swimming even more challenging. In fact, in nature, bettas live in stagnant or slow-moving bodies of water, like ditches and rice paddies.

A sponge filter or HOB (hang on the back) filter system will keep the tank clean without creating a strong current. Weekly partial water changes are necessary, and you’ll also need to remove fish waste, leftover food, and plant debris from the substrate using an aquarium vacuum.

Bettas love to mark out a territory, so provide your pet with plenty of caves, smooth rockwork, and lots of bushy plants he can claim as his.

Be very careful not to put anything rough or sharp in the tank, as that glorious flowing tail will almost certainly get snagged, and your fish could be badly injured.

What do paradise betta fish eat, you ask? Well, bettas eat a small amount of algae and plant matter, but most of the betta’s diet in nature is made up of meaty protein — primarily insect larvae — and water-bound insects.

To replicate that diet in your pet paradise betta, you should feed him a basic ration of mini betta pellets and crushed tropical flakes as well as frozen bloodworms, brine shrimp, daphnia, and the like.

You can feed your fish live food, however, we advise you do so with caution. Live food is one of the main ways parasites and bacteria get into fish tanks, so it’s better to feed your betta frozen meaty food. For the same reason, you must never take live food from the environment.

If you are keen to give your pet live food, you might want to try raising brine shrimp using a kit. 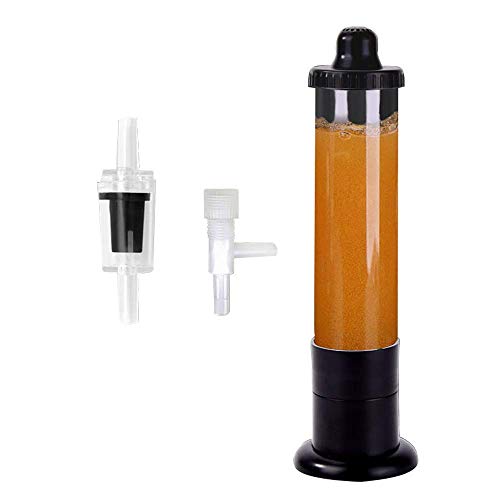 How much and how often should I feed my paradise betta?

One of the primary causes of health problems in betta fish is overfeeding. That can lead to problems such as bloat, constipation, and associated swim bladder issues.  So, you should feed your betta two to three times daily, only offering what it will eat in a minute or two.

It’s also wise to choose one day per week when you don’t feed your fish at all. That won’t harm or stress your paradise betta, but it will allow its body time to process any food that’s still in its digestive system, helping prevent the problems mentioned above.

You won’t see paradise bettas for sale at your local pet or fish store. However, you can usually find them for sale at Petco, as it was the first retailer to make this betta fish variant so popular.

Buying from an auction

Alternatively, you could check out online auction sites, like Aquabid. Although you’ll find a wide variety of bettas for sale there, including paradise bettas, there are a couple of things to bear in mind when buying from an auction site.

Many of the sellers who use auction sites are located overseas. Always double-check where the seller is located in relation to your home country before you bid on a fish. There are two reasons for that:

Often, the best way to get the paradise betta you want is to ask your local fish store to source one for you. That way, you get to see the fish in the store before you pay for it, and you don’t have the stress of waiting for the betta to arrive on your doorstep before finding out if it survived the journey.

If you want to bring a mini-movie star, or at least a Dory lookalike, into your life, consider the paradise betta.

These beautiful little fish make charming interactive pets. They’re relatively easy to care for, don’t need a big tank, and don’t cost an arm and a leg to buy. The only downside of the paradise betta is that you can only keep one per tank, and trust us; you’ll love this fish so much, you’ll want dozens.