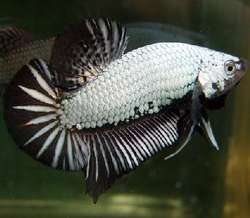 For the past several years, both authors have extensively worked on metallics in their breeding programs. Their experiences and thoughts on the metallic trait were written down in several articles (“Copper gold” (2003)[1]; “Metallics and Masks” (2005) [2]; “Understanding metallic genetics” (2006) [3]). Both authors decided to team up in order to share their thoughts and experiences on “dragons”.


It is clear that the development of the metallic betta was the catalyst of a true “bling-bling”-fever among betta hobbyists worldwide. Metallics have greatly influenced the betta hobby and opened doors for many breeders to develop new color varieties and combinations.Following the metallic betta which made such a prominent mark on the betta hobby, a new variant came hard on its heels. The unique appearance of this so-called “dragon” betta is characterized by a thick, solid silvery/white metallic layer which almost resembles armor.”Dragons” captured the imaginations of betta breeders the world over,leading to the hype that has been humorously termed “dragon fever”. But what exactly are “dragons”, where did they come from and are they really different from our metallics? 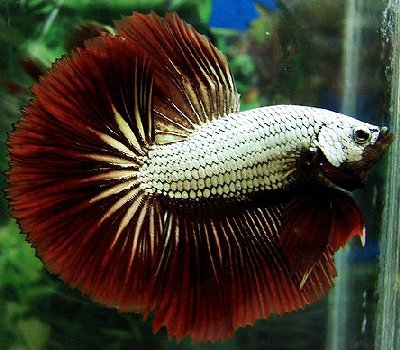 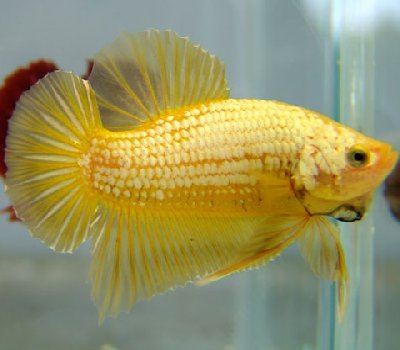 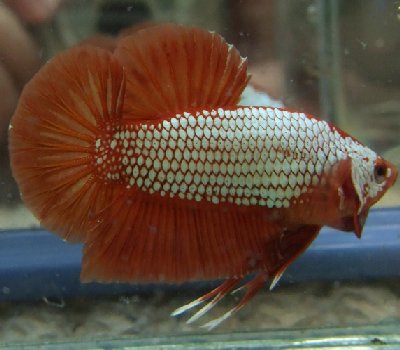 The origin of the “dragon” betta

According to Pichet (Interfish breeder team – Thailand), the first”dragons” were created by using a “super” red plakat, a red copperplakat and Betta sp. mahachai [8]. With some difficulty, the wild Bettasp. mahachai was crossed to the red copper plakat with the intent ofpreserving the Betta sp. mahachai traits in the offspring. Then a youngmale from this spawn was crossed to a super red plakat female. Thethird step was a mother x son backcross: the super red female wascrossed to one of her offspring in a method commonly referred to as’line breeding’. Although the body shape and finnage of the fry was notvery good and some of them even showed malformations in the body, thecolor was there and the first dragon pair was born! The first “dragons”were developed by Mr. Tea. The “Red dragon V1″ were first presented tothe Thai public in the December 2004 edition of a magazine called”Fancy Fish” by the Interfish breeder team [9].