Did you notice that your betta fish has lost some of its scales?

If your fishy friend is looking a little threadbare, you’ll need to know if shedding scales is a normal process for fish.

So, do betta fish molt?

Read this fascinating guide to find out!

The simple answer to that question is no. Healthy fish don’t naturally molt or shed their scales.

Betta fish are not like snakes that need to shed their skin to accommodate new growth. Fish scales and skin grow with the fish.

Neither do betta fish molt seasonally. Dogs and cats tend to shed seasonally in line with changing light levels and temperatures. The animal’s soft, fluffy undercoat is shed and replaced with a fresh one, thicker in fall to keep the creature warm in winter and thinner in spring so that the animal doesn’t overheat in summer.

So, in the spring and fall, you’ll find that Fido and Tibbles have upholstered your furniture and carpets with acres of fluffy hair. Not so your betta fish. There’s simply no requirement for a coat change in the stable temperature of a cold-blooded fish’s environment.

So, if you notice that your fish has a few scales missing or appears to be “molting,” all is not well, and there’s a problem that you need to address.

Why Is My Betta Shedding His Scales?

So, what causes scale loss in betta fish?

Probably the most common reason for an active fish to shed or lose some of its scales is due to some kind of physical injury.

As you know, bettas are also known as Siamese Fighting fish, and there’s a very good reason for that! Bettas are fiercely territorial, aggressive fish that just won’t tolerate any interlopers on their patch. So, you can’t keep two male bettas together, or they will undoubtedly fight, often to the death.

In their native Thailand, formerly Siam, betta fish owners once bred Plakat bettas to fight and bet on the outcome of the contests. Even the King of Siam had prized bettas and was an active supporter of the “sport.” Thankfully, these days, pitting betta fish against each other in contests is illegal in most countries, and bettas are bred purely for their beauty and value as beloved, ornamental pets.

However, the betta’s territorial instinct remains to this day, resulting in skirmishes in a community aquarium. The degree of aggressive behavior varies between individual fish. Some bettas are super-chill, peaceful fish and keep to themselves, whereas others are extremely feisty and will pick a fight with any other fish that gets too close.

So, if you notice any confrontations taking place or you have a particularly belligerent betta, our advice is to remove him to a fish tank of his own, perhaps with a snail or a few shrimp for company.

Bettas are prized for their glamorous colors and incredible finnage. Unfortunately, that spectacular trailing caudal fin that you love so much is somewhat of an encumbrance to your betta buddy.

Betta fish are typically not the most agile or speedy swimmers, and if you have too much flow in the tank, your pet might be buffeted around quite a bit. That can result in your betta crashing into rough objects within his tank, potentially suffering physical damage and dislodging a few scales as he does so.

Bettas are very easy to breed in the home aquarium, especially if you don’t keep a community tank.

All you need to do is keep one male betta and a small sorority of females in the same tank, and nature will usually take its course. Your male betta will build a bubble nest, and once he’s paired off with one of the ladies, spawning will probably occur.

Bettas have quite a complex courtship. To start the proceedings, the male pursues his female around the tank quite vigorously. As matters progress, some friendly nipping often happens. Love bites are pretty typical in betta courtship and are usually nothing to be too concerned about.

However, bettas of both sexes have tiny teeth that they use in the wild to grab and keep hold of water-bound insects and other items of food. So, if things get too passionate, there is the danger that one or both of the courting couple will lose a few scales.

Sometimes, common aquarium fish illness like bacterial and fungal infections can cause a betta fish to lose a few scales.

Your diseased fish may lose a few scales randomly from his body, or the scale loss might occur in large patches. In some cases where parasites, such as Ich or flukes, are involved, the betta might rub or flick against solid objects in the tank in an effort to stop the irritation that the parasites cause. That can easily dislodge a few scales, too. 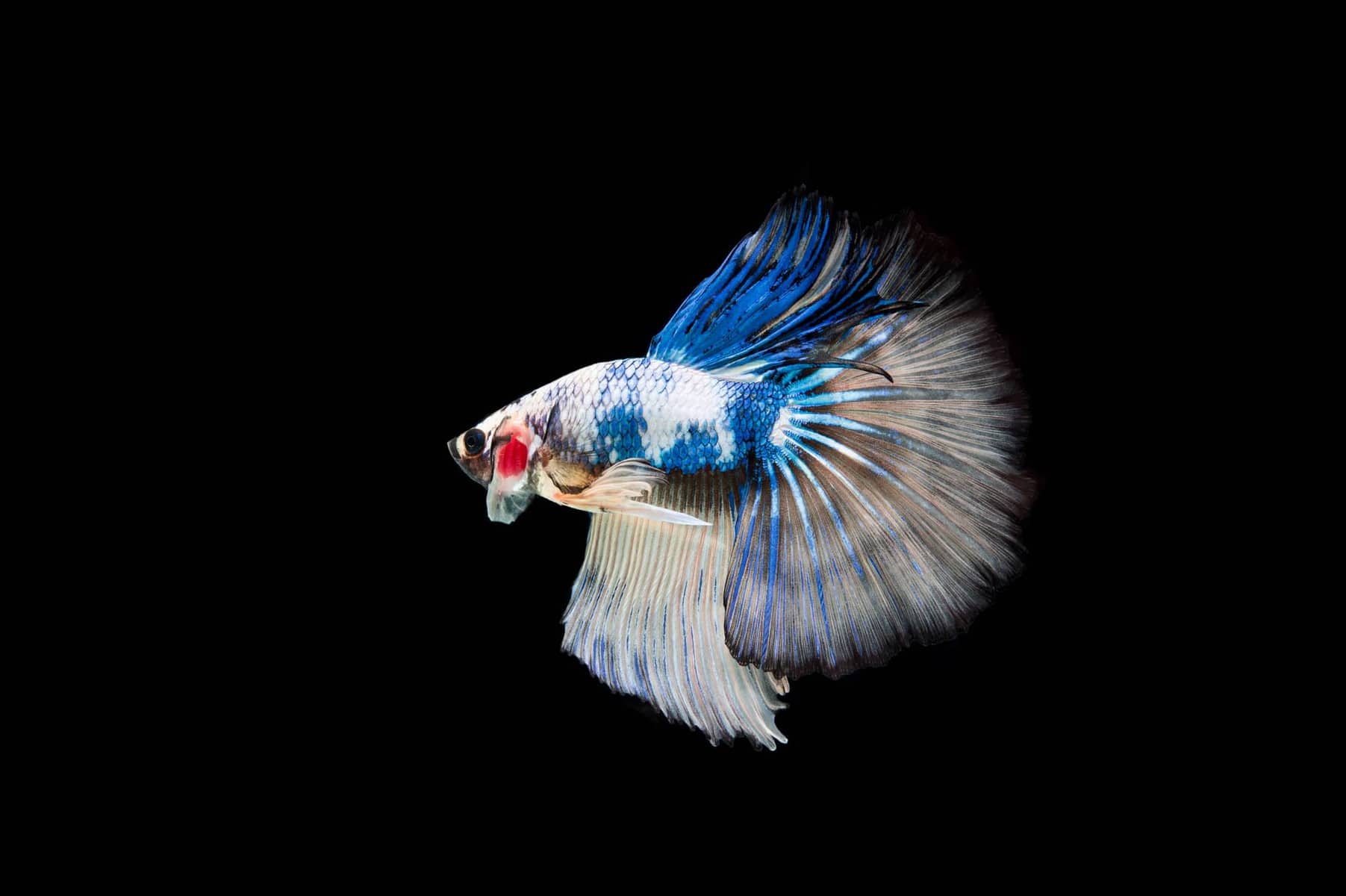 The condition is caused by bacteria and initially presents with similar symptoms to dropsy in that the fish’s scales stick out like a pinecone. As the disease progresses, the fish begins to lose its scales. Affected bettas also show labored breathing and usually become very lethargic, spending most of their time lounging around on the substrate or hiding away in caves or underneath plants.

Fortunately, most minor fish diseases can be treated with an over-the-counter medication available at your local fish store or from your vet.

How To Prevent Betta Scale Loss

The prevention of scale loss depends on the cause of the problem.

If your betta is fighting with his tank mates, you’ll need to move him to a tank where he can live alone or with a few harmless invertebrates.

Similarly, if a lovestruck betta is getting injured during spawning, you might need to remove his girlfriend as soon as the female has laid her eggs. Bettas are excellent parents, guarding the nest, eggs, and newly hatched fry until they are free-swimming and independent. You need to remove the betta or the fry at that time, as cannibalism is not uncommon, and you don’t want dad to make a meal out of his kids!

Bettas are pretty hardy, resilient fish that don’t generally succumb to many fish diseases. However, if your betta’s immune system is weakened, he will be more susceptible to bacterial and fungal infection.

Poor tank water conditions lead to a compromised immune system. So, to keep your betta buddy safe, you must maintain his tank correctly and keep water parameters stable. Carry out regular water changes of around 20% every week, taking care to vacuum the substrate to remove organic waste so that it can’t rot in the tank and pollute the water.

Every month or so, rinse the filter media thoroughly in dirty water so that the media doesn’t get blocked with slime and sludge. That ensures good water flow through the filtration system, keeping the water clean and safe for the fish. You also need to replace spent filter media periodically in line with the manufacturer’s directions.

Will My Betta’s Scales Grow Back?

Yes, your fishy friend’s scales will grow back eventually. That said, if your betta is seriously sick with some kind of infection or disease, there’s no guarantee that all the scales will regrow.

Depending on the individual fish, its age, and the reason for the scale loss, the scales can take weeks or months to grow back.

Bettas do not naturally molt or shed their scales.

So, if you notice that your pet is losing his scales, that’s usually a sign that all is not well with your betta buddy. First of all, make sure that none of your betta’s tank mates are responsible for the problem. Once you’ve ruled that out, check your tank carefully for rough or sharp objects and remove them if necessary. Look carefully at your betta for signs of fungal or bacterial infection and treat your fish accordingly.