Although betta fish are much too aggressive to be kept with other male bettas, they can get lonely and bored if kept alone.

So what fish make good tank mates for bettas? Well, the best companions for betta fish are small, peaceful fish that won’t hassle your betta and nip his beautiful, flowing finnage. Plus, all the fish who share the aquarium must be comfortable with the same water conditions.

In this article, we find out whether or not cherry barbs meet these prerequisites. Are they good tank mates for betta fish? To find out the answer to this — and any other questions you might have — read on!

Is my betta too aggressive to live with tank mates?

Just like people, betta fish have very different personalities. Some bettas are chilled-out dudes that love to spend their time relaxing on a hammock or sleeping on a flat leaf, only moving to the surface when it’s feeding time. These guys tend to do best when kept with a small group of peaceful tank mates. A few active companions can even encourage your lazy betta to get off his hammock and get some exercise!

On the flip side, other bettas are very belligerent and won’t tolerate any other fish in their territories. If you have one of these aggressive betta fish, it’s most likely going to be happier kept alone.

What kind of personality does your betta have?

Before you introduce any other fishes to your betta tank, you need to work out what kind of personality your betta buddy has.

Using a betta mirror is one very easy way to determine how aggressive your betta fish is. If you place a mirror alongside the glass viewing pane of your betta’s tank so your fishy friend can see its reflection, it will begin flaring and may even attack the image it sees in the mirror.

Your betta doesn’t realize the impressive, flaring fish it’s looking at is actually itself! Your betta assumes the stranger it sees is another male betta, attempting to muscle in on your pet’s territory.

Now, we know your betta will attack the mirror, but what you need to know is just how violent your fish’s reaction is. If your pet is extremely aggressive, it probably won’t appreciate the addition of any other fish, including cherry barbs, to its home.

Introduce other fish…from a safe distance

If you don’t have a betta mirror, there’s another tactic you can try to see how your betta reacts to the presence of another fish. You’ll need access to another fish tank for this trick.

Position the betta’s tank so your pet can see the other fish swimming around in its separate aquarium. Provided your betta swims calmly alongside the other tank and doesn’t get upset by the extra fish, it’s a fairly safe bet he will be okay with a few peaceful tank mates.

If it looks likely your betta will remain calm and aggressive toward other fish, find out more about cherry barbs to see if these fish would make good tank mates for your betta.

A Cherry Barb and Betta Overview

Cherry barbs (Puntius titteya) are just about the most popular members of the barb family of aquarium fishes.

As you might guess from their name, cherry barbs are a deep red color that becomes even more intense when the fish are spawning. Generally, wild-caught cherry barbs are more intensely colored than their commercially-raised cousins. You can also find an albino variety of these fish!

Cherry barbs come from Asia, specifically the Nilwala to Kelani basins of Sri Lanka. A few small populations of feral cherry barbs have been spotted living wild in Mexico and Colombia.

Are cherry barbs good with bettas?

On the surface, yes, cherry barbs do appear to be good with betta fish. However, some rules need to be followed to make the partnership work, and there are a few things to consider that can make or break the arrangement.

Are cherry barbs good for beginners?

Cherry barbs are great for beginners! These active little fish are beautiful to look at, easy to keep, and suitable for life in a peaceful community aquarium. In fact, although these fish can survive perfectly well if kept alone, they can be quite shy. So, to enjoy the cherry barb’s best colors, you need to keep a mixed group of female and male fish in a well-planted tank with plenty of hiding places; like betta fish, cherry barbs appreciate floating plants.

Cherry barbs are small fish that can live in a small tank. However, if you’re going to keep a group of barbs and a betta, you’ll need a spacious tank for these fishes for two reasons.

As a general rule, when choosing a tank for your fishes, we recommend you allow one gallon of water per one inch of fish. An aquarium that’s 15 gallons, for example, is a fine size for a group of five cherry barbs and a betta.

For any fish to thrive and be healthy, the water in the tank must be kept clean, and the water parameters must be suitable for the species.

Water temperature is especially important, as bettas can be very vulnerable to temperature shock if the water is too warm or cold. Bettas, also known as Siamese fighting fish, need a water temperature of between 75 and 81 degrees Fahrenheit. Cherry barbs like water between the same temperature parameters as betta fish, which is fine.

In the wild environment, bettas live in the very slow-moving waters of paddy fields, ditches, and streams where the lighting is dim. Here, there are lots of aquatic plants, and the substrate is soft and silty.

Cherry barbs also inhabit shallow, calm, and heavily-shaded waters where the light is subdued and shaded by overhanging trees.

If you replicate that environment in your tank setup, both species will certainly be happy.

Note that cherry barbs also eat general detritus and algae, whereas bettas are primarily carnivorous. However, both species will do well on what’s pretty much the same diet.

Can I feed cherry barbs and bettas live foods?

Yes, you can! Both species enjoy live bloodworms, brine shrimp, and the like. However, we would advise caution if you decide to feed your fish live food.

Live food is a major source of bacteria and parasites you definitely don’t want to introduce to your tank. So, we recommend you feed your fish frozen foods instead, which are generally a much safer option.

If you have a large tank, you may be wondering what other fish species make good tank mates for bettas.

Generally, it’s safest to go for fish that aren’t too brightly colored and showy, especially those with flowing finnage, like guppies. Bettas tend to become aggressive toward these fish, probably mistaking them for competitors. However, despite their being brightly colored, bettas generally don’t pick on cherry bettas.

If your aquarium is large enough, you could include a few peaceful bottom-dwellers, like corydoras catfish.

Fish that are known to be fin-nippers are best avoided, which rules out most tetra species, tiger barbs, and angelfish. It’s also best to avoid large, aggressive fish that may intimidate your betta.

Betta fish spend most of their time swimming around in the top part of the water column. As labyrinth breathers, bettas need access to the water surface so they can take gulps of air when they need to. They’re also surface feeders, so they won’t go too far from the top of the tank in case they miss a meal.

To avoid potential conflicts, it’s best to choose tank mates for your betta fish that tend to swim in the middle area of the tank or are confirmed bottom-dwellers. That way, the betta won’t become stressed, thinking other fish are encroaching on its territory.

If you want to add a cleanup crew to the tank to get rid of algae, leftover fish food, and general detritus, add a few shrimp and snails. Some species of these come in beautiful and bright colors, too, adding even more pop to your tank.

Both these species get along fine with both betta fish and cherry barbs, and they make an interesting, useful addition to your community setup.

Introducing your betta to cherry barbs

Since bettas are territorial fish, it’s safest to introduce your betta to the tank after the community has been established. If you put it into the aquarium first, it will most likely view the whole tank as its own and will be likely to defend it against any intruders.

However, by bringing the betta to the party after other fish are already in residence, you will reduce the likelihood of the betta becoming aggressive. It’s more likely the betta will choose a small territory for himself rather than trying to bag the whole aquarium.

Cherry barbs also swim in all areas of the water column, although they spend most of the time in the middle of the tank. In contrast, betta fish generally like to hang out in the upper areas of the tank so they can take gulps of air from the surface when they want to. Also, a greedy betta will want to keep a lookout for food you might drop into the water.

How long do cherry barbs and bettas live?

Bettas live between three and five years if you care for them properly and feed them a nutritious and balanced diet. Cherry barbs generally live up to four years, but they can live longer, depending on the quality of the care they receive. 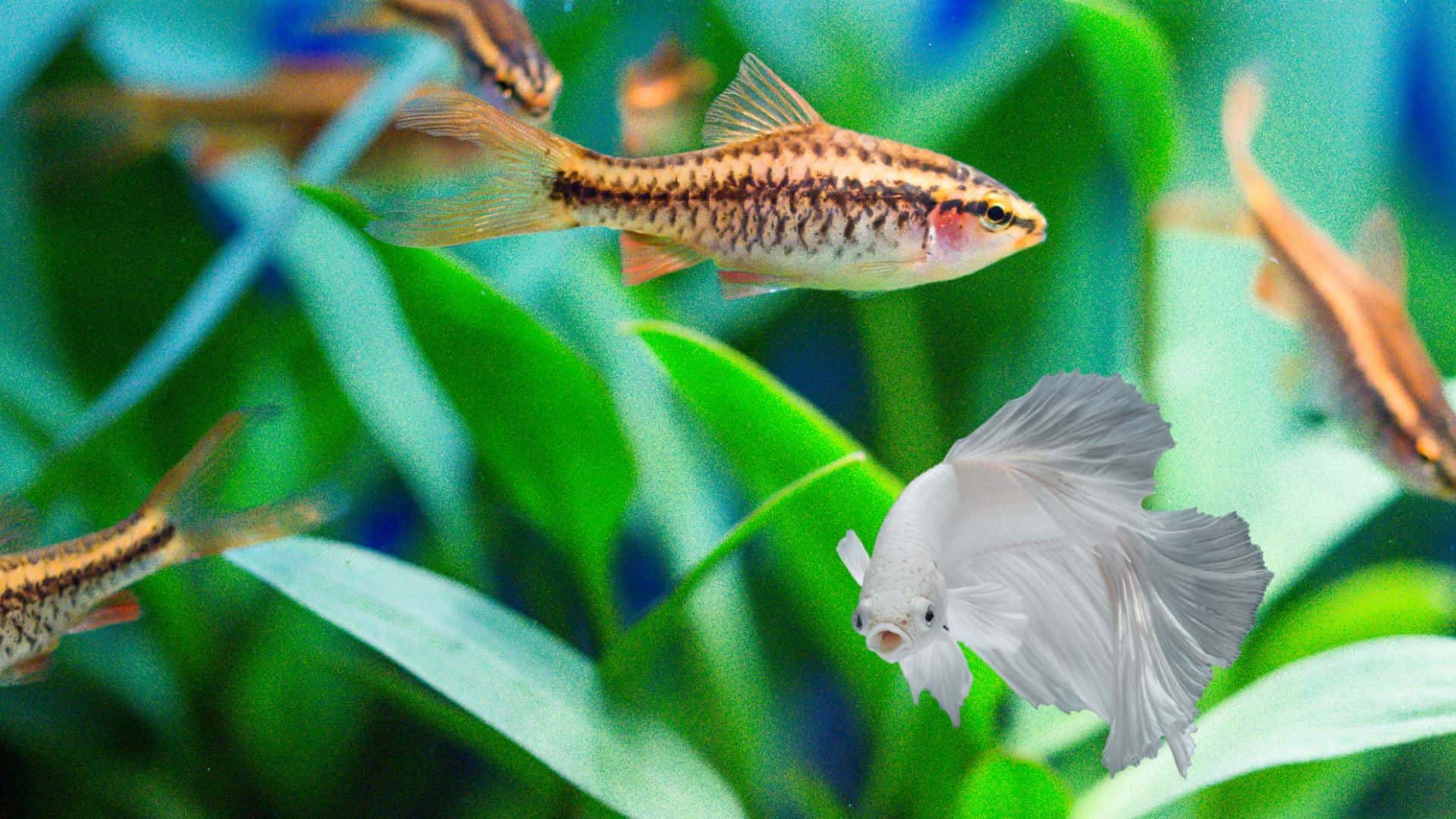 Are bettas and cherry barbs the same size?

Betta fish can grow to reach a length of around 2.5 inches, although some individuals can grow even larger than that. When mature, cherry barbs grow to be around two inches long.

Both fish are of a similar size, which is important if the betta is to feel secure in its territory and not intimidated by its tank mates.

Of the two species, cherry barbs are probably the hardiest. That said, provided you create a safe environment, both your betta and the barbs should enjoy good health.

You will need to maintain the tank properly by carrying out 25 percent partial water changes every week and replacing filter media when required. A nutritious, varied diet is also crucial for the fish to remain healthy and show their best colors.

If you have a lonely betta fish, a small group of cherry barbs will make good tank mates for your pet. Both species like the same water conditions, can live in a small tank with the same decoration and lighting requirements, and eat a very similar diet.

To be as sure as you can that your betta won’t attack the cherry barbs, try setting up the community tank before introducing the betta. That way, the betta won’t regard the newcomers as competitors.