While it may be tempting to want to pet your fish, it’s not such a good idea. Betta fish should never be touched by human hands. Doing so could lead to all kinds of problems such as stress, disease, or in the worst case, mortality.

A betta is best kept on the other side of the glass, away from your hands, and enjoyed instead with your eyes!

Let’s have a look at some of the reasons bettas should never be touched and also some alternative exercises you could try to connect better with your betta.

So You Heard Somewhere That You Could Touch Fish?

Well, you can – with some larger species – but not with bettas! Bigger, more robust fish like koi carp can become very inquisitive of their owners and even rise to the water’s surface to meet their hands. They may enjoy being gently petted and feel the caring attention of their owner.

Bettas are very different. Some people describe bettas as a ‘nano fish’ – they only grow to 3 inches at most!

To them, your approaching hand would look how we’d see an eighteen-foot giant’s hand coming to pet us – probably pretty terrifying! And even if that giant had good intentions, it’d be unlikely that he’d possess the necessary dexterity not to harm us!

We might be wise to bite his hand or dart for cover, which is just what your betta might do…

Can a Betta Really Bite Your Hand?

Absolutely. If a betta feels threatened, they’ll often use their primary defense – their teeth, and ask questions later.

It’s not that your betta is mean, he’s simply defending his space, guarding his territory. It’s what his inner nature tells him to do in order to live a long and successful life.

If you stick your hand in your aquarium for routine maintenance, the chances are that your betta will try to avoid you altogether. But if he sees your hand coming directly towards him, he’ll perceive you as a threat, and quite likely bite you.

Isn’t this an overreaction? I mean, could my hand really be such a threat to my betta? Well, actually, yes…

How Can Your Touch Damage Your Betta?

Bettas, like all fish, have a layer of slime that covers the scales and protects them from all kinds of bacteria. Think of this slime like our human skin, and the scales underneath like our flesh. If it is removed or broken, it opens up the possibility of infection.

This slime coat was not designed to come into contact with human skin, which is quite abrasive compared to the silky, soft texture of a fish! If you did succeed in touching your betta, it would be very likely that part of his protective layer would be removed.

Just as if a giant’s hand had accidentally grazed your skin, your betta’s open scales are much more likely to pick up an infection.

The chances of infection are also increased by the stress your betta will have experienced through the encounter.

Stress is one of the most harmful factors affecting a betta’s health, appearance, and lifespan. Think like a fish! If you saw an eighteen-foot hand coming toward you, wouldn’t you be panicked and stressed?

Whether your betta decides to bite you or swim for cover, he’ll certainly find any attempts to pet him stressful.

A stressed betta may lose his vibrant color, as well as his appetite, and become sluggish. He may even develop ‘stress stripes‘ or become prone to disease.

A stressed betta will also be more vulnerable to fin nipping and attacks from his tankmates if he has any.

All of this can be avoided if you simply reserve your hands for feeding your betta and cleaning his tank!

A lighthearted attempt to touch your betta may not be fatal, but trying to grab a betta with your hands could send him into shock.

Shock is the result of an overwhelming level of stress caused by a traumatic event. A shocked betta may have a heart attack, a seizure, or any number of other serious reactions.

Can Touching My Betta Fish Kill Him? 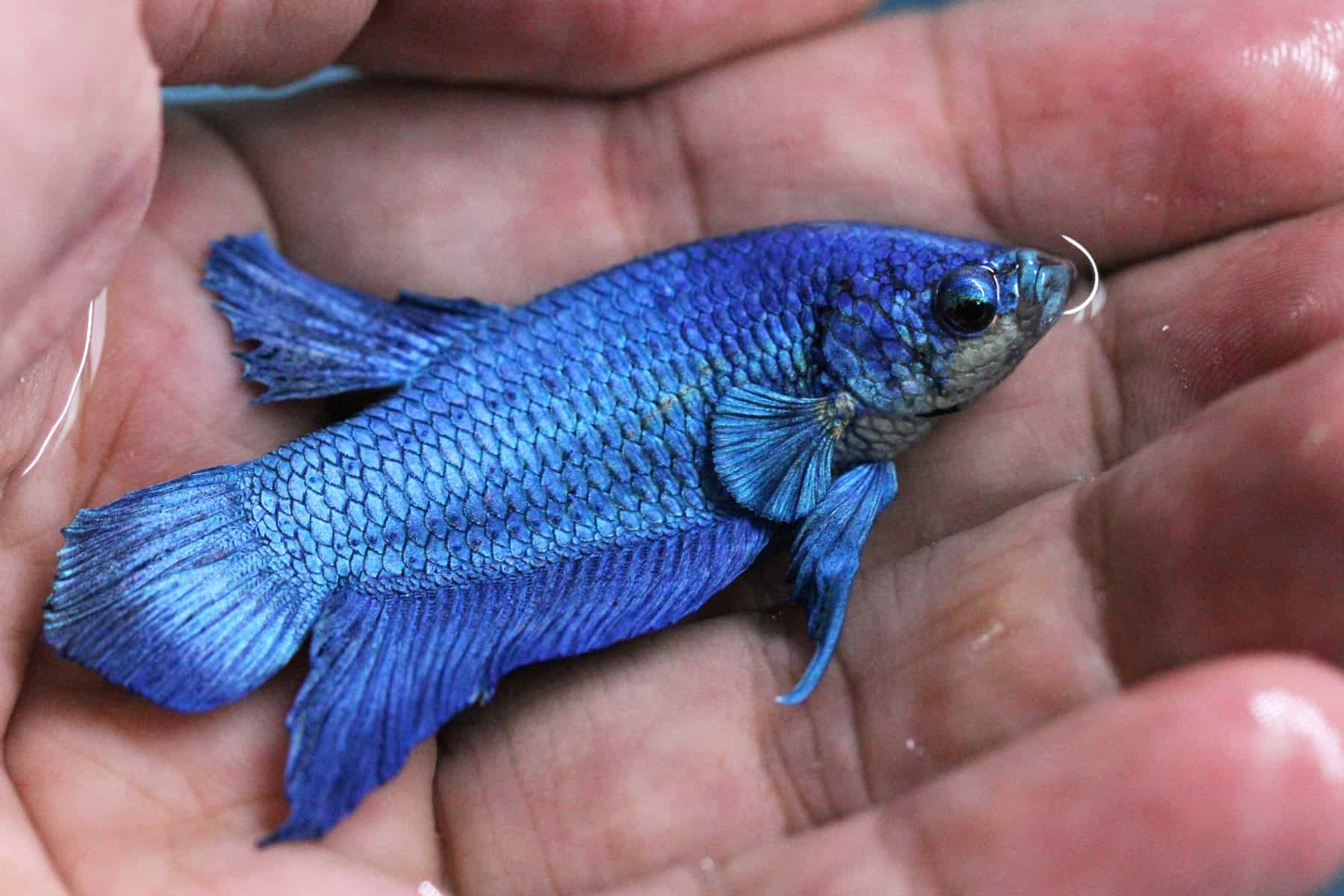 As we’ve said here, handling your betta could harm him in many ways. If you open up your betta’s slime with your hands and your betta dies two weeks later from a bacterial infection, then your touch would be partly responsible for his death.

If you caused him to panic and stress by chasing him with your hand, and he subsequently got bullied by his tankmates and died, you’d be also indirectly responsible for his mortality.

If you managed to grab your betta and forcibly held him in your hand, he could find the experience so overwhelming that he’d go into a deep state of shock and die from a seizure or a heart attack shortly after. In this last case, your touch would be directly to blame for his death.

Directly or indirectly, your touch could definitely kill your betta, in various ways!

Other Ways To Interact With Your Betta

Thankfully there are some perfectly healthy ways for you to interact with your fish that don’t involve direct touch.

Bettas are very intelligent and inquisitive fish that will like to look at you through the glass almost as much as you enjoy looking at them.

This means that they can respond to your behavior, so that interaction, play, or even training can be developed.

In fact, there’s a whole array of ways that you can bond with your betta!

Have Fun With Your Betta’s Tank Decor

It can be really rewarding trying out new items of tank decor for your betta. Think about what type of environment you’d enjoy if you were a betta fish!

See how he will respond to a new aquarium plant, a deep cave, or an elaborate piece of driftwood.

Treat Your Betta To Exquisite Cuisine!

If you’d like to show your betta how much you love him, why not treat him to some exciting and various foods?

If you usually feed him betta fish flakes, try offering him bloodworms or brine shrimp to make him shine. If he’s already used to these, you could treat him to some mosquito larvae or Mysis shrimp.

It’s wonderful to watch your betta light up as his excitement mounts for these new, nutritious foods. He may well treat you in return by showing off his most vibrant colors and elaborate displays.

Read our complete guide to the best foods for your betta here!

Play With a Mirror

Some pet stores now sell betta exercise mirrors, which will give your betta the impression that there’s another fish in the tank with him.

Since males will fight with any other male that enters their territory, a mirror gives your beloved betta a chance to flare his fins and show off his natural fighting instincts, while ensuring nobody gets hurt.

It’s important to note, though, that having their fight reflex triggered all the time will cause unnecessary stress to your betta. For this reason, we’d recommend only offering the exercise mirror a few times per week, for just 30 seconds at a time.

You can even train your betta to perform various exercises and tricks, usually by rewarding him with food.

A simple way to start this is to get him to follow your hand (from the other side of the glass!) up to the top of the aquarium. Once he’s followed your hand all the way to the top, you can reward him with some of his favorite food. Bloodworms are great for this!

Similarly, you can also train your betta to swim through hoops, around obstacles, or even jump out of the water!

Of course, it’s important not to overdo this kind of training, or force your betta fish to perform. But a little bit of playful interaction like this could be not only great fun for you but also offer healthy stimulation for your betta.

There Are 101 Ways to Enjoy Your Betta, But Touching Isn’t One of Them!

With the risks of physical injury, stress, or shock to your fish, and the threat of a bitten hand for you, please remember never to touch your betta. The only time your hands should go in a betta’s tank is for routine maintenance and proper care.

If you wish to bond better with your fish friend, try out some of the fun ideas we’ve suggested above. Done correctly, you’ll both have a good time without either of you getting stressed or injured in the process.

You may even have a more healthy and handsome-looking betta as a result!