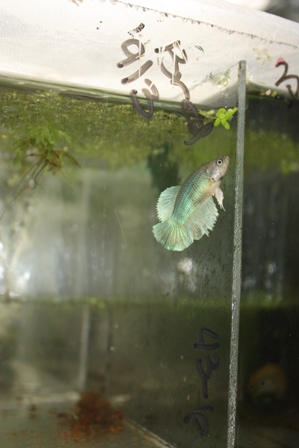 After you do a few spawns and have fish and tanks everywhere, how does one go about keeping straight what is in where? How do we know what fish is from what spawn? The answer is dry erase markers. Everything from tanks to beanies and barracks, the dry erase markers go on, stay on and rub off easily without any residue. I personally like the ones that are like a pen, they have a clicker at the top to put the marker out for writing then click.. back in it goes.

One way to use the markers is as spawn identifiers. Spawns are marked on their spawn tanks with the id numbers of the fish that are being bred. For example 44-A x 43-2. Things to include with the breeding pair is the date you get eggs. You can add four days to that for the free swimming date most people use for the spawn date. If you have spawn numbers you will want to add that too.

The individual cells or containers can also be written on. When breeders are removed from the spawn tank and returned to their homes, mark the date they were bred on the front of their cells or containers so they get plenty of rest before they are spawned again. Once the fry are moved to the larger grow out tanks, just transfer the spawn information to the side of the new grow out tank. If small spawns have been combined, both sets of information will go on the tanks.

You can also use them to write notes about fish so you don’t forget something. Say you have a real pig and they get a bit bloated. Just write FAST on the front and you don’t feed them by accident. When you have some really nice ones coming, a smiley face in the corner denotes your favorites.

As fish are pulled from the grow out tanks they can be given an id number. For me that number consists of their spawn number, a dash and either a number or letter. Males get letters and the girls get numbers. They are done consecutively.. so the males in the picture come from spawn 44 and are the first three males pulled. But you can create your own system and just mark the fish accordingly.

Keeping up with fish id’s is not they only way to use these markers. Come show time the markers are great in that you can write their entry number on the front of their cells or containers. Just go down the rows of barracks or containers and put consecutive numbers on the fish you decide to send to the show. You can also add a code like a plus or minus depending on if the fish are coming back from the show or are going to the show’s auction. This can all be done before creating the entry form. When you are done deciding who is going to the show, grab the entry form and just enter the fish on the line that corresponds to the number you put on their cell. Then, when it is time to bag fish for the show, just go numerically down the line. Once the fish are shipped, empty spaces with a minus on the front are quickly filled with other upcoming fish and those with the plus you keep the space open for those returning.

So you can see it is pretty easy to have hundreds of fish and keep everything straight. Other methods have been tried, but they do not work as well as a dry erase marker. When you want to get rid of or change the markings they are very easy to remove and leave little if any residue behind. If you get marks that won’t come off just color over them with more marker, and it will dissolve the old mark and wipe off easily. Compared to other methods that have been tried for keeping everybody straight.. this is by far the easiest and the markers last even breeders with a lot of fish several months.