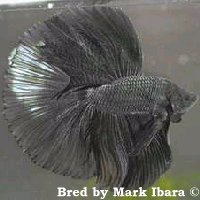 Melano black bettas are the true black bettas. A mutated gene has caused the black pigment to be greatly increased coverage area (melanism).

The mutated gene (m) is recessive to the normal black gene (M). This means that when a melano black betta is spawned to a normal betta that does not have the mutated black gene, all offspring would look like multicolored bettas. These offspring are carrying the gene for melanism and are called melano-geno (Mm), however they are not distinguishable from normal multicolors. These recessive characteristics become visible in the offspring when both parents carry the mutant gene.
The melanophores from melanos grow very differently from that seen in black lace and wild type. They pile up and are very sticky, which is why they produce such a dense black. Melanos have a lot of speckling throughout their fins that that make them look so dark, these are actually ‘balls’ of melanophores. Preliminary studies have shown that these melanophores have extra adhesion proteins. One hypothesis is that these proteins are also responsible for female infertility. Melano females will produce eggs during the act of spawning like a normal female, but something happens during the hatching process that causes the fertilized egg to rupture.

Because allmost all melano black (mm) females are not fertile, mostly blue females are used to breed melano blacks. Preferably steel females are used because these females posses the least irridescense of all blues. A pairing like this, produces melano-geno (Mm) fish in the F1 generation. When breeding to F1 generation fish together, there is a chance of getting melano blacks (mm) back in the F2 generation. However the blacks from a pairing like this always posses some irridescence on on the body.
There are several reports of melano marble and melano copper females being normally fertile and can be normally used for breeding.