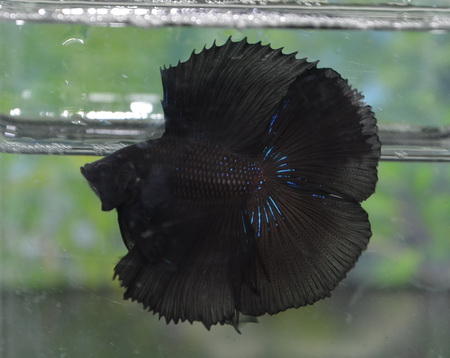 You excitedly bought some beautiful fish and watched as they spawned. You celebrated as your babies hit the different stages of development.. hatching, free swimming, fry and finally you are looking at your Juvies. But you notice the form is off and the colors are not what you wanted. As you look at this first generation you are wondering from what planet they came from and where are the fish you expected? After five  years in this hobby, I can say from experience, this happens more than you would think. Maybe my expectations are higher than most, then again, others have mentioned it too. So the question now is.. what do you do? Do you scrap everything and try again? Work with what you have? If you want to or are forced to work what you have, how do you make the best choice to move forward. 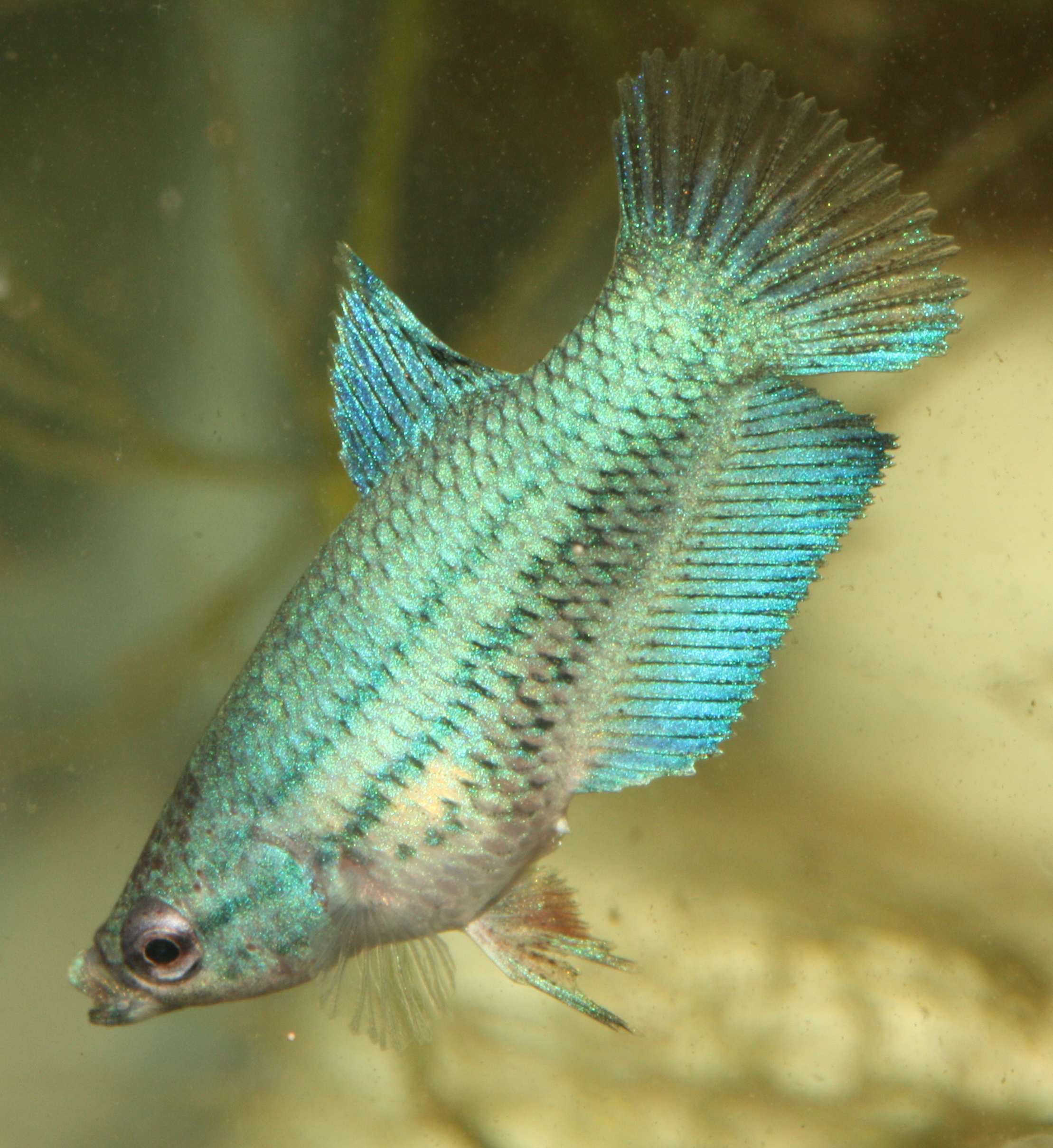 Though tempting to get rid of the spawn and try some other pairs, often this first generation is a shaking loose of the genetic material that the fish are carrying. If you have the resources, you can try another pair and see if it gets you closer to where you want to end up. But often you are right back at square one with less than desirable fish and trying to figure out how to get to the fish you are wanting to breed. So where do you begin to sort through what you have and take a step in the direction you need to be going. You start by eliminating the worst, then over time, increasing the best.

I currently have three spawns where I am not thrilled with what I am seeing in the Juvies. My CT’s have bad top lines, bad color [wanted red and have dirty Cambos] and have an assortment of rays and reduction. The black HM’s I did two spawns.. had two sibling pairs and crossed a male from one to the female of the other. Then did opposite for the other cross. The results were the DT male gave me nice broad dorsals but most of the fish are super deltas, not Halfmoons. The HM crossed to the DT female gave some more branching, but there were also deltas and they did not have the wider dorsals the other spawn showed. Their balance was mostly ok, and the color in both spawns is dark with the typical blue irid on the body and some lace type patterns. Both traits though not ideal, are workable.

So how do I move forward? I am a breeder, so I love breeding the fish and seeing the improvements as the generations pass. My attitude is all I need is two good fish. Yes it is nice to have some to show, and always great to have some to sell to support the hobby. But my main focus on a new line, or even an outcross, is getting two fish with good enough characteristics to move forward. Remember you have to get rid of the worst, then increase the best. So to move forward, when you have a real mess and a disappointing spawn, you have to look hard at your results in light of the standard they must meet, and determine what fault is just every where. The reason for this is, if it is in most of the fish, it is pretty ingrained and I want to start right at the beginning to select against it. Then as the line moves forward you start to see less of that fault and more of the characteristics you desire become apparant. When the faults become minor you end up with a greater selection of possible breeders and can then really select for the traits you desire. 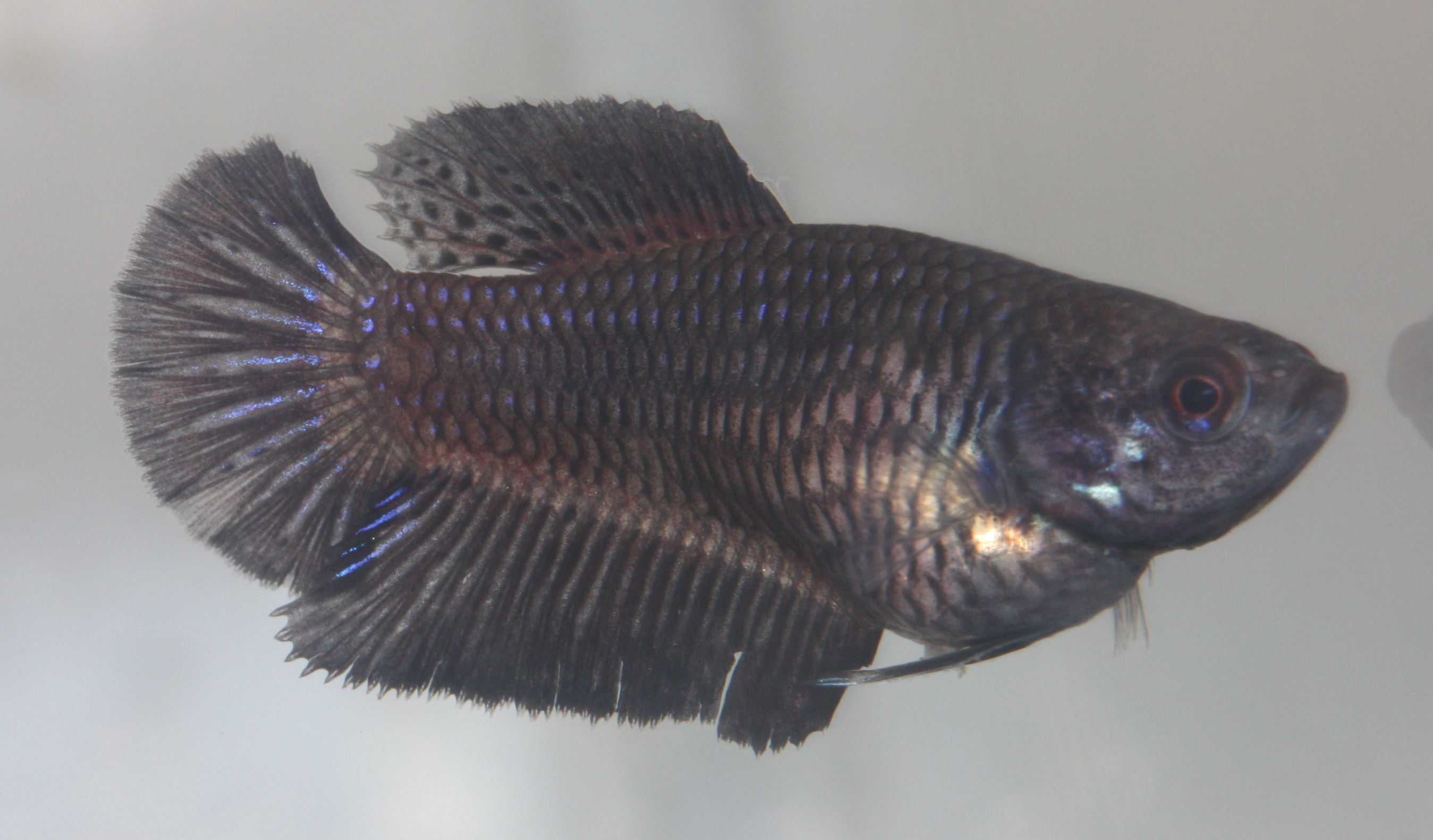 In the black spawns I have a real hodge podge of form, everything from delta to HM. To maintain a good HM line, branching must always be considered and selected for. I like my females to have eight rays and the males 8-16 rays.Since this cross threw a lot of deltas, branching is going to be a huge factor in the selection process for both male and female in this line.

I started my selection process by really looking at the females. I am a firm believer in females make or break the line. They contribute a lot to the equation and you will never be able to buy the really good ones. Only way to get good females is to breed them yourself. If your females are good you will end up with good males and a great line. So looking at the females in both black spawns, I have females with various degrees of branching. Some only split to 2 rays.. others four and still others 8. The females with eight rays or more are being pulled to grow out and will be the only ones selected for breeding. I hate sloped anals so will remove any with this trait from further consideration as well. During this time they are also being evaluated for color, balance and aggression. All things equal I am going to prefer the females with the wider dorsals for breeding. 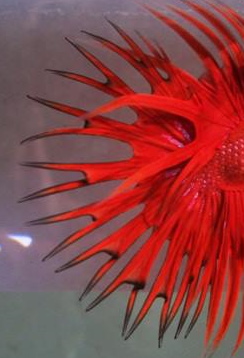 In evaluating the faults of the CT’s, I determine the finnage was a real mess. What is important to me in the CT is a HM 180 spread on the outside rays, rays as long as the dorsal and anal rays, good reduction and consistent rays in how they split. What I saw in this spawn was tail rays splitting into two rays right at the reduction, rays splitting to two after the reduction and rays split to two here and three there. With any tail type it is all about symmetry, so the inconsistent two and three ray branching was not an option. So in this spawn I was going to select against irregularities in the splitting of the rays. Once again I looked at the females. I chose those that had the widest spread, and each ray splitting into two. I also looked for good web reduction. I pretty much am ignoring color in this generation. I wanted reds, but as typical, got red males, splotchy red males and the Cambodian type females. I will take a generation or two to fix the type and then start to bring the color around.

Now that the females have been chosen it is time to take a harder look at the males. Again, they will be evaluated in light of the fault I am selecting against. I have some lovely black super deltas with great color, but they will be making people a very nice pet. The ones with full HM spread and good branching are the only ones that will be considered for breeding. Once I have selected for the most branching, then they will be evaluated for color, balance and aggression. Again the preference will be any male that is expressing the wider dorsal base from the DT in the bloodlines.

In the crowntails I have quite a bit of variation in the types of branching and ray structure, even once the odd branching is selected out. Spread is another big thing to me so that was the next selection criteria. I chose males with really good spread then looked at the ray length, and selected again for good tail length. I want to be able to connect the ends of all the rays and have a silhouette of a HM. CT’s need to be just as balanced as a HM, and have good web reduction on top of it all. Again we are looking overall balance and aggression as additional selectors. 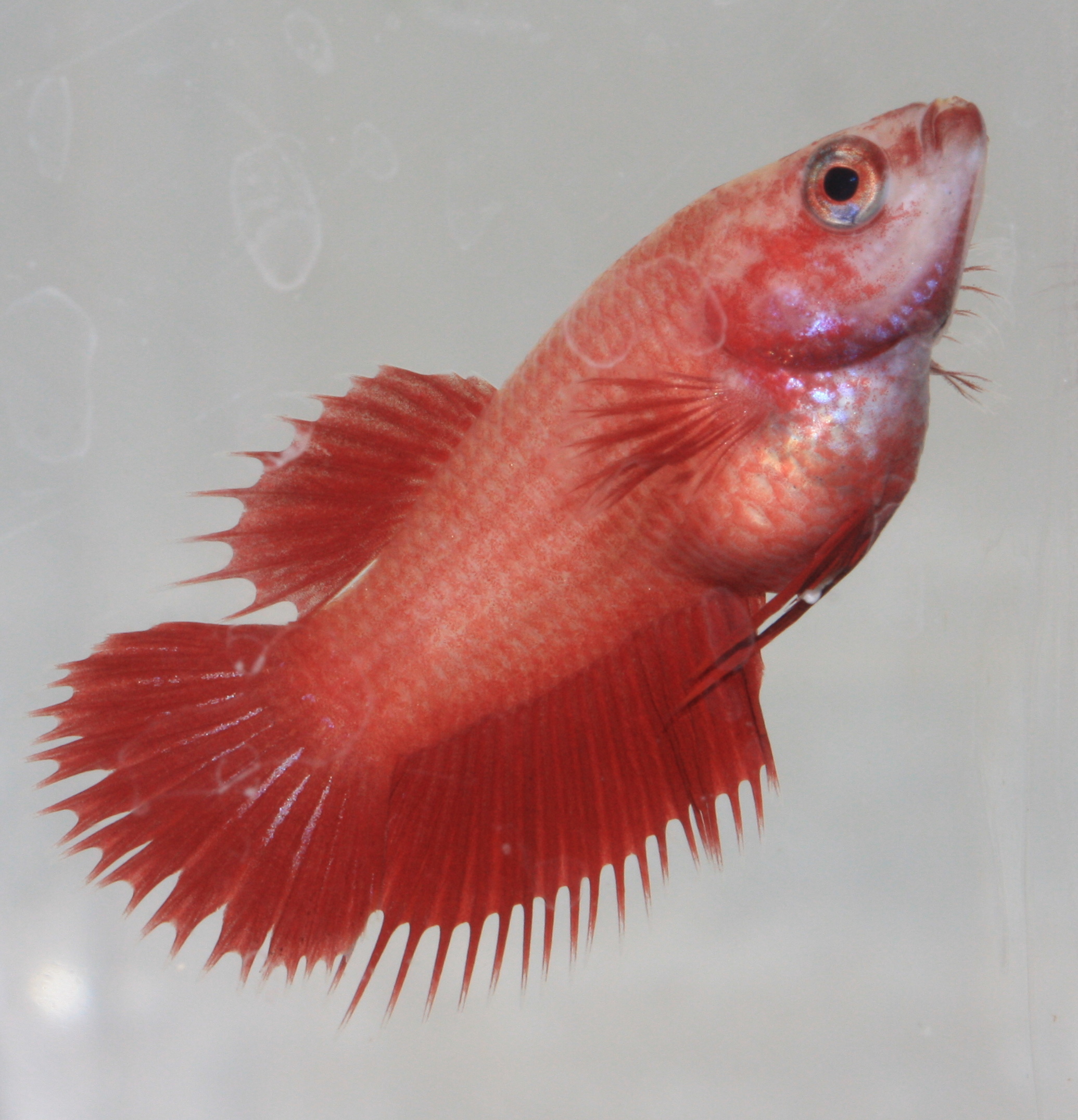 The final selections are now being made in both the CT and Black HM spawns for breeding. What are my expectations in the next generation? In the Blacks I expect to see a greater percentage of offspring with good branching. I hope to not see any deltas, but figure will probably get a few. I do expect the deltas to be gone by the third generation. The color should still be good and the balance pretty close to my ideal since the first generation was not too bad off there.As the number of fish with acceptable branching increases, I will then select for balance and color. I am expecting to see more my *type* around the fourth generation.

The Crowns are going to be a bit more difficult to get where I want. Where the blacks have given me good color to maintain, the CT’s need both form and color improved. This is also a new tail type for me to play with. I am not familiar with how dominant or recessive the different ray branchings are, so will be watching that going forward as well as I develop my type. I do expect to see a little more consistent branching in the next generation with some decent spread. From that group I will then select on color after they have been selected on spread and branching. I want reds, but I may have to take the line to a clean bicolor. It will all depend on what I get in this next generation. I do not expect to be happy with this line for at least 6 generations because there are so many variables that need adjusted. At two spawns a year, this is three years out. 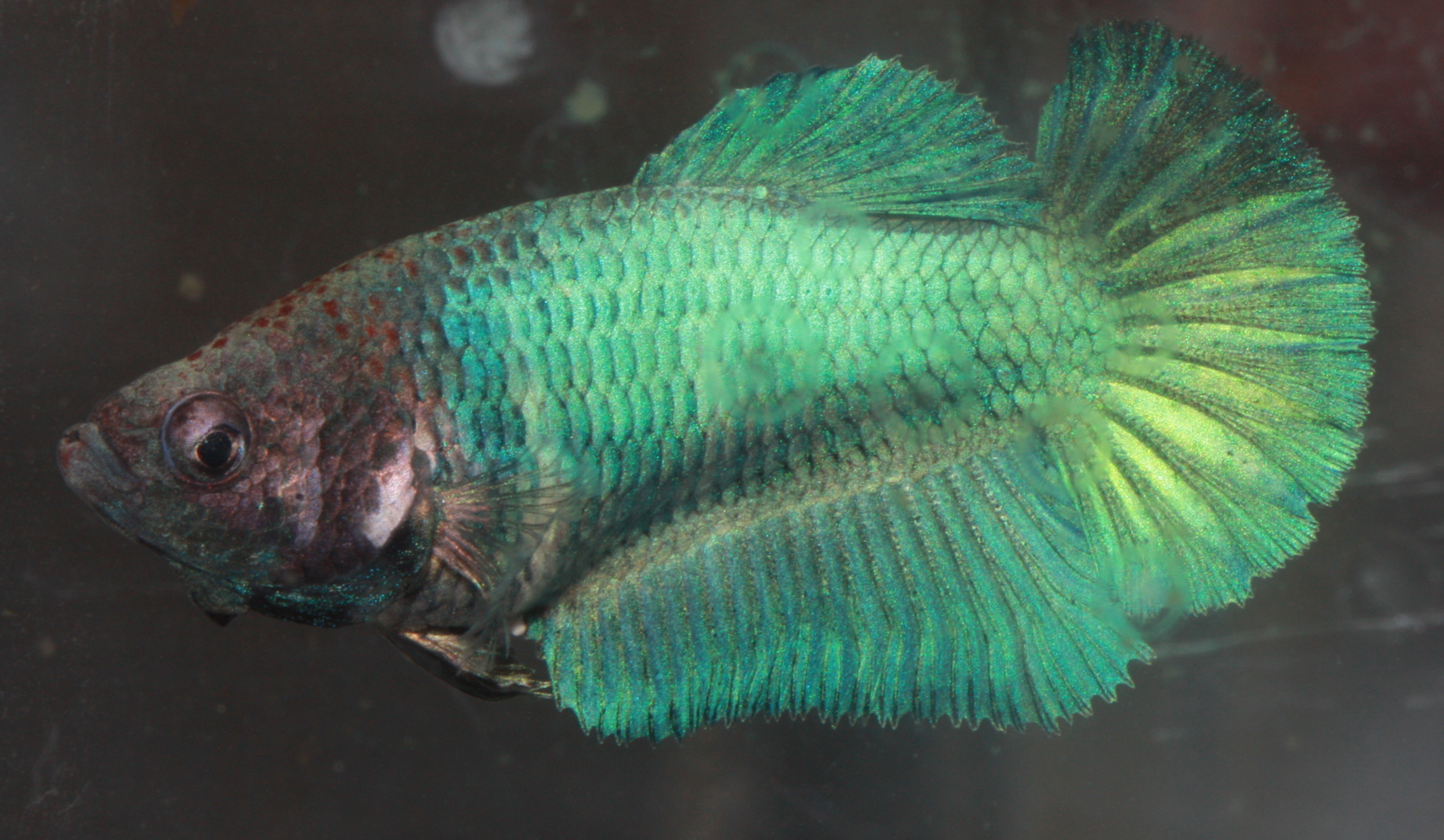 As these lines progress I will be sending fish to shows and putting them up against the standards and other fish being bred to see how well we are doing. Both lines are going to be a several year project to bring them to a consistency my metallcs now show. In a spawn of over 100 fish.. ALL were consistent in form and color and that is my goal. But that line has been a five year journey.

Breeding quality bettas is not a sprint, but rather a marathon. Some will experience instant success.. but often will not go the distance and lose what they have. It is the distance runner with a plan that will end up consistently producing quality fish that show well. So, as you now look on your ugly ducklings, do not despair. Determine what to get rid of, see the hints of what you want and just take it one step at a time.