For most breeders, AquaBid is the source for breeding stock. When you see that great fish you feel will be a perfect addition to your breeding program, how do you get the best value for the money you are about to spend? With the average fish being $30 and then another $45 to get him to your door in shipping charges, you can see it is wise to do a little digging before you hit that BUY button.

To make the most of your over seas purchase, there are a few extra things you can do to make sure the money you spend is well spent. After several generations of line breeding, your out cross should be carefully considered. And if you are just starting a line, getting stock that will produce what you see in the fish you are considering is going to be important. One of the ways to evaluate your purchase is to see what other fish have come from the spawn. That perfect fish may just be the lucky combination of all good traits in the line, or the result of a careful breeding program that has good traits in a good portion of the offsrping. If you can view possible  siblings and they have several undesirable characteristics, you need to consider carefully before introducing those traits into your line.

So how do you get to see sibling fish of the one you are considering. You can contact the breeder and ask for photos, but chances are they will not go through that much trouble. But often they have posted at auction several fish, and you just need to click on the link that shows all the auctions currently offered by that breeder and look for possible siblings in the current auction offerings. At the top, click on the link for thumb nails. Using thumb nails is really the only way to shop AquaBid, or you will miss the good ones and rabbit trail on the Fancy Monster Masked Show Quality fish you want nothing to do with.

Once you get the thumbnails you look for fish that are similar in color and type to the one you are considering and go over them with a fine tooth comb, looking for faults. I save all the photos so I can pull them up side by side if necessary to compare. Ideally, I like at least three fish to see if a trait is dominant or ingrained in the line. However, if you only have one more, it still gives you much more info than just looking at the one fish you want to purchase and is worth serious study.

When you are working a solid line, you want to see the best colored fish you can and you want to see the sibs also well colored. Look for solid color edge to the fins. Blues will often have white or black edges, in reds you often see clear and black edges. If you are breeding black fish, often the edges will be clear. Good specimens in these colors do not show up often, but if your line already has good color in the fins, then you need to carefully consider introducing a fault trait into your line. There must be outstanding form on the fish you are considering to bring color faults to a line that does not have them. These color faults are heavily penalized at the shows and are not the easiest to breed out.

To a lesser extent, off colored ventrals are also seen. Red in blue fish and white tips in the reds and blacks. If all else is good on the fish, I can live with with the off color here and work towards better coloration by using a good female, then watch future generations and cull heavy.

Patterned fish have more lee way as a fish with a good showable pattern may not produce offspring with patterns you can show. A good Butterfly will throw fish that have the ideal 50/50 color separation in the fins, but you can also get 25/75 or 75/25. You will also get marbles in the offspring. Some will have the good 50/50 balance of color and flesh desired in the shows, others will vary from mostly solid to colorless save a few freckles. You should know this variability of the gene if you chose to work it. Nice thing is you can get solids, butterflys and marbles in the same spawn and have the ability to enter several classes. But, you can also get a lot of fish that will not be competitive as well.

Multi colored bettas ideally have three colors that are pretty evenly distributed on the fish. You do not want a blue fish that just has really bad red wash. A good multi will also not have a butterfly type pattern in all three fins. If it does, it should meet the butterfly standard with clean seperation of color as that is the class the fish would be moved to for judging. The Salamander color, that is popular now, often has a thin, white edge on all three fins. This is a BF pattern and would be moved, and would not be very competitive. So when desiring a good multi, look for lots of color without a defined pattern.

When you look at patterned fish, ideally you want to see a number offered with a showable pattern. Does the breeder have four Butterflys offered with a great pattern? Chances are you will get a good number as well. Are the Multi colored fish varied or do some have a pattern that may show up in your fish?

When considering a fish for breeding, you want the best form you can get. The Halfmoon, long or short fin, should have a tail that looks like the letter “D”. The outer rays should be long and straight and open to at least 180 degrees. From there the tail will come around and form the rest of the “D”. The top should be mirror image of the bottom. Often you will see the bottom is not as big as the top. Note that as a fault.

Look at the rays. They should be thick and sturdy and branch well. Look for every ray to branch at least 8 timens. That means the ray divided into two, each then divided to give four, and each of those again split to produce eight end points. Look carefully at the outer rays, as often they have less branching than them middle rays. Really watch for this in your females. Again, note any faults.

Toplines should be smooth, a nice arch from nose to tail. Dips in the topline may be environment, but may also be genetic. You are paying close to $75 for a fish, so get a good bone structure. Examine the scales and make sure they all look even. Misaligned scales show up with some heavy branched lines that get into rose tail and are to be avoided.

Dorsals should be well branched as well. I also like to see some width at the base here as well. Ideally I want to see ten rays or more, showing some Doubletail in the genetics. It also gives a nice balanced look to the fish. At least half of the dorsal rays should branch to give good fullness. Look at the first rays on the dorsal. A common fault is short, stubby rays here. It is difficult to get fish with out this fault, so not a deal breaker. But it should be noted, especially if you are breeding fish that have better length in these rays.

So lets take a look at some recent auctions and evaluate the fish and decide if we want to make a purchase. 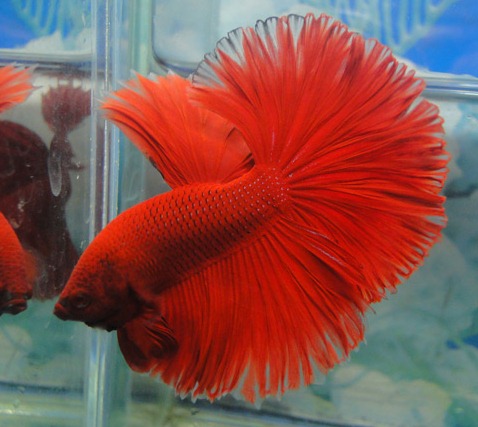 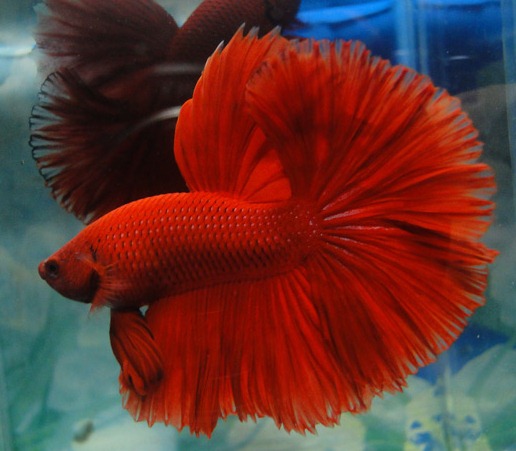 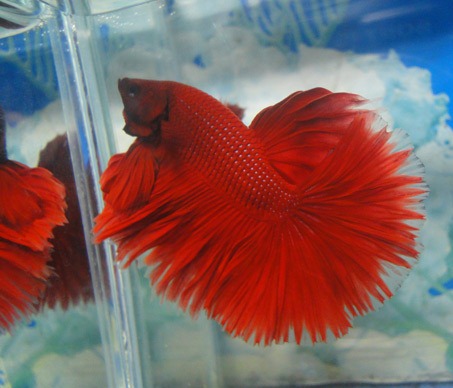 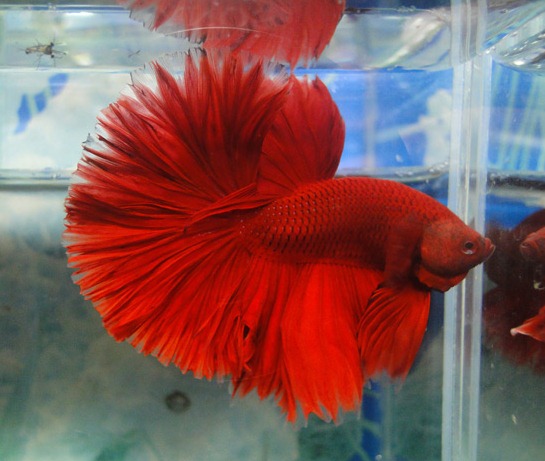 These four fish were offered by Banglean Bettas at about the same time. It is hard to believe looking at fish this magnificent, that they are actually culls for the breeder. They have kept their best, possible shown some of the others, then offer the rest for sale. So when I view these fish I can assume there are some that are nicer. Since this is a solid, we want to really look for color faults.

All four fish are showing lighter clear edges on all three fins. In a show this would be a pretty good fault if the competition has nice solid color to the edges. So, you have to weigh out if you want this in a line to work out. If you are just starting a line, it is workable with careful breeding. If your line already has this issue you need to be improving something else.. possibly form to make this a good purchase. If your line already has good color,  you may want to wait for another male. I bought a sibling male in this spawn and can tell you the clear edges did show up in most of the fish.

For the most part I would consider these all dark reds.. or the old style that has a black pigment layer under the red. You can see some of the scale edges have a thin black line edging them.. typical in the dark red. All four fish have some blue flecking on the body and into the fins. It is an issue with reds and must be bred out. There is not much and the line possibly has fish with even less, so the red coloring on these fish is good.

Form wise, all have great branching and solid 180 spreads with he last male being slightly over 180 degrees. You can count on good branching in the fry with a well branched female. Would not need her to have excessive branching, but good 8 ray branching would be a nice complement to any of these males. Now look for long straight outside rays on the tails. Both #1 and #2 males have shorter rays on the top, giving these males a little rounded edge. The other two fish have good length in these rays so you can assume, with a female strong here, you will get a decent number of offspring with the desired sharp edges.

Dorsals have good branching and volume. Only one of the three has a skyhawk. So it is in the line, but I would not look for it in great numbers in the fry unless the female carries this trait as well. My limited experience with the skyhawks is it is a recessive trait. First dorsal ray is long in all but the #3 male so you can expect improvement in this area with a female that is not bad here. It is a common area to need improvement by breeders and Banglean has done much work in this line to get a good percentage with better than average first dorsal rays.

All but the number two fish have the dorsal tie in well to the tail. Look at that number two fish and you will see the rounded top is what makes the tie in look so bad. This male is the shortest in the top rays, and so ties in the worst. If those outside rays were longer, we would have a much better line there. But two of the four having the desired trait, and one that has most of it, again, would make me still take a chance on the #2 fish if my female and breeding were strong here.

In Summary.. the Solid

So, overall, we have four fish that have pretty good color, form and balance. By looking at all these fish we can make some pretty good assumptions about the possible traits the offsping will produce. And it allows us as breeders to make educated decisions and make the best use of our money when we want to import.

Hopefully this article will help you when shopping AquaBid for breeders. Look for Part Two soon.. where we will discuss patterned fish.